“I remember, Standing by the Wall” (Berlin Bars)

With Raw Wine Week coming up here in the UK, my attention was turned to Berlin’s own Raw Wine in May, when a friend said he was thinking of going over for it. I’ve just come back from a week in Berlin, and I thought I’d share a few bars with you all, just in case you are going too. I can’t claim them as my own discoveries – they came via Dave Stenton, who used to organise the Oddities lunches with me.

There is no doubt that Berlin is an exciting city, and one on the rise. In a sense, it comes as London’s Olympic glow is subsiding, and all too many Europeans I know are leaving. As one person in Berlin sadly told me of an Italian friend of theirs, they are “not feeling it any more”. There’s a lot of building going on in Berlin in the cultural sectors, but at the same time, there feels as if there’s a real influx of young people to the once impoverished parts of the city where the real cultural life seems to be happening, away from the tourist centre.

This isn’t surprising. In the most interesting districts, Eastern Kreuzberg and especially Neukölln, you can find an apartment for a fraction of the cost of the nastiest flats in London, and people tell me it’s a city where you can get by okay on a part time job, leaving time for some more creative pursuits. And there are plenty of those going on in Neukölln.

When people talk about Berlin bars, the first on most people’s lips is Cordobar, but that’s north of the centre, and probably full of tourists. Not that the three bars below won’t be, but they do have the advantage of being in the area around where Raw Wine Berlin will take place. They all share the fact that you will get a very warm welcome. The first two can certainly be called “natural wine bars”, and the third has many natural wines, and a very interesting selection from Germany itself.

Wild Things at Weserstraße 172 is in the heart of Neukölln, between Sonnenallee and the canal…and in fact just five minutes walk from where we were staying last week. It’s rather like a small English corner pub, with a bar room and a separate room with tables. You can eat the sort of small dishes common in Parisian and London bars, and drink a very small selection of natural wines (as the wine list shows in the pic below, just nine wines and a cider last week). We drank the Normandy Cidre from Fournier Frères, and Franco Terpin‘s Quinto Quarto ramato wine from Friuli (in fact, Terpin farms vineyards both in Italy and over the border in Slovenia).

Wild Things was fairly quiet on the days we visited, which gave the staff a chance to chat with us. I was even able to recommend Winemakers Club in London to one of them, who was heading over to DJ in a couple of days. Although you’ll spot some “usual suspect” natural wines as empties dotted around the bar (a large format Gut Oggau or some Partida Creus), don’t expect them necessarily to have any. Just go for the very relaxed, laid back, atmosphere and friendly service. 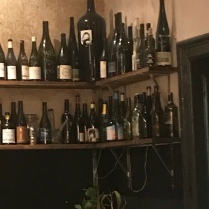 JaJa is also in Neukölln, just off the Sonnenallee at Weichselstraße 7. We went here on Saturday night, without a reservation, and we were quite lucky to get a couple of seats at the bar. The place was humming. That didn’t stop the owners from being extra friendly, chatting to us as they dashed around the tables to serve a multi-national clientele.

We drank 2Naturkinder “Kleine Heimat” 2016. It’s the first vintage of this skin contact (10 days) Silvaner, so my first taste, and it’s delicious. It comes from a vineyard at Rödelsee, quite close to the winery, and one of the few actually owned by Melanie and Michael. Then we moved on to Alsace (JaJa seems to have a good selection from the region at the moment), with Jean Ginglinger Riesling Cuvée Bilh (from Pfaffenheim’s Steinert vineyard). Somehow some Banyuls appeared as we were paying the bill. Friendly hospitality of a very high order here.

You can eat at JaJa. The menu on the board doesn’t look much, but people were definitely getting an assortment of plates that I couldn’t see listed. Useful, because I could see myself settling down here for the night. Several nights, actually. 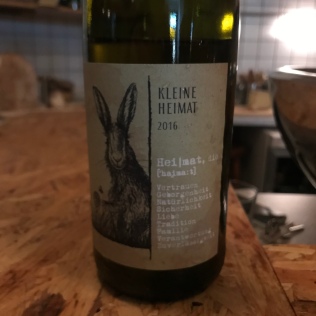 Ottorink is a bit further northeast at Dresdener Straße 124, quite close to Oranienplatz. We approached from the Kottbusser Tor U-Bahn, and we had to resort to Google Maps to lead us through the shopping centre to find Dresdener Str. This is the Turkish district, which was in full jubilatory mode because the journalist Deniz Yucel had just been released from prison in Turkey.

Ottorink was founded by “Otto” (see photo below), who has a story so typical of many in the last century. Moving to Alsace as a child, he was forced to leave after WWI, when the region was returned to France, because he had been born in Germany. In WW2 he had to fight in the German Army, whereas his uncle, who had remained in France, had been conscripted into the French Army. One is never far from the reasons why the European Union was created when in Berlin.

Ottorink is less comprehensively “natural wine” focused than Wild Things and JaJa, but it does have an excellent and fairly wide selection of wines from which to choose. It is probably also fair to say that it is the most sedate of the three, but no less friendly.

We drank a refreshing orange wine made by Weingut Nigl from the heart of Kremstal, Austria. We noticed they had a good selection of bottles from the Pfalz producer we visited in October 2017, Fritz Becker (highly recommended). The selection of dishes on offer at Ottorink is perhaps a little wider too. 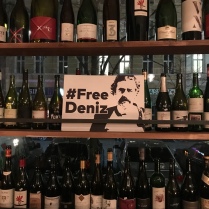 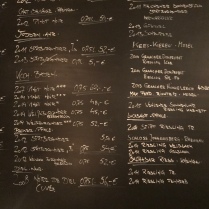 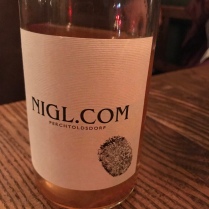 Berlin is a great City to explore, and for people like us, an even greater one to dine in. My family is vegan, but the two places I’m going to mention below will appeal to anyone.

Brammibals not only sells the biggest selection of vegan donuts I’ve ever seen, but also the best donuts I’ve tasted, vegan or not. They also make the only vegan cheese toasty I’ve ever had where the cheese drips out of the bread. It’s a bit of a Neukölln institution. 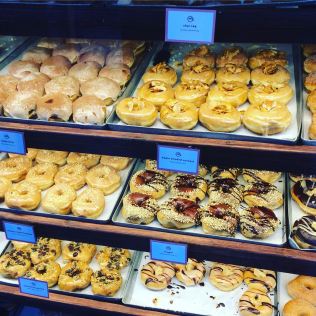 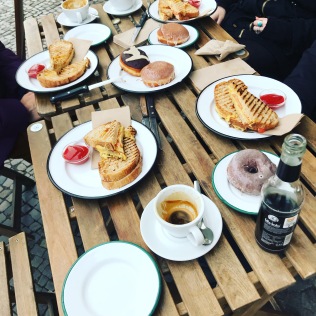 Soy requires a trek out of Neukölln, to the area just north of Alexanderplatz and the Fernsehturm, to Rosa Luxembourg Straße. It’s a Vietnamese restaurant, right opposite the famous Volksbühne Theatre. No meat available, but brilliant food. Best to book on the weekend.

Naturally Berlin is full of things for the Tourist, but here are three offbeat ideas for places I really like.

East Side Gallery is a section of the old Wall which stretches over about two kilometres, and is covered in graffiti art. Easiest to get to (5 minutes) from the Ostbahnhof, follow the wall along the banks of the Spree eastwards until you hit the Oberbaum Bridge (where you are close to the well known boutique Michelberger Hotel, which is where I’m guessing a fair few Raw attendees will be residing).

The DDR Museum is on the banks of the River Spree just opposite the Cathedral (by Museum Island). We wandered in here one evening, on a whim, and thoroughly enjoyed it, especially the mock-up rooms and the Trabant. Fans of Goodbye Lenin will certainly enjoy it.

Grunewald is a large forest to the west of the city, accessible by both U-Bahn and S-Bahn (the suburban lines). You can combine a trip there with a visit to one of Berlin’s best small art galleries, the Brücke Museum (German Expressionism from the early 20th Century, including works by Kirchner, Schmidt-Rottluff, Heckel and Emil Nolde). It’s then a short walk through woodland to the Jagdschloss (where there is a cafe) and the Grunewaldsee lake. It’s where Berlin’s residents go to walk their dogs, and it does provide a bit of fresh air if you want to get out of the city. The other popular green spaces are found in the Tiergarten Park (west of the Brandenburg Gate) and the gardens behind Charlottenburg Palace.

My final tip – Get a Berlin Transport Pass (from the Berlin tourism desk at the airport). Berlin’s U-Bahn, suburban trains, trams and buses integrate so well. Once you get used to hopping between them, the city is simple to navigate. A Pass costs about €30 for seven days, so it not only makes financial sense, but saves the faff of finding change for the machine each time you hop on a tram.

Even Berlin has vines 😉