Having got to know Ben Walgate and his wines over the past year I had been itching to make a visit to his Tillingham Vineyard, within sight of Rye in East Sussex. I finally got a chance just over a week ago and I was able to take along Tim Phillips, aka Charlie Herring Wines (this is Tim’s label he set up for his South African range – Tim learnt his winemaking over there and has been producing wines from South Africa whilst setting up his Hampshire facility). This enabled two stellar winemakers, both doing similarly exciting and innovative things, to meet. Both love experimenting, both are developing some boundary pushing English Sparkling Wines, and both are supplementing their wines with cider projects.

Tillingham is in its early stages of development with vines going in this year (current wines are made from bought-in fruit from a nearby producer) and big plans for the outbuildings on the farm. These range from a small hotel and on-site restaurant, to woodland walks and more qvevri. It’s all quite different to Tim’s very small scale walled garden vineyard and orchard, but the one thing which links these two quite different personalities is that they are both making fantastic drinks. With three other wine personalities making six of us to share the fun, we were allowed an extensive tasting of what they are both making at the moment.

Tillingham – The Vineyard and Winery 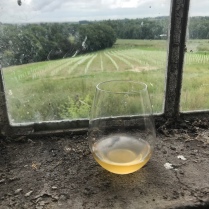 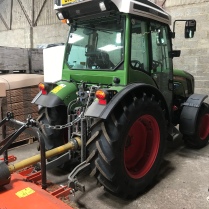 You can see from the photos that Ben is using an array of equipment for making his wines, experimenting in so many ways (he built his own cool storage room to look after the sparkling wines). The wine he’s opening in the top left photo is a case in point. It comes from the fruit harvested from the climbing tree vine in the middle of the photos. No one has any idea what it is, but Ben harvested a load of grapes from it. The resulting wine is just fresh and tasty, though it won’t be commercialised. The guy with the cap (second row, far right) is Tim.

The large derelict room (fourth row, far right) is on the top floor of one of the outbuildings, and will become the restaurant. All plans have been completed and planning consents obtained, and finance is in place. Ben hopes that the restaurant and hotel/rooms will be completed within the year.

I first tasted the Qvevri Cider at the London Wine Fair, and when we were at Tillingham it was days away from labelling. It’s a fantastic product, with the texture of a qvevri wine overlaying apple fruit. It’s made in one of the two qvevri in the photo below, but there’s only 200 litres of it. The other qvevri (400 litres) contained Ortega, which Ben has just bottled. He also plans to expand his collection of these sunken pots, imported directly from Georgia.

The little buggy was just big enough for us to pile into for a jaunt among the vines. Recent planting was carried out by an experienced team from Romania, with a little help from a team from Les Caves de Pyrene and Red Squirrel Wines. Around three-and-a-half thousand vines went in, including 500 Gamay plants, 200 Chenin, Pinot Gris and Ortega. More classic varieties include Chardonnay, Pinot Noir and Pinot Meunier.

Ben also planted a block of Madeleine Angevine, an out of favour Loire variety which makes crisp, dry, slightly floral wines. It appealed to Ben because he has been able to obtain plants on their own rootstock.

Viticulture here is part-biodynamic, with preparations made on site (Ben plans to restore the loft above the qvevris for drying plants for the bio preps). Winemaking follows a natural path with very few interventions. 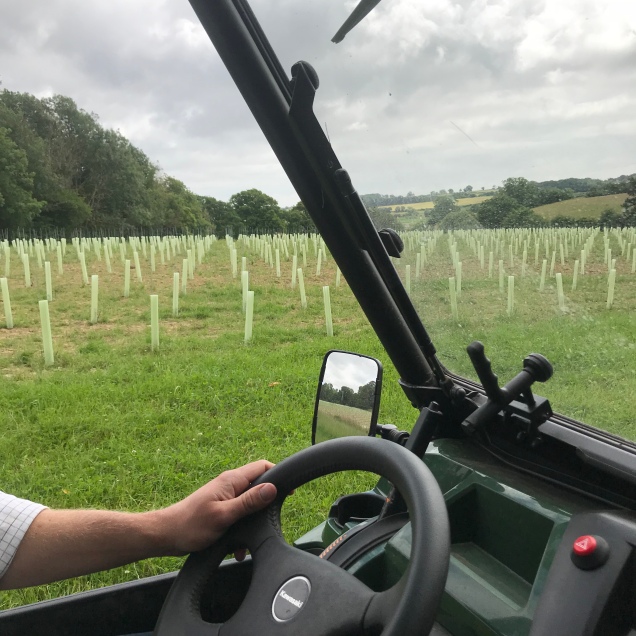 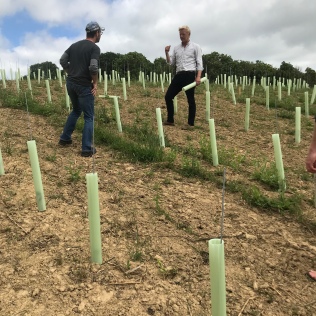 Whilst out in the vineyard Ben opened a bottle of the Tillingham Qvevri Ortega which will be released soon. We were the first people to taste it from bottle…including Ben. There is also a barrel aged version (second fill oak from Mercurey), but the clay-aged version is magnificent. There has been a real buzz around this wine ever since people started tasting it from the qvevri. It aged seven months on its skins and a thin layer of flor formed on the top of the liquid, giving it a slightly nutty note. For Ortega it’s almost profound, and certainly very good indeed.

Only 490 bottles were made, and they were filled on Ben’s inert bottling line, with no added sulphur. It will be called Artego because the vines from which Ben bought grapes did not go through DEFRA’s PDO Quality Wine Scheme for English and Welsh Wines, so cannot carry the varietal name “Ortega”.

Next we tried Ben’s Chardonnay, intended for ageing in bottle. It comes from three different clones and was aged on gross lees in barrel (sourced from Nyetimber), with batonnage, before going through malo. This is pretty oaky right now, not surprising as it was bottled just a week before we visited. It will need a good year or two, preferably longer, for the oak to fully integrate but it shows enormous potential. What matters is that the fruit is great.

The first of Tim’s drinks was neither a wine nor a cider, but a beer. Tim is in the process of getting his brewer’s licence so he can’t sell this yet, but he’s made an amazing beer from wild hops on his property near Lymington and growing by the roadside. Strange Brew is a sort of Christmas Ale, around 7% abv, but not heavy, very fresh and fruity. The only issue with wild hops is a lack of acidity, so Tim added around 7-to-10% of his 2013 cider (hence the name, which is also a deliberate musical reference to the Cream song)…job done.

This is fantastic, with depth, texture and body. Tim is bottling it in Champagne bottles, with some going into magnum (I’ll warn you, Tim loves magnums). I’ve already ordered one of those, hopefully to pop at a party some time next year. 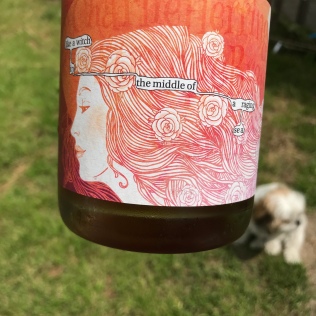 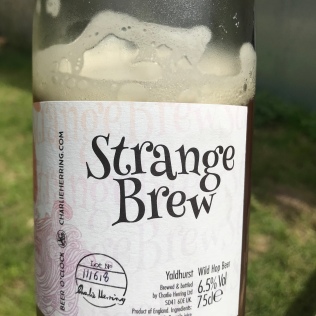 Tim is making cider in the same mould as Tom Shobbrook (funny that Tim knows Tom), but whereas Tom blends wine and pear cider, Tim is using apples and wine (hence the name). The result, Perfect Strangers, is fantastic, fruity with a nice winy finish. The small addition of  wine doesn’t drown the apple fruit. It continues the label homage to artist Tom Phillips’ 1970 work, A Humument, where he took a secondhand book and drew, painted and collaged over the pages, whilst allowing randomised words of the original text to show through in order to create a new story. This cider creates a new story for English craft drinks, and it’s hard to see anyone bettering it.

The new Starvecrow Natural Cyder is delicious, and is certainly fresher than the last bottle from the previous batch I drank recently. That was nice but this batch is a good step up, with the stark freshness of a new bottling. As I have already mentioned, it is made from an unusual combination of Golden Delicious and Jonagold varieties, with some Braeburn, and Bramley adding acidity. It’s a wild cider, made from indigenous yeasts, then aged in those old whisky casks we saw above, and bottled unfiltered (so that unless you stand it up and pour carefully, it will be cloudy, which would be my preference for pouring). 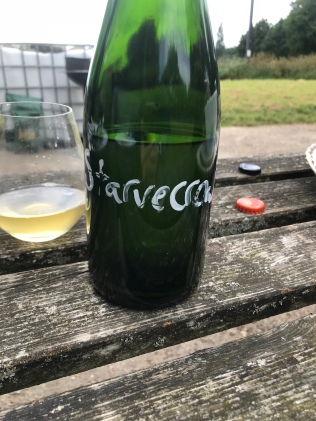 What we were unable to taste was Ben’s wonderful PN17. This is a petnat made from Dornfelder, with a small addition of Pinot Noir. Dornfelder is an underrated variety, certainly for sparkling styles in England and Wales. Bolney Vineyard, near to me in Sussex, makes it as a brambly sparkling red. Ben made a deliciously precise but fruity pink, but all that is left are the few bottles you might find in select retailers supplied by Les Caves de Pyrene. Be swift! 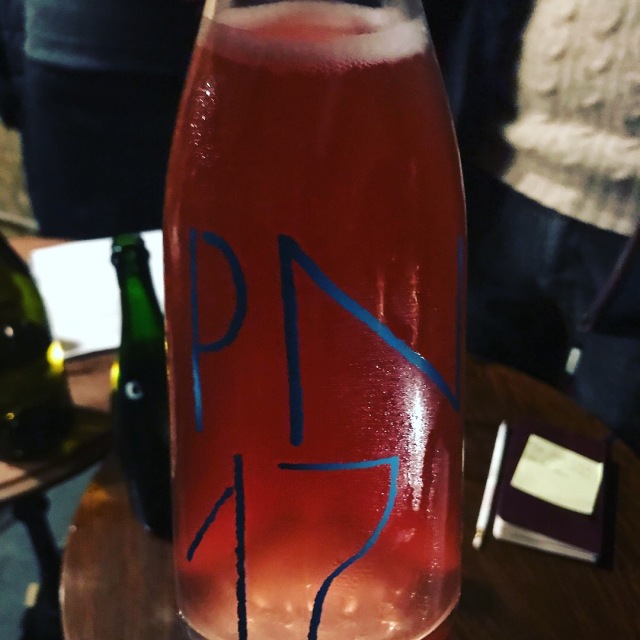 Tim brought along two of his bottle fermented sparklers. A 2013 Chardonnay The Bookkeeper (which alludes to Tim’s alter ego in accountancy) has finally reached the stage where he deems it possible to release. I say deems, he showed this at his recent open day and the batch that had been disgorged sold out. As a zero dosage wine it’s pretty fresh and linear, but very much in the blanc de blancs style. I believe another batch is on the way.

As you can see, Tim’s labels are exquisite. The Bookkeeper actually features a chainsaw because Tim sees himself as far more at home performing outdoor tasks in the vineyard and orchard. No less exquisite is the wine in the bottles. Some prefer the Chardonnay, but my own personal favourite is his sparkling Riesling, Promised Land. I tasted this before dosage and in fact I suggested to Tim he think about releasing a batch as a brut nature. But this one, with I think he said around 6g/litre, is delicious. It’s a minor miracle to find Riesling in England, but the brick walls of the Victorian former kitchen garden create a microclimate which allows the variety to ripen.

Another case of regulatory precision means that Tim cannot label this as “Quality English Sparkling Wine”. Riesling is apparently not a permitted variety for that particular designation in England and Wales, only the three “Champagne” varieties conforming. In this case, I can assure you, the quality is remarkably high. It retains Riesling character with a rapier-like backbone of acidity, enlivened by Tim’s wonderfully ripe fruit. 11% alcohol seems to be just right. 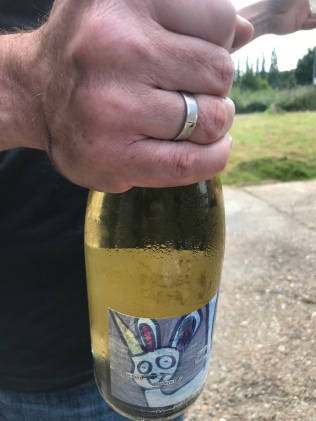 We all had a wonderful morning, capped off with a barbecue lunch – local lamb provided by Ben, along with a great cheese platter and home made apricot tart, washed down by a couple of reds brought along by one of the participants (including a stonking Songlines Syrah 2004 from McLaren Vale).

Ben is shaping up to become one of the stars of English Wine. Of course, Tillingham as a vineyard and producer is in its early stages of development here. What Ben makes is only available in tiny quantities right now. He’s putting in a lot of vines. But what sets Ben apart from most (not all) English winemakers is a desire to experiment. It’s in his DNA. So long as there are people like him to push at the edges of what English wine is doing, then the industry will progress. It needs the innovators alongside the big name producers.

Ben is largely represented by Les Caves de Pyrene, although Butler’s Wine Cellar, Plateau and Ten Green Bottles, all in Brighton, have stocked the ciders and PN17 petnat.

Tim’s beverages are of no less a quality. With a full training in winemaking and a lot of experience (which included a formative spell with Julian Castagna in Australia among others, and a spell with the Riecine crowd in Tuscany, from where he knows Tom Shobbrook), Tim has the viticultural and winemaking scientific background which allows his risk taking to be calculated. Tim farms organically, using a range of biodynamic preparations (a subject on which he is highly knowledgeable), and uses natural winemaking practices in the cellar.

The main difference between the two, I think, is that Ben has a very outgoing personality and is a great people person. Tim is a little bit more reserved, though still very personable. He often says he wants to be “the best winemaker you’ve never heard of”. But I think he is coming around to realising how good his wines are, and the consequent need to get them out there. He can easily sell the vast majority of his production from the cellar door, but he’s now allowing a handful of his wines into select retailers (Solent Cellar, Winemakers Club and Ten Green Bottles should have some bottles arriving during July).

You will certainly hear a lot more about Ben and Tim over the coming months and years.