Tongba, A Study of Emptiness

Tongba (also variously spelt Tongpa, or तोङवा in Nepali, and roughly translating as “emptiness”) is the drink of the Limbu people of Eastern Nepal, but despite some vigorous arguments on the Web, it is also commonly known as Tibetan Hot Beer. Whatever its origins, in Kathmandu you’ll find it being drunk by Tibetan people as much as by Sherpas and other Nepali people. Some people confuse it with another Nepalese drink, Chaang, but Chaang can be made from a wider selection of cereals or grains, and is served in a very different way. People may also tell you that actually it’s the drinking vessel that’s called a Tongba, and the liquid is called Jaand. But most people just refer to Tongba for both.

Tongba is unusual is so many ways. First, it is remarkably portable. It’s made from fermented millet grains which are cooked and cooled, then mixed with murcha, which contains yeasts. I suppose it ferments, over a couple of weeks, more like a bread dough than a wine, as it isn’t mixed with any liquid at this stage. This means that the grains are only damp, and can be carried around almost dry.

When it comes to imbibing, a good quantity of the fermented grain is put inside a Tongba container, traditionally wooden like mine, but sometimes metal. The container is then filled to the top with boiled water and left to steep for about five minutes. It’s then ready for the journey to begin!

I say journey, because everything you’ll read about this drink suggests its very low in alcohol, some say around 2%. Everything points to an evening that’s anything but rowdy. As a first timer you may be counselled to sip it slowly (through a metal straw, blind at the bottom end so that you don’t suck up the grains). When you reach the bottom and have drunk all the liquid, the container is filled up again. This will probably work three or four times before the flavour, and the alcohol, are exhausted. It’s not exactly potent, like the potato Arak, or the rice wine called Raksi. I’ve had the latter post-trek, and Lonely Planet’s suggestion that it can be like “headache-inducing paint stripper” isn’t far wrong.

You don’t really get drunk in a traditional sense on Tongba, but you feel incredibly chilled and mellow. After a while something more seems to kick in gently, and you might feel as if you are floating on a meandering river, or laying on a puffy white cloud. It’s not exactly hallucinogenic, but it kind of feels mildly that way. The “emptiness” translation seems strangely apt. You may show a desire to lie down somewhere comfortable. It’s probably something to do with the bacteria in with the yeast in the murcha. Some people put it down to altitude, but that’s not likely in Kathmandu, even less so on the South Coast here. Those with more experience than I have suggested it can be surprisingly treacherous, and on Saturday evening the desire to take up a prone position was irresistibly strong. I had pre-loaded with half a bottle of Maximin Grünhauser’s Riesling Sekt, but that’s hardly the same as if I’d knocked back three negronis first. 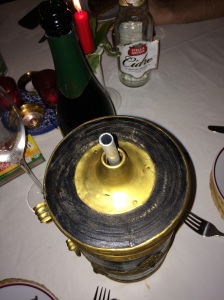 What does it taste like? That’s not easy to describe. It’s mild, slightly milky, slightly mushroomy, with even some bready hints. It doesn’t taste bitter and it’s quite smooth. It certainly tastes nice, and only slightly alcoholic. It’s sufficiently unusual when you first try it to make you a little unsure, but it seems to grow on most people. Certainly, for me, the only thing which makes me wary is the consequence of drinking too much, not the flavour.

In the circumstances I can’t exactly tell you where to buy some, though it’s possible a Nepalese restaurant in the UK might have it. But I will not be drinking it in quantity if I have a long journey home – bound to fall asleep on the train and wake up in a siding somewhere. Certainly seek it out if you are in Nepal, and it’s said to be available in Sikkim and Darjeeling too.

For a bit of entertainment, watch this – it’s a song about Tongba:

What I won’t put up is the video my daughter took…of the moment I sank from kneeling to prone, one semi-graceful slide towards the edge of oblivion.

Now…what did you all get for Christmas…besides the bottle of Baileys liqueur?

Writing here and elsewhere mainly about the outer reaches of the wine universe and the availability of wonderful, characterful, wines from all over the globe. Very wide interests but a soft spot for Jura, Austria and Champagne, with a general preference for low intervention in vineyard and winery. Other passions include music (equally wide tastes) and travel. Co-organiser of the Oddities wine lunches.
View all posts by dccrossley →
This entry was posted in Beer, Nepal and tagged तोङवा, Limbu, Millet Beer, Nepal, Tibetan Hot Beer, Tongba, Tongpa. Bookmark the permalink.

18 Responses to Tongba, A Study of Emptiness