Do excuse my continued obsession with obscure musical puns in the title, and also excuse me writing about something a little different today. Last week I had the pleasure to visit Plumpton College in Sussex. It was only my second visit and my first since the brand new Wine Centre building opened. I was there for a lecture by Professor Barry Smith, going under the title “Why Wine Tasting is Hard“.

Some of you may know Barry Smith from his writing in World of Fine Wine. Others may have come across him as a guest judge on Masterchef, or from Saturday Kitchen, or indeed from his radio work. Professor Smith works at (and is co-director of) the Centre for the Study of the Senses at the University of London’s School of Advanced Study within the Institute of Philosophy.

The lecture was both fascinating and entertaining, and Professor Smith (I’m pretty sure “Barry” would be okay) is very much at ease making a difficult topic both entertaining and easy to understand without dumbing it down. I’m not going to reproduce the whole lecture, though I’ll give you a flavour of it along with a few interesting conclusions, but after the lecture I was treated to a tour of the Wine Centre by the Head of Wine Studies, Chris Foss. I’m sure you will also be interested in hearing about that, with a few photos thrown in.

One of the key questions wine professionals, whether sommeliers, wine trade members or winemakers, ask themselves is why we find wine tasting easy and most other people don’t. In fact many people, including those in popular journalism, are so sceptical of wine tasting that they constantly run it into the ground, and even among the pros there is a certain negativity towards those who take the entertainment aspects of wine tasting a little too far. In many quarters it is certainly seen as an elitist hobby.

What is easy to forget is that wine tasting needs to be learnt. In fact only the other day I read that going on a one-day wine appreciation course can increase spend on wine by an average of 12% per bottle. I can believe that. If you begin to appreciate quality you soon realise that by spending a little more, wine quality can rocket.

Professor Smith gave an apposite analogy about how we can grow to appreciate classical music. First we hear the loud noise of the orchestra as one soundscape. Only with experience do we begin to single out individual instruments and to hear what they are contributing. That is indeed a lot like getting to grips with wine tasting. 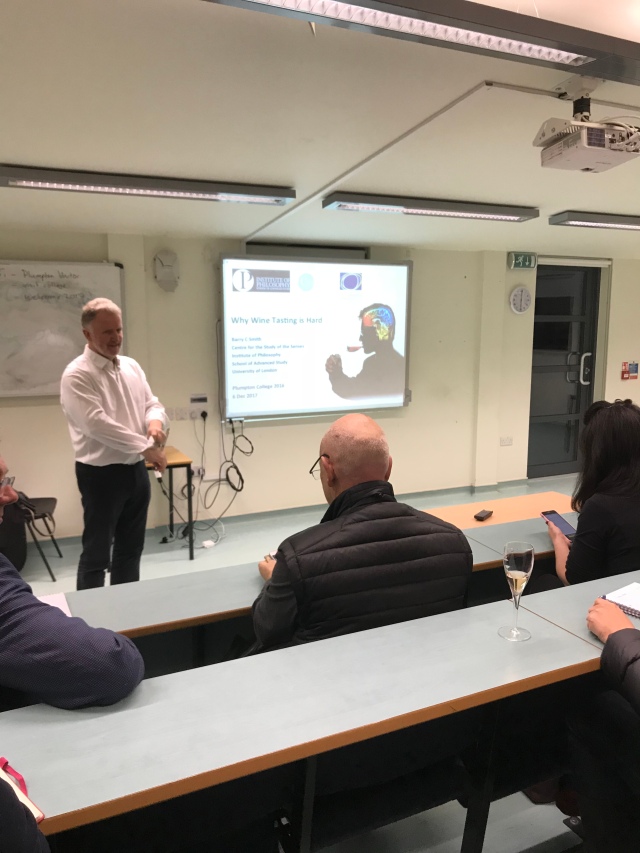 A good part of the lecture looked at the neuro-science aspects of wine tasting and appreciation. The Dijon Hypothesis suggests that everyone does taste more or less the same things in wine, but that some people just don’t know what they are tasting, the failure of reflective cognition.

A study of sommeliers and non-tasters under MRI showed, perhaps counter-intuitively you might think, that it is the non-tasters who show the greatest brain activity when sipping a wine. This is because the brains of the sommeliers are attuned as to what to look for, whereas the non-tasters’ brains are all over the place, trying lots of different pathways to identify something they don’t know.

What we generally more experienced tasters do all know is that wine tasting is based on recollection and building an easily accessible database of reference points, although this does not mean that we can order these in a way that enables us to nail a wine time and time again. This is probably why we get it so blatantly wrong, calling our Rioja a Chianti, or whatever.

The sensory task is to pick apart what the brain has built, and indeed to overcome external factors which impede our ability to do so. Apparently aircraft noise impedes our ability to taste sweet, sour and salt, yet our taste of umami is enhanced. This may well be why some people like to drink tomato juice on a plane but nowhere else, and why you always get tomatoes in airline meals. Apparently Lufthansa provide noise reducing headphones during meals! And apparently the food tastes better!

So when we taste we use all our senses (scientists have identified somewhere between 22 to 33 of them, not just five) in order to build a profile of the liquid, and also to build expectations based on thousands of sensory snapshots. It’s a complicated process. The novice doesn’t know where to begin, and when we start telling them we are getting Madagascan vanilla, cloves, kirsch and leaves rotting on the forest floor there’s no wonder they are confused. But it is clear that even with a little help and encouragement, people can learn to taste. Then it’s just a matter of time, experience and data processing. However, a little time spent teaching the basic skills (and why it is worth acquiring them) benefits not only the individuals, but very probably the wine trade too.

What I’ve reproduced here is a mere snapshot, perhaps even an incoherent one, of this fascinating lecture. If you get an opportunity to hear Barry Smith speaking, I can recommend him. This was the first of the Plumpton Lectures, initiated by Tony Milanowski. In the New Year they have Joe Fattorini, followed by John Atkinson MW of Billecart-Salmon (UK) Ltd, who will be talking about terroir in Burgundy and Champagne. Both look interesting. The lecture I attended cost £10, and included substantial nibbles and some Plumpton fizz.

Plumpton College is the only place in the UK to offer degree level education in a variety of wine studies, from undergraduate Winemaking and Wine Business to an MSc in Viticulture and Oenology. There are also shorter courses as part of the Wine Skills Programme, ranging from an intensive week on viticulture or vinification, to a one day a month option. As I said, after the lecture I was able to take a tour of the facilities at Plumpton, and to find out a little more about what they do.

The Wine Centre has ten staff, including a resident winemaker, with up to a hundred students on the undergraduate programmes and a further twenty or so postgrads. They are thinking of adding brewing, distilling and cider making to the BSc in Drinks Business and Production curriculum.

Tony Milanowski, who I mentioned as the lecture series organiser, runs an outreach programme which delivers around 150 events each year to the UK wine industry, along with wine masterclasses. In addition, pure research is undertaken at Plumpton, for example work is currently ongoing on climate change, including the use of oils to delay bud burst.

Many of you will know that Plumpton is also a working English winery, with about 8 hectares of vines, some under replanting at the moment. Production usually sits around 30 to 40,000 bottles, except that frost and fruit fly (dropsophila melanogaster) dramatically reduced output this year. There are two sparklers and several still wines (red, pink and white blends, plus varietal Bacchus, Ortega and Pinot Noir). 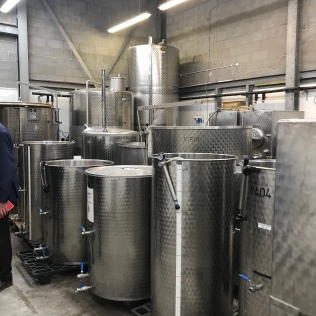 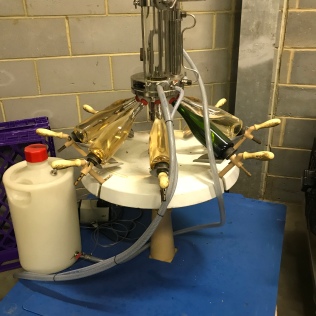 Since 2015 there has been a project on skin contact, with First Contact, a Schönburger left on skins for around ten days (vintage depending), followed by ten months on lees in barrel with weekly stirring. I believe there is an exciting project under wraps to go the whole traditional Georgian hog in the future.

I’m very pleased to say that the English and Welsh wine industry has been supportive of Plumpton. The impressive little research winery was funded by Sussex newcomer, Rathfinny Estate (near Alfriston), where we saw some experimental microvinifications in progress. 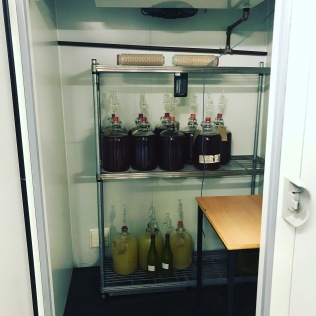 So that was a great two-for-one or BOGOF offer, with the lecture and the tour. The nibbles included Plumpton beef and Plumpton pork, and most people managed a glass or two of The Dean sparkling blush. This is not only very good indeed but remarkable value (£23 from Waitrose Direct or from eight local branches).

Plumpton College has various sites in Sussex but the wine facility is on the main campus at Ditchling Road, Plumpton, a few miles northwest of Lewes. 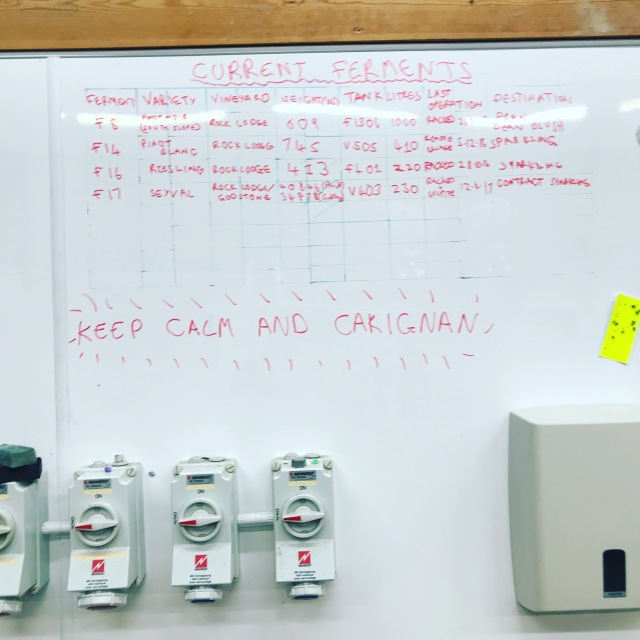 Writing here and elsewhere mainly about the outer reaches of the wine universe and the availability of wonderful, characterful, wines from all over the globe. Very wide interests but a soft spot for Jura, Austria and Champagne, with a general preference for low intervention in vineyard and winery. Other passions include music (equally wide tastes) and travel. Co-organiser of the Oddities wine lunches.
View all posts by dccrossley →
This entry was posted in English Wine, Tasting Wine, Wine, Wine Science and tagged Chris Foss, Plumpton College, Plumpton College Wine Programmes, Professor Barry Smith, Sensory Studies in Wine Tasting, The Dean Blush English Sparkling Wine, Tony Milanowski, Wine Lectures, Wine Tasting, Wine Tasting is Hard. Bookmark the permalink.