I spent a pleasant evening with Brad Hickey last week. Brad is one part of the couple behind Brash Higgins, a McLaren Vale estate which has a good following in the USA, Scandinavia, and some other parts of Europe, but inexplicably has no UK importer. I have a tenuous link with Brad, and as he was over in the UK for a few days he suggested we get together for a beer. Usually, when an Aussie winemaker invites you for a beer you need to line up the medical support, but Brad is actually an American by birth, from the Windy City. Maybe that’s why I got off lightly with a few glasses of wine and the odd beer, and was home by eleven, though I think Brad had more people to drink with after me.

Our little jaunt took in Sager+Wilde Hackney Road, where I lurched for the Milan Nestarec 2014 Klasika Hibernal, from Moravia in the Czech Republic (just 15km from the Austrian border). I tasted the Nestarec range at Raw Wine this year, and was thrilled that he had recently found a UK importer in Newcomer Wines. This is pretty “orange”, though not his most orange wine. It’s full of the flavours of citrus peel and a slight marmalade note, and seemed wonderfully autumnal. Hibernal is the grape variety. I’m definitely grabbing some of Milan’s cuvées when I head up to Newcomer’s new Dalston shop and bar. Brad went for something more trad, a Leroy d’Auvenay Bourgogne Rouge, which the man behind the bar cheekily said was “Domaine Leroy”. Oh the language of wine!

Moving on to Winemakers Club, underneath Holborn Viaduct, we went straight for a Meinklang Urkorn-Bier, made from spelt and other ancient grains. I think you’ve seen enough photos of this to know I drink it whenever I can get hold of some. It’s just not heavy on the stomach, and it really cleanses the palate. We followed it up with a lovely Macle Côtes du Jura 2011. This is a Chardonnay/Savagnin blend (Macle began making a pure Chardonnay version as well in 2011), made sous voile. It’s quite nutty with a slightly saline finish which is very attractive. It accompanied one of Winemakers’ platters of charcuterie and cheese very well indeed. I still have a little 2010 left at home, but there’s no hurry to drink this, it will last at least another five years, getting more complex as we go.

What of Brash Higgins? Brad’s wine background began as a sommelier (and aspiring food writer) in New York. On his wine travels (working the 2007 vintage for Chris Ringland) he met Nicole, and fell in love with the lady and the land. They farm the Omensetter vineyard on the southwestern lip of the McLaren Vale wine region, around seven hectares of red clay over limestone on an east facing slope. The vineyard is currently undergoing organic conversion, certification expected in 2017. Brash Higgins is the nickname Brad was given by the locals, but although I know how the Aussies do like a nickname, and how brash an American might seem in a different cultural context, when you meet Brad you wouldn’t exactly call him brash.

The Brash Higgins label produces a grand selection of different wines, which range from what we might term “normal” to stuff on the outer fringes of experimentation. The reds include Cabernet Sauvignon, Shiraz, Grenache and Mataro (Mourvedre), along with Nero d’Avola. The white grape selection is pretty extensive, with Chardonnay, Riesling, Semillon, a little Viognier, Chenin and Zibibbo in the mix.

The “out of the box” thinking at Brash Higgins is exemplified by the Riesling/Semillon blend (labelled R/SM) which I drank at home this weekend. It’s a field blend, but obviously an unusual one, and the grapes are co-fermented. In some respects it reminded me ever so slightly of Ganevat’s Kopin, which we coincidentally drank last night. Kopin is a blend of Chardonnay (Jura and Macon) with Alsace Riesling, and you can quite clearly identify both grapes in the blend (at least when you have prior knowledge). The Riesling/Semillon is similar. Riesling forms the table top with all the dry character of that grape in Australia, whilst the Semillon sort of provides the legs which support it, a fresh lemony weight, though the wine is not heavy, and at just 12.6% (sic) alcohol, it is well balanced.

At the outer limits of the range sits Brad and Nicole’s most famous wine. Bloom is a sous voile Chardonnay, aged for eight years under a thin veil of flor. Only 35 cases of this saw the light of day so it’s pretty rare, 2008 being the current vintage. Brad also has his “Amphora Project“. He has 24 of these vessels (I think – he told me the story of the worst day of his winemaking life, when he smashed a full one with a forklift truck, eek!). He fell in love with the amphora wines of Northeastern Italy and Sicily during his time as a sommelier, and he uses them for Zibibbo (ZBO), Nero d’Avola (NDV) and Merlot (MRLO). Brad found an Adelaide potter, John Bennett, who constructs and fires the pots, so there’s a whole new source of beeswax-lined vessels available now for the adventurous winemakers of South Australia. The Zibibbo is sourced in the Riverland, normally viewed as an irrigation district producing very cheap fruit for mass market blends. Brad says he’s made a “silk purse out of a sow’s ear”, which is how the wine was described by one of our most esteemed wine writers not that long ago. I’ve not tried this Amphora Zibibbo, nor the Bloom, but I hope to do so very soon. Watch this space.

As I mentioned earlier, Brad doesn’t have a UK importer, although I think there’s some interest, and I know that’s one reason why Brad was over in the UK. Where does the range sit? That’s a difficult one. Many of the wines would fit into the portfolio of any medium sized importer with a good Aussie selection. Yet some of the wines, as described above, are the result of really exciting projects and some radical thinking. As my son said on looking at the label, they look like “hipster” wines (I drink too many so-called hipster wines to know what one looks like), yet they are not biodynamic, nor are they sulphur free, which probably means they won’t be of interest to a certain section of the UK wine trade. But if a man comes to London and visits Sager+Wilde, Winemakers Club and 40 Maltby Street, you can see what’s going on in his head (and he was off to visit Raw in New York next, and hopefully Ten Bells). I have an idea or two where they might fit, but let’s see how things pan out. Brad’s a really nice bloke, and I hope he finds UK success soon. Every time I told a wine friend I was meeting up with him, they certainly knew who he was, and two of them asked whether he had any Bloom on him! So there you go, Brad. 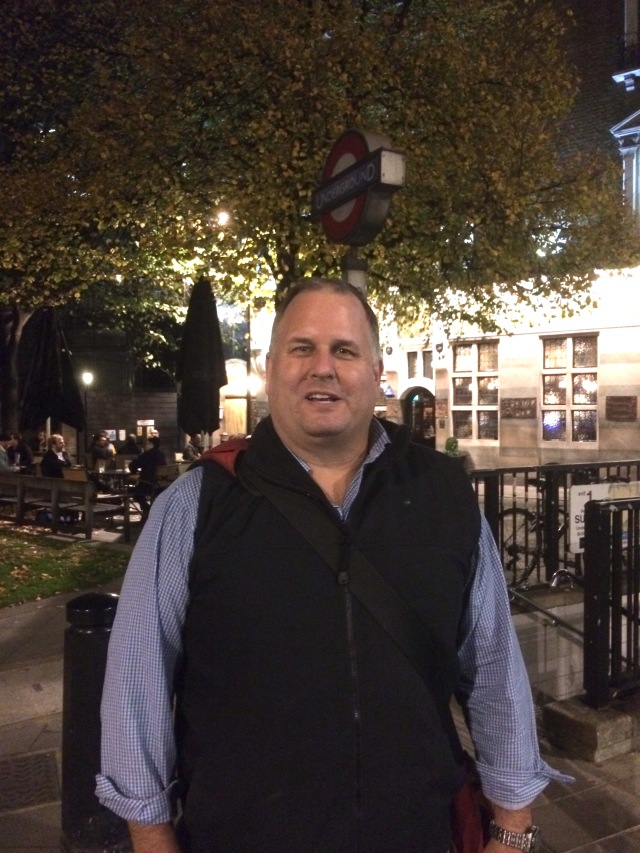 Brad Hickey, a man with a big heart (he needs it, he runs marathons)

Writing here and elsewhere mainly about the outer reaches of the wine universe and the availability of wonderful, characterful, wines from all over the globe. Very wide interests but a soft spot for Jura, Austria and Champagne, with a general preference for low intervention in vineyard and winery. Other passions include music (equally wide tastes) and travel. Co-organiser of the Oddities wine lunches.
View all posts by dccrossley →
This entry was posted in Australian Wine, Jura, Wine and tagged Amphora Zibibbo, Australian Amphora Wine, Australian Flor Wine, Australian Sous Voile Wine, Australian Zibibbo, Brad Hickey, Brash Higgins, Macle Cotes du Jura 2011, McLaren Vale, Omensetter Vineyard, Riesling/Semillon Blend. Bookmark the permalink.