London Cru is London’s first urban winery, importing grapes in refrigerated trucks straight after harvest and turning them into wine in a pretty much state of the art winemaking facility in West London, right underneath the offices of innovative London wine merchant, Roberson.

When you think of a winery you might think of one of those architect designed extravagances in Northern Spain or California, or maybe you might think of a few vats and barrels bubbling or snoozing in a little back street in Vosne or Sancerre. London Cru don’t have anything flashy, or quaint, like that to boast about from the outside. Once you leave the noise and bustle of South Kensington, the closer you get to West Brompton Station, the quieter and less salubrious it gets, and you kind of wonder why houses are so expensive in this part of London SW6, much of which is one big building site anyway. The winery is tucked behind a rather unattractive mid-20th Century building, down an access slope, but once inside, you could be in any modern, well maintained, wine domaine. Stainless steel tanks sit on a scrupulously clean concrete floor, and all the equipment gleams. A separate room contains racks of rather more barrels than I expected, from a nice assortment of famous name coopers. Altogether, impressive, indeed classy. 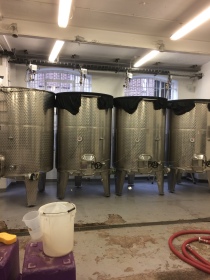 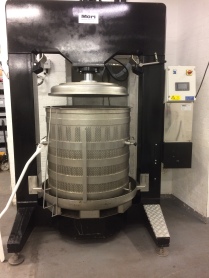 I’ll admit I had left it rather a long time to make a visit to London Cru. It must be a couple of years since I tried the first of their wines to come my way. Spirit of London was a blend winemaker Gavin Monery and the in-house team put together for UK supermarket Marks & Spencer. It was the 2013 vintage, a blend, if I remember correctly, of two thirds Cabernet Sauvignon from the Languedoc and one third Piemontese Barbera. Not as fine as the wines I was to taste yesterday, but it was good, and it was adventurous of Marks & Spencer to create the label. It was thanks to Roberson’s Paul Williamson, a frequent attendee at the Oddities Lunches, that I finally got to visit London Cru. Thanks Paul, and thanks Gavin for spending a good part of your afternoon with me.

The first part of the visit gave me a short opportunity to nose around the vats, and to get an explanation of how the winery gets its fruit. They work with people either known to Roberson, or recommended by their growers. In the past they have worked with people like star Languedoc producer Jeff Coutelou. For the 2016 harvest they used sources as diverse as Syrah from Calatayud in Spain, to Bacchus harvested in Essex and Kent. The fruit is picked into the grey plastic containers you can see winemaker Gavin Monery demonstrating in the photo below. Half to two thirds full, the grapes are not crushed at all. They travel as swiftly as possible to SW6 at a temperature of around five degrees celsius, and when they arrive they are dry, with no broken berries. This enables whole bunch fermentations when preferred, and there’s a modern basket press to press the grapes when required as well.

If you think it’s a long way to truck in grapes from Spain or Italy, you have to remember that it is pretty normal to truck grapes across Australia, and that producers are letting grapes rest in a protective environment, or giving them a cold soak before fermentation and pressing more and more often. Of course, being made in London, the wines don’t have a designated region of origin in their own country. They are Wines of the European Union, but the main thing is their quality, so what are they like?

I got to taste three wines from bottle yesterday afternoon, and all were actually more impressive than I expected. I was expecting them to be good, but was perhaps surprised by how good. That’s down to two things. First, getting good grapes. They are not just grabbing anyone’s leftovers. For example, Luca Roagna recommended the grower and vineyard for the Barbera (and even helped pick it). Secondly, Gavin knows what he’s doing. His winemaking CV includes supervisory roles at Cullen and Moss Wood in his native Western Australia, and he’s done European harvests with several well known producers in Burgundy, and with Jean-Louis Chave in the Northern Rhone.

Charlotte Street 2015 is a Limoux Chardonnay of perfect freshness. It was barrel fermented (old oak) after cold whole bunch pressing, using 20% ambient yeasts and 80% Burgundian strains. It then had eight months resting on its gross lees for a touch of richness, enhancing flavour, before undergoing just a partial malolactic. You get creaminess, stone fruit like white peach, and a touch of citrus, but there’s great focus and clarity. At just 12% alcohol you really want to keep drinking it. Very successful. Apparently Richard Hemming MW reviewed this wine favourably in comparison to “most Chardonnay made in Burgundy”, if that isn’t a challenge to seek some out. I remember the excitement when I first tasted Limoux Chardonnay in the early 1990s, but I really think this is at another level. 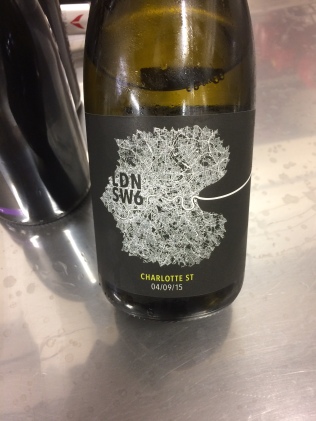 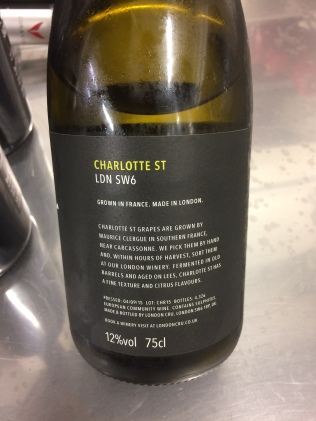 Barbera 2014 was sourced from Giovanni Cordero, near the village of Priocca, in Cuneo Province (just west of the A33 Autostrada, between Alba and Asti). It is given a 3-4 day cold soak and a warm ferment at around 30 degrees. About 70-80% goes into old oak, and 20-30% into stainless steel (which helps give an aromatic lift to the final bottling). Indeed, the acidity and freshness balances the lush fruit rather well, and the tannins are particularly well managed. Brambly, but none of the weedy, stalky, bitterness you can get with some cooperative Barberas. It has the amplitude and drinkability of, say, a good juicy Gamay along with the grip and structure for ageing. 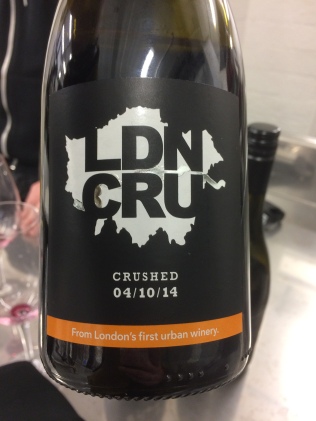 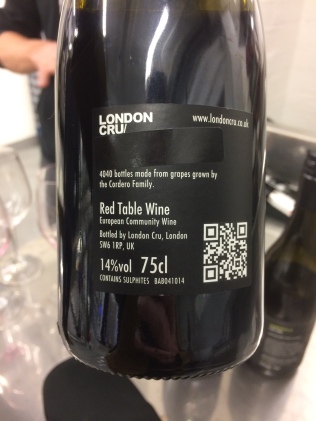 Syrah 2014 was sourced with the help of Norrel Robertson MW from Manuel Lashera’s vineyards in Calatayud, Spain. These vines are at 900 metres altitude, on thermally efficient decomposed granite, and the freshness that Gavin seems to look for in his wines is clearly the product of cool nights, and slightly early picking. Low rainfall is also key. The grapes are harvested with a PH of around 3.4, but they are not short of acidity. The fruit here is plummy, but it is overlaid with notes of coffee, chocolate and a little spice. The wine is attractive now, but give it five, even ten, years and it will definitely improve further. It clearly has that kind of potential. 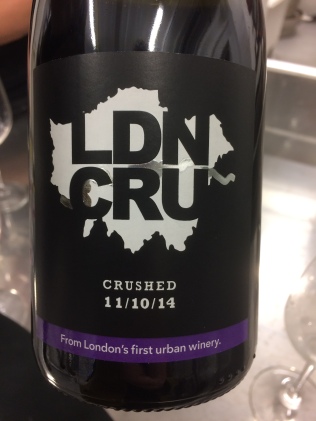 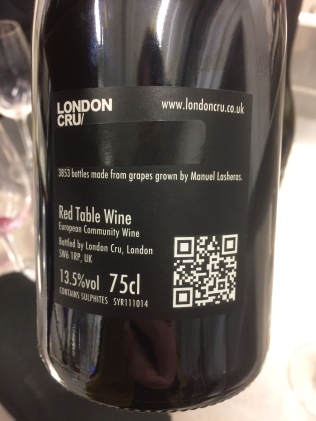 I’m amazed at just how good the reviews of these wines have been from wine professionals, and I’m really looking forward to seeing how the range develops. I tried the 2016 Bacchus from tank. It has almost finished its fermentation, with just about 10g/l of sugar remaining. The juice was quite exotic, one of those musts you have no difficulty quenching your thirst on without spitting. This year the grapes were sourced from Essex as well as Kent. Gavin wants to preserve the nose, which has really lovely elderflower, and a little Sauvignonesque cut grass. He half joked that he’d love to try making a pét-nat from it. I really think that would work, and he should set aside a little to experiment. Bacchus can be dull and all about the acids, but if the bouquet is preserved as intended, this will be something altogether more exciting…didn’t think I’d ever say that about Bacchus, with profound apologies (yet again) to certain English vineyard consultants.

Then we repaired to the barrel room for a drop of Pinot Noir. This comes from Limoux, like the Chardonnay. It’s quite dark in colour right now, and it’s awaiting its malo (Gavin says it will get paler after the malolactic) as it rests in wood on its lees. It has that nice fruit of gently basket-pressed grapes, with a little tannin to give structure. I’m putting this, stylistically, somewhere between good Bourgogne Rouge and somewhere New World, maybe Mornington? I’m not feeling that we’ll be getting masses of complexity, but there will be juicy fruit in abundance with a bit of the grip demanded by food when it is finally bottled. But who am I to judge these things?

Pinot Noir from the barrel

London Cru’s expanding range demands attention. These are remarkably good wines, though voices far more experienced, and far more high profile, have said this long before I have. The full current range will be launched to press and consumers over the next month, and in fact I’m gutted to be over in Paris on the day of the November Press Launch (well, a little bit gutted). If you seek them out I promise, on the basis of what I tasted yesterday, that you will be very pleasantly surprised. Do look out for the 2015 Albermarle Street, a Rias Baixas Albarino from near Pontevedra, which has also had astonishingly good reviews, though it was not available to taste.

London Cru has a pretty decent web site – check it out here.

Writing here and elsewhere mainly about the outer reaches of the wine universe and the availability of wonderful, characterful, wines from all over the globe. Very wide interests but a soft spot for Jura, Austria and Champagne, with a general preference for low intervention in vineyard and winery. Other passions include music (equally wide tastes) and travel. Co-organiser of the Oddities wine lunches.
View all posts by dccrossley →
This entry was posted in Wine and tagged Charlotte Street Chardonnay, Gavin Monery, London Cru, London Urban Winery, Roberson Wine, Spirit of London Wine, Urban Winery. Bookmark the permalink.