I remember a very long time ago playing a game when travelling around France. It involved trying wines which back then had almost never made their way over to the UK. Entraygues-et-du-Fel, Crépy, Irouléguy, Ripaille, Saint-Pourçain or Aprémont, for example. The keen-eyed among you will notice that three of those are Savoie wines. I’ve said many times that Savoie is set to follow Jura, into fashionability, it’s just a matter of time. But now it seems that Savoie’s younger sibling is not too far behind, albeit on a massively smaller scale.

The dispersed region of Bugey lies in France’s “first” département, Ain (the one without the “s” and the “e”), roughly between Bourg-en-Bresse in the west and Chambéry in the east, with the long Lac du Bourget and the town of Seyssel (well known for its AOC sparkling wines) forming a firm eastern boundary. It’s a land of traditional polyculture, more dairy than vines. In fact, the viticultural area numbers only around 500ha of vines, most on glacial deposits on the slopes of narrow valleys, in what we might call the pré-Alps. Vines have been planted here supposedly since Roman times, but the region became VDQS in 1957, and AOC only as recently as 2009.

Traditionally, Bugey was made up of eleven individual Crus, but today you are only likely to find three of note. That said, Montagnieu (which you may find with an “x” appended in older writings), Cerdon and (to a lesser extent) Manicle are all making waves in ways which you would not expect from what many still see as something of a rural backwater, and everything is being done by a little more than a dozen serious producers.

The Cerdon Cru, lies in the north of the region, west of Bellegarde (the last Autoroute exit before you hit Geneva, providing access to the south-eastern side of the Jura chain). The most interesting production comes from a regional speciality, the gently sparkling wines made by the Méthode Ancestrale.

A little way to the south of Cerdon lies Montagnieu. This is perhaps the best known of the Crus, making the greatest variety of wines. It is also home to the producer making the biggest splash in export markets, Franck Peillot (the link is to a piece on the wineterroirs blog from 2010), whose 6ha domaine is just outside the village of Montagnieu itself. Here, in this Cru, you will find the whole range of Bugey wines – sparklers made by the Méthode Traditionelle, an array of whites from Chardonnay to Altesse, and several reds made from Gamay, Pinot Noir, and the very interesting Mondeuse, a speciality of nearby Savoie.

Manicle tends, from the little I have seen, to be primarily focussed on white wines.

The future for Bugey may lie in two directions. The first is with the Reds from Mondeuse. Although there are some good reds from Gamay, and the beginnings of some remarkably fine Pinot Noir, it is this characterful Savoie grape which the region will hopefully make its own. The best Mondeuse I’ve tasted is from Franck Peillot, the bottle I drank last night being the catalyst for this article. Peillot also makes exceptional Altesse (the true Roussette), along with Pinot Noir and Chardonnay. Although the region is not as similar to the various Savoie Crus as you might imagine (in terms of micro-climates, geology and altitude), Peillot clearly has an affinity for the Savoie varieties, and it would be fair to say that proud as Franck is with his Pinot, most critics rate his Mondeuse as the top wine (and they rate it highly). The Altesse doesn’t come far behind. 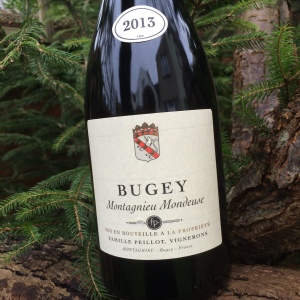 The other direction is a little more obscure, yet from a wine much abused in the past, it has become almost a cause célèbre of Bugey. It is made by the Méthode Ancestrale, a form of bottle fermentation without disgorgement. Sounds familiar? It is the method made popular by dozens of tasty pét-nats from Touraine to Jura. Much Bugey-Cerdon is Demi-Sec and more pétillant than fully sparkling. Made with either Gamay or Poulsard, or a blend of both, it’s a light and refreshing wine which, for comparison, brings to mind Italian Brachetto from Acqui.

So who are the names to look for? Certainly Franck Peillot for Montagnieu wines, and these have been available in the UK at forward thinking merchants like Winemakers Club. For Bugey-Cerdon, the best I’ve tried was from Cécile and Vincent Balivet who farm at Mérignat (just south of Cerdon itself), though the wine in the photo below was purchased in France. 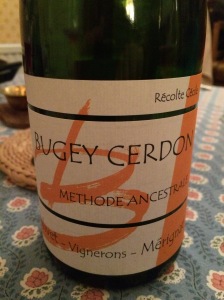 Patrick Charlin is another Montagnieu producer whose name gets mentioned, especially for very high quality Pinot Noir, as well as sparkling Montagnieu Brut, which is also a speciality of Yves Duport (one of the region’s several biodynamic domaines – something which seems to be a characteristic of the most quality conscious and successful producers). For more Cerdon wines made by the ancestral method, also look for Patrick Bottex, Raphaël Bartucci and Domaine Guinet-Rondeau. Jean-Christophe Pellerin’s name has come up a few times, but I can’t claim to have caught sight of his wines yet.

There are also some larger producers. One, Maison Angelot, now run by Eric and Philippe Angelot, was the source of the first ever Bugey wines I purchased in an autoroute service station near Bresse. Their black labelled Mondeuse is a wine which seems to turn up at a lot of restaurants in the wider region, and we always order it when dining in the village where Geneva friends have a weekend/summer place. It may not match Peillot’s Mondeuse, but it’s a serviceable (like the restaurant Bois Joli itself) intro to the region’s reds. 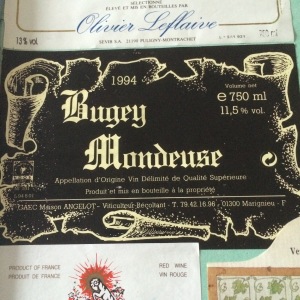 You might also come across Domaine Monin, who became known for something which was once one of Bugey’s big sellers, Roussette de Bugey. There isn’t actually much of the white grape, Roussette, left in Bugey now, and the name came over time to describe a wine style, not the grape variety. In fact, Chardonnay became its common base. I’m not sure where this stands now, in the post-AOC regime? **[edit: Wink Lorch has kindly added clarification to this question, see in particular her comments of 04/08/2017]. It sounds a bit to me like Australian White Burgundy, Californian Chablis, or (if you are ancient enough to remember it), Spanish Sauternes. I’m pretty sure that any Roussette de Bugey you see today will be made from that grape variety, aka Altesse. Monin now major on Chardonnay, Gamay and Pinot Noir. The region also boasts a number of small co-operatives. 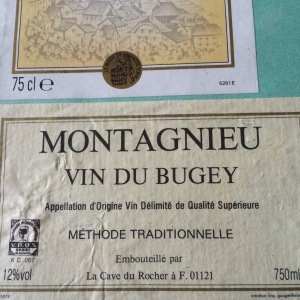 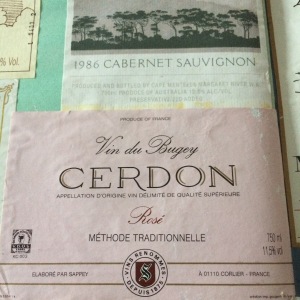 Finally, there is another anomaly, the fate of which I have not been able to ascertain – Pellin Rosé. Made by another well known regional producer, Varichon & Clerc (who own, or owned, the well known Royal Seyssel sparkling wine brand found in many a French hypermarket in my youth), Pellin proclaims it’s origins in the Méthode Ancestrale. But according to Wink Lorch’s chapter in Wine Report 2007, it is (or was) made from Gamay grapes bought in, and presumably not necessarily from the region. Again, there was nothing wrong with the wine itself when I tried it many years ago, but I can’t see that it would fit in with the AOC regime without locally sourced fruit. 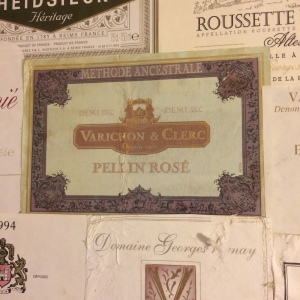 It took a long time for Bugey to achieve AOC status for its wines, and there were a few hiccups along the way. There is no doubt that achieving the AOC has been a positive influence, enabling the best producers to be taken more seriously in France just at the time when a raft of never before heard of wines were starting to establish themselves. The Bugey wines were an ideal fit in the new wine bars of Paris, and in some commentators’ opinions it pretty much saved the region, surely one of France’s most obscure.

Cerdon, especially, is precious to those who make a fine version (fine in the quality and typicity sense, because there is no attempt here to make fane wane). A lot of so-called Cerdon was, according to several writers, made by the infamous “bicycle pump” method, whereby cheap still wine is made fizzy by the introduction of carbon dioxide, rarely leading to fine bubbles, nor fine quality. As we begin to see more Bugey-Cerdon on export markets, protected by its AOC status, I hope that this lovely, if pleasantly frivolous, wine will gain more friends.

So, as they say here in corny-ville, let’s Bugey!

Writing here and elsewhere mainly about the outer reaches of the wine universe and the availability of wonderful, characterful, wines from all over the globe. Very wide interests but a soft spot for Jura, Austria and Champagne, with a general preference for low intervention in vineyard and winery. Other passions include music (equally wide tastes) and travel. Co-organiser of the Oddities wine lunches.
View all posts by dccrossley →
This entry was posted in Sparkling Wine, Wine and tagged Altesse, Bugey, Bugey-Cerdon, Cécile Balivet, Franck Peillot, Maison Angelot, Méthode Ancestrale, Mondeuse, Montagnieu, Vincent Balivet. Bookmark the permalink.