Back when I began enjoying wine, pre-Parkerisation, there were lots of red wines which, when served cool, or at “cellar temperature”, used to quench a thirst on a warm day. Back in the late 1970s it wasn’t uncommon to find Bordeaux Classed Growths coming in at under 12% alcohol. Without discussing the merits, or not, of such wines, you could share a bottle over lunch and stay awake at your desk beyond 3pm on returning to work.

I’m not really one for segregating the wine year by season, although it’s hard not to do so just a little bit. Thoughts turn to Nebbiolo as the leaves turn in colour, or to Beaujolais when the first glow of Springtime warms my face. There have been some warm days in Southeast England amid all the thunder storms, not to mention the other storms we are facing (out of Europe twice in one week is hard to handle). A bit of true liquid refreshment has been called for, and as all these wines, drunk over the past two weeks, fit that bill, both red, white and orange – they’re worth sharing. 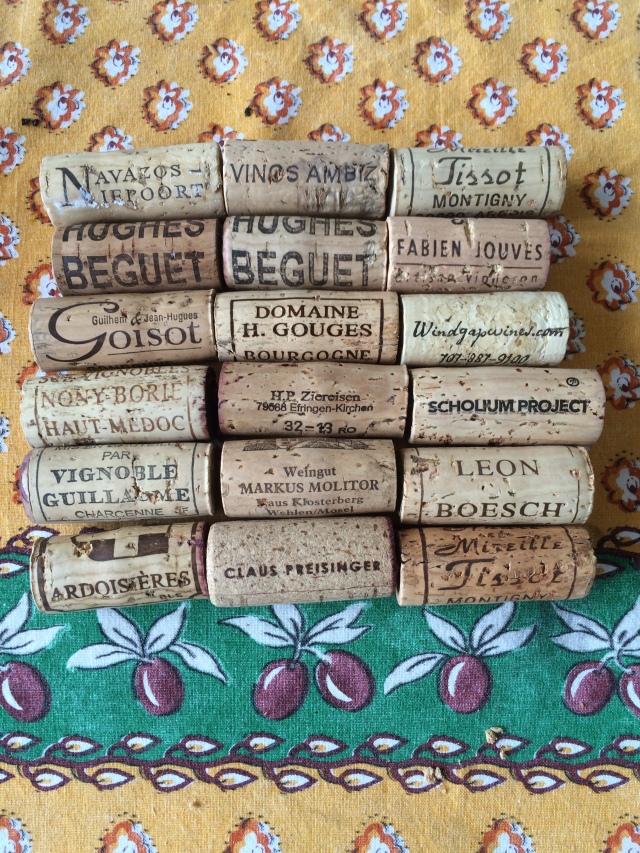 Burgenlandrot 2014, Meinklang – The Klang make plenty of more expensive wines, but as I’ve said before, a true test of a winemaker is their entry point. Burgenlandrot is their simply named, does what it says on the label, wine that ticks all the boxes. A vibrant, dark red with a nose of peppery cherry. The blend is Zweigelt, Gamay and St Laurent. Its fruit is quite intense, partly because it’s lifted by refreshing acidity. I’m guessing Winemakers Club are taking (of necessity) their “Central London Location” cut, but at £16 it still represents excellent value…if they have any left, of course. It’s a lot cheaper in Austria, about €10 with taxes, but after the petrol…I’m not complaining. Alcohol – 12.5%. 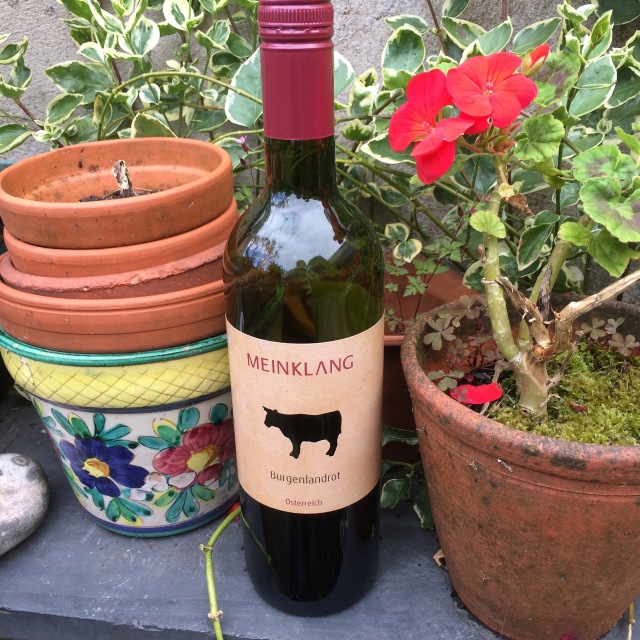 Arbois “Champ Fort” 2009, Patrice & Caroline Hughes Beguet – This is Poulsard, or I should say “Ploussard” (Patrice has another cuvée complementing this one from the Côte de Feule in the “World Capital of Ploussard”, Pupillin). Champ Fort is from a north facing site of grey marl in the family’s home village of Mesnay, just a minute or two out of Arbois. This aged example, which I bought from Patrice in 2014, has fruit, structure and maturity. It feels à point. Although Wink Lorch describes the Côte de Feule as the top wine in the range (in Jura Wine, 2014), this particular Champ Fort is, on reflection, probably the best of Patrice’s wines I’ve tried to date. Alcohol – 12.5%.

Fleurie 2010, Jean Foillard – This is one of the wines we drank at our son’s recent wedding. Everyone rightly raves about the Morgons from Foillard, but his Fleurie is a dark horse and is sometimes my favourite. This 2010 is drinking superbly now, a majestic wine, smooth, fruity but not lacking grip. Earlier this year I was talking to a member of the Foillard team, who told me that this wine was what they’ve been drinking at the domaine this year. ‘Nuff said. Alcohol – 13%.

Brauneberger Juffer Riesling Kabinett 2010, Schloss Lieser – The other wedding wine. Thomas Haag is one of my favourite Mosel producers, even though his castle, a little downstream from Bernkastel on the opposite bank, is a little forbidding. When you want something light to go with the fizz, beer, gin, B52s and rum, this is just the thing. But it’s the ability of wines even at this level to age well which makes them quite remarkable. Alcohol – 8%.

Prosecco Colfondo NV, Casa Belfi – My son’s elder sibling had a birthday a few days after the wedding and we were pleased to be able to celebrate it with her. This and the following wine engendered a deep discussion on natural wines with two of her friends deeply into sustainability and permaculture. Colfondo Proseccos are cloudy, bottle fermented without disgorgement. There’s a yeasty softness. The cloudiness often makes people wary, but there’s something elemental, by which I suppose I mean primitive, but in a positive way. A wine full of contradictions, yet emerging at the end in simple form with all its flavours on its sleeve. Not the most profound of wines, indeed not the most profound of Proseccos (Casa Coste Piane anyone?), but bursting with simple pleasure.

Albillo 2014, Vinos Ambiz – This is the third time I’ve drunk this in the past couple of months, the first being at the Raw Popup at the London Edition Hotel in early May. An orange, skin contact, wine from the Sierra de Gredos, made by Fabio Bartolomei, although “made” is hardly fair. Winemakers often say that a wine makes itself, but other than some organic sheep and goat manure every two years, plus a tiny bit of sulphur in some of the wines when required, that’s all Fabio does. This wine is slightly cloudy with peach, apricot and mandarin flavours balanced by a savoury note. You don’t notice the alcohol at all, remarkable! One of the most challenging wines you’ll taste all year, but assuming you like a challenge, this is fantastic. But be warned. Others may run at the first mouthful. Alcohol – 15%.

One of the guests was the guy with whom we made some wine from a Seyval Blanc plot last year. I have to say that the bottles of white had improved a lot with a few months rest post-bottling. They still weren’t good, but they were drinkable if very tart. But a step up was a batch given extended skin contact. It only managed 5.4%, so not really a wine. But it tasted quite nice. I was surprised. This year the task is to thin the bunches more rigorously so that the remainder ripen better. But it’s not looking all that good on the weather front and even my home vines need pruning back every few days with all this rain.

Zweigelt Kieselstein, Burgenland 2014, Claus Preisinger – I won’t say much about this as I drink it, and write about it, with some regularity. This is a light and fruity red with a little bite/crunch. This time we served it pretty cool and that worked well. It’s probably top of my list of great value Austrian wines. Again, like the Meinklang, this is at the cheaper end of Claus’s range, but none the worse for that. Alcohol – 12.5%. 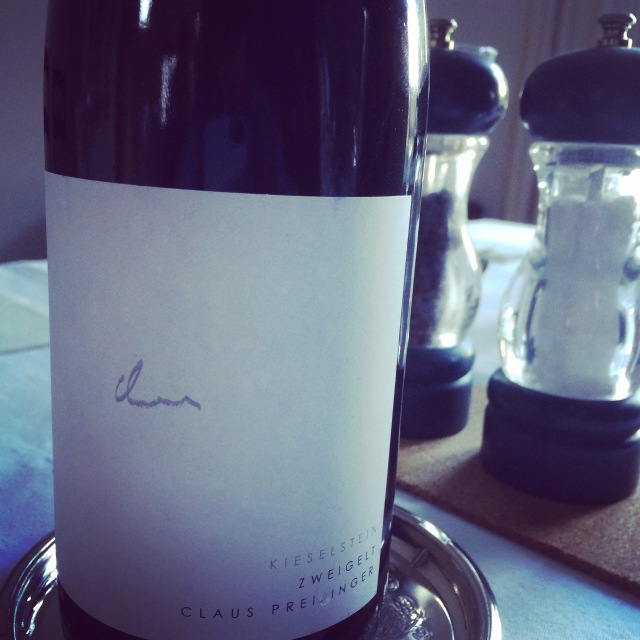 L’Uva Arbosiana, Arbois 2014, Domaine de la Tournelle – Pascal and Evelyne Clairet are among a select group of Arbois producers who owe some of their inspiration, and skills perhaps, to Stéphane Tissot, but who have since gone on to form their own domaines, creating exciting wines of their own. The whole range from Domaine de la Tournelle is exciting, right up to their Vin Jaune. Yet not one of them is more thrilling than this lovely  carbonic maceration Ploussard. Is it a red, is it a pink? Who cares, it’s a totally delicious natural wine. It’s actually the first wine I ever tried from the domaine, which I purchased from Antidote, the restaurant near London’s Carnaby Street where some of you may recall we had one of our three New Beaujolais events last year. This bottle came from Dynamic Vines. I have a massive soft spot for this. Splosh it into a carafe, give it a shake, and enjoy. Jura wine at its most fun. Alcohol – 10.5%.

To finish, here are some Norwegian beers (mustn’t forget these, very nice, they arrived from Norway in a suitcase but I’m reliably informed that M&S have the prescience to stock the one on the right), and a sneaky peek at what we shall be drinking tonight – Domaine L’Octavin’s Cul Rond à la Cuisse Rose (pardon my French). White Ploussard, no less. 10.7% alcohol, FYI.