Spice Up Your Life

That seems so long ago, doesn’t it! My life needed spicing up yesterday, one of those mornings, thankfully not coming along too often, when Friday 13th seemed to have arrived a week early. It was our last “curry” lunch before Christmas. Officially it is known as “Spice Oddities”, the brainchild of Wine for Spice founder Warren Edwardes, who is a regular attendee at our Rochelle Canteen Oddities lunches. But I’m usually hopeless at matching wine to hot or spicy food, and although we cook a lot of pseudo-Indian meals at home, we either drink beer or don’t think too hard about which wines we drink, often choosing a cold and fairly neutral white of no great complexity.

The India Club, on the Strand by Waterloo Bridge, is our usual venue. The food is extremely good value with the premium set lunch costing £20 including a reasonably generous tip. I always enjoy it, though whether it was my mood or not, I was not quite so enthusiastic yesterday for some reason. Nothing wrong with the food, but the flavours seemed a touch muted. 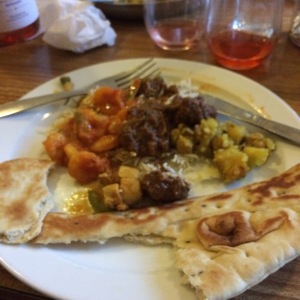 We began with two whites (all wines served blind). The first was correctly identified as a Southern French dry white. We also got that it was a single variety – linear with mineral freshness and a real purity of line, very dry. It turned out to be Clairette – Clos Mathelisse Clairette 2014 Vin de France, David Caer. It’s a wine in the Natural Wine mould, though in no way cidery. Delicious, in fact, though not complex. A good 13% alcohol. 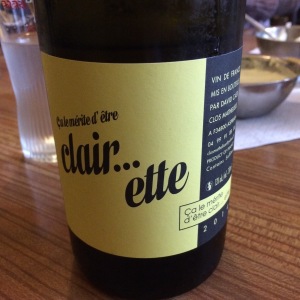 The second white was not difficult to guess as to grape variety, but we were wholly out with origins. Some said New World/Australia, I said Alsace. It was a lovely off-dry wine, petrol on nose, some lime and citrus on palate. It was in fact Erdener Treppchen Spätlese 1986, Schwaab-Riebel, a producer (from Urzig) I’d never heard of. Actually a delicious wine, and only recently purchased from Berry Bros, although I’m told it’s sadly all gone. 7% alcohol, balanced, aged beautifully (I thought it was maybe 1998/99).

Next were two wines brought by Warren, both fitting into his view of what enhances Indian food, though one being a bit unusual. This generally means an off-dry frizzante style. In other words, not fine wines, but wines which, like beer, with a touch of fizz and sugar, soothe the warmth and spice of the food.

Velada Moscato Rosado NV, Valencia DO from Spain was simple, pink, frothy, just 5% alcohol. Perfectly fresh, yet simple. I thought it a Brachetto. It appears that the grapes may not be your vrais Moscato Rosa, but perhaps white Muscat with a touch of red wine added. Its strawberry/raspberry fruit was quite nice and only a touch confected.

The second spritzy offering I’d had before. With it’s “Lucozade” orange colour and its “Aperol-like” herby nose and bitter orange palate this had to be one of Warren’s famous Lidl specials, Grazzano Sprizz. It’s described as an “aromatized wine-product cocktail with notes of bitter orange” (6.8% alcohol). It’s pretty much the same as Aperol diluted with sparkling water, though again here there’s a touch of the confectionary in the orange. I have a rather unhealthy, if mild, appreciation of this, and having had it several times before it was not too difficult to guess.

Both of these went well with the food, and as beverages were both pleasant and refreshing. They are not wines to over excite the wine obsessive, but that’s not the point.

Moving onto the reds, this is often the type of wine we find hardest to match. First we had a dark, plummy red with a good heft of alcohol and a bit of acidity. The plummy business, along with a tiny touch of mint, should have helped us guess Australian Merlot, but I think as everyone had guessed New World, the acidity then threw us as to grape variety (did the majority think Shiraz?). It turned out, however, to be Wild Duck Creek Estate Reserve Merlot 2001, Heathcote. This region, in the North of Victoria, produces, for those who allow themselves to use the term, highly mineral wines with a pronounced freshness. Obvious when you see the bottle. 15% alcohol, though it didn’t taste like it. It was refreshing and very enjoyable, and not a wine we are used to having with a good bit of bottle age. 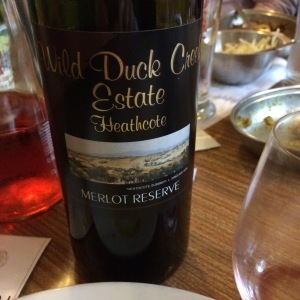 My bottle next, which Warren guessed pretty quickly, or near enough. He said Barolo Chinato. It was, in fact, the same idea but from within the Barbaresco zone – Monsú, Giuseppe Negra. This is pretty much what you get if you take a Nebbiolo, fortify it to 16.5% and age with herbs like gentiane and spices like coriander. The spices are quite prominent on the nose, but the palate is richly sweet and smooth. Ironically, I think this very left field choice might be the best food match I’ve made at one of these lunches.

We were left to finish with a treat, a favourite producer and a lovely wine – Gewurztraminer SGN “Fronholz” 2007, André Ostertag. Half bottle, 8.5% alcohol, concentrated, balanced sweetness with lychees. A lovely wine. Not really an ideal food match here, but then we’d finished the meal and it was a great way to end it.

So, yet again, we proved how difficult it is to match the product of the fermented grape to Indian cuisine, but at the same time, how easy it is to eat well (in both respects) on The Strand, and equally to get through a few nice bottles on a Friday lunch time.

Writing here and elsewhere mainly about the outer reaches of the wine universe and the availability of wonderful, characterful, wines from all over the globe. Very wide interests but a soft spot for Jura, Austria and Champagne, with a general preference for low intervention in vineyard and winery. Other passions include music (equally wide tastes) and travel. Co-organiser of the Oddities wine lunches.
View all posts by dccrossley →
This entry was posted in Wine, Wine and Food, Wine with Curry and tagged India Club, Wine For Spice. Bookmark the permalink.

3 Responses to Spice Up Your Life