I enjoyed a tasting event at Elderflower Restaurant a few weekends ago (see here), but until Saturday night I hadn’t dined there. That was soon put right, four of us enjoying a meal of a standard high enough that I can recommend a detour to Lymington without any hesitation.

Lymington is a sleepy Georgian town on the south coast, reached by a drive through the beautiful New Forest, beyond Lyndhurst and Brockenhurst. My connection is that my wife grew up near here, and my mother-in-law lives there. When she was younger, my wife couldn’t really wait to escape what seemed like a town full of retirees, but nowadays it at least has a good sprinkling of weekend residents from London who come not just for the yachting, but for a very good Saturday market and an increasingly worthwhile restaurant scene (I reviewed the fish and seafood restaurant, Verveine, in nearby Milford-on-Sea last year). Don’t forget Solent Cellar just up the High Street from St Thomas’s Church either, one of the South’s very best wine shops. A browse in here is pretty essential for any serious wine lover (some very good Champagnes in the glass cabinet, a surprising number of wines in magnum, and a host of gems for the very adventurous, a range many London shops would be proud of, and half these wines don’t sell out quite so swiftly).

The restaurant sits half way down the old cobbles towards Lymington Quay. It’s an old building with low ceilings and beams, relatively small and only a little less unprepossessing from the outside than the tea room which previously occupied the site before Elderflower opened its doors in early 2014. Owner and Head Chef at Elderflower is Andrew Du Bourg. He started his career during college at The Goring in London and, after stints at places like The Square with Phil Howard, he made Head Chef at Club Gascon, before moving to the same role at the famous country house hotel along the coast, Chewton Glen. Front of House is run with warmth and professionalism in equal measure by Andrew’s wife (and co-owner), Marjolaine, and fellow French compatriot Julien Bailly.

Fresh ingredients, well executed dishes, a degree of innovation in both construction and presentation are all evident. Highlights would include very fresh local crab if they have it, excellent turbot, and the smoked cigar dessert (this comes with a layered mousse in a glass coffee cup and a smoked chocolate cigar in an ash tray beside it). Andrew also accommodated my vegan wife with an inventive menu which probably tops anything put together for her before – and willingly so, no grudging response to her dietary requirements. 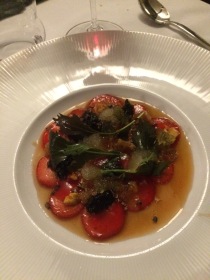 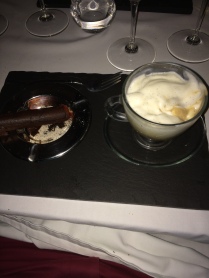 The wine list at Elderflower is perhaps a work in progress. It’s the only thing one might quibble with (the younger waitresses don’t have the confidence of their counterparts in those places Andrew has worked in before, but I couldn’t fault the service). That’s not to say the list is devoid of plenty of good wine by any means. Indeed, if you want Mouton 2005 you can have it. It’s just that the list could do with a few more of the type of wines that will excite the wine enthusiast. But this is a very minor quibble. The 2014 Foillard Cote du Py we took from the list was magnificent. The rest of the wines were either consumed before we went (the first two wines below), or taken on special dispensation (the Loire and Alsace bottles). I don’t think corkage is generally encouraged.

We began the evening with a wine of both linear freshness and a good undercurrent of richness, but never losing a certain finesse which gives it great versatility. It will match so many dishes, despite our selection of it as an aperitif. It has been a long time since I drank André Clouet Cuvée 1911 but it’s wonderful, and at £70 is pretty good value for a multi-vintage prestige cuvée in my opinion. It’s 100% Pinot Noir from the best of Clouet’s Bouzy holdings on the Montagne. Only 1,911 bottles are produced, of course, so you won’t find it in Waitrose. 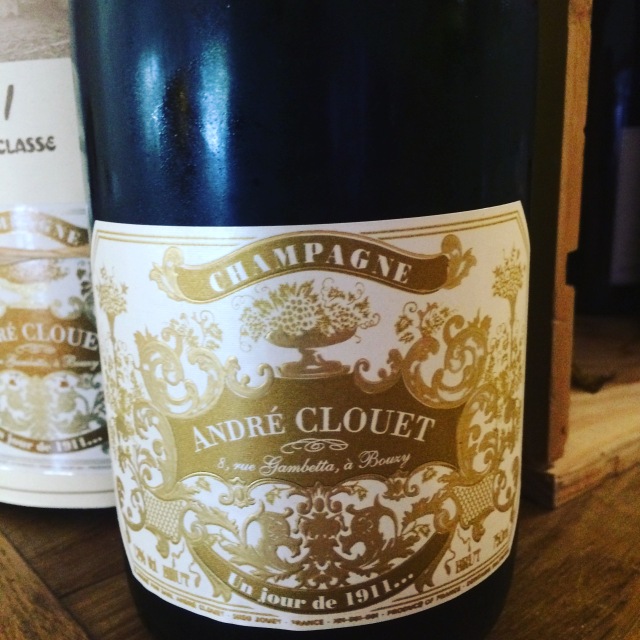 One of our foursome had planned to take a Coche-Dury Bourgogne Chardonnay 2007 to the restaurant, but on opening this had a few problems. One person thought it was corked. It certainly had a mustiness to it, but it did blow off a little. It was also very acidic indeed and, judging by a profound note on the 2002 I read today on the Winepages Forum, I am sure this bottle was way too young, corked or not.

I was also slightly worried about the Trimbach Cuvée Frédéric Emile 2001. It’s a wonderful wine from a wonderful vintage, but older CFE has been hit and miss over a few bottles I’ve had in recent years, in terms of oxidation. This was dark in colour, but a wonderful, evolved Riesling, and so long as well. On top form. I was very pleased with this bottle. 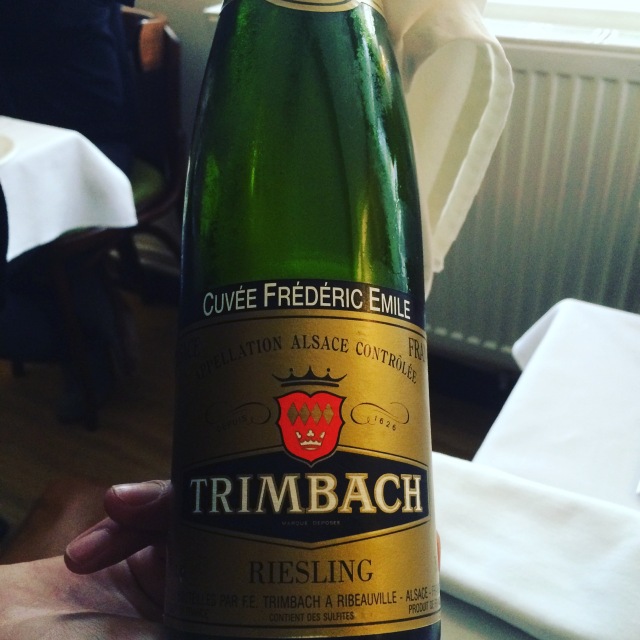 The counterpoint to the Alsace was a Loire wine of some rarity, I think (at least, I don’t see it often despite the ubiquity of the red these days). Clos Rougeard Saumur Blanc “Brézé” 2008 was even darker than the Trimbach, much more evolved in colour than I imagined it would be. But it was fascinating on the palate, a kind of dry tarte-tatin one moment, hoisin the next. The acidity was still fresh and it tasted young…and delicious. The pendulum has well and truly swung for the Foucault family’s wines, but in the rush to Instagram the red, don’t neglect the white. 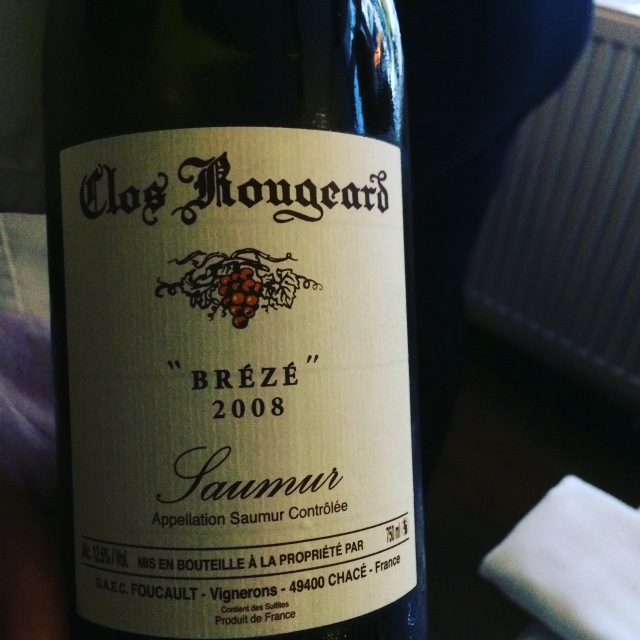 Then finally the Foillard  Morgon Cote du Py 2014. For me, the 2014 vintage in Beaujolais seems to be drinking very well at most levels. This was fresh and juicy. Although at least one diner said they felt it had much more to give, I like a bit of grip with my Gamay sometimes, and I’d not be afraid of popping one open if you have some. The bottle was bought at more or less the insistence of the man who’d ordered steak. I don’t think anyone would argue with that match, but as someone who enjoys reds with turbot, I was happy to go with the flow as well.

A brilliant evening in a restaurant turning out dishes beyond what I’d have dreamed Lymington was capable of a few years ago. Will our disengagement with Europe have a negative effect on gastronomy, or will the British food revolution continue apace? We shall have to see, but I can thoroughly recommend Elderflower, whether you are a merchant banker with a weekend retreat opposite the island, or whether you are camping in a tent in the forest. They even have three rooms over the shop, for those with nowhere to stay, although the town does now boast a few airbnb apartments too.

Booking at Elderflower is via their web site here. A three course dinner costs around £40, or a little more, depending on what you go for. The Foillard was around £60 off the list, but there is plenty to choose from above and below that.

Writing here and elsewhere mainly about the outer reaches of the wine universe and the availability of wonderful, characterful, wines from all over the globe. Very wide interests but a soft spot for Jura, Austria and Champagne, with a general preference for low intervention in vineyard and winery. Other passions include music (equally wide tastes) and travel. Co-organiser of the Oddities wine lunches.
View all posts by dccrossley →
This entry was posted in Dining, Wine and Food and tagged Andrew Du Bourg, Clos Rougeard Brézé, Clouet 1911, Coche-Dury Bourgogne Blanc, Elderflower Lymington, Foillard Morgon Cote du Py, Lymington, Solent Cellar, Trimbach Frederic Emile. Bookmark the permalink.

1 Response to More Than Just Cordial