Sometimes a visit to a producer can be quite a revelation, and this usually happens when you don’t know their wines all that well. Of course, like many of my readers, I’ve drunk a few of Jean-Pierre Rietsch‘s gems, but this was my first visit, and first chance to taste through some of the range.

I won’t pretend it was an easy tasting (on my part) at times. With most producers and growers my French is adequate to communicate, conversational French paired with much of the technical language required for the subject. Yet with Jean-Pierre my French sort of fell to pieces slightly. I felt I was in the presence of someone who thinks deeply about his wines. I don’t know whether that impression is correct, but it was clear that my French doesn’t go deep enough to say what I wanted to say much of the time. Because these wines are just so good. 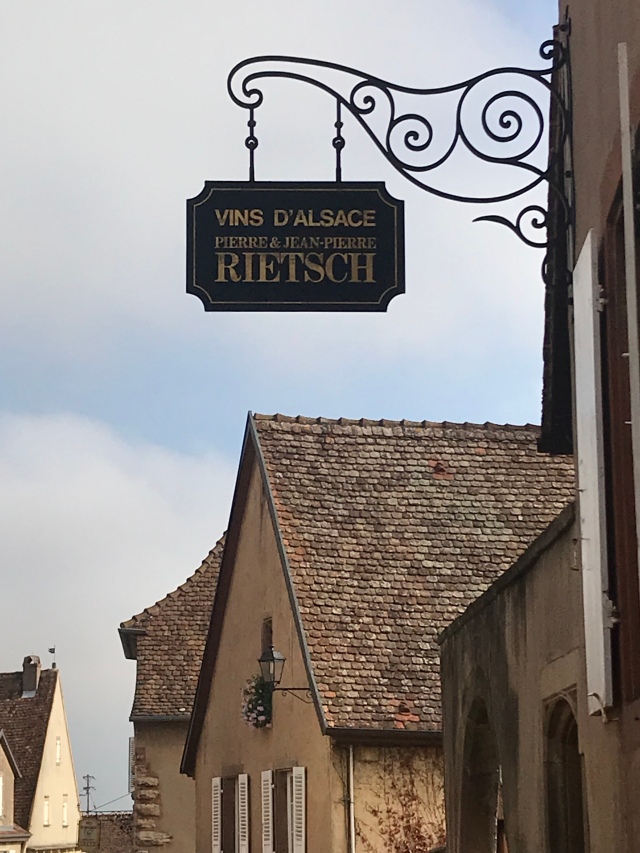 I think I’d go as far as saying that they are the best Alsace wines I’ve tasted for a long time, and I should add that this is in a region from where, month on month, I’ve been tasting more and more fantastic wines these past couple of years.

The tasting room at Domaine Rietsch has a very nice feel to it, an aura which felt almost Japanese to us. I think it was the lovely table which reminded me of a torii gate.There was something more ordered about it than, for example, the jumble of bottles and boxes chez André Durrmann the previous afternoon. The labels here are magnificent too. There is no obvious theme through the range, except the unity of artist. But it all adds up to a suspicion that absolutely every single detail matters for Jean-Pierre.

The thing to remember here is that these are very much wines of terroir, intended to express variety, of course, but equally or perhaps more so, place. Rietsch possess vines in the Grand Crus of Wiebelsberg and Zotzenberg, but also in sites like Stein (limestone, near the domaine in Mittelbergheim), Brandluft (clay, limestone and sandstone, on the road to Andlau) and Heiligenstein. This village/site north of Mittelbergheim used to have no reputation despite its own AOC for Klevener de Heiligenstein (clay and sandstone on which is planted the rare Savagnin Rose grape variety).

We opened with the Crémant d’Alsace Extra Brut 2014 (disgorged July 2017 with 8mg/l residual…note milligrams, not grams). Coming in with a fairly standard  12.5% abv it has the adition of a little fresh juice from the following (2015) vintage, an ancient method revived here. The wine is fresh, and has a bracing mineral acidity, with a very nice backbone and great mouthfeel. Like almost all Crémant from the region, there is not great autolytic character building at present, yet the nuttiness does nevertheless suggest complexity. Along with the fine nature of the wine, you will think it one of the best Crémant d’Alsace you’ve tasted. It is a blend of Auxerrois, Chardonnay and Pinot Gris, all picked ripe. 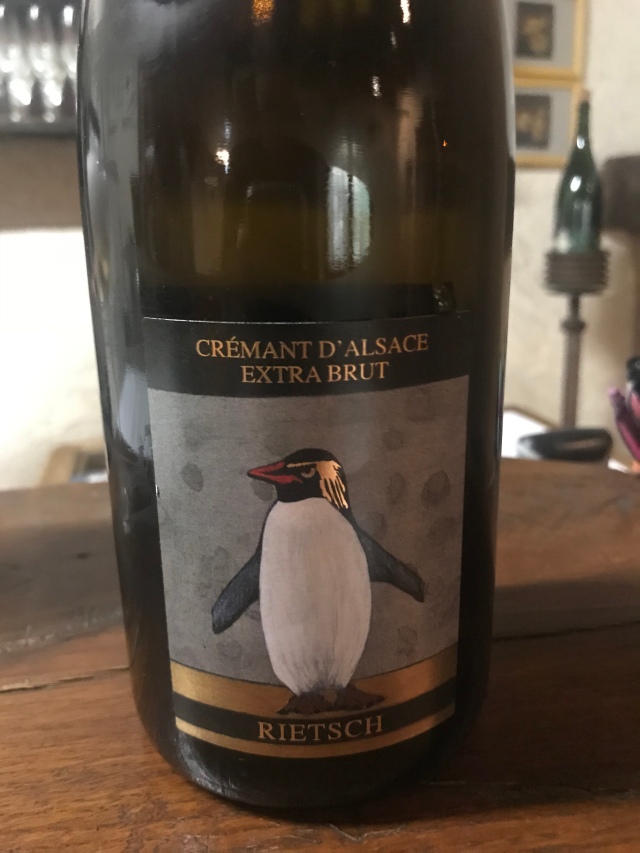 The domaine’s Sylvaner Vieille Vigne is an assemblage, in this case 50:50 from 2015 and 2016, from vines grown on argilo-calcaire (clay-limestone) soils. As with all good Sylvaner, you begin with fresh and fruity, with a misleading mirage of simplicity. But then it builds in the glass. Its greatest attribute, for me, is salinity. This (though not salinity alone) makes it multi-dimensional, which is achieved less often than not with Sylvaner. Certainly not a wine to ignore when purchasing (and I did buy some of everything I tasted, and one or two I didn’t).

I won’t list the tech details for every wine, but to illustrate the thoroughness of the labels I can tell you that this wine underwent spontaneous fermentation using indigenous yeast strains, and that it was aged on lees in cuve. It contains 12.5% alcohol by volume, 2.2 g/l of sugars, and 16 mg/l total SO2. Jean-Pierre said he will use a little sulphur to combat volatile acidity if he deems it necessary, but will avoid adding it if possible. 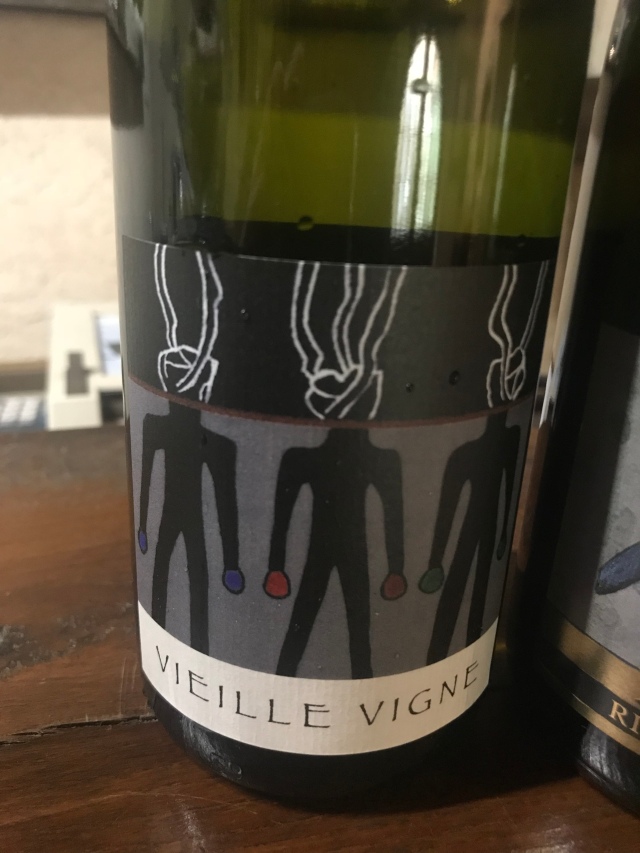 Stierkopf 2016 is a varietal Auxerrois from both granite and clay-limestone. No sulphur is added. The sensation here is lemon citrus, fine, fresh, fragrant and if I say “uncomplicated” I don’t mean that as anything but a compliment. The most complicated thing about this wine is to decide whether I’d use it as an aperitif, or to partner food. My cop-out would be a summer lunch outdoors. Vibrant and refreshing, and I think it will age too. In fact I think all these wines will benefit from age and I plan to hold off drinking anything I bought for now, hard as that will be. 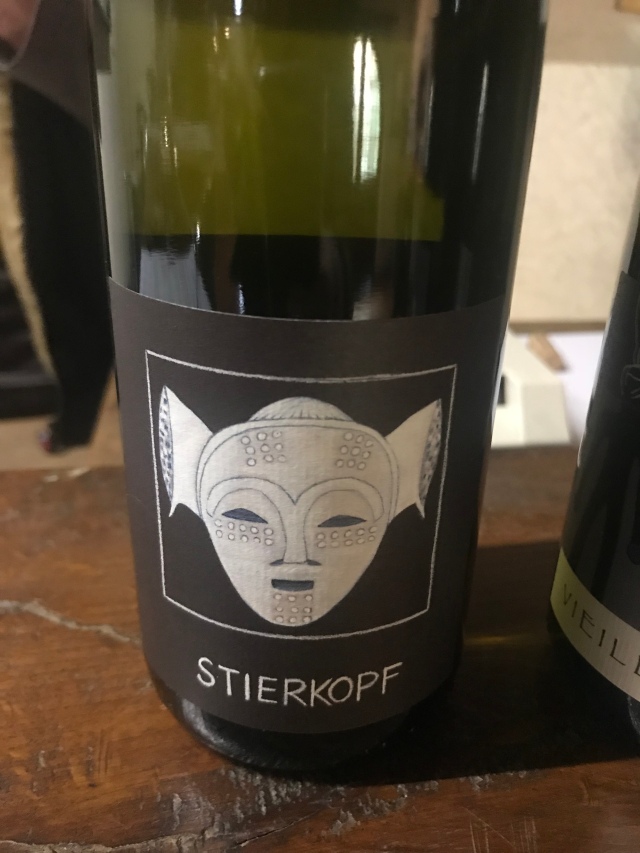 Murmure (whisper) is the first of the maceration wines. No sulphur, seven days skin contact, 11% alcohol. The very best Muscat grapes (naturally we are speaking relatively here at a domaine which would reject any sub-standard berry) are direct pressed and the rest of the bunches are added later. There is a fresh acidity rarely found in Muscat, and a bit of texture from the maceration of the skins. It has a little CO2 present at first in the glass, which of course helps protect this zero added sulphur wine.

Along with the more floral notes that we associate with the Muscat varieties, you will also find yellow fruits, and a little tannin from the skin contact, perhaps less than you might expect. It’s very elegant, and mixes a precision, also rarely found in Muscat, with something evolving more broadly as it warms. 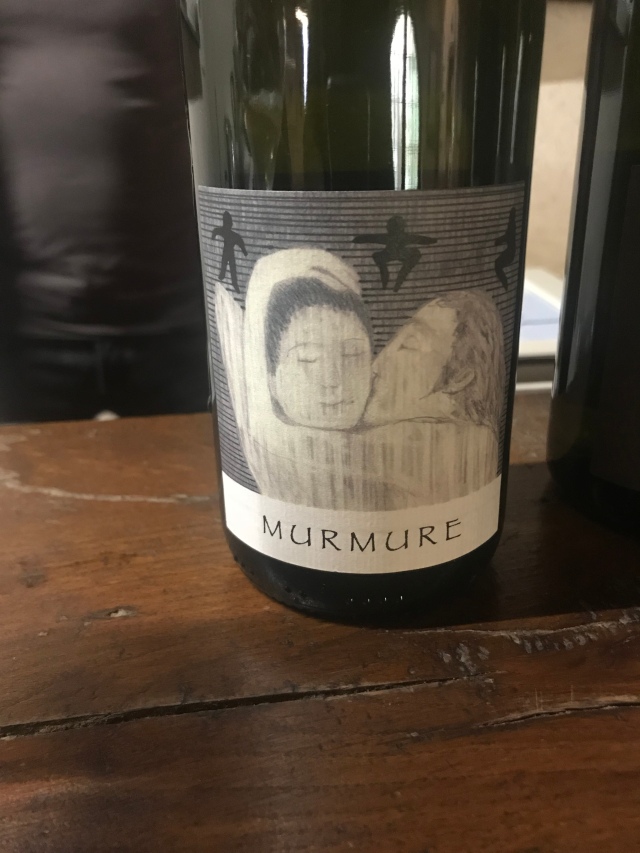 The grape variety, as I already mentioned, is Savagnin Rose, not a Jura variety but a Gewurztraminer variation. At 13% abv, it has spent eleven months on lees in demi-muid. It is made only in even years. The colour is a lovely gold with flecks of pink-bronze. The nose is pear with dried fruits emerging, and the palate finishes with a lick of bitterness, which Jean-Pierre describes as a taste of the stalks. I’m reminded of Andrew Jefford in Decanter writing that the best wines sometimes have a certain unloveliness about them. For such an unrecognised terroir (in quality terms), this wine really makes you think long and hard, and also makes you concentrate. You can’t “get” this with one sip on a tasting bench, but it is impressive. 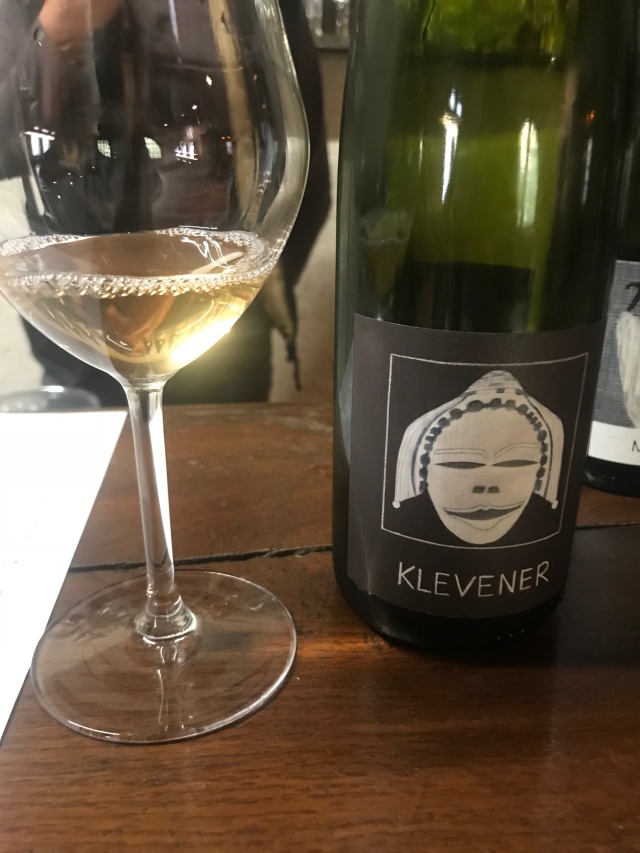 Pas A Pas is made in odd years only, explained by the fact that it comes from a réserve perpetuelle (which we loose talkers might call a solera, though most French vignerons I know prefer the former terminology). The cuvée name means step by step.

The grape variety is Savagnin Rose again, but here in a darker bronze cloak. The aromatics are rich and complex – quince, tarte-tatin, some oxidative notes…it is a quintessentially autumnal wine which felt just right for the cold but sunny weather of our visit. It also has somewhat more of a hint towards the Savagnin of the Jura with that oxidative, nutty, finish. I would suggest that you just fry up some wild mushrooms and you are away. As with the Klevener above, don’t serve it too chilled. 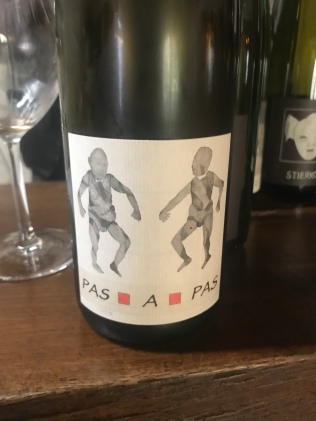 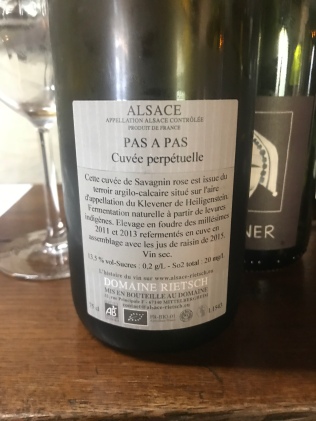 I said that the Muscat was not particularly representative of the variety in the region as a whole (a good thing!), and the same can be said of Jean-Pierre’s Gewurztraminer, Demoiselle (we tasted the 2016).

The grapes are picked right at the start of the vintage. The intention is to avoid excess maturity and excess alcohol, although this 2016 reached 14%, but you’d never guess from tasting it. Fermentation is partially whole berries, for 16 days, and then it spends six months on lees.

The colour has a gentle orange tinge, and the bouquet has something of orange citrus about it. Again, there is complexity, doubtless from the different individual sites where the fruit comes from, and that includes a certain minerality almost never found with Gewurztraminer. This is the second brilliant wine made from this grape I’ve tried this autumn, the other being Gut Oggau’s Emmeram. As I said when writing about that Austrian wine, such bottles change one’s perception of Gewurztraminer completely. Let’s not forget to mention the fresh acidity and fruit here, almost unheard of for decades in the region. 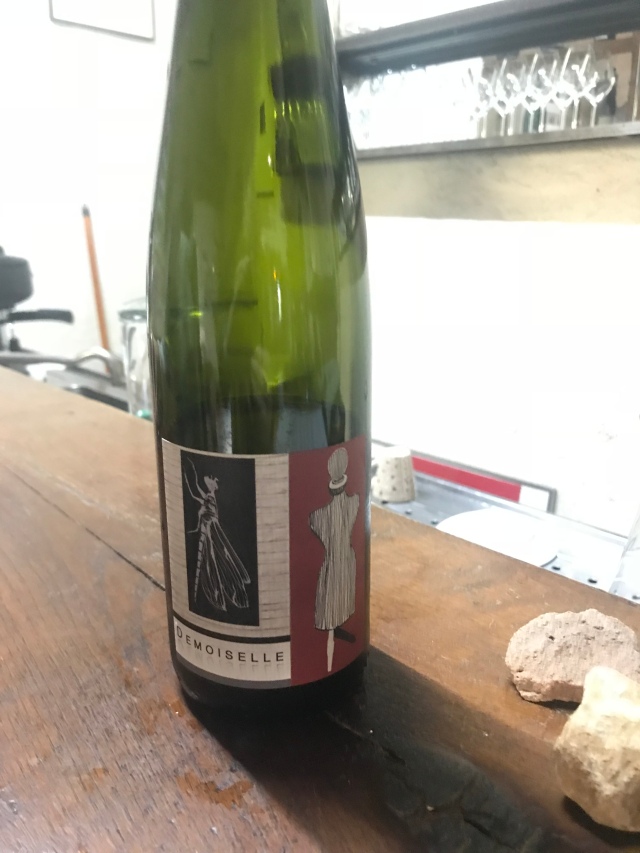 You might ask why I only tasted seven wines? Whilst I had taken at least an hour-and-a-half of an obviously busy winemaker’s time, it was evident Jean-Pierre would have let me taste everything if I’d asked, but I like to try to balance selfishness with some thought for a welcoming host. And besides, despite what I said, we did talk a lot. I did take away some Grand Cru Riesling, and J-P especially recommended the Zotzenberg Sylvaner Grand Cru 2014 as well. Sylvaner was not part of the original plan for listed varieties in the Grand Cru regulations, but it is obvious that the variety has undergone a massive revival in quality all over the region. On a top site it can be transformed.

Site is important, but so is cultivation. Zotzenberg is composed of iron rich sandstone with limestone, with a pure southern exposure. The must sees 36 months on lees, in demi-muid for the first year before transfer to stainless steel vat.

These wines are “natural wines”, yet about as far removed from the weak stereotype as it is possible to be. They are also, as I perceive, thoughtful wines, or at least I find them thought provoking. No vin de soif “glouglou” for me. I hesitate to say “profound” as that kind of language is much over used in wine writing, but these are wines which require concentration and focus to fully appreciate.

Jean-Pierre seemed to enjoy talking about his wines, albeit in a measured way, and I felt almost ashamed that, in this instance, my linguistic ability let me down. He probably didn’t appreciate just how bowled over I was about the wines we tasted, and how much I appreciated his time and patience. I’m not into calling wine producers “popes” and such like, but I think we could all learn an awful lot at the feet of this master vigneron. 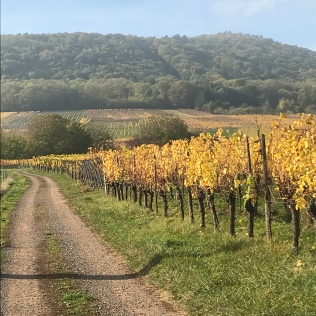 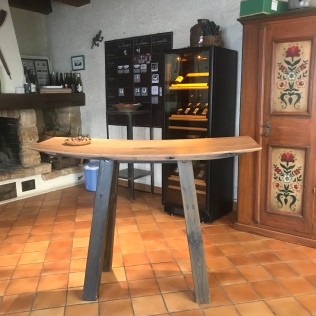 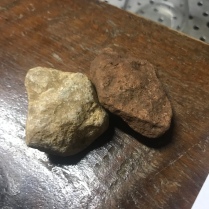 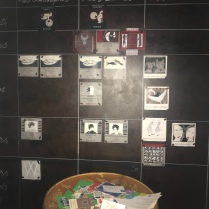 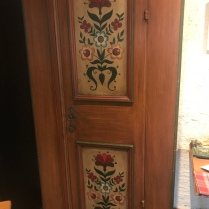 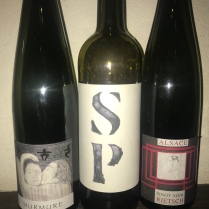 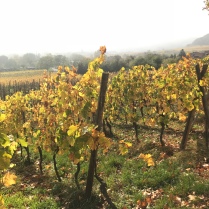 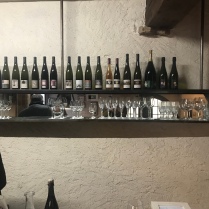 A few photos from the Rietsch tasting room and the vineyards around Mittelbergheim. Did you spot the Partida Creus on the bottom row, untouched by Jean-Pierre since Severine Perru from New York’s Ten Bells placed it there during harvest?

Of course, Mittelbergheim boasts other good natural wine producers, and if you have time, don’t neglect the one below. He’s also very good indeed. 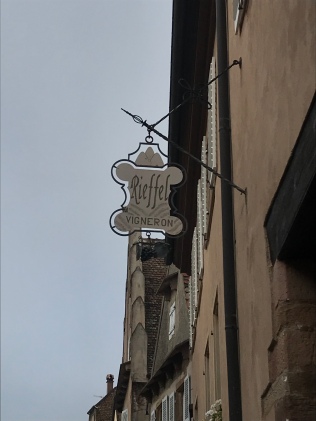 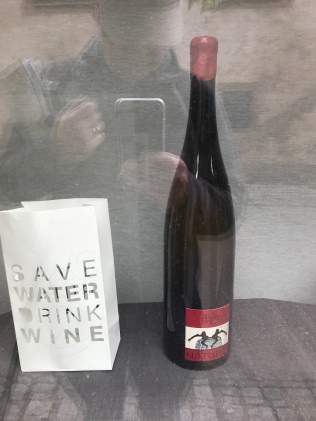