In this final part of my article on March 2017’s Vaults Tasting I want to concentrate on the wines of Peter (Florian) Lauer, imported by Howard Ripley, but of course there were some other wines I had to try among the many crowding their table, one or two of which will merit a mention.

Weingut Peter Lauer is now under the management (since 2005) of Florian Lauer, and he was on hand to pour. I’ve been a very big fan of his wines for a few years, and I was thrilled to meet him. His estate, at Ayl in the Saar, is producing a range of some of the finest wines currently coming out of the Mosel-Saar-Ruwer.

This might seem a step change from the “natural wines” I’ve been largely writing about in Parts 1 to 3, but I try to attend all of Howard Ripley’s German Tastings. For me, sulphur or no sulphur, German Rieslings are among the purest tasting wines on the planet.

In his 2012 book The Finest Wines of Germany, Stephan Reinhardt calls the wines from this estate “some of the finest, most classic Rieslings in Germany: pure, precise, piquant, racy, mineral and chiselled, but also ripe”. After that, you won’t require any tasting notes from me. It does encapsulate what Florian’s wines are all about.

One of Florian’s secrets is the estate’s sparkling wines. By law they are Sekt, by style they are Riesling Crémants. The very well priced NV has three years on lees (for a French Crémant you’d expect 12 months, maybe 18). It’s very good, of course, and I recommend it wholeheartedly, but for double the price (somewhere over £40) you can buy a Vintage 1991 or 1992. Whilst the 1991 (disgorged 2015, not on taste last Monday) is a softer wine, 1992 is bottled with no dosage. This wine is little short of amazing. It has had 24 years (years, not months) on lees in bottle, and has aromas of nuts, spice and salt. It’s dry, the acidity is a pure rapier thrust (gets to the heart without tearing), and it sits there, complexity building as it warms.

Apparently these vintages, made by Florian’s father, were discovered in the Lauer cellars, and Florian has released them, all 3,000 bottles, into the world. In my next article, by coincidence, I’ll be writing about French Crémant, and suggesting that it is probably unfair and unnecessary to compare the genre to Champagne. But this wine is for lovers of the finest Champagne, just so long as zero dosage Champagnes don’t upset you. If you can get just one bottle! 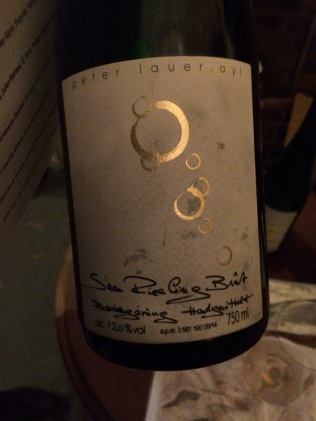 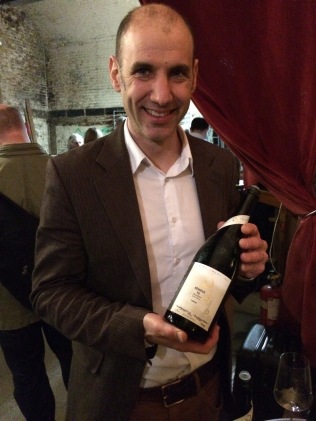 At the lower end of the Peter Lauer portfolio there is a Saar Riesling Fass 16, here shown in the 2015 vintage. Michael Schmidt, writing on Jancis Robinson’s Purple Pages, wrote in May last year that 2015 might be the real deal, the “vintage of the century”, and in such years the so-called lesser wines from the best estates invariably provide a lot more pleasure than their relatively modest prices might suggest. This might be a “basic dry Riesling” but here you are still getting a wine from the steep slopes of Ayl. It comes in at around the £15 mark all in, but the smart drinker will opt for magnums at little more than double that.

Kupp Fass 18 Riesling GG 2013 is the dry “Grand Cru”. It comes from part of the famous (or is it infamous) Ayler-Kupp vineyard, near Biebelhausen. This has rich fruit but is mineral driven. It shows the finer side of the Grosses Gewächs, that balance between ripe fruit and Riesling’s taut steel line. Great length already, but it will improve over a decade.

Schonfels Fass 11 Riesling GG 2012 is also from site which is part of Ayler-Kupp, sadly subsumed by the 1971 Wine Law. It’s a smaller site than the Kupp, the fruit is a little richer and there’s a touch of spice. But there’s a lightness too, and it often drinks earlier. Yet the vines here are 100 years old and yields are low. Neither are wines for the uninitiated, nor perhaps those who prefer Germany’s Prädikatswein, but their complexity repays those who come to love them.

But do not worry if the Prädikats route is your preference. Florian is a fan of these wines too, especially at Kabinett level. Ayler Kupp Fass 8 Riesling Kabinett 2013 has everything you want from a Kab. Elegance, freshness, minerality (or whatever you prefer to call it), plus a touch of sweetness. That sweetness comes on the mid-palate. The finish is dry. It’s so good, truly. At 7.5% abv you have to restrain yourself. I know, I bought some in Germany and it won’t last this summer, fact. 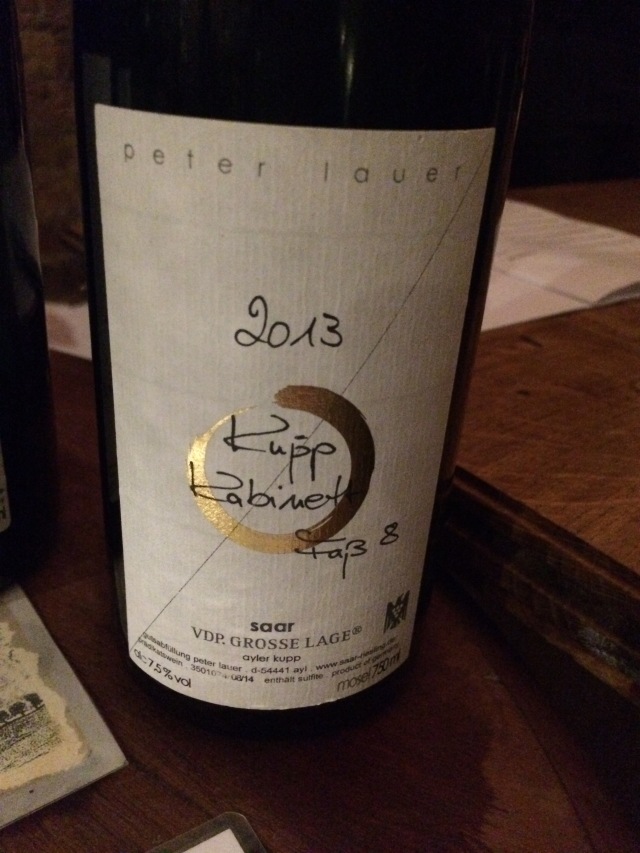 Now for the other wines I want to mention. Perhaps you’ve read my articles on previous Howard Ripley German Tastings (usually held twice a year in the Hall of one of Legal London’s Inns of Court), so you know that I’m more partial than many for German reds. One producer I’m consistently buying, albeit just odd bottles, is Ziereisen.

Weingut Ziereisen can be found down in the south of the Baden wine region, almost at the gates of Basel, at Efringen-Kirchen. Their vineyards are protected by the the Vosges Mountains of Alsace and the Black Forest. The micro-climate is therefore warm, but is ventilated by the Belfort Gap, to the west at the bottom of the Vosges, which means that growing black grapes is not as risky as you might think.

Whilst Ziereisen is well know for its reds, the first wine I tasted, true to form, was their Gutedel “Heugumber” 2015. Gutedel is none other than France and Switzerland’s Chasselas variety, of which I’ve written a fair bit in the past month or so. This may not light the fire of the average Mosel aficionado, but it’s a nice dry white, perfect as an aperitif, maybe with a bowl of salted nuts, or with cheese dishes. It has a bit more presence and a little less acidity than many examples from the French speaking regions, and in fact their top Gutedel bottling, Steingrüble, spends almost a year on lees. 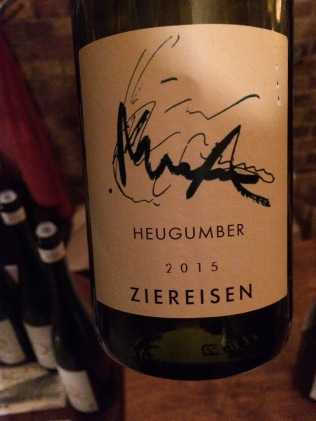 Ziereisen grow a fair bit of Pinot Noir, but if you wish to go right off-piste with them, you have to try one of their Syrahs. Jaspis is the impressive top bottling, and it is the one I know best. But if you prefer to go in a rung below, around Burgundy Premier Cru in terms of price, then Syrah “Gestad” 2012 won’t disappoint.

The vines are younger here (Jaspis is old vines, but both are grown on a barren, steep, limestone vineyard with high density planting). Ageing is in oak (25% new). There’s still scope for more ageing in bottle, but this is very good. I know not many will go right out and buy a German Syrah (the Germans lap these up, anyway, so some might think the price is quite steep for the quality), but do try to taste them if you can. The Jaspis Pinot Noir Old Vines cuvée is pretty damn good too.

Before tasting the reds, I tried several other Rieslings from estates which you would almost buy blind – Schäfer Fröhlich (Felsenberg GG), PJ Kuhn (Rheinschiefer) and Zilliken (Saarburger Rausch) in particular, but as the Howard Ripley tag says, “We like Riesling – and when that runs out we drink Burgundy”. There is one particular Burgundian grape which has always been a little unfashionable, perhaps the Gutedel of the region, Aligoté. It really seems to be making a comeback, not doubt because Burgundian Chardonnay is so expensive now, but also because in some cases yields have been lowered and the acidity tamed. 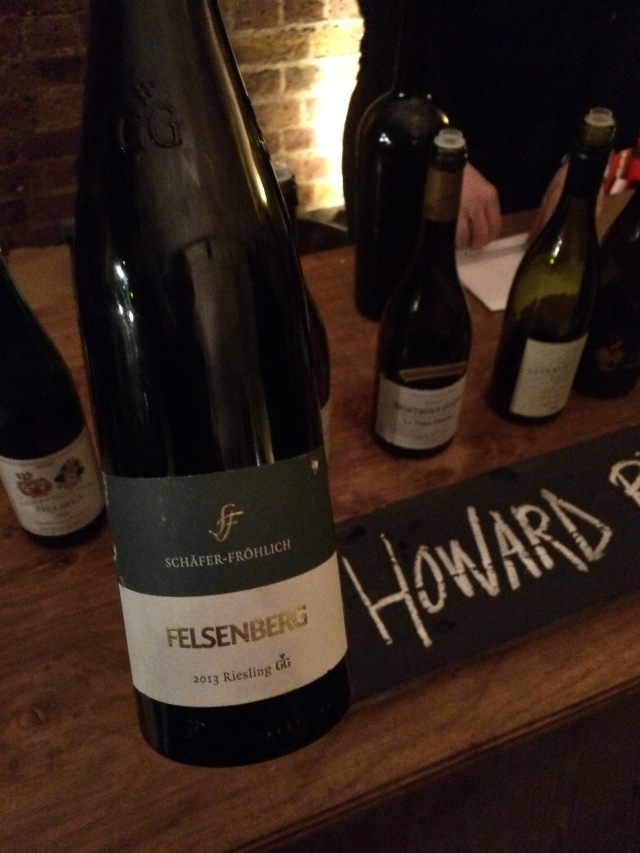 There has always been very good Aligoté. I don’t just mean Coche-Dury’s marvel (if you age it), or Aubert de Villaine’s Bouzeron. Goisot, at Saint-Bris, have always made a super version, and people as diverse as Alice and Olivier De Moor in Courgis (Chablis, but they have Aligoté at Saint-Bris) and Sylvain Pataille (single vineyard versions from Marsannay/Fixin) are really creating a stir with the grape. It seems to have a new lease of life.

I’m trying every Aligoté I can, and Howard Ripley import Jérôme Castagnier Aligoté 2015. The domaine is in Morey-St-Denis, but has vines in Gevrey and Chambolle too, including  parcels in Charmes-Chambertin and Clos-St-Denis. This relatively modestly priced Aligoté is very nice, without the acidity one came to expect of old (Aligoté really did only seem fit as the base for a Kir at one time). It even has a bit of texture from two months on lees. You’ll pick this up for under £20, if you want to explore the grape further, especially as the Goisots seem to have no wine to sell right now, and it’s a lucky man (or lady) who can source a few bottles of De Moor.

Before finally signing off from this marathon that was The Vaults VI, I should mention that there are always a few purveyors of other victuals on hand. Androuet were there with a table of very fine cheeses, as befits their status as one of London’s top cheesemongers, Urban Farmhouse were there, showing their sour and farmhouse beers, and so was The Charcuterie Board, who wholesale and retail fine British cured meats (also representing Moons Green and Native Breeds, two of the UK’s foremost charcuteries).

If you are a member of the Trade, or Press, do try to devote some time to The Vaults next time they are showing. It’s one of the best wine gigs in town for the sheer variety of wine we get to taste. But guys, try not to hog the tables and give others a chance to taste.

Writing here and elsewhere mainly about the outer reaches of the wine universe and the availability of wonderful, characterful, wines from all over the globe. Very wide interests but a soft spot for Jura, Austria and Champagne, with a general preference for low intervention in vineyard and winery. Other passions include music (equally wide tastes) and travel. Co-organiser of the Oddities wine lunches.
View all posts by dccrossley →
This entry was posted in German Wine, Wine, Wine Agencies, Wine Merchants, Wine Tastings and tagged Ayl Saar, Florian Lauer, Howard Ripley, Jerome Castagnier Aligoté, Saar Wine, Vaults Tastings, Weingut Peter Lauer, Ziereisen Baden, Ziereisen Gutedel, Ziereisen Syrah. Bookmark the permalink.

1 Response to Return to the Vaults Part 4 – Howard Ripley