Liem and Larmat – A Perfect Combination

Like most people, I imagine, I came to appreciate Champagne first as a celebratory drink. Most often it was the non-vintage wine of a well known Grande Marque, or occasionally a vintage wine, consumed several years too soon. But in the days before autoroutes would take you right through France, Champagne (the region) became a convenient, and frequent overnight stop. As these journey breaks somehow came to encompass an extra day for exploring Reims, Epernay, or the Montagne, I began to appreciate Champagne, the region and her vineyards, and in particular, two things about it.

First, I realised that whilst the Grandes Marques usually blended their wines from multiple sources creating something which claimed the whole to be greater than the sum of its parts, there were hundreds of small producers bottling wine from their own few hectares of vines. Not all were as good as each other, but some were certainly good enough to distinguish the attributes of their different parcels.

Secondly, I came to appreciate Champagne as a wine in its own right, and I came to this through following the lead of the locals and drinking it throughout a meal. When you drink it as an aperitif you fail to appreciate its versatility with food, because there is a Champagne somewhere that will go with the majority of dishes.

I own several books on Champagne, but this year Peter Liem has published one which I think is different to all the others. Champagne (Mitchell Beazley, 2017)  is firmly focussed on terroir and so it is a book about those who grow grapes and make wine which expresses a particular vineyard, or perhaps a small number of sites where each plot contributes discernibly to the cuvée. This categorically does not limit us to “Grower Champagne”, because plenty of the Grandes Marques make site specific wines.

The book, in making terroir its focus, also celebrates Champagne as a wine, in all its diversity, and indeed takes this diversity as a mark of quality, rather than one over-arching single standard by which Champagne should be judged. To push the terroir point further, Liem has included in the package, published to the general public for the first time since they were produced in 1944, the maps of Champagne created by Louis Larmat for his Atlas de la France Vinicole: Les Vins de Champagne.

These colour maps come as separate fold-out sheets housed in a pull-out drawer, a second drawer containing the book. For a map geek like me they provide a cartographical bounty beyond my dreams. I’ve seen some of these maps in one or two tasting rooms, though possibly in facsimile as only 150 original copies of the Champagne part of the Atlas Vinicole were produced at the time.

Other books on the subject tend to focus more on the process of making Champagne. That requires so much space as to make viticulture a bit of an unwanted intrusion. This despite the modern mantra that wine is made in the vineyard, one espoused by all of the finest producers the world over these days. As a consequence pretty much all I ever learnt from those books was that the Champagne Region is based on chalk. Whilst I’ve since been told a more nuanced story by producers, I had no idea of the sheer diversity of soil types in the wider region, not least the vastly different types of chalk alone, which affects the fruit produced above them. I learnt a lot about geology, yet you should not suppose that this is solely what the book is about, nor that its approach is in the slightest bit dry.

Champagne divides into three parts. Understanding Champagne does cover the usual history and winemaking, but also features chapters on “The primacy of place” and on farming methods, including organic farming and the increasing interest in biodynamics.

The Place comprises eight chapters , which among other things break down the region into more sub-regions than the casual Champagne drinker will be aware of. Aside from the usual distinction between the Barséquannais and the Bar-sur-Aubois in the Côte des Bar, we also have The Grande Vallée made distinct from the Valley of the Marne, and the introduction of the Coteaux du Morin as the distinct sub-region to the north of the Côte de Sézanne. You will also come to appreciate the growing importance of the Coteaux Sud d’Epernay and the once densely planted Vitryat.

In these chapters Liem talks us through individual wines made within the different terroirs of these sub-regions, and in doing so he is able to describe in real terms what the land contributes to each of these cuvées. This is how he brings the terroir alive. Each chapter ends with a list of recommended “Single-Cru and Single-Vineyard” Champagnes from each of the major villages in each sub-region, which are usually wines created by producers discussed within the chapter.

I mentioned above that by no means all of the site specific wines in this book are created by small artisanal growers. My own introduction to single vineyard Champagne came via the oft ignored Champagne House of Philipponnat. Their Clos des Goisses is still my favourite Champagne, and a photograph of it features on both my business card, and as one of the changing header photos on this site. Taittinger’s “Les Folies de la Marquetterie” has always been another (more affordable) favourite, yet I had no idea that Roederer’s “Cristal Rosé” was such an exemplar of Cumières Pinot Noir (with added finesse from a proportion of Chardonnay from the Côte des Blancs).

The final part of the book covers The People. Here, you don’t get the lengthy profiles you’ll find in some other books (Michael Edwards’ The Finest Wines of Champagne is a good source for these). Neither do you get any rankings of different wines and producers, as you get in the well known “Champagne Guides”. This section attempts to briefly introduce the individuals behind the exciting revolution which has been taking place in the region, and Liem has chosen both growers and négociant houses who he considers have “contributed to illuminating issues of terroir and advancing contemporary themes…”. Offhand, I cannot think of anyone he’s left out.

I will say straight off that this is my Wine Book of the Year (up to this point I’d probably have chosen John Szabo’s Volcanic Wines, and of course I’m looking forward to Luis Gutierrez’s new book on the new generation of wine producers in Spain, the English Language edition of which is due to come out in December).

It is a beautifully put together book, with lovely photographs by Gentl and Hyers. Any criticisms would in reality be not only subjective, but irrelevant. It did sometimes frustrate me that the beautiful photos generally only have a caption when they are a portrait of a wine producer. Several times I thought “where’s that?”.

There are several “insert” sections to emphasise a point, and whereas they are a useful focus, they do occasionally split up the thread of the general narrative in annoying places, so that you have to find where the argument continues and go back to the insert when you can better draw breath. And I think Peter could have written a little more about the Côte des Bar, where perhaps more than any other sub-region, there has been a grower revolution in what was once Champagne’s backwater. But then again, on the Côte des Bar subject I’m thankful that I’m not the only person who adores well aged Rosé des Riceys, especially those of Olivier Horiot and his single vineyard bottlings, which gets a whole page.

Nevertheless, minor points like these aside, I doubt that anyone who truly wants to get under the skin of Champagne, both the region and the wine, will find a better source, and a more readable and enjoyable source too. Peter Liem has lived in Champagne for many years, and his web site, ChampagneGuide.net, is one of the most renowned sources of information on the region’s wines and producers, but his experience goes back much further. He is, of course, also one of the organisers for La Fête du Champagne, an event which began life in New York and is probably unparalleled as an exclusive Champagne Tasting.

I only weep at the wines he describes and recommends. Many I know, of course, others I have heard of and long wanted to taste, whilst several are completely new to me. When I first became interested in (or possibly addicted to) site specific Champagnes I was probably seen as a little odd. But so what, I could afford to buy a good many of these wines back then! Prices have risen inexorably. £30 single-site wines now cost £50, and the £50 treats of old soon reached £100 (I’m thinking specifically of favourites like Clos des Goisses and Pierre Péters’ Chétillons).

Producers who a decade ago were relatively unknown names, occasionally spotted on the shelves of The Sampler in Islington, and those of a few similar pioneers selling Grower Champagnes, are now praised as the stars who, along with a select coterie of Chefs de Cave from several Grandes Marques, are moving the whole of Champagne forward, making the wine so much more relevant and meaningful for the twenty-first century wine lover. Champagne is no longer just bubbles to spray about frivolously at a big event, but a genuine wine, like any other, as versatile as any other, and like the best wines from any region, just as expressive of place as any other.

I know it’s expensive as wine books go (£60 rrp in the UK, though I did find a hefty discount at a well known online retailer), but if you love Champagne you need this book. 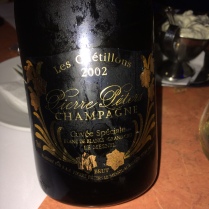 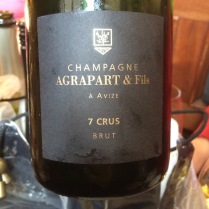 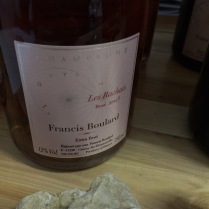 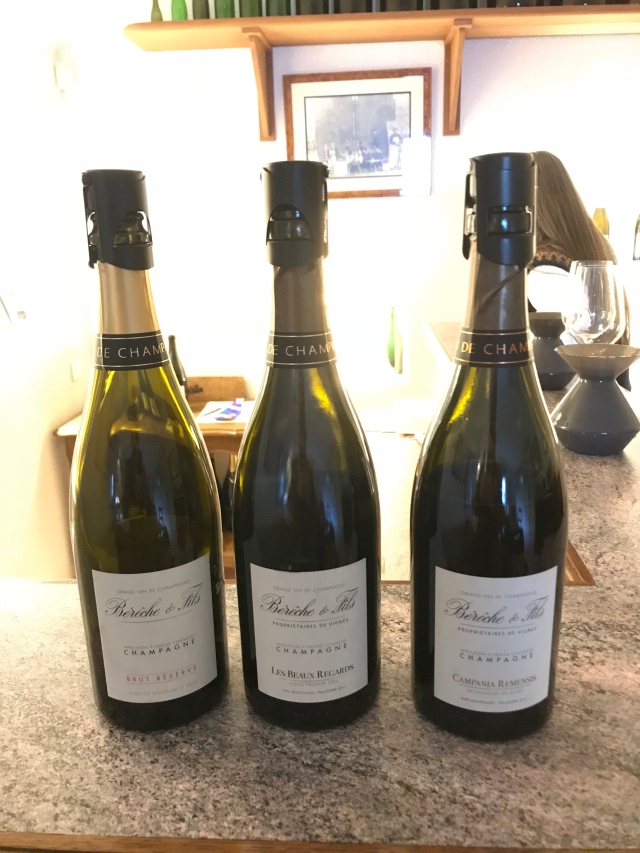 Writing here and elsewhere mainly about the outer reaches of the wine universe and the availability of wonderful, characterful, wines from all over the globe. Very wide interests but a soft spot for Jura, Austria and Champagne, with a general preference for low intervention in vineyard and winery. Other passions include music (equally wide tastes) and travel. Co-organiser of the Oddities wine lunches.
View all posts by dccrossley →
This entry was posted in Champagne, Sparkling Wine, Wine, Wine Books and tagged Champagne, Champagne Books, Champagne Viticulture, Grower Champagne, Larmat's Maps of Champagne, Louis Larmat, Mitchell Beazley, Peter Liem, Site-specific Champagnes, Wine Books. Bookmark the permalink.

8 Responses to Liem and Larmat – A Perfect Combination