Back to the Future

I do write the occasional Review of a wine book, or DVD, though I haven’t done so recently. I haven’t actually read any new wine books for a while, not since Stephen Brook’s Wines of Austria, and that was almost a year ago. I’m actually quite shocked by that, it’s unlike me. I have one or two on my “to read” list, but I am constantly re-reading or dipping into older books. It was doing just that, whilst undertaking a bit of research for a recent article, that I picked up The Future Makers by Max Allen.

Max Allen is not all that well known in the UK, but is far more widely read in his native Australia. He’s written several wine books, and had various columns, and it seems he recently joined AFR (Australian Financial Review), though he appears to be well protected by their paywall. I got to know his work initially via copies of Austalian Gourmet Traveller. Back at Christmas 2010 an Australian friend flew over with a 400pp+ doorstep of a book called The Future Makers. I lapped it up, and even now, six years on, it’s still one of the most enjoyable wine books I’ve read this decade. I’ve read it cover to cover three times now. Most of my wine books manage just twice.

At that time I was just coming back to Australian wines. Like many I had begun appreciating wine just before the Australian wine revolution hit the UK in the 1980s. The Oddbins chain had already begun to popularise the country, and brands such as Rosemount with their oaky Chardonnay, and Penfolds, with their Koonunga Hill and other reds, were on the lips of everyone I knew who went as far as actually discussing wine. There was a place off The Strand, in London, called The Australian Wine Centre, where I’d occasionally slink off to in my lunch break and come back with bottles such as Parker Coonawarra Estate, St Hallett Old Block Shiraz, Charles Melton Nine Popes, or McWilliams Elizabeth Semillon.

As we all got older, the lustre wore off many of these wines. Elizabeth excepted, the alcohol wore us down a bit. These “sunshine in a glass” wines were just too big for our ageing palates to sustain an interest for very long. There was a period during the 1990s and early 2000s when I bought little Aussie wine. The exceptions were South Australian Riesling (Grosset etc) and the more restrained genius of Canberra District’s Clonakilla, and what I always thought were rather special wines, Jasper Hill (Heathcote).

Two things happened towards the end of the 2000s. The first was a trip to Australia which included my first visit to Melbourne, and Victoria. I visited several wine regions around the bay, including Yarra, but I really fell in love with Mornington Peninsula. Both as a place, and as a wine region, and especially Kooyong and Ten Minutes by Tractor. We managed quite a bit of sampling over the few days spent there, and I was able to appreciate especially the Chardonnays and Pinot Noirs in situ. These wines were not always lower in alcohol, but there was always freshness, and often, restraint.

The second thing that happened as a result of that trip, was that on my return I began to seek out new names, producers who seemed to be making wines with great fruit, but with a similar freshness to that which I’d experienced on Mornington, yet which seemed to be lacking in some of the bigger, oak-influenced wines I’d fallen out of love with. Early discoveries included Castagna, Sorrenberg and Giaconda (all Beechworth), plus Bannockburn and then By Farr (Geelong).

As the decade reached its end I was starting to hear other names, often from South Australia. Anton van Klopper (Lucy Margaux/Domaine Lucci), William (Bill) Downie, Luke Lambert, Timo Mayer and eventually Tom Shobbrook. It was when I wanted to read about the last of those that I returned to Max Allen’s book. Everything is there. Back in 2010 Allen was visiting, and had built relationships with, most of the people who now constitute modern artisanal Aussie wine. Over the years it has proved a wonderful resource. Not all the new names are here, but of the many artisans who we see gaining popularity today, a good number were getting established or just starting out when Allen wrote The Future Makers.

The book actually begins with a disclaimer. Allen suggests that Australian wine is a turbulent industry. He warns that by the time we read his book, several producers may well have closed down, or sold up. It is a testament to his knowledge, to how firmly his finger was on the pulse, that very few have. It is also a testament to the popularity of the artisan winemakers who form so large a part of his book. They have proved, indeed, to be the people who have made the future, at least in so far as they are the dynamic drivers of modern Australian wine. As the large multinational corporations which had taken over Aussie wine in the 1980s and 1990s hit the wall, unable to grow their businesses in difficult market conditions, constrained by the cost pressures of large volume production, it was the artisans who kept the flag flying, especially as guardians of quality and diversity.

Part I of the book is called The Big Picture, and sets the scene. Changing climate (higher temperatures, less water) has challenged industrial winemaking, on which this country began to rely for ever growing exports of their sunshine in a glass. One way to conquer these threats of nature was for people to rediscover the old traditions and winemaking methods, whilst looking for new grape varieties more at home in hotter, drought prone, conditions.

Part 2 is a run through the wine regions. There’s always a précis of what’s going on, then a discussion of the best producers, some of whom are covered in a paragraph or two, whilst others are given a special section of a whole page, or two. Although not all of the producers featured would remotely fit into the broad category of “natural winemakers”, there is a thread of sustainability running right through. Allen’s affinity with the natural wine movement is clear (you’d have been able to attend talks by him at “Rootstock”, the big Australian natural wine fair, last year). In Allen’s own words, he focuses on “the newcomers and old-timers, the artisans and entrepreneurs, the ratbags, larrikins and dreamers putting the heart and soul back into Australian wine“.

It’s a great book. Now for the rather disappointing bit. I’d have loved to say that you can pick up this wonderful book at a famous online shop beginning with the same letter as the author’s surname, but you can’t. Unless you are willing to please some hopeful seller who has the temerity to ask £399 for a used copy. They do happen to be able to sell you a copy for Kindle for a mere £12 though. The physical book is actually really attractive, printed on nice matt finish paper with plenty of photos. But I guess if your book shelves are already heaving with wine books, Kindle may be the answer.

Having read dozens of wine books over the years, this would almost certainly make it into my desert island dozen, so if you do happen across it in a second hand book store, or on some obscure online site, it’s worth grabbing a copy. Australian readers might well have greater luck on that front. If you are thinking of flying home with one, do beware – it’s going to take up almost one-and-a-half kilos of your baggage allowance. It makes my friend’s gift even more generous. 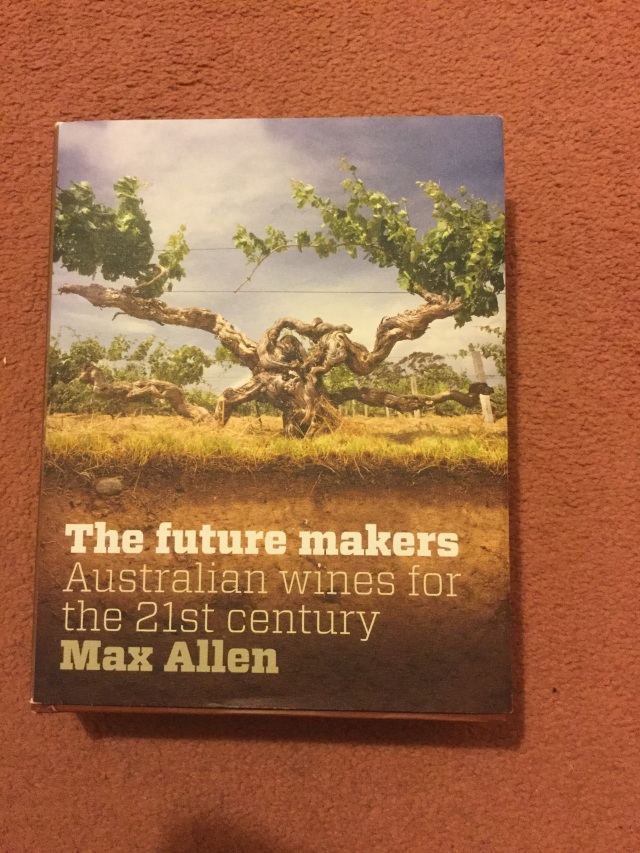 Writing here and elsewhere mainly about the outer reaches of the wine universe and the availability of wonderful, characterful, wines from all over the globe. Very wide interests but a soft spot for Jura, Austria and Champagne, with a general preference for low intervention in vineyard and winery. Other passions include music (equally wide tastes) and travel. Co-organiser of the Oddities wine lunches.
View all posts by dccrossley →
This entry was posted in Australian Wine, Wine, Wine Books, Wine Writing and tagged Books on Australian Wine, Max Allen, The Future Makers, Wine Books, Wine writing. Bookmark the permalink.

2 Responses to Back to the Future