In 2010, when Max Allen featured Tom Shobbrook in his seminal work on The Future Makers of Aussie wine, Tom had only been back in Australia for three years. He was embarking on a ten year plan to convert his family’s properties (his parents’ in Seppeltsfield and his partner’s at Ebenezer, in South Australia’s Barossa Valley) to biodynamics, but Max had his finger on the pulse, and knew Tom would go places. It’s now 2017, and what better time to have a look at how he’s getting on.

Those who know Tom’s wines, which certainly includes all the on the ball wine writers I can think of, are aware that he’s becoming one of the real stars of The New Australia. These are natural wines, with minimal intervention (including low sulphur additions), many being fermented and aged in concrete egg. Eight wines were on show at Winemakers Club yesterday, along with one exceptional treat (more of that later). Winemakers imports Tom’s wines, and in fact has been their champion in the UK for several years.

Reddish Cider 2016 is an unusual name for an unusual product. You do have to see the humour here. The classic criticism of natural wine is that it all tastes like cider, and this is just the thing to serve blind to such a person. When they scoff, you can point out to them that it is in fact a blend of pear cider and Mourvèdre (50:50). The two elements are fermented separately, of course. It’s an unusual product. There is certainly wine there, on the palate, but the cider element dominates in terms of acids and texture. What an idea! And it tastes, to be honest, bl**dy amazing. True glugging pleasure, and only 10.7% abv. 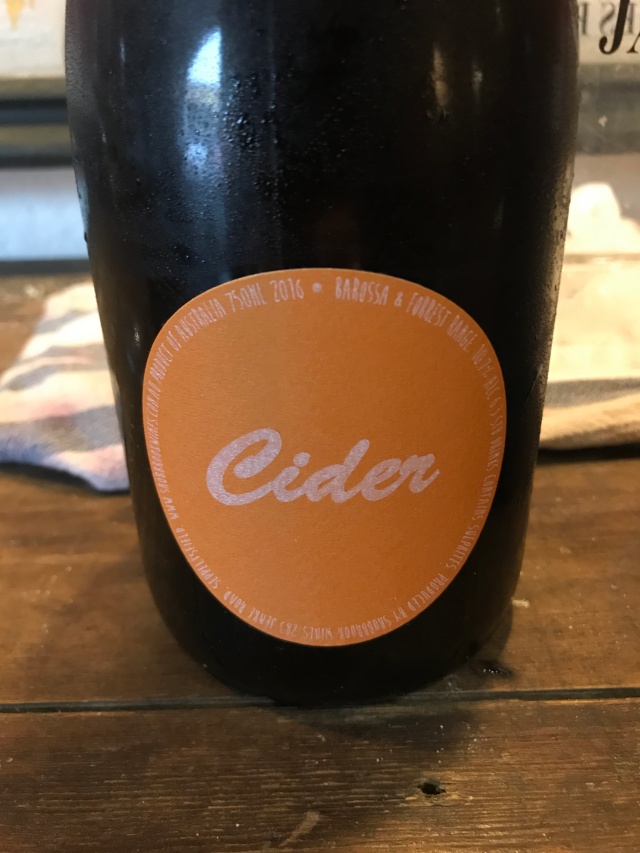 Sammion 2016 is Tom’s Semillon. I always wondered what the name signified, and now I know. Tom’s little brother is called Sam. This comes from two plots, one of 55-y-o vines, the other, 110 years old. It spent 15 days on skins in egg, was pressed, and then saw 7 months (Tom’s magic number) in egg to follow. A lovely wine, a bit richer than the previous vintage by my recollection, something which I think can be said of all of Tom’s 2016 “whites”. The Semillon fruit is plumpish, and quite long on the finish, rounded off with a little bite.

Riesling 2016 doesn’t necessarily smell like Riesling at first sniff. There’s something else going on here, but what is it? The grapes get a 12 hour maceration, but the egg is not quite fully topped up for later ageing. This allowed a thin layer of flor to form. The wine is reasonably rich, but fresh too. Colin said he thought people might not notice the Sherry-like note unless told about the flor, yet it is there, clear as day. But then I am a Sherry and Vin Jaune nut! It appears on the finish, almost as an afterthought and it adds the subtlest of complexity. So don’t knock it back too quickly. Let it build in the glass.

Giallo 2016 is a blend of Semillon, Riesling and Muscat. The varieties receive varying degrees of skin contact when fermented separately (12 hours to 12 days), before they are blended together for ageing, for the magic seven months, in egg. In some ways this wine is Tom’s signature, perhaps his best known among aficionados. It’s pale orange-gold in the glass, slightly cloudy, and beautiful on the nose. That Muscat is really concentrated and very ripe, showing apricots over the grapiness. The palate finishes with a beguiling apricot/peach sourness, and a little texture to ground it. Very long. Very delicious.

Cinsault 2016 – I told Colin that the Giallo was the first Shobbrook wine I drank, but actually, I now remember the Cinsault was. My wife bought me a bottle (with the old white label) soon after Winemakers opened (when her office was conveniently very close). This comes from a patch of just two rows of vines (27 ceps in total), the only Cinsault in Vine Vale. In fact they were due to be pulled before Tom bagged them, so to speak. There’s a three week maceration with some whole bunches, after which the wine gets the customary 7 months, but this time in one old 5hl barrel.

The colour is lovely and pale, a joy to look at. It smells of smoky cherries, and on the palate there’s a bitter cherry note with fresh and lively acidity. It’s a lovely vin de soif, although on second taste a fine grained texture shows that it will not be wasted on food.

Novello 2015 is, Tom would not be afraid to admit this, the wine he makes from his leftover grapes. In fact Novello tends to have an Italian character, whilst Nouveau is more French. In 2015 Novello was comprised of Nebbiolo, Grenache, Syrah and Muscat, the Nebbiolo giving the Italian slant. But the addition of Muscat here is interesting. It really lifts the blend, adding fragrance. Pure glugging pleasure. Seven months in egg, again, for this wine.

Clarott 2015 is made up of between 80% to 90% Merlot with a dash of Syrah. The regime here is 12 months in stainless steel tank, and the resulting wine is upfront and simple (not in a bad way, in fact it’s truly delicious). The nose has very plummy Merlot fruit (the grapes are picked pretty ripe), but there’s a nice hint of spice as well. The palate is darker, with black olives (and Winemakers’ manager Colin suggested seaweed). Although rich, and weighing in at 14% abv, you don’t really notice the alcohol when tasting. It’s that trademark Shobbrook freshness that’s ever present.

Tommy Field 2015 is the wine formerly known as Romanee Tuff (it was so-named up until this 2015 vintage). It’s 100% Syrah, which gets a three week whole bunch maceration, then a year in a 60hl barrel. This is very concentrated, and tannins are also present here, albeit the fine grained variety. Alcohol once more weighs in at 14% but the fruit is there, and boy is it silky. That will be your lasting impression. This is no Pinot Noir (which always made me puzzled at its former nomenclature), but when you let that fruit slip across your tongue, it’s pure velvet. But there’s structure enough to balance things, without turning off that spotlight on the fruit. Stealing a quip from Winemakers‘ A-board, “…the Ruff with the Smooth”.

The final wine on taste was not from Tom Shobbrook, but from his erstwhile mentor, Sean O’Callaghan. Shobbrook spent six years at Riecine with O’Callaghan in the 2000s, the Chianti Classico estate where O’Callaghan made his name as one of Tuscany’s finest winemakers. Sean left Riecine last year, following a change of ownership. Although Sean is originally from Somerset, twenty-five years making wine in Tuscany has given him a depth of knowledge and experience which few locals can boast. Winemakers Club, in the form of its founding father (literally), Robin Baum, is a partner in Sean’s new winery in Radda-in-Chianti, so expect to see his wines in the shop from now and in the future.

Il Guercio 2015 is the first of these wines. When Sean left Riecine he took with him a vat of Sangiovese. It comes from a vineyard at 700 metres altitude (one of the highest in Chianti), called “Mello”, which Sean is now leasing. He gave it three months’ whole bunch maceration in a square “Nomblot” cement tank at Riecine, and then it was aged at Sean’s new winery for a year in cement eggs (the same as Tom Shobbrook uses, shipped from Australia).

The nose is beautiful fresh cherry with a slightly ethereal quality. I think it’s very refined for Sangiovese these days. It’s also paler than many modern Sangios, none of the dark colour of added French varieties, and over extracted, over ripe fruit. This is fresh! In fact, the label looks more like that of a vin de garde but I think you will get the biggest thrill if you drink it now, on its fantastic primary fruit.

“Il Guercio” means one-eyed rascal. Sean was born blind in the right eye. He produced 1,800 bottles (and 234 magnums – I’d buy magnums but the wine isn’t cheap, even in bottle). Snap some up. I know a surprisingly large number of people who have already done so.