When a friend suggested a group of us wander down to Seasalter for the Tasting Menu lunch at The Sportsman it was impossible to refuse. Not only has Stephen Harris created a menu which the Daily Telegraph described as “no nonsense, unapologetic brilliance”, this self-titled grotty pub on the North Kent coast has recently been crowned National Restaurant of the Year. This place has been a legend almost since it opened in 1999, and has held a Michelin Star since 2008. It’s not too far from me as the crow flies, but yesterday, thanks to the current dire situation on our railway network, it took me four hours to get there, and almost as long to get back. Was it worth it? Absolutely.

I want to tell you all about what we ate, and what we drank – a host of fabulous wines to accompany the fine food. The problem is that I could quite easily fill an hour of your time. So instead, I’ll let you see some of the many photographs I took, and keep the words to a minimum. If you want to know which of the dishes I enjoyed the most, well, that simple signature dish of Slipsole in a seaweed butter sauce probably hit the greatest heights, its simplicity and perfection just triumphing over a mushroom and celeriac tart, which had the finest pastry you could imagine, and exploded with egg yolk when punctured.

The wine highlights were many, bearing the mark of wine obsessives rather than boasters. Tony’s Gaja Barbaresco 1999 was the most sublime of the reds (for me), and I apologise for suggesting that my own As Sortes Godello 2011 topped the whites. Only one wine didn’t live up to expectations – The Breton Bourgueil. It was a bit corked, we thought. The beer, the Champagne and the very unusual South African Chenin were consumed on the train down from St Pancras, the rest at The Sportsman. I hope the pictures give a sense of the truly delicious food and wine.

The one thing to remember when looking at the food here, is that Stephen Harris aims to compile a menu entirely from food he can see from the pub. The lamb grazes on the salt marsh over the road, the vegetables are grown in the garden, the sea plants are foraged and, whilst he can’t literally see the fish and seafood, it is very local and very fresh. Even the butter is home churned. A true locavore destination. 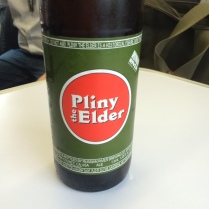 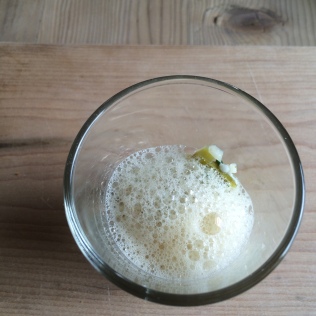 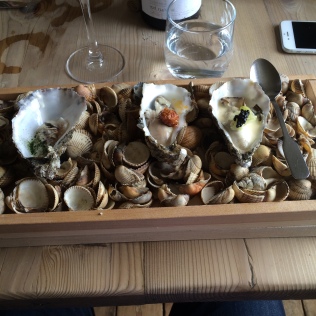 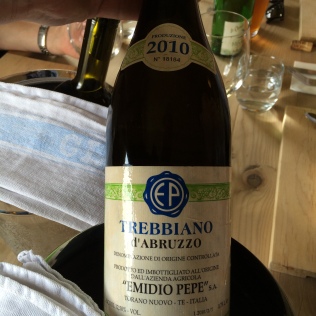 Brill tartare with soya yoghurt and the first course proper, Oysters, with a fabulous Raveneau Butteaux 1er Cru Chablis and the first of our Emidio Pepe wines, the Trebbiano d’Abruzzo.

As Sortes 2011, Val do Bibei Godello from Valdeorras by Rafael Palacio and unbelievably complex, low acid Hermitage Blanc Chevalier de Sterimberg 1983, Jaboulet, with cream of vegetable soup, and the mushroom and celeriac tart. See how simply the dishes are named here.

The Slipsole grilled in Seaweed Butter gets a big photo, it’s a kind of signature dish at The Sportsman and it’s hard to convey just how good it is. Subtle, fresh, probably perfect… 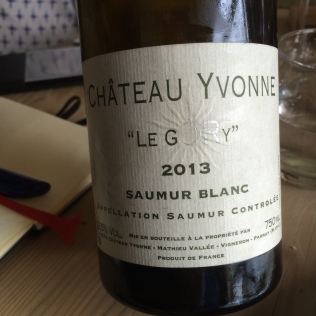 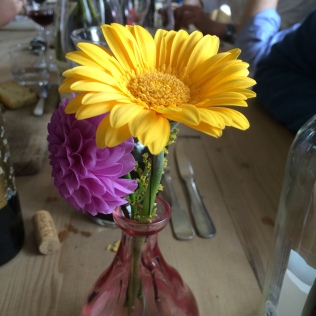 The Brill here is braised in Vin Jaune and topped with a piece of smoked pork. The Saumur Blanc, Ch Yvonne “Le Gory” was new to me, OW Loeb having just imported it. Very good indeed, recommended.

Two contrasting Morgons – the delicious and lifted “Bio Dynamite” from Yann Bertrand and Grange Cochard‘s more sturdy, structured, Cote du Py 2009. The Emidio Pepe Montepulciano d’Abruzzo 1982 took time to open despite its age, but did, slowly, whilst showing a touch of farmyard brett (which didn’t worry me). The Fonsalette Cotes du Rhone 1999 began wonderfully, but perhaps faded a little by the end (deliciously, though). It was red of the day for some people. 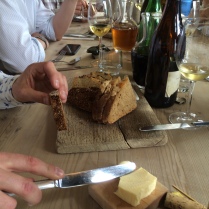 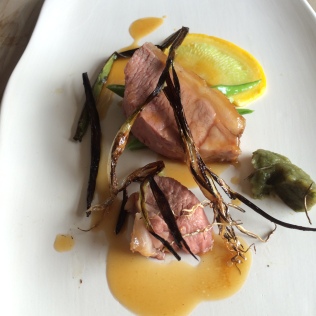 You can see from the glass on the right that the Gaja is still youthful, but what a bouquet! Unbelievable. At least one person found it too modern but I thought it very fine, assured, silky over its tannins. The bread at The Sportsman (top right) is out of this world, for me perhaps even better than Hedone’s in Chiswick (it’s a close run thing). The treacly sourdough is something I’d love to make myself, whilst I have genuinely never eaten a finer focaccia, not even in Italy. The lamb, above, is roast saddle. 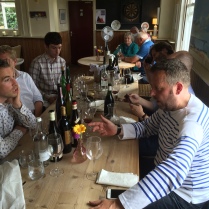 Chateau Batailley 2001 was drinking very well, the 12.5% alcohol making this savoury red a great lunchtime wine without that being mere faint praise. Classic Pauillac. I was admiring the causse-forged cutlery, a sound touch. 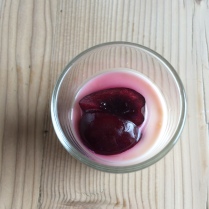 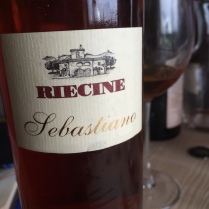 Top right is an ethereal concoction which they call jasmine tea junket with (Kentish) cherries. Dessert proper was a piping hot rhubarb soufflé with rhubarb ripple ice cream. The fascinating, and brilliant, Cinque Terre dessert wine, Sciacchetra Riserva 1997 from Monterosso al Mare was both complex and wild. A wine I’d like to seek out but know nothing about, not even the producer, Terre di Levante. It’s made from raisined grapes, the thick skinned Bosco, with Vermentino and Albarola. It has a luminous amber colour, and smells of so many things it would create a pretentious list of adjectives you would not welcome. John from Winemakers Club brought it and I’m hoping he’ll do the legwork and maybe even import some. It was so good it even had the edge over the Riecine Sebastiano, a Tuscan natural passito IGT made intermittently by this fabulous Chianti estate. This vintage is the 1999.

So, a perfect day. Left home at 7.40am, opened the door at 8.45pm, a tiring day for sure, involving four trains, two taxis and one Underground journey. I’m very glad I wasn’t too inebriated! It was a truly memorable day out, one which I count my blessings for being able to enjoy. I think there’s now already a plan for something even more ambitious later in the year. Before our taxis back to Whitstable station arrived we had the chance for a nice post-prandial stroll along the estuary, with views over to the Isle of Sheppey, and I’ll leave you with a few photos. It’s worth leaving some time for this.

The Tasting Menu at The Sportsman costs £65 per person (it does change, and what we ate differed from that on the web site). The staff are happy to take account of allergies and preferences if given warning. The availability to take our own wine was down to an arrangement made by one of our party, who is a regular customer. I believe something on a much smaller scale can be arranged in advance. To get to The Sportsman you need to take a taxi from Whitstable station (£8.50 each way). The tasting menu commences at 12.00 prompt. Allow three-and-a-half to four hours to eat it. 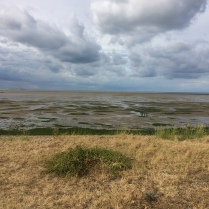 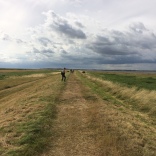 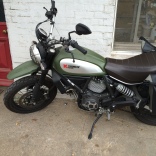 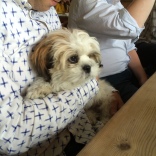 The little man is Galahad, four months old and very well behaved. I think he enjoyed the day as much as the rest of us.

3 Responses to A Sporting Chance