It may be a coincidence, but so many people I know who love wine also love cycling. Of course, wine is a highly calorific beverage and we all need to battle those calories. But there’s another angle as well. I remember last time I visited the Cote d’Or, driving down the Route des Vins between producers, stuck in a stream of traffic, boots full of wine. Whilst you really can’t beat walking in the vineyards to get to know your terroir, a bicycle is a relaxing alternative to the car: you get to cover a wider area than on foot, with the chance to stop and look whenever you want.

Almost every time I visit a wine region I try to get on a bike at least once during the trip. The good news is that many wine regions now have dedicated cycle routes, often well away from the traffic which can clog the roads in summer. Such routes are usually well marked and well mapped, and if you don’t want to lug your bike across Europe (or are flying), there are almost always cycle hire facilities on hand. In recent years I’ve cycled on the paths of the Mosel in Germany, the Neusiedlersee and the Danube in Austria, and the Loire in Touraine, France. These are not the only options for wine biking by a long way, but for sheer cycling pleasure, stunning wine country, not to mention all important pit stops for tasting and eating, they are a good place to begin.

As the Danube flows majestically towards Vienna it passes through the Wachau region. It’s the Austrian vineyard which is closest in feel to Germany’s Mosel, steep vineyards rising above the river to hills topped with ruined castles, whilst pretty villages below huddle around the tall spire of an old church. It’s a region where, like the Mosel, Riesling also excels, along with the native Grüner Veltliner.

We took an early train from Vienna’s Franz Joseph station up the line to Krems, having pre-booked bike hire online, a ten minute walk from our destination (but Krems is full of bike hire options). Even before you leave Krems itself you are almost immediately onto a dedicated cycle track, but when you leave the old suburb of Stein on the town’s western edge, you are truly off-piste as far as traffic is concerned. Some of the Wachau cycle route is on vineyard roads, and it reverts to public roads through the village centres, but it is generally very safe and traffic free, apart from the odd vineyard tractor.

It’s possible to cycle a long way on the Danube trail, as far as Germany if you’re game. Or maybe take a day to reach Melk at a leisurely pace, stay over night, and explore the abbey. We went for a lighter, one day, option – cycling to Spitz where we had a leisurely lunch in the sunshine at Haus Prankl (just west of the village itself),  followed by a wake-up walk to the castle above the village. Here you get a bird’s eye view of the sweep of the river and the vineyards.

On our way to Spitz we passed through villages which will be as familiar to lovers of Wachau wines as those of Burgundy and the Mosel: Unterloiben and Oberloiben, Durnstein, Weissenkirchen and Wosendorf. Durnstein is particularly attractive, though equally popular, sitting above the river, towered over by another castle ruin. This one served as the prison of Richard I of England when he was captured on his way home from the Third Crusade, having offended Duke Leopold of Austria after the siege of Acre.

Spitz is a great destination for another reason, though you will need some panniers or a bike with a basket. Although the wine route is scattered with the famous producers of the region, from the traditional winery and very good heuriger of the Knoll family (the Loibnerhof restaurant in Unterloiben is another great food destination) to FX Pichler’s ultra-modern winery just off the cycle route near Oberloiben, you do need to make an appointment to taste. But if you want an in-depth survey of the Wachau’s wines, Vinothek Hubert Fohringer (down near the ferry jetty in Spitz) is one of the very best wine shops in the region. A visit here is highly recommended.

The Austrian Tourist Board will send you a very good Wachau Trail Map at a scale of 1:35,000 – indispensable. 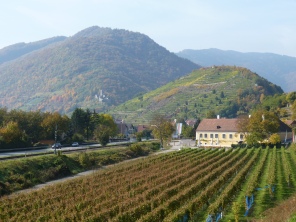 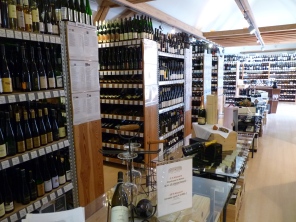 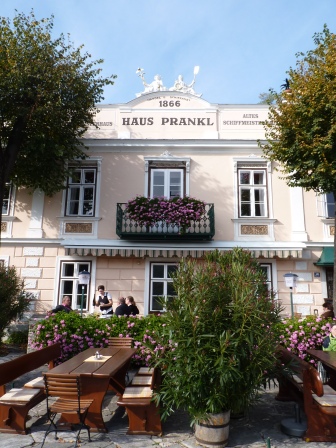 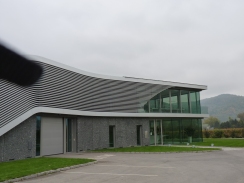 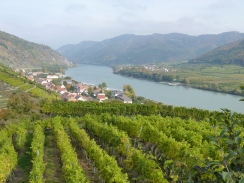 France’s longest river has unending cycle touring possibilities along almost its whole length, but Touraine provides some of the most picturesque (and easy) biking, and the medieval town of Chinon is a good place to start. Whilst aficionados of Chinon’s wines might wish to head east, towards Panzoult, the prettiest cycling is in a westward direction.

Just south of Chinon, beside the bridge over the River Vienne, there’s a cycle hire depot. If you cycle west for a short distance, along the right bank as far as the busy D751, and cross to the north side, via the bridge, the cycle route mixes (as in the Wachau) dedicated, traffic free, cycling paths with small village roads which are very quiet. The off-road route begins immediately after that bridge, on your left, following the river’s right bank. After a detour through a couple of villages, the off-road route recommences between Savigny-en-Véron/Port-Guyot and Candes-St-Martin/Montsoreau, where the Vienne flows into the Loire. From here I recommend a detour south, to the Abbey of Fontevraud. There’s some nice hilly countryside and forest around here, and all of these villages have numerous places to grab lunch with a bottle of local wine.

Mind you, on the subject of drinking and cycling, I did learn a lesson here a few years ago. It’s all very well sitting in the sunshine over lunch enjoying a glass, or maybe two. But it is possible to be caught drunk in charge of a bicycle, and even if you keep within limits its still the same as drinking when you are driving a car. However sober you might be, the dehydrating effects of alcohol and a large lunch on one’s peddle power shouldn’t be underestimated. I remember cracking on a rise towards Fontevraud which could, in all honesty, only be described as a gentle incline, hardly a minor alp. I almost had to get off and push. 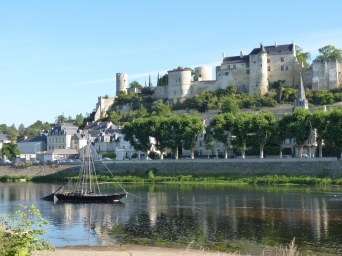 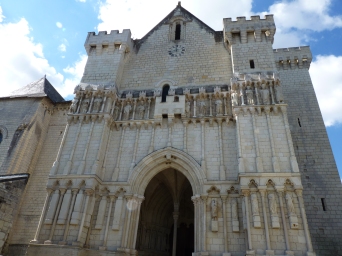 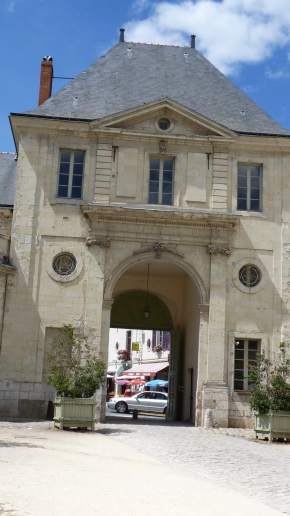 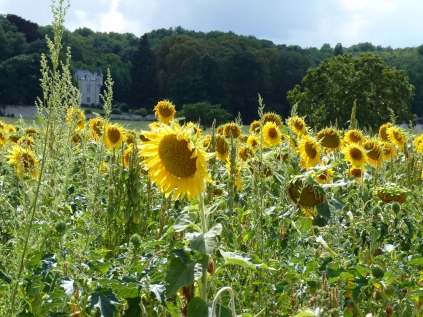 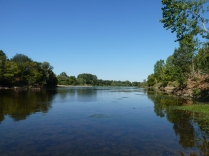 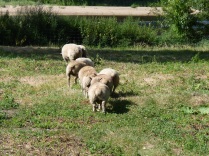 Regular readers will know how much I love this lake, about an hour’s bus ride from Vienna. The whole region is very well endowed with wine producers, and you can’t visit Rust without hiring one of the small motor boats for a morning out on the lake and among the reed beds. But the lake is also blessed with a passenger ferry service which allows you to take your bike over, thus opening up a lot more possibilities for a day in the saddle. Once again, if you don’t have your own cycle, don’t worry. Fahrrad Johann Schneeberger on Rust’s Rathausplatz, just a few doors up from Heidi Schroeck, is your man.

You can take a ferry from the marina at Rust, over to Podersdorf, but last summer we preferred to cycle the five-or-so kilometres between the vines and the lake to Morbisch-am-See (keep your eyes open for the adorable Mangalitsa pigs if you take this route), for the ferry to Illmitz. Illmitz is another four kilometres from the ferry jetty, but this eastern side of the lake contains an extensive bird sanctuary. I’m not especially knowledgeable on this subject, but we spent an hour or two cycling the lanes here, stopping at several hides to watch the waders. There are a number of circular routes from Illmitz itself, which is a good place to stop for lunch or a coffee, the village being home to several internationally renowned producers (Kracher and the Tschidas for starters).

If you have the energy, once you have returned on the ferry, head south out of Morbisch and before you know it you are into Hungary. The very intrepid (and fit) cyclist could actually ride right around the south side of the lake here, but from Illmitz to Morbisch on the “Iron Curtain Trail” is something approaching 50 kilometers (I know a good few fellow wine lovers who would zip that off in an afternoon, but my joints are beginning to creak a little for that level of exertion). Anyway, the ferry across the lake is fun, and sitting on deck with a restorative coffee is a pleasure in itself.

Pick up the Raderlebnis Neusiedlersee map, which includes all the cycle routes, from the Tourist Office in Rust. 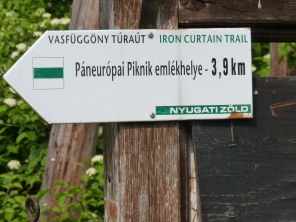 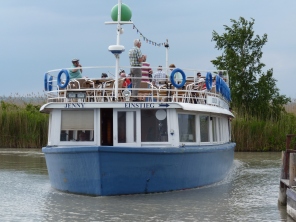 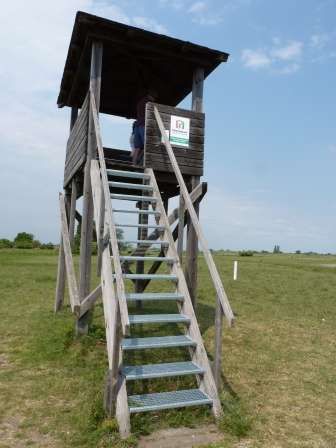 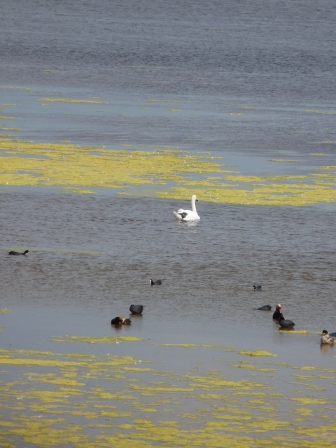 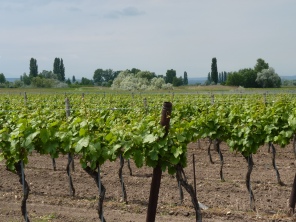 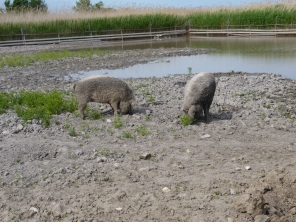 Last summer we also added the Mosel cycle path to our list of favourites. We were staying just outside of Bernkastel and it’s suburb on the other side of the river, Kues. Once again, there are several bike hire options, and the Tourist Office will have a list. There are two choices of direction from Bernkastel, both providing unrivaled views of the vertiginous vineyard slopes which make this river one of the most beautiful destinations for wine lovers in the world. You can go southwest, towards Piesport, perhaps via Thomas Haag’s brooding pile, Schloss Lieser, or do as we did and cycle northeast, to Traben-Trarbach. Keeping to the Mosel’s eastern bank, nearly all of the route to Trarbach is off-road.

Almost immediately upon leaving Bernkastel, in the shadow of the Doktorberg, you are flanked by the steep vineyards of Graach and Zeltingen, split by the vineyards opposite Wehlen, where a stop in front of the famous Sonnenuhr (sun dial) vineyard is de rigeur. As well as being quiet, the track sticks close to the river here. There are plenty of other kinds of watering holes too. The capacity of the German cyclist for a mid-morning beer is impressive.

As you sweep round the river’s meander towards Erden the vineyards switch to the south-facing western bank, as Urzig’s “spice garden” comes into view, a reminder of how difficult, and dangerous, working these vines is for the dedicated men and women who farm these slippery, slate slopes.

It’s here that you will pass beneath the river’s great blot on the landscape, the contruction site of the mindless Mosel Bridge, intended to open up Frankfurt-Hahn airport. Regional transport policy, and party-politics, obviously take precedence over a World Heritage vineyard in the minds of Germany’s politicians. Yet despite the bridge, the river here is incontestably beautiful beyond words. You ride on through Losnich, following yet another sharp bend in the river, until you eventually reach Trarbach (with its Buddhist Museum), and cross the old fortified bridge into Traben on the opposite bank.

You can cycle onwards if you so wish. Eventually you’ll get to the Rhine at Koblenz. We took the option of lunch in a small restaurant down near the river by Traben, before returning to Bernkastel on the other side of the Mosel. The cycle route on the western bank is not quite as attractive, nor traffic free, as the other side of the river, but, with a few detours into the vines and a bit of sniffing out a route, it does afford another perspective on the river. The last part of the route back into Bernkastel, via Kues, is very gentle and quiet.

Although you can get a free cycling map of the Mosel from all the local Tourist Offices, I’d try to get hold of the green Geomap 1:50,000 Moseltal map (number 44105, Vulkaneifel-Moseleifel in the Wander-und Freizeitkarte Series, Schweich bis Winningen). The added detail is worth it. 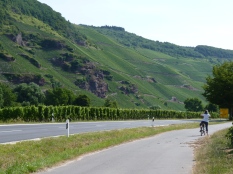 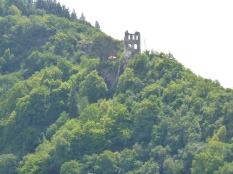 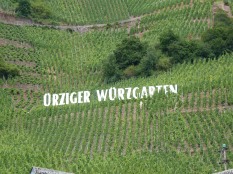 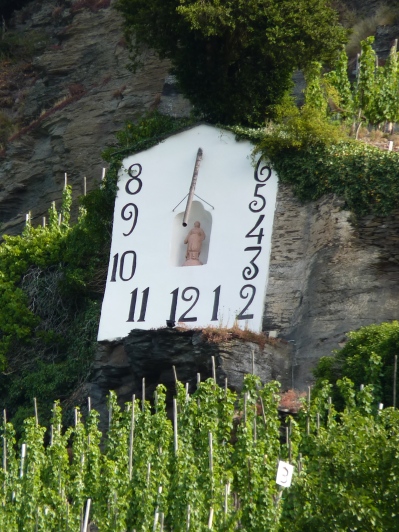 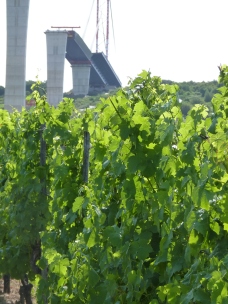 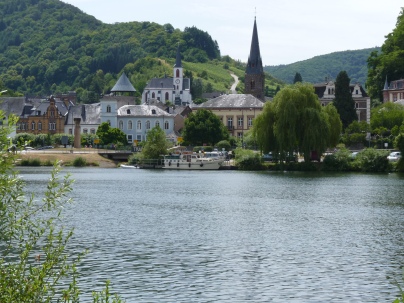