When 28-50 was simply one exciting new restaurant for wine lovers, albeit in a dark basement off Fleet Street, I used to dine there fairly regularly, lunch and dinner. But after the Marylebone branch opened I kind of gravitated there, and it became my favourite branch of the emerging chain. Having a good relationship with the team, it became the venue for many wine dinners, corkage having been duly agreed. For a number of reasons I don’t think I’d dined there for about a year, so it was very pleasurable going back on Tuesday evening for dinner with some good friends, most of whom I’d also not seen for a good while. One of them was bound to bring some fine, no, very fine, Rioja, so lips were being licked well before kickoff.

The food at 28-50 doesn’t make any claims to grandeur. It’s fairly simple fare, plated up without pretense, but that’s the beauty of using them for a wine dinner, whether you are buying from their excellent connoisseur’s list of usually older wines, supplied by friends of the chain, and sold at reasonable markups, or whether you are taking your own kit, as in our case. The food doesn’t fight with the wine, it complements it. So apologies if I don’t eulogize over the terrine, steaks and dessert and move on to the wines. We were, as ever, grateful for the welcome, and especially for the excellent wine service.

A good Champagne is obviously welcome to set off proceedings (well, the two early birds were thirsty and ordered a glass of La Guita Manzanilla, but that doesn’t count as one of our seven a day). After Saturday’s Clouet Cuvée 1911, I have been seriously spoilt because Diebolt-Vallois Fleur de Passion is another Champagne I love, but rarely drink (and I think I’ve only ever bought one bottle myself, I hardly ever see it). This was the 2006, which was fresh and clean. It’s classic Cramant Chardonnay, but with (as every book says) a light touch. Nothing too “strict”, despite it being a non-malo cuvée which is vinified in (old) oak, from a village whose wines can often err towards the far reaches of chalky minerality and precision.

Instead of moving on to a white, we took the first red because on decanting its owner was worried it might fade. It didn’t fade, though nor did the charcuterie plate we ordered to go with it turn up (no matter). We were trying the wines blind. This was so obviously Rioja, but in playing the blind tasting game properly, someone must suggest something different (it’s a rule). That’s why I said Pomerol. Well, it was just so silky and rich. It turned out to be CVNE Vina Real Reserva Especial 1952, a magnificent wine.

There’s always a moment when you realise the wine you brought is going to have to follow something like that. It doesn’t help when the vintage you thought you had (2009) turns out to be something else. And then, in a blind tasting, you find yourself sat right next to a man who buys from this producer every year. Oh well! Roulot Meursault 2011 was not up to the standard of some of the other wines of the evening, and the 2009 (lost somewhere, hopefully to turn up one day) would have been better. But I’m a massive Roulot fan. I love this style of Meursault, at the opposite end of the field to the fat and buttery school of winemaking. I did enjoy drinking it, a lot if I’m honest, though I wondered whether others were being polite. 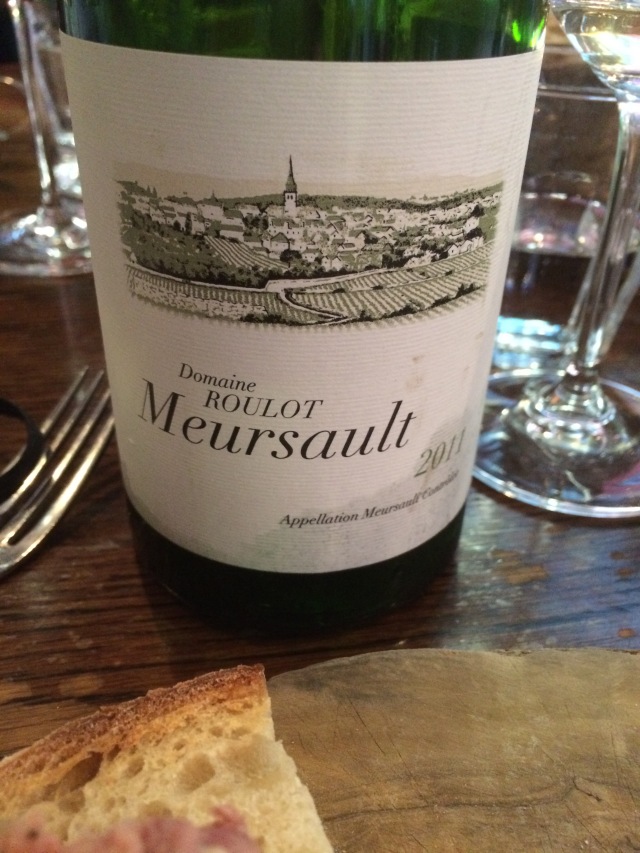 The next wine looked magnificent just sitting in the glass. Even by sight one might have ventured a very classy claret. Sadly one sniff, and it was clearly corked to you-know-what-ery! Chateau Léoville-Barton 1999. It would have been stunning, just not tonight! 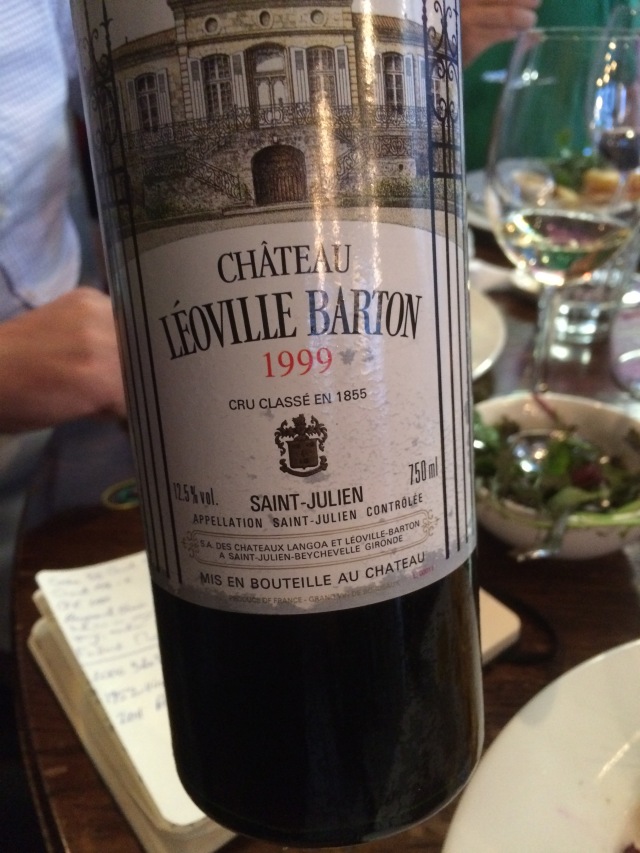 The next red is very different. We managed to narrow this down to Northern Rhone. My guess was Seyssuel, but I was too far north. Hervé Souhaut Saint-Joseph 2010 is a fantastic young wine. In the “natural” camp, the fruit is truly alive, freshness no doubt enhanced by just 12.5% alcohol. But the depth of this wine is likely to have something to do with the age of the vines – 80 to 100 years old. I’ve only had Souhaut once or twice before, but every time I feel a desire to look out for a bottle or two. 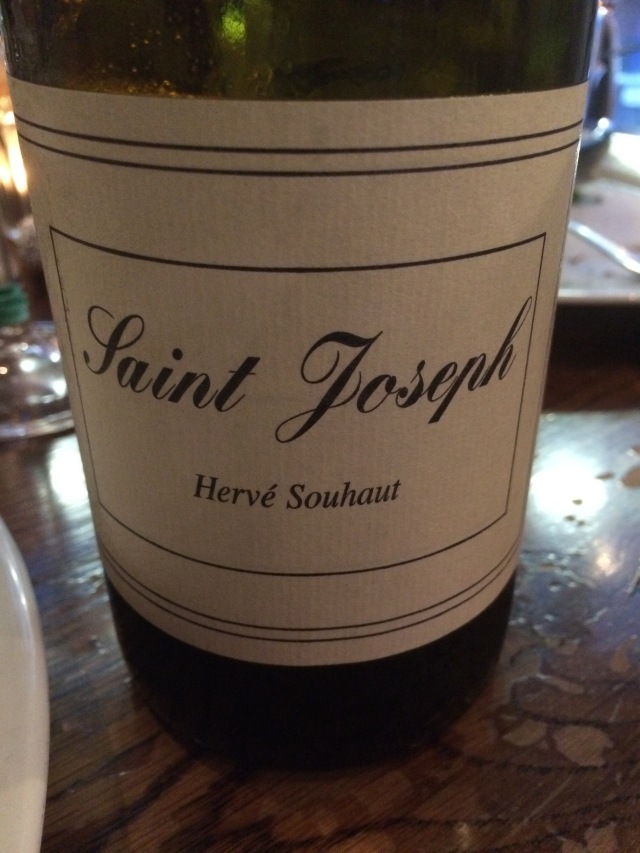 After the corked Léoville-Barton it’s always good to have a man with another bottle in his bag, and when the wine was identified exactly, producer and vintage, on a couple of sips by the man on the left, below, (the man on the right was the generous provider, of course), I was glad I hadn’t proposed the Meinklang Graupert Zweigelt which was lurking in mine (a magnificent wine, of course, but not matching yet another wine over 60 years old). It was, of course, CVNE Vina Real Reserva Especial 1954. Such richness was unexpected. But here’s what the man who brought it along had to say in print: “This vintage [1954] qualified as merely good  [official designation]…But time has proved CVNE’s Vina Real Reserva Especial…[one] of the best Riojas ever”. Imperial may be the flagship wine at CVNE, but Vina Real has a great reputation for ageing, and for a certain richness, and this was no exception. I was actually in heaven here. What indeed must the 1947 Imperial taste like?! 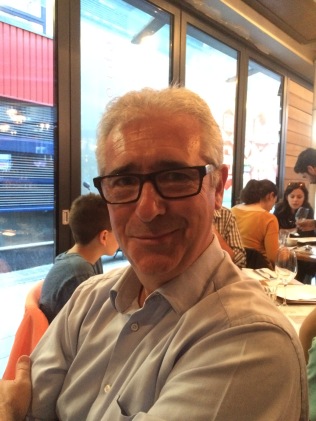 The argument between us was which was the better CVNE wine (1952 or 1954). It left a split in the ranks, I myself going with the 1954 initially, yet oddly it is that first taste of the 1952 from decanter that has remained with me as I type. Unlike the 1954, whose greatness has been acknowledged, 1952, both at CVNE and in Rioja generally, does not appear to gain such high praise in print, so far as I can see. Yet both bottles were superb, and ageless. It’s easy to think wine lovers can get complacent when drinking wonderful bottles almost weekly, but it’s just not true. When you drink wines like these CVNEs, made before any of us were born, you do really stop and savour the moment.

We finished the evening with a wine generously ordered off the list by the man whose red was corked. We didn’t have to guess the wine, and I think someone probably managed to guess the vintage, although by this stage we were all quite relaxed and amiable. Chateau Coutet 2003 is rich, but not as rich as the vintage in wider Bordeaux might suggest. Very balanced, with orange dominating the colour, and apricot the nose (or is it peach, nectarine, you know what I mean). There was little sense of botrytis, though a nice bit of honey. A very tasty Sauternes, or should I say, Barsac.

Writing here and elsewhere mainly about the outer reaches of the wine universe and the availability of wonderful, characterful, wines from all over the globe. Very wide interests but a soft spot for Jura, Austria and Champagne, with a general preference for low intervention in vineyard and winery. Other passions include music (equally wide tastes) and travel. Co-organiser of the Oddities wine lunches.
View all posts by dccrossley →
This entry was posted in Dining, Fine Wine, Wine and tagged 28-50, Chateau Coutet 2003, CVNE Vina Real 1952, CVNE Vina Real 1954, Diebolt-Vallois, Fleur de Passion 2006, Hervé Souhaut Saint-Joseph, Léoville-Barton 1999, Rioja, Roulot Meursault 2011, Spanish Wine. Bookmark the permalink.