Working Up a Genuine Thirst

We recently had some extensive building work done and, in order to save some money for a lot of new carpets, we decided to do all the decorating ourselves. I know, so much less exciting than hitting the South of France for summer. But after days spent up a ladder, or rolling a roller on a long pole, at least there was a nice bottle to look forward to. Come next week, when the carpet fitters have done their fitting, life can return to normal – wine tastings, lunches (including a trip to “The Sportsman” which I’m very much looking forward to), and vineyard visits. All the everyday stuff. But at the end of the decorating day, paint-spattered and muscles aching, the following half dozen wines stood out from the past couple of weeks, providing thirst quenching enjoyment before stumbling into bed.

La Bota de Florpower 57, Equipo Navazos [2012] (12.5%). I never tire of Florpower, and every bottling is fascinatingly different. This is the most recent bottling I have, although the subsequent edition is heading over to the UK right now (I under ordered dramatically, thinking I had plenty of this one – bad move). It’s a simple proposition. Make a Palomino table wine from the same soils as Fino Sherry, ferment in steel with natural yeasts, allow for a flor reaction, but bottle unfortified. It’s dark yellow and smells like a fino, but it’s light on the palate, balancing citrus and what can be described in no other way (with apologies to the naysayers) as a chalky, soft, mineral mouth texture. It doesn’t lack for fresh acidity and it’s in a great place now, just bursting to be glugged. 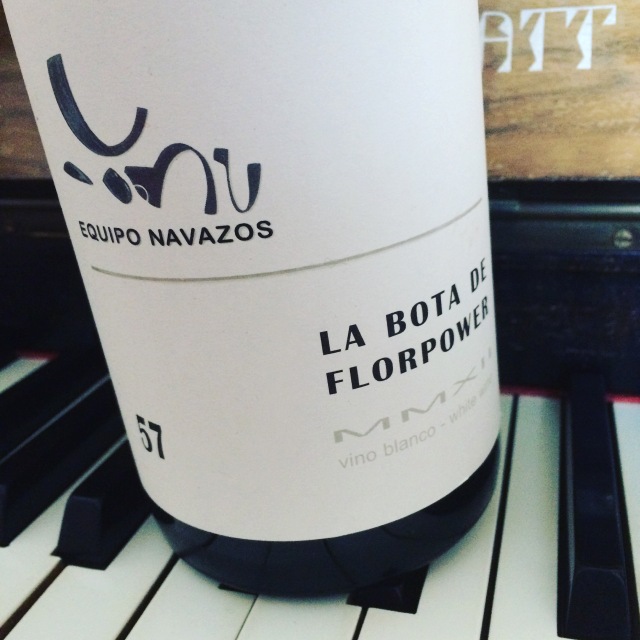 Chianti Classico Fonterutoli 2011 (13.5%). Some might wonder whether a wine at 13.5% alcohol can be a thirst quencher? Wait and see the last wine! Actually, this appears to be a lighter vintage at Fonterutoli, or at least the 2011 is a wine of elegance. I particularly liked this because one thing you can always rely on this estate to produce is a wine which really smells and tastes like Chianti. It’s mainly Sangiovese, and it does have that classic brick red tinge which you don’t get when you completely overdo the Merlot. They do put it in small oak for twelve months, but you can hardly tell.

As I was reminded by a friend on Twitter, Fonterutoli is located in a lovely village, just a few kilometers south of Castellina and very close to Vagliale, where I’ve stayed before.The Mazzei family, who run the estate today, have been in charge since the 15th Century and it’s one of those quintessential Tuscan family farms. The winery is very modern, all gravity fed, built into the hillside and providing for small batch fermentations, yet it blends in seamlessly without being in the slightest bit obtrusive. That seems to be mirrored in this entry level Classico, and that’s what I love about it.

Vivid Gamay fruit here, a natural wine giving pure refreshment without the need for anything more. There’s a note on the label to keep this below 14 degrees. I very much doubt that was achieved in retail, and I’m sure that the ambient cellar temperature here at the moment is above 14 degrees as well, but there is no sign of spoilage. Nor was there with the previous bottle. But these warnings on low sulphur, or sulphur free, wines always interest me. I really do doubt the ability of most retailers to abide by them.

I was actually prodded into drinking this by someone asking me about Antoine Sunier. Antoine’s Regnié had been voted wine of the night at one of the three Beaujolais dinners we had last summer. I’m right out of Antoine’s wines, although it looks like UK distribution might not be too far away. But I do thankfully have just a little more of Julien’s. 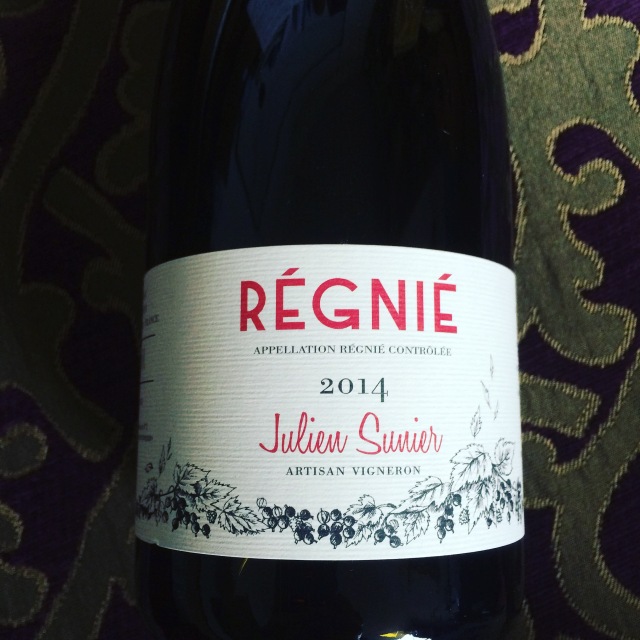 Santorini Assyrtiko 2013, Hatzidakis (13.5%). I wish I drank more Greek wine (I used to), and I wish I drank more Assyrtiko too. It’s a grape which excels on Santorini, and can also benefit from a little bottle age (like Albarino, and Verdicchio, two other grape varieties which mostly get knocked back too soon). This is a pale wine which doesn’t look either alcoholic, nor complex. The nose is a little muted at first as well. But take a sip and you get a nice touch of citrus zest on the end of the tongue, and a chalky dryness further back. The acidity refreshes, but the dryness leads your senses on to just enough complexity and a certain richness, to make it a food wine.

If you want an analogy which is probably way out but sounds nice, think Chablis from a volcanic island. At least the second bit’s accurate. In fact, this relatively inexpensive bottle (the 2015 is currently £12.99 at UK supermarket, Waitrose) is possibly the best of the bunch for outdoor dining under the parasol, as the mercury heads towards 30 degrees Celsius here on the South Coast. 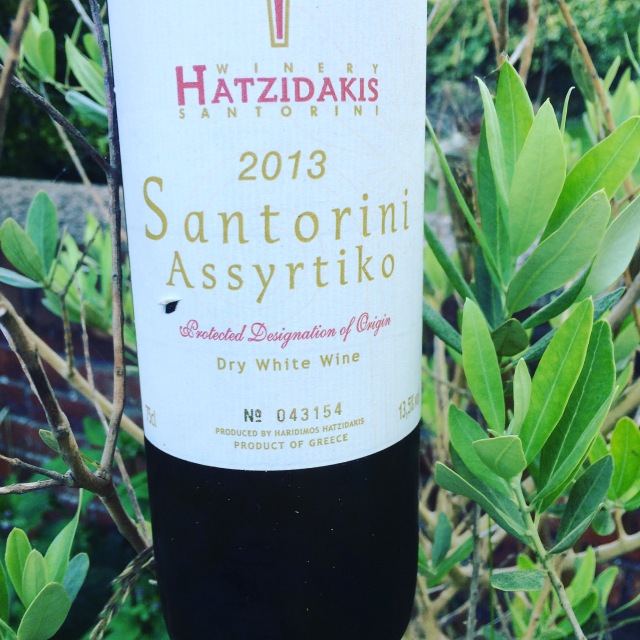 Piquentum Blanc 2012, Buzet d.o.o., Istria, Croatia (12.2%). This is a lovely Malvasia (or Malvazija in Croatian) given three days skin contact by French-born (Jurançon) winemaker Dimitri Brecevic. It sees a mix of wood and stainless steel and is intended to be aged (I’ve kept it about one year). This is another wine which combines freshness and complexity. The nose is really hard to describe, being both floral and spicy (mild spices). There’s a tiny bit of texture, perhaps the short skin contact, reflected in the mid-yellow colour, and the wine doesn’t lack for weight, despite the very specific but relatively low level of alcohol.

Dimitri has his vines near the town of Buzet. No, not that one! This Buzet is not far from the Slovenian border in Croatia’s Istrian wine zone. He makes natural wines with minimum intervention in a winery hewn into the hillside, providing uniform coolness (around 11 degrees) in which the wines mature. The region may be a rural idyll, but Dimitri is no stay-at-home. He’s made wine in Spain, Australia and New Zealand, along with a final stint in Burgundy, before finding his home in Istria.

I admit, I don’t get to drink a lot of Croatian wine, it must be said. That’s why, without making this out to be something it isn’t, I was really taken aback. It really is very good. I bought this from an interesting small merchant which specialises in the food and wines of the Adriatic region, Pacta Connect. 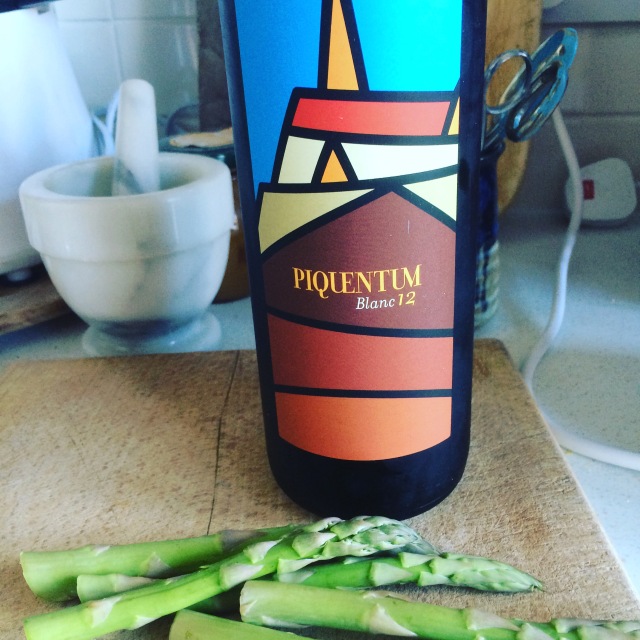 Nussberg Alte Reben 2012, Wiener Gemischter Satz, Wieninger (14.5%). This wine probably can’t claim to be the most thirst quenching of the half dozen here, but I do love Gemischter Satz. Actually, many versions of this Viennese field blend are the height of thirst quenchability, but with this cuvée, one of Fritz Wieninger’s top bottlings, for your £20+ you get vines over 50 years old, blending nine grape varieties (the main ones are Pinot Blanc, Neuberger and Welschriesling). It’s also one of the richest of Wieninger’s bottlings, a complex white with spice, brioche, citrus, mineral mouthfeel and more. Not a hotchpotch of flavours mirroring the multitude of varieties in the field blend, but more a wine of genuine personality reflecting both the terroir of the slopes surrounding the city and the traditional winemaking of this relatively new DAC, but centuries old vineyard.

Wieninger has perhaps the largest holding in Vienna, 70 hectares (including now the estate of Hajszan Neumann – he is only really challenged by the other great reviver of Gemischter Satz in Vienna, Mayer am Pfarrplatz). The Nussberg  vineyard rises around 360 metres above Nussdorf  on Vienna’s northern edge, on the western side of the Danube. Wieninger is actually based on the other side of the river at Stammersdorf, where the other great vineyard for Wiener Gemischter Satz lies – Bisamberg. Nussberg faces south and southeast, largely on limestone. In the near distance is the enormous edifice of the great abbey of Klosterneuberg, and all the villages boast the famous Heurigen where you can turn up and enjoy the owner’s wines along with some simple food (so long as you don’t choose one frequented by the coach parties where the wines are  probably made with less discerning palates in mind). Beautiful place, and surprisingly beautiful wines. Quite unique and well worth exploring.

Oh, and when it’s thirsty work, there has to be beer as well. Beavertown Neck Oil, does what it says on the tin! Pale Ale, but don’t expect it to be filtered to death to extract all flavour. It’s not. Neither is it quite what you might expect from an industrial estate in North London. 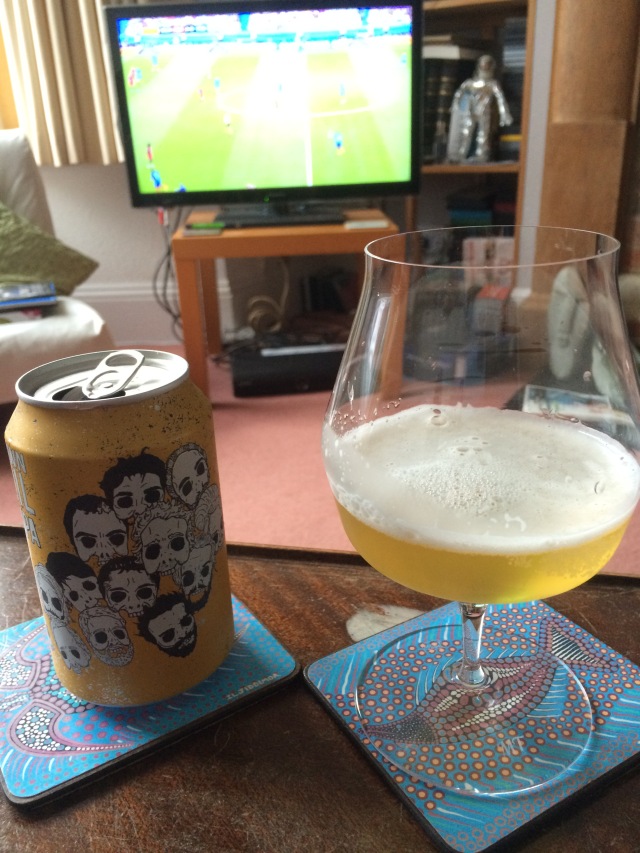 Writing here and elsewhere mainly about the outer reaches of the wine universe and the availability of wonderful, characterful, wines from all over the globe. Very wide interests but a soft spot for Jura, Austria and Champagne, with a general preference for low intervention in vineyard and winery. Other passions include music (equally wide tastes) and travel. Co-organiser of the Oddities wine lunches.
View all posts by dccrossley →
This entry was posted in Wine Agencies. Bookmark the permalink.