How the Other Half Leflaives

If one only drank the kind of wines which I do much of the time, the ones most normal people think a bit odd, then I would be like those wine makers who only drink their own wines. The palate would be fooled into thinking that what I habitually drink is good, without a benchmark for comparison. I like to flatter myself that when I promote “natural wines”, or wines from new or unusual wine regions, I do so having a sound knowledge of, and a good grounding in, more classic wines. In fact, what I choose to write about here often excludes the classic wines that we drink and the wine dinners and lunches I go to increasingly pursue the new. But occasionally an evening of fine wine debauchery comes along which merits a blog post.

It can sound awful writing about such evenings, where a whole raft of expensive wines are consumed one after the other. But such evenings are not every day affairs for most of the people present, and they are done in a spirit of generosity and the desire to share our treasures with others. I don’t think anyone ever loses sight of how lucky we are. But at the same time, things don’t always work to plan with the wines.

We began the evening, following delayed trains up to London on a dark and damp, if unusually mild, November night, with Dom Pérignon 2002. This vintage still seems very young, but there’s no doubting its class. Very fine but also quite full, if a little tight. I’d say hold onto this, but that’s not really news for those who own some, I think. There’s a touch of the beast about it now, but that will be tamed with more time in bottle. Always a privilege to drink it, of course.

The Dom was followed by a Jacquesson 2002, which might easily have been lost after the previous cuvée, yet being closer to readiness it presented a touch more maturity, whilst remaining finely chiselled. Not in the same league, though the freshness had a beautiful palate cleansing effect (a flavour which my detractors and friends alike point out that I am far too often tempted to describe as mineral intensity but which others have described as salty). Most critics suggest this will go to 2018, and that’s about where it would sit on my graph of evolution too.

We began our meal proper with Leflaive Puligny 1er Cru “Les Pucelles” 2000 from magnum. For anyone fearful of premature oxidation, no sign of pox at all. It did open a little tight (and cold), but grew in the glass, becoming much more expressive, so that I can recall its flavours now, as I type. On reflection this was probably my joint wine of the evening. With the difficulties presented by premature oxidation of white Burgundy, it is wonderful to be reminded just how magnificent and majestic these wines can be. Poise is a word which comes to mind, like someone perfectly dressed with a small flamboyant touch to show personality. Classic elegance, in other words.

If ever you are tempted to be jealous when you see people bragging about drinking a flight of icon wines, never forget that these wines do not always perform to expectations. The old cliché about there being no great wines, just great bottles, definitely applied with the four iconic Rhônes which followed.

The lineup began with Chave Hermitage 1982 in magnum. The last time I had this wine, admittedly from bottle, was a few years ago, when it was unforgettably a sensual bacon sandwich of maturity. Tonight it was not on top form, although hard to work out why. Not actually faulty, just a little dumb (though no TCA). When someone brings a wine like this, you hardly expect a backup, but a 1983 (bottle this time) was duly pulled out. This was better, but there was a touch of smelly sock where you usually expect that whiff of runny bacon fat. Would I have identified these as Chaves blind? I doubt it. But lest you think they went to waste, I for one drank mine, and was very grateful for the generosity of their provider. 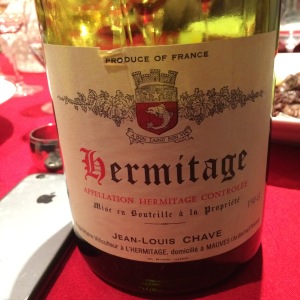 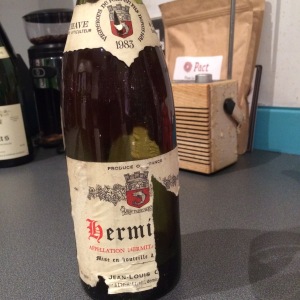 The next pair were younger vintages of Clape Cornas. The 1996 was, for me, the best of the four Rhônes on the day. It really developed in the glass, moving towards a supple sensuality that you look for in a mature wine from this region. The 1999 was a disappointment (I can say this as it was one of the wines I took), considering the vintage. It had a certain hardness to it, which showed the promise of further development you get with a young Cornas, but also, I think, a certain touch of rusticity. Of course, sometimes our tastebuds aren’t always on top form, but I didn’t hear massive praise or swoons of delight for any of these from around the table.

Moulin Touchais 1983 was, by way of contrast, everything one would expect from this well remembered old Chenin. Not as complex as the most concentrated wines of Anjou/Layon, but very dependable. Dark in colour, and mature, yet retaining freshness if not much acidity. The kind of wine where the sweetness balances on the tongue before spreading gently over the whole palate, encasing the mouth in a warmth of concentration. 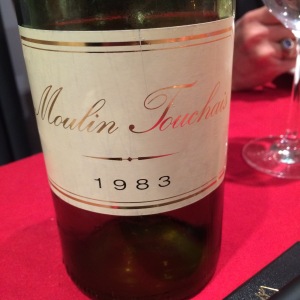 The last wine of the night, and it was very much night, not evening, by this stage, was without much doubt the most concentrated wine I’ve drunk all year. Equipo Navazos Amontillado Bota A.R. No 49 originates from Gaspar Florido, via Pedro Romero in Sanlúcar. The wines used for this bottling are between 55 and 80 years old, and it shows. It may only be a half bottle, but fortified to 22% and with such concentration, a little goes a long way. The perfume is like essential oil, and the length of the wine is truly extraordinary. These bottlings from Equipo Navazos may be rare, and perhaps expensive for Sherry, yet not expensive for a wine of such world class. This small bottler continues to highlight the forgotten riches which lie undisturbed in Jerez. This little half bottle outshone everything which preceded it, although wines of such intensity are for meditation, not carefree consumption.

So that’s how a far from average Saturday night goes for us. Blessed with food cooked with great care by perhaps the best amateur cook I know, and company to match, it made for a night of fascinating vinous exploration. But also as a reminder that even the most highly regarded wines don’t always quite live up to the extremely high expectations we place on them. 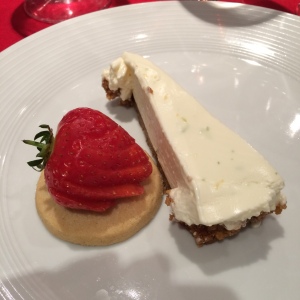 Wines of the night, the Leflaive and the Equipo Navazos for me, but I still thoroughly enjoyed them all.

Writing here and elsewhere mainly about the outer reaches of the wine universe and the availability of wonderful, characterful, wines from all over the globe. Very wide interests but a soft spot for Jura, Austria and Champagne, with a general preference for low intervention in vineyard and winery. Other passions include music (equally wide tastes) and travel. Co-organiser of the Oddities wine lunches.
View all posts by dccrossley →
This entry was posted in Fine Wine, Sherry, Wine, Wine and Food and tagged Chave, Clape, Dom Pérignon, Equipo Navazos, Jacquesson, Leflaive, Moulin Touchais. Bookmark the permalink.

1 Response to How the Other Half Leflaives