Reader Reminder – The World of Wine is Wide

At the Red Squirrel Event, which I wrote about recently, I spent quite a bit of time tasting in the same cramped spaces as Peter Richards MW. He’s quite distinctive, as a tall chap, easy to spot on the circuit, but I don’t know him and have never had reason to interrupt his concentration. But had I managed to read a paragraph from his pen in the current Decanter Magazine, I might have passed a comment.

The current edition celebrates the magazine’s 40th Anniversary, and I suppose it fits in that they asked forty key contributers (not me, alas) to name their wine of 2015 (so far). Peter Richards is Chair of the Decanter World Wine Awards Panel for Chile, and he chose a Chilean wine I certainly knew nothing about, Bodegas Re, Velado Single Vineyard Pinot Noir 2009, Casablanca.

The story of this wine bears repeating, and I hope Peter won’t mind me extracting this information from his entry in order to allow lovers of the unusual to hear about it. It is a wine, as he says, which “laughs in the face of terroir and other geekery”. The Bodega originally had a host of barrels earmarked for a pink wine. Then came the tragic 2010 earthquake, sending what one presumes was a stack of casks rolling around a shed somewhere. When they were finally recovered it was discovered that some had formed a layer of flor-like yeast.

Now the world has just rediscovered flor. Sherry is popular once more among wine “geeks” thanks to people like Equipo Navazos, and we are even reading about the flor’d-up Vin Jaunes from my beloved Jura in the National Press, heaven forbid. But is the world really ready for what Peter Liem and Jesús Barquin in their 2012 book on Sherry term Biologically Aged Pinot Noir?

Peter Richards called the wine unique, but to make it his wine of 2015 it must also have been exceptionally good. It was, because he says “Tasted blind alongside Montrachet, Morey-St-Denis and Haut-Brion, it stole the show. Mind-blowing”.

I don’t suppose I shall get to try this wine, although I see there should be some in the UK, albeit north of £50 for a bottle. But this is just one example of how the perception of what is fine wine has spread way beyond classic regions and styles. The forty writers selected for this article include a few who have chosen what I suppose one might call expensive trophy wines. A favourite writer of mine, known for his inquisitive and open wine mind, nevertheless selected a Rousseau Chambertin (though I thank him personally for reassuring me that Rousseau “did impressive triage in that year” – I don’t only drink weird wines and do have the odd Rousseau 2004).

But, looking through the forty wines, it is both refreshing and perhaps remarkable how many esteemed wine writers have chosen more unusual examples. It’s as if a once conservative profession is waking up to an almost hidden magnificence of (and I’m quoting examples taken from the Decanter piece) Zierfandler (Brook), Bierzo (Kemp), Teroldego (Guibert), Godello (Evans), Sylvaner (D’Agata), Picolit (Baudains), Kekfrankos (Gellie) and Cape Chenin (Rose)(to name but a few).

It may just be coincidence, but another DWWA Regional Chair for South America, Patricio Tapia (Argentina) also chose a fairly unusual wine, one of the single vineyard offerings (in this case from a 0.8 hectare plot of 90-year-old Listan Negro) from Suertes del Marqués. Now I’m pretty sure that most of the people who take time to read my Blog have possibly heard of this Tenerife producer, even if they’ve not tried one of their wines. But think about it. This year you could have read about Suertes in the Financial Times Magazine, in Decanter, or in a very good appreciation of the domaine by Tom Cannavan, either on his Winepages site or in this very issue of Decanter.

Just stop to think. Four or five years ago, would you have thought someone would list a wine from Tenerife as their wine of the year? Or one made from Listan Negro? My guess is that if you go back five or six years you would find hardly a single wine trade insider, merchant or writer, who had tasted this producer’s fabulous wines. I think that’s how fast the world of wine has changed.

Why? I think that wine from all around the world has improved quite dramatically over the past decade, building on the success of many of the well known New World producers who showed that you can make a living from quality wine outside the traditional, classic, wine regions. But an even bigger catalyst has been the market. As it has broadened and grown, there are just too many people chasing the icons. By icons, I don’t just mean the Latours and the Coches, but pretty much any producer from a classic region in France and Italy (for starters) who gets a good name.

The growth of the market has made the once supreme wine royalty and their heirs unnatainable luxuries for the ordinary wine lover, notwithstanding that the Bordelais have whole vintages lying almost unsold in Bordeaux. So it’s a damned good thing there’s a whole world out there for us to explore.

The analogy which comes to mind is the time when the powers of Western Europe woke up and discovered a New World full of riches, which they brought back to enrich their own lives and culture. Of course, these days we can pay for the vinous treasure we find without the pillage and plunder of those early explorers of South America, the Far East, India and the Caribbean. And many of those treasures are, as with Tenerife…or Bugey, Beaujolais, Friuli, Savoie, Granada and Catalunya, much closer to home. Yet all of a sudden there’s a “New Australia”, and a bunch of young winemakers finally transforming South Africa. And, poignant given my focus here on the comments of the two relevant Decanter Awards Regional Chairs for the Continent, a sudden rush of really interesting wines from Chile and Argentina which are neither soupy Syrah nor thick, alcoholic, Malbec – where did they all come from?

So, drink widely and, as the motto on the back of that Red Squirrel tasting list said, “don’t drink alike”. I like that. 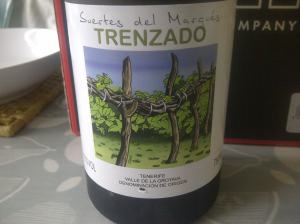 Writing here and elsewhere mainly about the outer reaches of the wine universe and the availability of wonderful, characterful, wines from all over the globe. Very wide interests but a soft spot for Jura, Austria and Champagne, with a general preference for low intervention in vineyard and winery. Other passions include music (equally wide tastes) and travel. Co-organiser of the Oddities wine lunches.
View all posts by dccrossley →
This entry was posted in Wine, Wine Hobby and tagged Bodegas Re, Decanter magazine, drinking widely, fine wine, Patricio Tapia, Peter Richards MW, South American Wine, Suertes del Marqués. Bookmark the permalink.

2 Responses to Reader Reminder – The World of Wine is Wide