We first visited Domaine André & Mireille Tissot in Montigny-lès-Arsures in the early 1990s. We were staying nearby and we found our way to their small tasting room down a hill behind the church, where we were entertained by a very friendly André and his wife, Mireille. Then in wandered a young man who they introduced as their son, Stéphane who, after completing his viticultural studies in Beaune, had returned to the domaine after stints abroad with Brown Brothers in Australia and in South Africa. 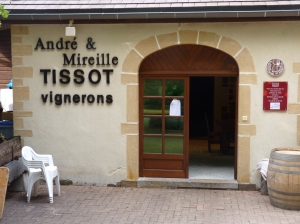 Offspring of winemakers habitually do a stage or two abroad nowadays, and you’ll find all sorts of people from California, South Australia and so on working a harvest in the Jura now. But back in the 1990s that was quite unusual, especially in this quiet region, somewhat cut off (or so commentators thought) from the “progress” being made in the major regions of France Viticole. Perhaps the closest we get to this is Jean-François Ganevat working as cellar master for Jean-Marc Morey on the Côte de Beaune. At that first meeting, there was certainly a glimpse of a searching intelligence and a forceful focus on quality that has made Stéphane one of the region’s star vignerons today. 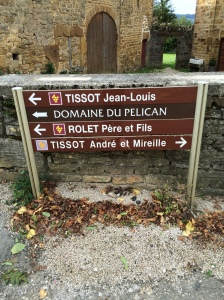 There are a lot of Tissots around Montigny and Arbois. Indeed, long before our subject made his name, Arbois boasted not one but two shops owned by Domaine Jacques Tissot, alongside those of Henri Maire and the large, quality conscious, family-run domaine, Rolet Père et Fils. Most are descended from Maurice Tissot, who started out in Montigny-les-Arsures in the late 1950s. All have done well, although Maurice’s youngest son left the region to found the best estate in Buzet, Domaine du Pech (now run by daughter Magali and partner Ludovic Bonelle, and which, because they have had problems with their AOC Panel – their wines are just too good for Buzet in my opinion – deserves our support).

Stéphane has been firmly in charge of the domaine since the 1990s, and works with his wife Bénédicte, although the domaine retains the name of his parents who, although retired can still be seen pottering around the village. The domaine has now grown, from the few hectares planted by André to 50 hectares. After making the domaine fully organic, with Ecocert Certification in 1999, Stéphane has embraced biodynamics (Demeter, 2005). It was all just part of his quest to experiment and to get the best out of his grapes and terroir. 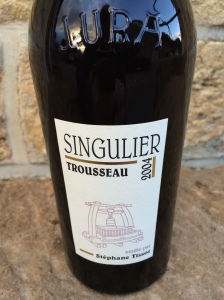 The first experiments with the market do not now seem so profound, but at the time the delineation of individual vineyard names for Jura wines in a somewhat Burgundian manner, were quite unusual in a region where even knowing the grape variety in any given bottle was often a case of serious detective work. Stéphane began in earnest with his Chardonnays and soon we were introduced to the different terroirs and locations of La Mailloche, Les Bruyères, en Barberon and then later, Sursis from near Chateau-Chalon.

As the range expanded we saw another style of wine which pretty much started here – what I can only clumsily call “Not Vin de Paille”. Vin de Paille, the long-famous straw wine of the Jura made from dried grapes requires (inter alia) 14% alcohol, don’t ask me why! Many producers wish to make a lighter dessert wine with dried grapes. The wine which contributed most to Stéphane’s fame in those early years was “PMG” (an acronym which roughly translates as “for my gob”, presumably as opposed to the “gobs” of those in authority). It’s made from partially fermented grapes with around 400m/g of residual sugar. That the domaine can charge €68 currently for a half-bottle is testament to it’s success.

But for half that price we can (thankfully) buy “Spirale” (white grapes) and “Audace” (from red Poulsard grapes), made in broadly similar styles and showing a refreshing lightness and fruity flavours.

One of the most popular Jura styles, often the unsung hero making up a good 50% of the production of many domaines, is sparkling Crémant. Yet again, Stéphane innovates. His two top sparkling cuvées are the complex “Indigène”, where yeast from fermenting Vin de Paille is used for the second fermentation via the Liqueur de Tirage, and “BBF”, a low dosage sparkler which sees oak and is aged for over 50 months before release.

The limits of experimentation here know no bounds, and the domaine’s next trick was amphorae. First they started making a Chardonnay, “en Amphore”, macerating the grapes for six months in terracotta amphorae made specially for them in Vaison-la-Romaine in the South of France. In contrast, and contrast is the key experiment here, Stéphane also makes a red from Trousseau which undergoes a much longer maceration in Georgian Qveri. Both wines are rare, with a usual limit on purchases of two or three bottles. They are available from mid-November and sell out early in the New Year. Arbois restaurants are a good bet for latecomers, and we had a lovely orange and earth scented Amphore 2009 in La Balance last week. But beware – you will be totally unaware that this wine contains 15% alcohol until you come to walk home. 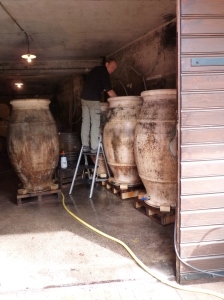 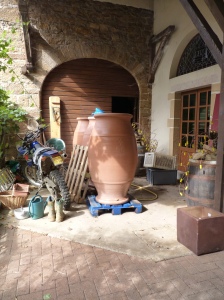 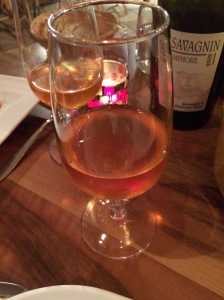 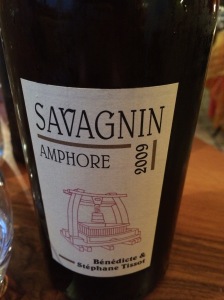 The two most recent experiments are very different. If fame came initially from those early single vineyard Chardonnays, Stéphane had a plot just north of Arbois which he was sure could produce grapes of the very highest quality. Planted at high density to restrict yields, the “Clos de la Tour de Curon”, easily visible below the tower from the edge of town, produces a Chardonnay on chalky, partly terraced, soils with a southerly exposure which may well be destined to become the Grand Cru of the region. At a whopping €60 a bottle, there is evident ambition here. 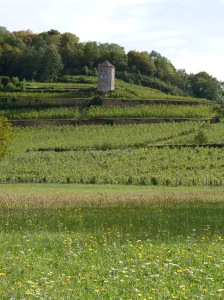 The latest trick takes this man who can’t seem to stand still a way down south. The domaine’s Vin Jaunes, never being likely to follow the herd, come as not one but three separate cuvées – “en Spois”, “La Vasée” and “Les Bruyères”. They represent either different soil types or exposures, and they are very different from each other (en Spois is usually the most forward of these long-lived wines which don’t deserve to be touched until, at the very least, ten years from harvest).

Before long those wandering eyes caught a glimpse of a small plot in Chateau-Chalon, that most famous source of the “Vin Jaune” style (wine aged under a veil of thin  flor for 60 months and sold, after the Percée Festival, in the seventh year after harvest). I bought my first of his production this year and will not likely open it for some years, but as with everything at this domaine, early tasting notes suggest a distinguished addition to the Chateau-Chalon tradition, a wine of typical finesse which one day will accompany a chunk of 24-month-old Comté and perhaps a few fresh walnuts.

According to Wink Lorch (Jura Wine, Wine Travel Media, 2014), Stéphane has promised his wife that he will not expand beyond their current 50 hectares, though it’s hard to see him standing still. He’s now one of the most influential faces, both in the region and as an ambassador overseas. More importantly, he’s been the catalyst for so many young winemakers who are beginning to make a name for themselves. His generosity in mentoring will be one of his lasting legacies. So many wines I now buy are made by people who worked for him, or who he actively encouraged and helped.

For me, personally, it is gratifying to see that this domaine, which I visited almost (but not quite) by accident so long ago, now presents such an international face for this profoundly bucolic region in Eastern France. I hope that the domaine continues to be so spectacularly successful in the next thirty years and beyond as it has been in the decades since I have known it.

Although the information in this article comes from my own research and my long knowledge of the domaine, I would like to thank Wink Lorch, whose wonderful Jura book, mentioned in the text above, allowed me to check one or two specific factual details in addition to those found in the sources produced by the domaine. As one of the finest wine books written on any specific wine region, it is an essential purchase for anyone wishing either to visit the Jura region, or simply to try its wines and other produce.

If you have not already seen it, the article preceding this one covers the town of Arbois and its attractions, and those of the surrounding countryside.

Writing here and elsewhere mainly about the outer reaches of the wine universe and the availability of wonderful, characterful, wines from all over the globe. Very wide interests but a soft spot for Jura, Austria and Champagne, with a general preference for low intervention in vineyard and winery. Other passions include music (equally wide tastes) and travel. Co-organiser of the Oddities wine lunches.
View all posts by dccrossley →
This entry was posted in Wine, Wine Agencies and tagged A&M Tissot, Amphora Wines, Arbois, Bénédicte Tissot, Clos de la Tour de Curon, Jura, Montigny-lès-Arsures, Stephane Tissot, Vin Jaune. Bookmark the permalink.