Here’s to Your Good Health!

The ping-pong debate over the health benefits of drinking wine is never far from the mainstream press in the UK, and the same can be said for most other Western countries too. It might not shock anyone that this has pretty much always been the case, and a nice little discovery last week illustrates the point.

A family member, back in the UK for part of the summer, decided to undertake the mammoth task of tidying their room. They have a desk which belonged to their grandfather, and down the back of a drawer they found a clipping from a newspaper. We’re not sure which one, and we are not certain of the date but we think it may be from the late 1940s or early 1950s. It’s titled “Wines and Health” by “A Physician“.

It begins as it means to go on…”When St Paul wrote of ‘a little wine for thy stomach’s sake and thine often infirmities’ he certainly wrote that which the majority of medical men of to-day (sic) know to be scientifically correct”. A great start. The author then goes on to discriminate between red and white wines.

White wines are partly dismissed as temporary stimulants, which escape rapidly through the skin, mucous membranes and kidneys. Red wines, however, are more “tonic” and “persistent”. Then the author starts to describe the particular qualities of individual wines, which is where it gets interesting.

“Sherry, for instance, is as a rule too alcoholic for the sick”, but, Mr Physician says, can be used with soda water in cases where Champagne is “too expensive”. I am not too sure I’ll be trying this with my next batch of Equipo Navazos Fino!

“Madeira is the most gouty of wines…Port is also a gouty wine…but may be taken in small quantities for diarrhoea”. It also enriches the blood, apparently. Burgundy and Claret are recommended after exhausting illnesses, and they are praised as an aid to digestion. The author asserts that Claret is actually the only safe wine for “gouty persons”.

Sauternes is praised for its use in convalescence too, but also in cases of malnutrition. Great, now we know what to ship to the next famine zone instead of rice and water, but with all that sugar in it, perhaps he (come on, 1940s/50s, probably “he”) has a point.

One of the great forgotten secrets of the wine world is revealed in relation to Moselle (sic) and hock (sic) – they “are best for brain workers, who need a digestive stimulant”. So true, nothing beats a glass of Wehlener Sonnenuhr as a late afternoon pick-me-up to get you through that last hour at the desk, slumped in front of the computer.

What about Champagne, perhaps the most written about wine in medical terms? An interesting aside suggests the author was not happy with the pricing of the greedy Champenois. He says “Champagne has often been called the ‘drink of the gods’ and at present and probable future prices it is well named”. The expert tells us it is of great value in some acute diseases and when quick action is needed (quick, call an ambulance and open the Bolly). It also acts when “the digestive processes are slow…But for the gouty individual and the diabetic it is a wicked drink. Those suffering from diabetes should drink claret, hock or dry sherry…” I suppose we are still in the era before the modern Brut style was ubiquitous in the UK and Champagne was much sweeter, though it would probably still suffer from the same admonition, except for the Brut Zero tendency.

This all reminds me of when I was in my twenties and I had a brief sojourn in the Hotel Dieu on the Ile de la Cité in Paris. For a few days I was pretty ill with food poisoning, but after things got a little better I settled down to drink wine with both lunch and dinner as a considered part of restoring my equilibrium (watching the Tour de France on live TV in between helped in that regard too, it all seemed so civilised).

Of course, the modern day physician would probably shudder at the advice above. Even in France, I’m sure wine with hospital meals can’t have survived the post-Sarkozy neo-prohibitionism (and, sadly, that particular hospital within sight of the façade of Notre Dame is now closed, I walked past it just the other week and let out a small sigh of nostalgia). But at least the post-war doctor gives a nod towards more modern attitudes towards the demon drink, finishing with “It will be seen that, judicially used, wines are of distinct value in medical treatment, but they should always be taken with food, and preferably late in the day”. I’m no medical man, but I can’t agree with that last bit. But then I’m not expected in the operating theatre after lunch. 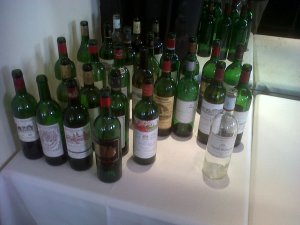 (above – a decent lunch, The Ledbury)

Writing here and elsewhere mainly about the outer reaches of the wine universe and the availability of wonderful, characterful, wines from all over the globe. Very wide interests but a soft spot for Jura, Austria and Champagne, with a general preference for low intervention in vineyard and winery. Other passions include music (equally wide tastes) and travel. Co-organiser of the Oddities wine lunches.
View all posts by dccrossley →
This entry was posted in Wine and Health, Wine Books and tagged Benefits of Wine Drinking, Gouty Wines, Wine and Health. Bookmark the permalink.

1 Response to Here’s to Your Good Health!