Okay, I admit, my proclivity for really corny headlines has seemingly gone too far this time, but you should not despair. Howard Ripley can be described as nothing less than talented, for he’s assembled much of the cream of German wine into a star studded portfolio, and he has the class to show them off each year in the stately rooms of Middle Temple Hall.

There were a number of tastings on in London yesterday but, having missed out last year, I was very pleased to be able to go to taste Howard Ripley’s 2014 offer. The location was especially nice for me, it’s the Inn of Court to which I belong, though my attendance there is much diminished nowadays. Middle Temple is one of the four Inns of Court to which English Barristers are affiliated. Built between 1562 and 1573, the Hall hosted the first performance of Shakespeare’s Twelfth Night in February of 1602. A nice venue in which to show these traditional wines, once so much more appreciated in the UK. The tasting took place in the Queen’s Room and Parliament Chamber, among portraits of Stuart Kings and Lords of Appeal . 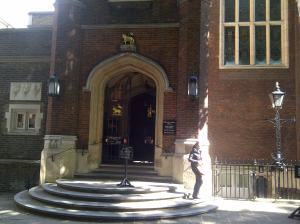 A lot has been said about the 2014 vintage, not all of it complimentary, but I take the Burgundian view, that the best producers will release good wines in most vintages, whatever their vicissitudes, and anyway, I think some of the criticism may be a touch over stated. On the whole that truth was demonstrated here, although not every wine shone. One or two had challenging aromas, some lacked poise and definition. But the dry and Kabinett wines shone brightest as a group (though to be fair, far fewer wines of higher pradikats were on show or were produced). As someone remarked, it also seemed to be the Mosel producers who made the best wines over all in this category, despite them having perhaps the most challenging vintage.

What impressed? Von Schubert’s Abtsberg Kabinett (Maximin Grunhaus) was glorious, but don’t believe me – we go back a long way, and only the other day I truly enjoyed a 2006 Superior QbA. Most people seem to agree that the Peter Lauer wines shone. Not everyone seemed to agree with my liking for Willi Schaefer this year, but again, this is a producer I like. I agreed with some about the very good Schloss Lieser, except that I was getting some very odd aromas from both the Juffer Sonnenuhr and the Niederberg Helden spätlesen, and not (I think) what some generally term sponti aromas. (This was from end of bottle samples, others concurred at time but later tasters did not find such problems on subsequent bottles).

Other successes, well, Keller’s Rheinhessen offerings were, for me, outstanding, though that may not quite apply to the entry level Von der Fels in 2014 (though I often wonder that this can be tough when very young, despite its price). Egon Muller’s straight Scharzhof was very good (as it should be) as well. But you probably knew that. 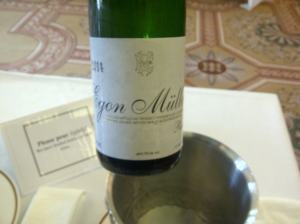 I also liked Donnhoff’s Hermannshohle among the spätlesen. Keller’s Pettenthal was a good step up, though. The two auslesen I liked most (out of the five shown) were Zilliken’s Saarburger Rausch and Keller’s Hipping Goldkapsel.

One more name I plan to look out for, Julian Haart. These were new to me, and so special mention must go to those wines, to which I gave consistently good scores.

To sum up? Altogether I liked the wines. Of course, they won’t compare to some not too distant vintages. But that’s within the context that people are (rightly) calling this a Kabinett (and trocken) vintage…and I love Kabinett wines (and increasingly, the dry wines too). There wasn’t too much acidity, which might suggest the wines will not last the long haul? I don’t mind. Give me Kabs I can glug now.

The one thing you can’t fail to acknowledge is that the prices are astounding…in a good way. For many of the Kabs you’ll pay for a case of six what you’d pay for a single bottle of other “fine wine” popping into your local independent. For the very top wines, well, they are doubtless all allocated by now, but they’re still amazing value for money compared to almost any other fine wine region, not to mention the realistic alcohol levels (which appeal on sunny days like today). Indeed, if the wines do turn out to be less fancied, irrespective of quality, now may be the time to dip in, with a little sage advice. I should add that I’ll be taking that advice, I claim no special expertise in this particular.

I’m hoping to do a bit more research on the ground quite soon, hopefully a case of watch this space.

Writing here and elsewhere mainly about the outer reaches of the wine universe and the availability of wonderful, characterful, wines from all over the globe. Very wide interests but a soft spot for Jura, Austria and Champagne, with a general preference for low intervention in vineyard and winery. Other passions include music (equally wide tastes) and travel. Co-organiser of the Oddities wine lunches.
View all posts by dccrossley →
This entry was posted in German Wine, Wine Agencies, Wine Tastings and tagged Donnhoff, Egon Muller, German Wine Tasting, Howard Ripley, Julian Haart, Kabinett Vintage, Keller, Maximin Grunhaus, Middle Temple Hall, Mosel, Schloss Lieser, Von Schubert, Willi Schaefer. Bookmark the permalink.

4 Responses to The Talented Mr Ripley