It’s a Wonderful Life (That You Bring)

I’ve been up to a few things this month that didn’t really fit into any of the other articles, and I thought I’d mention them here. They do amount to a free plug for the places mentioned, but I don’t get anything in return, so the praise is genuinely due to these folks. As the New Year begins,  it can seem like life is tasting after tasting (I have four in the next two weeks and have had to turn down two more because I’d not have time to write them up). I also have a Sherry lunch next week, the first of the year, which I’m very much looking forward to. Then I’m off to Berlin for some natural wine. Life can seem pretty good if you write about wine. Sometimes it’s nice to acknowledge that.

I think that Winemakers Club is the most relaxed place to drink wine in London, and if you only want to eat a plate of charcuterie or cheese it’s easy to spend an evening there. The nice thing to do is to rock up, drink a beer, try some wines by the glass with a few nibbles, and then remember to purchase some bottles to take home.

I did just that earlier this month, and bagged a couple of bottles from Domaine des Marnes Blanches, one of the rising stars of the Jura region. We drank the pale, 11.5%, 2016 Pinot Noir last night. Delicious.

Winemakers hosts their next Great Exhibition Tasting on February 12th (Trade etc only) which has become unmissable (and with great luck on the travel front, I am not going to miss it). 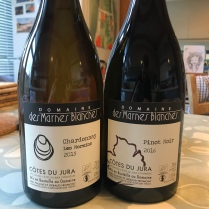 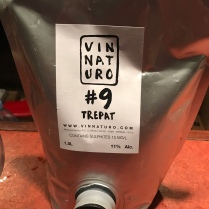 Right next door to Quality Chop House on Farringdon Road, every visit is a delight. Why? Because it’s one of those rare wine shops where if they don’t have what you came for, there’s always plenty more to tempt you. The only difficulty lies in the wine budget.

Especially good for Loire, Jura, Austria, New Spain and Grower Champagne, this photo is what I picked up on my last but one visit…Péron, Lassaigne and L’Octavin. The Péron wines need to be grabbed as they appear.

It’s good to see how the other half live, isn’t it. 67 Pall Mall is the exclusive Member’s Club for wine lovers in Central London’s Clubland. If you attend one of the tastings there, as I have, you are gently escorted to the basement via a different entrance, keeping you away from the members’ areas, so when an invitation came to go as a guest after the Ozgundians Tasting a couple of weeks ago I won’t lie, I jumped at the chance. Partly because just about everyone I know has already been.

If you are expecting attentive service in comfortable surroundings, this is exactly what you get. In fact it’s the kind of attention you get dining at The Ledbury and other such establishments. The wine list is very long, but does contain a separate and quite reasonably stocked natural wine selection. Prices seemed remarkably reasonable too, although members also have the option of choosing wine from their own private stash, kept in the cellar.

We began with a glass of Knoll Pfaffenberg Grüner whist waiting for another friend, after which we managed bottles of Franck Balthazar Cornas “Chaillot” 2015 (surprisingly approachable) and a very nice Ochota Barrels “A Sense of Compression” Grenache 2014.

The best lunch this month was at Noble Rot. Normally I would recommend their set lunches, which offer good value for the standard of cooking, but I was there with someone I’d not seen for a while and we decided that as the January set lunches are themed as “Cuisine Minceur” (as a tribute to Michel Guérard), we would plump (sic) for a few more calories.

But not too many. My own choice enables me to point out that the Slipsole and Smoked Butter starter here bears a conceptual resemblance, and an equally close one in terms of quality, to the signature version made by Nobrot’s Consultant Chef, Stephen Harris, at his Sportsman in Whitstable. This delicate but fresh and tasty dish is a must try. Exquisite in its simplicity and as close to perfection as one could expect.

Turbot in London is usually expensive. At Noble Rot you can get a reasonable chunk of it without paying posh prices, if it’s on the menu, of course, which thankfully it was.

The wine list is very extensive, and this includes a blackboard of extra “by the glass” fine wine selections (Puffeney Vin Jaune was tempting, and there was Château-Grillet and Buçaco Palace Hotel among others) at fair but not inconsiderable prices.

Noble Rot was very busy the other week, so that means it’s quite noisy (oddly enough the bar area, where snacks are available, can be quieter) and the tables are pretty small, but it doesn’t bother me. I’ve managed to walk in without a reservation if early enough, though perhaps I’d not chance it. If someone suggests lunch in the week, this is almost certainly where I’d suggest we go. 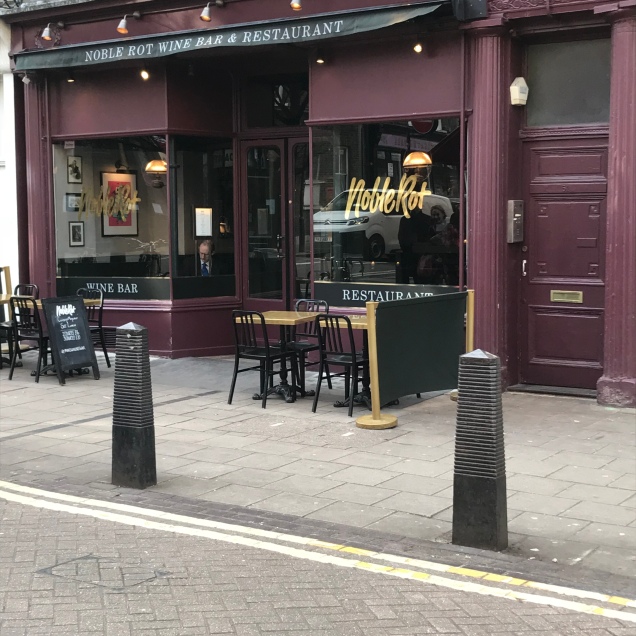 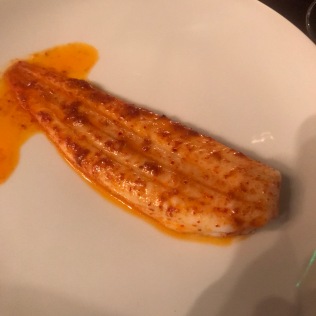 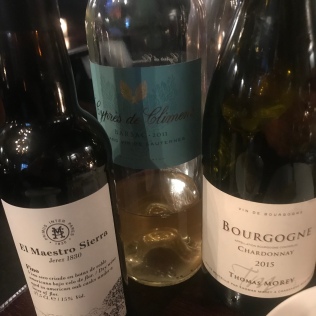 Another of my award winning wine shops. I thought I’d back up my frequent claims for this place with a little more evidence. I know people were paying attention when I mentioned they had a little of Martha Stoumen‘s “Post Flirtation” Napa Blend, and that they have become known as somewhere to chance your arm for a few Ganevats, but to show they are ahead of the curve for outside London I thought I’d show a photo of what I picked up this weekend.

Five of the bottles were from Dominique Lucas’ Les Vignes de Paradis. The estate is actually split into two, with Chasselas (along with some Chardonnay, Savagnin and others) grown in Savoie, around the southern shore of Lac Léman (Lake Geneva), within the AOP zones for Crépy, Marin and Marignan. These are stimulating wines, fermented creatively – forget your amphora and concrete eggs (which Dominique does use), there’s a cement pyramid here, in which the top Kheops Chardonnay is fermented. I think Les Caves brought only a very few into the country, so I was lucky. But all of the Vignes de Paradis wines are delicious, including those from the other half of the estate, in the Côte de Beaune, above Pommard.

The Burgaud in the photo is the Morgon Côte du Py Réserve 2010, which is drinking superbly, along with a Guiberteau Saumur Blanc 2015 and a not always easy to find Biondi Santi “Rosso” 2008 (the fine wine cabinet is always worth perusing here). Fuchs & Hase you know, I’m sure. This is “Vol 4”, based on Müller-Thurgau and Grüner Veltliner. 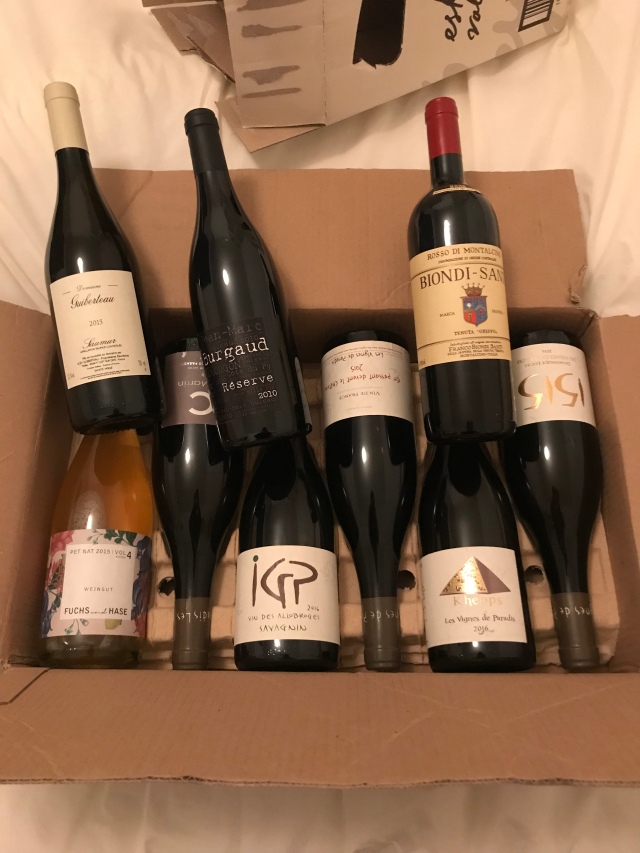 The next day we had a visit to The Shipyard in Lymington. The fish here is very good indeed, thanks in part to their partnership with one of the local boats. I’m always grateful to be able, sometimes, to take a few bottles along, and we get looked after tremendously well here by Paul and Lucie, usually with gin in some form or another. They do a truffle gin if you are adventurous.

We began with a really good pét-nat from Bergerac/Monbazillac. Château Barouillet is now under the winemaking hand of Vincent Alexis, who took over from his father in 2010. The estate makes a large range of wines from the wider region in all the local styles, but Splash is a recent addition, a pétillant-naturel wine made from Semillon. It’s dry and cloudy, and very impressive in context. More than that, it provides as much fun as any petnat I’ve drunk in the past year. I know that Wines Under the Bonnet brings in some of Vincent’s wines. I’m not sure whether they import this (friends had brought it back from a domaine visit) but they should.

An old Vouvray from me was next up, Huet “Le Mont” Sec 1995. This was darkish in colour but fresh on the nose with that characteristic appley/tarte-tatin note which older Chenins serve up. It was a good bit richer than I expected of a “sec”, but amazingly fresh as well. You get honey and a touch of waxiness on a very long finish. Exceptional, and drinking well now. Keith Levenberg said of this in 2016: “Spectacular, absolutely lights-out stuff, one of the greatest bottles of Huet I have ever had”. Well Keith, it’s still going strong. My greatest Huet? The 1959 Demi-Sec version of Le Haut-Lieu, drunk at RSJ (we miss RSJ) in 2009, at fifty years of age (but just £125 off the list).

Despite the sheer class of the Huet, it was matched by the last wine, Ganevat Vin Jaune 2006. This is undoubtedly young for this wine, and for Vin Jaune in general, but the bottle had been open for a couple of days. This had really allowed the contents to open up. The lemon acidity and any hardness had disappeared, and a nutty complexity was beginning to accompany a smooth palate of rich citrus fruit. Three ages of Comté would have been perfect, but The Shipyard’s cheese platter was a good second best. The real test of quality for Vin Jaune lies in its length, and this went on for an age. 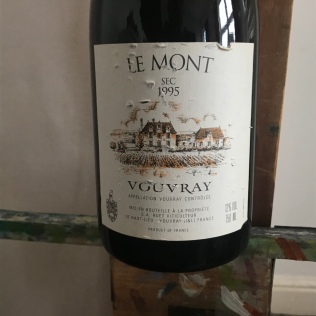 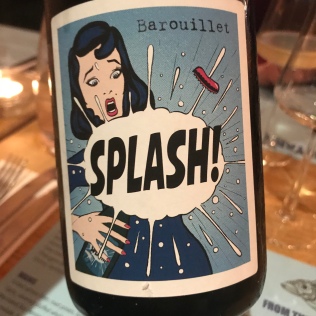 The beauty of my approach to wine, which looks at what is in the glass rather than what is missing, means that I can sign off Saturday’s wines as absolutely perfect. They will remain unbeatable until the next wonderful meal with wine mad friends. But I do know how lucky I am.