Radikon Action (To Unseat the Hold of the Monkey Mind)

Dynamic Vines showed eight wines from the Radikon family at Antidote (Newburgh Street, near Carnaby Street) yesterday. The reference in the title (to King Crimson‘s latest release) is not in the least bit fanciful. These are wines which provoke intense contemplation of all their qualities. None of them gives you what you might expect, and that is probably as true for those who don’t like skin contact wines as much as for those who are open to them. I’m sure you know which camp I’m in. In order to appreciate them, you do have to cast aside a few preconceived ideas about what wine should taste like, though, and even what it should be.

Stanko Radikon made a momentous decision in 1995, to eschew pesticides and other chemical preparations in the vineyard. His reason was simple. This is the year he decided to concentrate on skin contact for his wines, and skin contact requires both healthy and clean grapes. Another Radikon rule is that fermentation must be wholly with natural yeasts, and without temperature control. All of this builds wines which can age for extended periods, even without the addition of sulphur (they used to make cuvées with sulphur as well as the sulphur free ones, but gave up when they preferred the sulphur free bottlings on release). The wines can withstand, or at least recover from, temperature variations too, something often cited as impossible for sulphur free wines.

Within five years, they (after Stanko’s son, Saša, joined him around a decade ago, Stanko sadly passed away last year (2016)) were working with much longer skin contact times, and to eradicate potential TCA with extended bottle ageing, moved to custom made bottles with super premium corks. All but two of the wines below undergo long pre-release ageing, although there are also Riserva wines (not tasted) which spend considerably longer in bottle before release (and which are ferociously expensive).

The Radikon estate is now around twelve hectares in Venezia-Giulia, in the far northeast of Italy, in the village of Oslavia. This part of the region is designated Collio DOC, but as you will notice, all the Radikon wines are unsurprisingly labelled IGT. Slovenia is just over the hill. This enclave, north of Gorizia, has become known as an epicentre for experimentation, and for “orange wines” in particular (neighbours include Gravner, Dario Princíc and Primocic, among others).

Saša Radikon was on hand to pour and talk through the wines which, despite the bottle age of the final six wines, are all current releases and available from Dynamic Vines.

2015 IGT Venezia-Giulia “Slatnik” is a blend of Chardonnay and Tocai Friulano, from the vineyard of that name. This and the following wine both undergo a shorter maceration/skin contact than the remainder on show, around ten days. They come bottled in either 75cl or 150cl magnum, and we tasted from the latter.

Slatnik is pale orange in colour and it is really hard not to pick up orange peel and marmalade on the nose. The palate has plenty of texture, with quite smooth fruit underneath.

2015 IGT Venezia-Giulia “Pinot Grigio” is the other wine with just ten days of skin contact. The colour here is quite different, on account of the reddish skins of the grape variety. Imagine a ramato Pinot Grigio with the colour turned up several notches. It’s not exactly, pink, nor red, and certainly not the “partridge eye” of the ramato style. It has less texture, perhaps, than the blend above, but is also fresher, and the acidity is more pronounced as a result.

“Slatnik” and Pinot Grigio in magnum

2010 IGT Venezia-Giulia “Oslavje” is the first of the longer skin contact wines. This blend of Chardonnay and Sauvignon Blanc, and the two wines which follow, all see three months on skins, followed by four years in oak and a further two years in bottle before release. All the oak used is large format, of different ages, but used oak, not new.

Oslavje is a selection, not a single vineyard wine. It has an amazing bronze, or rust, colour with a mineral/earthy bouquet. There’s a lot of texture in the mouth, and tongue-coating earthiness, but there’s also a smoothness which goes hand-in-hand with the texture. It’s a feature of the Radikon style.

2010 IGT Venezia-Giulia “Ribolla Gialla” undergoes exactly the same fermentation as Oslavje, and has a similar colour, but shows more tannins, texture and dryness on the palate.

2010 IGT Venezia-Giulia “Jakot” is the Radikon wine I know best, and was indeed the first of their wines I ever tried. There’s a very slight difference in how this wine was showing, as compared to the previous two. I’d put it down to a slight (almost) sweetness of fruit on the nose and a delicate note of honey on the tongue, although the wine is bone dry. A degree more elegance and a touch more complexity.

Saša said that 2010 was a rainy vintage, which actually accentuated the character of the grape variety (Tocai Friulano, “Jakot” being, as you may know, Tokaj spelled backwards). For me, it was, and remains, my favourite of Radikon’s orange wines, and I think Saša’s in 2010, although I got the impression his heart generally lies with the Ribolla.

All of the above three wines are bottled in 50cl and 1litre formats. 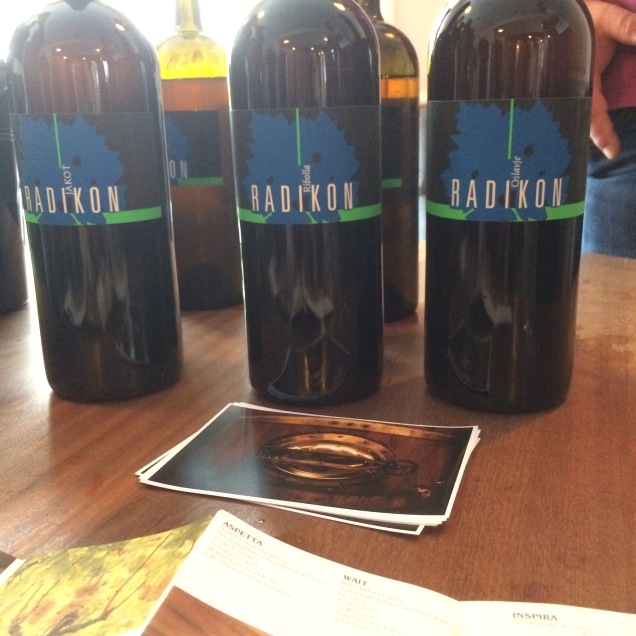 2005 IGT Venezia-Giulia “Merlot” is the first of the three reds, palish in colour and with a powerful nose of cherry, plum and fig. Alcohol is 14% and you just get a hint of that too. The fruit is plump, but the wine tastes very dry (not dried out). There’s a kind of double attack – fruit first, then tannins, which linger with acidity on the finish. This has seen eight years in barrel! 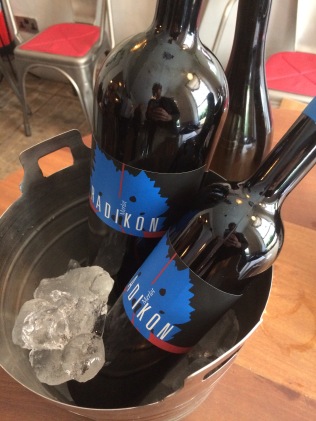 2004 IGT Venezia-Giulia “Pignoli” is a rare outing for the pignolo grape variety. It may be a rarity, but wine writers have recently woken up to its potential to produce great wines. This too is pale. The nose is quite reminiscent of aged Nebbiolo, perhaps more powerful, but also complex, attractive and haunting. The palate matches in complexity, but like all of these wines, there’s more than a hint of considerable capacity to age. Don’t think that because the wines are well aged on release, that they need drinking soon. That is very much not the case. 14.5% alcohol is slightly “visible”, but well balanced. 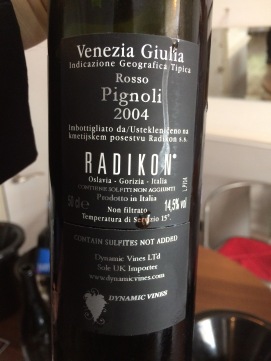 2003 IGT Venezia-Giulia “Modri” is 100% Pinot Noir. 2003 was the first vintage of the Pinot, which has spent a decade in barrique. The nose is very clearly Pinot Noir, although there’s no small hint of California via its sheer size, and it does come with a 14% abv tag. Yet again we see smoothness allied to a tannic structure, which makes itself known on the very long finish. Very attractive, with genuine presence. 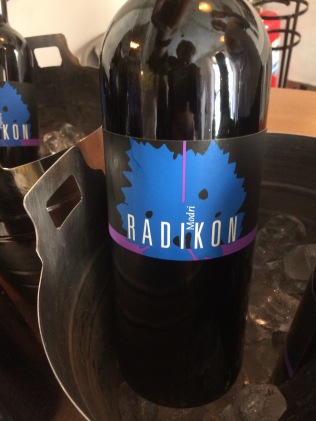 The red wines are also bottled in both 50cl and 1litre formats.

As I said, these are wines for contemplation, and for food I should say. You have to accept that they are living wines too. There’s a bit in Isabelle Legeron‘s book on natural wine where she quotes Saša Radikon. He says that “Chemical wines are like a flat line…that suddenly comes to an end”. I’m not sure I’m 100% in agreement, but he goes on to describe natural wine as being “like a giant wave”.

What he means is that sometimes the wine will show really well and other times, less so, I suppose reflecting the biodynamic calendar, perhaps. The picture of peaks and troughs does indeed reflect how natural wine can perform, and the peaks are the great heights to which these wines can climb. But as far as Radikon’s wines go, my experience has them far more often up at the peaks than down in any sun-starved, frosty, valley.

There is no doubt that many drinkers, unaccustomed to these flavours, would find all of the Radikon wines somewhat confrontational. But where some see confrontation, others will see their individuality, personality and soul. They are unquestionably wines which shine at table, with food. It’s what you’d expect of tannic wines.

If you compare the orange wines to red wines, you’ll see what I mean. Younger reds always taste better with food. It is also tempting, especially in the weather we are having in the UK right now, to serve them chilled. Ironically, I think Radikon’s reds take more to chilling than the orange wines. The former have their tannic edge taken away when cool, but the whites can lose their haunting qualities if you chill them down.

Maybe that’s just my preference. However you drink them, these are masterful wines, in touch with something quite profound at times. So do drink them.

I always enjoy being back at Antidote, whether to eat, drink, or to taste, and I must plug them as I always enjoy the food, and they do have some exceptional wines if you like your vino naturally inclined. The venue suits a small tasting like this (in the upstairs room), and it’s always a good sign when you are handed a Zalto Universal to taste with as you go through the door. 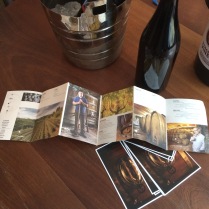