If Domaine de la Tournelle has now established itself firmly among the top names in Arbois, Domaine Hughes-Béguet is one of a select band of young producers who will one day gain similar recognition. Patrice gave up a job as an IT Consultant in Paris, took the Wine Diploma at Beaune, and took over what has now grown to around four hectares of vines in Pupillin, Arbois, and his home village of Mesnay. He is committed to biodynamic methods, and is Demeter certified, quite unusual for such a small producer. In a region where biodynamics and natural winemaking are hardly a rarity, few are as committed to all aspects of ecology as Patrice, and few young vignerons work as hard as he does too. His only help is an intern, and in fact you can tell how busy a life he leads with two young children – he’s had no opportunity to update his web site.

The domaine is easy to find, right next to the church in Mesnay, a village which is more or less connected to the eastern side of Arbois. There’s a large hanging sign, somewhat like an English pub sign, and the cellars are right under the house. Despite the large number of cuvées Patrice makes from his small vine holding (I think he may be trying to cut back, but there are hidden gems awaiting the light of day), the cellar is neat and tidy even at such a busy time of year, tanks and larger wood kept clean, racks of bottles at the other end.

The treat for us was that Patrice had already harvested many of his grapes. He said they were very ripe, and healthy, a trait typical of vines treated with biodynamic preps, and he had been worried about the grapes swelling from the rain and the risk of encroaching disease. We were able, therefore, to taste our first 2016s straight from tank, just as they were beginning their fermentation.

The Ploussard juice set aside for the 2016 pétillant naturel had a lovely fresh grapefruit flavour with a good lick of residual sugar (of course, it will ferment out dry). In fact, every tank sample tasted pure and fresh. The juice for the 2016 Ploussard itself had a ripe raspberry note, and already registered 2% alcohol. It will have a longer maceration. The Ploussard from Pupillin’s Côte de Feule had been picked the previous day and was already starting to ferment (a sign of good ambient yeasts). Even now you can perhaps see a different dimension to this must from such a renowned site. It always ages well, and I still have the odd bottle from 2011 and 2012.

The top Trousseau grapes from Les Corvées had not yet been picked, but those from Feule, and from Champ Fort (Patrice’s vineyard in his home village, Mesnay) had been. He used a tiny bit of Ploussard juice to get the fermentation going quickly, and he says they will have quite a long maceration. There’s already a hint of spice in there along with a touch of cassis.

You could happily drink these musts, and they have none of the potentially gut-rotting acidity that you can get when tasting some wines from the tank (none more gut-rotting than the Seyval Blanc we made last year). 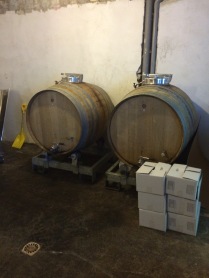 Some samples from tank and barrel

2015 was Patrice’s best vintage to date. The wines have massive potential, and Patrice is very happy because it was the first vintage he felt he could bottle every wine without the addition of sulphur, and with no filtration either. This is normal for his reds, but a first for his whites. Patrice said that he sees a different wine emerge after those interventions and to be able to release the wine he has lived with through its élèvage, unchanged, is so satisfying. Above all, the wines keep their brightness of fruit and Patrice feels this is a big evolution in his winemaking.

I must say something about the new wine labels. The original Hughes-Béguet label was quite plain, and although a nice label doesn’t signify a nice wine in the bottle, it does help create a pleasing package and a good overall impression. The new label is an early twentieth century lithograph used by Patrice’s grandfather, who had a licence to distill Gentiane, a spirit made from the gentiane’s root, and Patrice has adapted it for the domaine. Very nice indeed.

Patrice has always used wordplay for the names of his cuvées, and now we have a new set since I last visited him in 2014. “So True”, a typical French verlan, for his Trousseau; “Oh Yeah!” for his topped-up (ouillé) Savagnin with a Charles Mingus album connection; and “Straight No Chaser” (more Mingus) for the Chardonnay. I think the pink pét-nat remains as “Plouss’ Mousse” (being a Ploussard), and in true Burgundian fashion, the single vineyard reds, Côte de Feule and Champ Fort, remain the same as well. There’s also a barrel maceration cuvée called “Orange was the Color of her Dress”, another Charles Mingus song, showing where Patrice’s musical loyalties lie.

A final note – we drank the 2015 Ploussard pictured above with friends, accompanying an aromatic couscous dish with roasted vegetables, and it was delicious. There’s a slight spritz of protective CO2, then fresh fruit all the way. It’s a beautiful colour and, although it’s quite a light wine intended to be enjoyed among friends, it did the dish justice.

Hughes-Béguet wines have been quite hard to find in the UK. The Wine Society did import a couple some time ago, but the good news is that Les Caves de Pyrene are now importing the whole range from Patrice and Caroline, so British wine lovers will have access to them, including the stunning 2015s, when shipped (this importer has the most impressive Jura list in the UK). But if you do venture to Arbois, a warm welcome here is guaranteed, by appointment of course. If you don’t speak confident French, don’t worry, Patrice speaks excellent English.

Writing here and elsewhere mainly about the outer reaches of the wine universe and the availability of wonderful, characterful, wines from all over the globe. Very wide interests but a soft spot for Jura, Austria and Champagne, with a general preference for low intervention in vineyard and winery. Other passions include music (equally wide tastes) and travel. Co-organiser of the Oddities wine lunches.
View all posts by dccrossley →
This entry was posted in biodynamic wine, Jura, Natural Wine, Wine, Wine Tastings, Wine Travel and tagged Arbois, Côte de Feule, Champ Fort, Domaine Hughes-Beguet, Jura, Jura List at Caves de Pyrene, Jurawine, Mesnay, Patrice Béguet, Plouss' Mousse. Bookmark the permalink.