I’ve just got home from my annual Jura trip. For the past three years I’ve visited the region around harvest time. It’s a chance to see what the current vintage is like. It’s less easy to visit busy producers, but thankfully a few of my favourites know me well enough to make time to see me. I’m grateful for their generous welcome. A few had begun picking and a few were about to do so. 2016 will be a tough year for some, but those who sort their grapes will make good wine – there is disease, including some mildew and rot, and some Asian Fruit Fly (drosophila suzukii) attacking the thin skinned Poulsard. If you follow social media, sorting has been the over riding message through the whole of France this year. But the unaffected grapes are healthy, and the old adage that good producers will only release good wine, whatever the vintage, holds true as ever.

Through the next few days I shall post several articles. I’ll begin by profiling some producer visits, I’ll write about a well known festival in an unknown location, and will finish off with some general chatter and news about Arbois and the region as a whole. I hope you enjoy another short trip into Jura.

The pleasant garden, and the tower hidden by the tree, form the backdrop to Domaine de la Tournelle’s summer bistro on the banks of the Cuisance (open through summer to the first weekend in September in fine weather)

I won’t deny that when I got a message from Evelyne to say that she could fit in a visit to Domaine de la Tournelle despite hectic harvest preparations, I was especially relieved as well as happy. I did taste with Evelyne and Pascal Clairet at Dynamic Vines’ last London portfolio tasting, but the Domaine is one of my very favourite Arbois producers and I was especially keen to grab a few bottles for my cellar. In the end we tasted for an hour-and-a-half, despite me asking to be thrown out when we’d overstayed our welcome. Evelyne is one of the most relaxed and friendly winemakers in the region.

With Jura wines it is traditional to start tasting reds before whites, building up to finish with Vin Jaune, maybe a Vin de Paille and even a Macvin. We started with the latest vintage of the first Tournelle wine I ever drank, L’Uva Arbosiana 2015. It’s a carbonic maceration Ploussard (the Clairets use the “Pupillin” spelling for this pale red grape) aged in foudres for three or four months and then bottled without sulphur. Transportation at 14 degrees or under is recommended. Although I’ve had the odd bottle show reduction, which always goes away with time open, or a shake in a carafe, I’ve never had a bottle spoiled through heat exposure, and one or two have travelled with me at well over 14 degrees. My theory is that a uniform temperature is safer than a variable temperature for all wines, but especially so for natural, unsulphured, wines. There’s always a touch of CO2 which protects the wine, in any case. The bottle we tasted on Friday last week was very much alive with fresh red fruit, and no sign of any reductive note. This is a glugger in the very best sense, and followers of my blog will know it’s a wine I’m happy to glug fairly frequently when I can get it .

Discussing the harvest, which La Tournelle were about to begin, Evelyne said that at the end of a period of very fine weather they had experienced about 100ml of rain the previous week. Not only were some berries in the region quite big as a result, but so were the pips. Evelyne was prepared to make sure only fine and healthy fruit was used, the kind of meticulous detail which has cemented the domaine’s reputation in recent years. Gentle pneumatic pressing is another winemaking practice at this address, which can be key if the pips are to be kept intact.

The Trousseau here comes from the “Les Corvées” vineyard, which stretches north from just outside Arbois towards the Trousseau heartland around the village of Montigny-les-Arsures. The 2014 has the classic darker fruit profile of this grape, and even more than usual of the attractive spice notes that often come with it. But the domaine’s Trousseau is always one of the fresher and livelier versions, and there are some red fruits here as well as those dark fruits. Really vivant. Freshness is, for me, the real hallmark of the Domaine de la Tournelle wines across the whole range. Some producers try to go for a heavier profile with Trousseau, and you then get a different kind of complexity. Evelyne and Pascal want to make wines to drink rather than contemplate. I already have a few bottles of the ’14, so I was pleased to find that they were not completely out of magnums. At less than the price of, say, a bottle of decent middling Barolo, a magnum of the Corvées is a bargain as well as a thing of beauty.

Evelyne Clairet who, with Pascal, form the team behind Domaine de la Tournelle in Arbois

Moving on to the whites, the Terre des Gryphées Chardonnay (2013) sees a very gentle pneumatic pressing of whole clusters, followed by vinification in old wood on lees for two years, topped up regularly. The wine unfolds slowly in the glass, yielding more and more complexity. It shouldn’t be served cold, ideally at 12 degrees centigrade. It’s a classic Jura blue-grey marl Chardonnay with a mineral streak and that house freshness. It looks like around a third of their 2016 Chardonnay has been lost to mildew, but others have been harder hit.

There are two styles of Savagnin at La Tournelle, as at most Jura domaines these days. It’s more than a hunch that the ouillé (topped-up) version is Evelyne’s favourite wine in their range. Fleur de Savagnin is a beautiful wine every time I taste it, and the 2013 is no exception. Purity is the only word you really need to describe it, although you could say it combines a citrus freshness and acidity with a little nutty complexity which sits just beneath that layer, if you wanted to be a bit more verbose. We drank a bottle of this earlier in the week with friends and it truly is the reine des blancs of Arbois.

The Savagnin de Voile 2012 is described by Evelyne as very much the little brother of the Vin Jaune. There is truth in this, because the domaine only ends up keeping around a third of the Savagnin barrels aged under the voile of yeast for Vin Jaune. The rest, after three rather than the seven years ageing the Vin Jaune sees, are bottled to create this cuvée. As the wine is a potential Vin Jaune from the start, selection is strict and it’s more a question of stylistic evolution and the voile which decides what happens to each barrel. It’s a very fine wine.

The current bottling of La Tournelle’s Vin Jaune is 2008. It’s one of the freshest VJs on the market, a style I like very much. Some Vin Jaune is fatter, some even ponderous, but Evelyne and Pascal stick to their house style. It’s lighter and fresher, but it doesn’t have an overbearing acidity, which means it is truly enjoyable on release if you really can’t wait. That emphatically cannot be said of all VJ. Of course, if you are patient you will be rewarded, but not everyone can be.

I’m often asked what to do with Vin Jaune. First, don’t serve it chilled. Cool is okay if it’s winter, but it needs warmth to open up and show the complexity which makes it one of the world’s unique wines. Some people will tell you to drink it with a local dish like coq au vin jaune et morilles, but I personally would drink a nice Savagnin such as Tournelle’s de Voile with that. I’d also hesitate to cook with Vin Jaune (at €40-50/bottle), using a similar Savagnin instead. Some chefs do just that and finish the dish with a little Vin Jaune after removing from the heat. My suggestion is to drink Vin Jaune with Comté cheese, perhaps “three ways” with a plate of young, not so young and old Comté, along with a few fresh walnuts. Let the wine shine, as indeed it does, quite literally, in the glass.

The whole philosophy at La Tournelle is based on respect for the environment. No chemicals are used and biodynamic preparations are applied as part of a holistic approach to viticulture and winemaking, which includes making wines which make you happy to drink them, rather than pensive and inward looking. That’s not to say they’re not complex. They are, but on a wholly different level. Please excuse my enthusiasm. 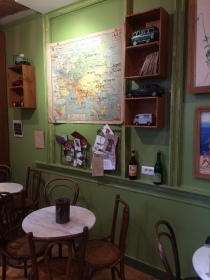 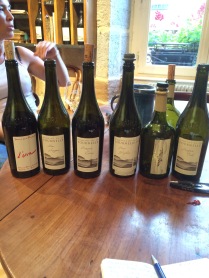 Domaine de la Tournelle’s tasting room and summer bistro can be found at 5 Petite Place, Arbois, just a minute from the Tourist Office and the church of Saint-Just.

Their wines are imported into the UK by Dynamic Vines .

In addition, Pascal and Evelyne have a stake in Antidote Restaurant and Wine Bar in Newburgh Street, off London’s Carnaby Street, and several of their wines can always be found on the list there. Winesearcher shows further stockists, including many in the United States via their East and West Coast importers.