The Fête du Biou is a rather special festival at harvest time in the Jura Region. It takes place in Arbois on the first Sunday in September, with a smaller version in Pupillin on the third Sunday. What is much less well known, and I’ve not seen it publicised in the UK, is that the same festival also takes place in the village of Vadans on the first Sunday after the Saint’s Day of St. Maurice, patron saint of the village church.

The Festival of the Biou celebrates an obscure biblical story of the return of the Israelites to Canaan. Spies were said to have been sent out to survey the land and they returned with an enormous cluster of grapes, known as the Eschol, borne on a pole. There’s a famous painting by Poussin in the Louvre illustrating this (The Spies with the Grapes from the Promised Land). So every year the vignerons of the region get together and donate some fine looking red and white bunches which are made into a large cluster of grapes, just like that in the photos below. On the day of the ceremony the chosen producers go around the town or village in procession with the Biou, in the same way as they process with a cask for the Percée du Vin Jaune at the beginning of the year.

The Percée , linked to the festival of St. Vincent (patron saint of wine growers), and celebrating the release of the new vintage of Vin Jaune, has the major disadvantage of taking place in the coldest weeks of the year, in a region known for its tough winters. In whichever town in the region the Percée is held each year, vast crowds attend [although there will be no Percée in 2017]. In Arbois, the Biou Festival is only slightly less well attended. After the procession of the vignerons in their costumes, accompanied by all the pomp of a rural parade, the Biou itself is blessed in the Eglise St-Just, where it then hangs above the transept, eventually filling the church with the smell of just fermenting grapes.

The procession is a big thing in Arbois. The whole town turns out with thousands of visitors, and this year with heightened security it was almost impossible to drive in. Pupillin’s affair is somewhat smaller, although the village has seemingly established a welcome tradition that women vigneronnes carry the Biou – in Arbois it’s all very much a masculine affair.

But on Sunday 25 September we were invited to Vadans to witness the third of these festivals, an altogether smaller affair, but none the worse for that. Where on earth is Vadans, you ask? Arbois’ vineyards spread out from the town in several directions. Those up towards Arc-et-Senans and Port Lesney, to the north, are beginning to get some recognition now, via the small clutch of exciting producers up there. Vadans lies more or less west of Arbois, along the road to Dôle, close to Molamboz, Montmalin, St-Cyr, and a little way past the slightly better known Villette-les-Arbois. This is really a bit of a quiet corner of the Arbois vignoble, but there’s no lack of vines.

There are few producers around here you will have heard of, although Jean-Baptiste Menigoz at Les Bottes Rouge is at Abergement-le-Petit, on the other side of the D469. Joseph Dorbon is the largest viticulteur in Vadans and he has just three hectares of vines, although the larger Domaine de St-Pierre in nearby Mathenay has 6ha. One name you will have heard of is Puffeney. Frédéric Puffeney is the nephew of the newly retired “pope” of Montigny, whose small domaine produces less exalted, but equally less expensive, wines. I think his Crémant is one of the first to sell out, unsurprisingly for around €8/bottle.

One producer you won’t have heard of is Madelon Peters and Marcel Hendrickx, a Dutch couple who have settled in the village. Marcel is just starting out on the road as a vigneron, with a couple of plots of his own vines as well as some bought in fruit. The domaine doesn’t even have a name yet, though Domaine Marcelon has been mooted – it combines the couple’s names, but also translates as “little warrior” (derived from the Roman, Marcellus), quite apt as Marcel was one of the spear carriers at the Vadans Biou Festival this year, having carried the Biou itself in 2015.

Madelon and Marcel were the reason we were in Vadans, and it was to their house that we retired after the Marseillaise sung by the children, the speeches, and the drinks and cake (all the villagers club together to provide these) behind the Mairie, which followed the church service. It’s nice that it is the young wine producers who carry and guard the Biou as they move in procession around the village, and it’s the village teenagers who prepare and serve the food and wine under gentle supervision of the older producers. Everyone was very merry, and I had to endure some post-brexit ribbing with a certain stoicism, and the occasional wobbly old lady, but a fun time was, as they say, had by all. There’s no doubt that it’s really nice to experience events like this in rural France. You get a sense of the strong community which exists, as it certainly does in Vadans, and you can enjoy seeing the importance of the traditions which bind communities together. As the video shows, it’s all pretty informal and lighthearted, and we were made to feel very welcome as a part of it. 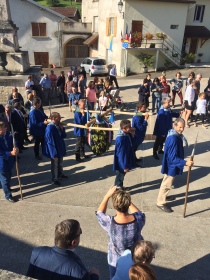 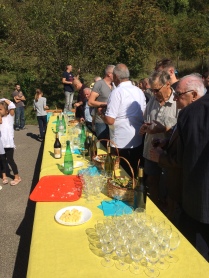 The Biou Procession and drinks, plus an amusing video showing off the prowess of the village band

Chez Marcel, we tasted a number of cuvées from 2015 and 2014 still awaiting bottling, and a little new must in vat. Marcel is still learning, and he’s a determined advocate of a non-interventionist approach to winemaking. This has led to a few issues, his 2014 Chardonnay not yet having gone through its malolactic, and a little brett on some Trousseau from 2014, but the wines we were able to taste showed genuine promise.

This was especially true of the bottle of red from bought in grapes which Madelon had given me to try a few days earlier. It’s a very nice Trousseau, well made with good fruit. A Pinot Noir/Trousseau field blend had been in tank for two days and had not yet begun its fermentation, but the juice tasted of pleasant cherry flavours, definitely showing potential. Whilst the 2014 Chardonnay in tank clearly needs its malo, another Chardonnay in wood previously used for two fermentations showed nice colour, although there was a little cloudiness due to moving the barrel whilst still on the lees. Again, I shall look forward to trying it when bottled.

Marcel clearly knows what he’s doing, having helped out, and learnt from, two very highly regarded Arbois winemakers, André-Jean Morin at Domaine de la Touraize in Arbois (who is also, incidentally, a Biou carrier in the Arbois procession), and Frédéric Lornet, an experienced producer in Montigny-les-Arsures. The grapes for the lovely red we drank from bottle (see photo above) came from André-Jean. The wines are not commercialised, and this itself would be a big decision for Marcel, not least because of the vast amount of admin it would entail. But everyone must start somewhere, and it was interesting for me to see the work of someone who is a little (maybe a lot!) further along the road than I am as a winemaker. I’m looking forward to seeing how this small domaine progresses because I have a hunch that Marcel is quite serious about making the best wines he can, and I believe he has the determination and empathy to succeed.

Writing here and elsewhere mainly about the outer reaches of the wine universe and the availability of wonderful, characterful, wines from all over the globe. Very wide interests but a soft spot for Jura, Austria and Champagne, with a general preference for low intervention in vineyard and winery. Other passions include music (equally wide tastes) and travel. Co-organiser of the Oddities wine lunches.
View all posts by dccrossley →
This entry was posted in Jura, Wine, Wine Festivals, Wine Tastings, Wine Travel and tagged Biou Ceremony, Fète du Biou, Jura, Jurawine, Marcel Hendrickx, Vadans. Bookmark the permalink.