Of Austria and Ostriches

If you read this Blog regularly you’ll know what I think of Austria – it’s the most exciting wine country in Europe right now. Let’s face it, I’ve probably written that phrase enough times this year for it to have become boring. But I exist in a little cosmopolitan bubble. In the wider world, Austria still figures only a little on wine shop shelves, it’s hardly mainstream. It’s almost as if much of our wine trade are ostriches when it comes to the wines of Austria, failing to realise just how good they are. There are a few older books on the country, but if you wanted to keep on top of what’s happening in Austria via the written word in the past few years, you’d have had to find something like the Vinaria annual Weinguide, in German. But like parts of that country, the Vinaria Guide is pretty conservative in its tastes. The great estates are lauded, but you don’t get to see the work being done by the younger generation.

Now there is, finally, a good, up-to-date book on the country, The Wines of Austria by Stephen Brook (Infinite Ideas, 2016). Many will know Stephen Brook as a writer and contributing editor for Decanter Magazine. He’s also perhaps better known for his works on Bordeaux and California, but he’s actually spent a lot of time in Austria over the years, ever since his post-student days in the 1970s, and there’s no doubt that he truly appreciates her wines.

You might have heard the term “Austrian Wine Revolution”. Austria is unusual, in that it might be said that it has undergone two wine revolutions. The first involved rebuilding confidence after 1985 diethylene glycol scandal (the antifreeze scandal to the tabloid press). The adulteration of wines, intended to be sweet, with this agent which gave the appearance of sweetness, took Austria out of UK and US wine shops for years when I was young. The result, the DAC system of wine appellations, is now one of the strictest in Europe, and the country’s important wine families fought back strongly with quality, to re-establish Austrian wines on the international market within little more than a decade.

The next revolution is the one which is happening now. It involves a strange coincidence – that so many of Austria’s wine estates are being turned over to a younger generation. This generation has traveled and worked internationally, and they also seem to be far more environmentally and ecologically conscious than their parents’ generation. Biodynamics is certainly not new in Austria (Brook points to the famous Wachau estate, Nikolaihof, converting in 1971), but today it seems almost as if most of the top estates follow this path. And natural wine is a major movement too, in a country which still has fewer than 50,000 hectares of planted vineyard.

That first wine revolution was led by a two-pronged attack: Kracher and Opitz leading the charge to establish Austria’s sweet wines from around the Neusiedler See on a level with the great dessert wines of the world, and the Wachau region’s top producers putting their greatest white wines, from Riesling and Grüner Veltliner grown on the steep slopes flanking the Danube’s northern bank, on a par with top White Burgundy.

The second revolution is being fought elsewhere, in regions such as Wagram, Burgenland, and even Vienna. Austria’s palate is being excited by a palette of exciting grapes extending beyond Grüner to Roter Veltliner, Rotgipfler and other autochthonous varieties, perhaps achieving their apotheosis in the Wiener Gemischter Satz field blends of the capital’s hills (I’m so pleased Brook acknowledges that “Vienna is capable of producing truly excellent wines that bear comparison with those from more prestigious regions of Austria”). But it’s really the Austrian red varieties which are now beginning to grab attention: Blaufränkisch, Zweigelt and Saint-Laurent, and often, these wines are made with minimal intervention, the whites frequently in amphora or concrete egg.

This is perhaps where I differ from Brook in my appreciation of Austrian wine. As you probably know, I adore the classics. It was the likes of Kracher, Prager, Knoll and Hirtzberger on whom I cut my Austrian teeth. But I can’t agree that cloudiness in one of Claus Preisinger’s Grüners is “alarming” (has he not seen Christoph Hoch’s Kalkspitz?). I find it boundary-pushing myself.  I don’t find some of the natural wines he has tried “hit and miss”, and I would not concur that biodynamic, orange and natural wines are a “fad”. Indeed, Brook states that he is “no fan” of natural wines. That’s fair enough, and despite expressing such sentiments, he is generally fair, often balancing such comments, and there’s no denying that such wines are indeed “Controversial”. But when he states that, in relation to orange (skin contact) wines, “the good wines tend to be outnumbered by the flawed wines”, I think that is a situation which pertained a few years ago, but that this has largely been reversed by improved winemaking decisions – often merely scaling back the time juice is left on its skins.

The reason we would beg to differ is quite simply explained, but it does go to the heart of “what is wine?”. Brook’s assessments are based on a fault criteria which has guided wine professionals in the UK since we began to appreciate wine centuries ago. His conception of what makes a good wine is followed by the established trade, and by established wine writers. I would claim, as someone who has grown up with French classics I can often no longer afford, that I know a faulty wine when I see one. But some wines straddle the edge of what is faulty and what is not.

Sometimes it is these boundary pushing wines which show real excitement, something new…when they get it right. Like Punk in the 1970s, New Austria has its rough edges, but it is through innovation and experimentation that adventurous producers reach for something new and sublime. I guess I just want to experience that experimentation, because wine appreciation ought to be a continuing journey, not one where we arrive at Pauillac or Vosne, or in this case, Oberloiben and Illmitz, and park the Jaguar. The bars and wine shops of places like the East End of London, and New York’s Lower East Side might not yet have credibility with the wine establishment, but like CBGB’s and The Marquee Club, their influence will be felt.

The Wines of Austria follows a fairly standard format for a wine book. A very good introduction sets the historical scene, then a chapter on grape varieties follows, before the meat of the book – the individual wine regions. In these Chapters each region is introduced before we get producer profiles of the region’s best domaines (for Brook, one or two of mine are missing, but not many). The book rounds off with a chapter on vintages, before a good Glossary and an index of wineries (which confused me at first, until I found Gut Oggau under “O”, Oggau being merely the next village to Rust, not a producer’s surname). There are four pages of atmospheric colour photos in the middle of the book. I’d have liked to see more from this exceptionally photogenic wine country, and perhaps some producer portraits. I accept that this would have cost money, but I can’t help recalling how Mick Rock’s brilliant photography enhanced Wink Lorch’s book on Jura Wine.

In the acknowledgements to The Wines of Austria, Brook alludes to the fact that it was not a book on Austria that he was originally asked to write for Infinite Ideas. I don’t agree with all of his assessments, nor do I share, quite obviously, all of his tastes. Yet I still have no hesitation in recommending the book to anyone interested in this most exciting wine country. Well written, thorough, professional and erudite, if a tiny touch conservative in the way of most older wine writers, but I have no criticism to make of genuinely held beliefs, and I am sure he’s a more experienced taster than I am. It is actually refreshing to see someone express an opinion in a wine book, especially as Brook acknowledges a great deal of assistance from the various Austrian wine bodies, a tiny fraction of which a poor wine blogger would envy, and which, so obviously, has had no direct influence on what he has written. Thank you Stephen Brook for taking the trouble to write it. If you want to learn about Austrian wine, do buy it. 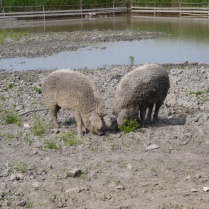 Writing here and elsewhere mainly about the outer reaches of the wine universe and the availability of wonderful, characterful, wines from all over the globe. Very wide interests but a soft spot for Jura, Austria and Champagne, with a general preference for low intervention in vineyard and winery. Other passions include music (equally wide tastes) and travel. Co-organiser of the Oddities wine lunches.
View all posts by dccrossley →
This entry was posted in Austria, Austrian Wine, Wine, Wine Books, Wine Writing and tagged Austria, Austrian Natural Wines, Austrian Wine, Austrian Wine Revolution, Stephen Brook, The Wines of Austria. Bookmark the permalink.

2 Responses to Of Austria and Ostriches