The Power of Flor

Most serious wine lovers have known about the Equipo-Navazos operation for some time now. Peter Liem (in Sherry, Manzanilla & Montilla, Manutius, 2012) describes Equipo Navazos as “The most distinctive and unusual project to come out of the Sherry region in recent times”. Founded by Law Professor and Sherry expert Jesús Barquin and Eduardo Ojeda, Technical Director of Grupo Estévez in around 2005, the label has been selecting wines of real intensity, quality and interest over the range of fortified Sherry styles. Collaborations have also led to sparkling wine (Colet-Navazos), brandy and other spirits, and unfortified whites (Navazos-Niepoort). It was the last of those which acted as a forerunner to the concept of “Florpower“, a range of wines made from the Palomino grape, aged under flor, but unfortified.

Thus far there have been two releases of Florpower. Following the EN habit of giving every release a consecutive number, they have been labelled “44” and “53”. There is a third bottling on the way. La Bota 44 was made from Sanlucar Palomino (mainly Pago Miraflores). Based on the 2010 vintage, it had 32 months under flor, consisting eight months in cask and then two years in stainless steel tank.

On release this gentle wine, only 11.5% alcohol (having lost 1% under flor), stunned us. Not only had we never really tasted its like before, it made us seriously wonder why unfortified Palomino hadn’t been tried commercially long ago. But then perhaps it has. The strength of Equipo-Navazos is in the selection of wines and, undoubtedly a factor, non-commercial levels of production (relatively speaking – 15 Sherry butts, I understand).

Florpower 53 (also labelled Más allá) is the same wine as 44, but it had a period of extra age (42 months under flor, including an additional ten in barrique). The freshness of the 44 is perhaps replaced by greater complexity in the 53. They are both very subtle wines, so the previous statement might be exaggerating, though they are clearly different wines. Bota 44 had apple and almond with a citrus overlay and a touch of yeasty, well, florpower on release. We drank a bottle of this a few days ago, the second to last bottle we have. It has changed quite a bit. It’s very orange in colour now, but bright. The nose has taken on even more complex subtlety, gentle and fragrant being about as close as I can get to a descriptor. The palate is still fresh and there’s more mandarin than lemon there now. It’s certainly different and could be a little scary for some (on colour alone), but everyone I know who has drunk it finds it a real mind opener.

What of  the future? There’s a new Florpower heading to the market this summer. It will be a 2012 wine which has seen nine months under flor in 600 litre casks followed by 21 months in a large steel tank (so less influence of flor there). The magic number will be 57, and it was bottled just a few weeks ago.

These wines are quite difficult to find in the UK, less so in the USA (which really seems to “get” Sherry, and thus wines like these, in a way we Brits find harder, doubtless down to our history of importing cheap sweet versions to sit on the sideboard). If you are an importer/merchant you really should look at these. They are truly breaking new ground in the best Equipo-Navazos tradition. The Navazos-Niepoort whites are much easier to find, both in London and with small regional merchants in the UK. They also age well, though they are quite stunning in the freshness of youth.

All of these wines display what for me is perhaps the most important aspect of every single EN release – on top of quality they are looking for wines with a distinctive personality. Every single Sherry released by the team is truly world class, and in my view the Florpower whites should be looked at, albeit an experiment of sorts, in the same context. 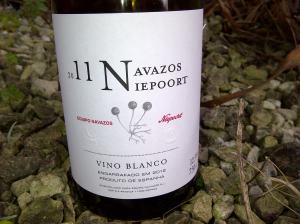 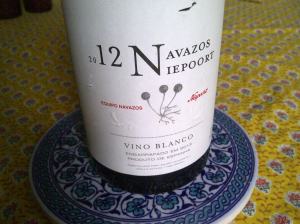 Writing here and elsewhere mainly about the outer reaches of the wine universe and the availability of wonderful, characterful, wines from all over the globe. Very wide interests but a soft spot for Jura, Austria and Champagne, with a general preference for low intervention in vineyard and winery. Other passions include music (equally wide tastes) and travel. Co-organiser of the Oddities wine lunches.
View all posts by dccrossley →
This entry was posted in Fine Wine, Sherry, Wine, Wine Agencies and tagged Equipo Navazos, Florpower, Jerez, Navazos-Niepoort, Palomino, Sanlucar Palomino, Sherry, Wine. Bookmark the permalink.

2 Responses to The Power of Flor