Pale with a refined bead, very elegant and fresh. The 70% Pinot Noir is accompanied by 30% very mineral Chardonnay, very refreshing and very dry (Extra-Brut with 0g/l dosage). A clear step up from the NV from this house we were served as an aperitif on arrival. Billecart can always be relied upon for a classy vintage and this was no exception, though it couldn’t match the next wine.

This is where we start to see some complexity, though this wine, released after the 2000 version, still has a way to develop. 40% Cotes Chardonnay is matched with 60%  Montagne Pinot. There’s a broadness to this later disgorged wine, and once more we also get a mineral freshness. I’m not sure I’ve ever had a disappointing FB.

I have to admit a particular liking for this single vineyard wine, named after the Chateau Pierre Taittinger bought just south of Epernay after the war. It’s always a clean, precise wine, well balanced, and I find it works well with food. It’s always a blend of a little more Pinot Noir than Chardonnay, say 55/45, from the 8ha Clos. It was my vote for best value wine of the night (though the Pol 2004 won the vote for best value and with both wines retailing for around £50 it’s a matter of which style you like best). It’s the wine I think that gets overlooked in the Taittinger range, so worth exploring.

Don’t be put off by what some may call a lesser vintage. Comtes has been on fire of late and the 2005 is particularly impressive. It’s a Blanc de Blancs and has that softly complex nose and a tell-tale floral “Comtes” burst but the fruit is totally integrated on the palate. The wine is blessed with great length. I’ve been coming to see Comtes as one of my favourite Champagnes but this was my first taste of the 2005. Not disappointed! And it’s not unheard of to be able to source these with a little discount from time to time.

Both Pols tonight were of a noticeably darker hue, ironic in that they see not a splinter of oak, but they are all hand riddled with a slow secondary fermentation. Despite the colour, the 04 was fresh and already showing a biscuity complexity from the 40% Cotes de Blancs Chardonnay, matched with 60% Pinot from the Montagne. To say Pol 04 is a very classy Champagne is probably an under statement.

We were very lucky to have the last bottles remaining unsold in the UK of the 2000 vintage of Winston. Another darker wine, the very powerful nose strikes immediately. Although technical data is hard to come by for this cuvée, it is probably around 70% Pinot from very old vines (they say planted in Churchill’s lifetime). They produce a full-bodied wine with great vinosity. Should I be sheepish in saying that I know this 2000 goes remarkably well with fish & chips…?

This is another wine I buy when I can and the 2004 of the vintage Blanc de Blancs has proved a delicious wine without the need for great bottle age (though it still has a life ahead of it). This is no doubt down to eight years on lees and a “light” dosage which gives it a delicious creamy brioche note and reminds me why I’m such a BdeB fan. Having the same winemaking team as Salon might help!

Salon may be a legend but I have to admit this is my first ever taste of it. The 38th vintage of this BdeB (it’s only made in good years) was released this year, and it comes from the Jardin de Salon and nineteen other small parcels selected around Le Mesnil. Very hard to read, it shows beautifully already on the nose, but no one would pretend the quincy palate stunned the audience. My reading, based on experience of other long-lived Champagnes, is that this was clearly down to youth, and Salon is one of a handful of Champagnes demanding long keeping. But others were not so impressed, with comments about it dropping away with no great length. I’m pretty sure that in the fullness of time it will prove the critics wrong, but then I’m not claiming vast experience here. I clearly need to sit down with a bottle to do some detailed research…if Salon would like to help me out here.

Any visitor to Epernay will probably have seen the bronze statue of the Dom outside Moet’s large premises, and will know the stories (some accurate, some less so) about his great influence on the wines of the region. Many will also have tasted this iconic prestige cuvée (a lot of it is made). And although some may quibble at its price, and sometimes with the odd vintage, it remains remarkable in so many ways. It’s always a Pinot Noir-Chardonnay blend with a lowish dosage now, which makes it dry but not too dry. It often drinks remarkably well when young, and for me the 2004 is no exception. The grapefruity freshness sees to that, but the toasty signs of complexity are there too. It clearly has a long life ahead in terms of development, but is it a terrible thing to call it gluggable…in the best sense?

The “Plenitude” concept replaces Oenotheque, of which the original “P1” version of the 1998 was labelled. So P2 is the second cycle of this wine’s life, disgorged to illustrate different aspects and facets of its character, as P3 will, in the future.

P2 had twelve years of lees ageing and was released May 2014. It’s already complex on the lovely, lifted, nose, but yet remains classic DP. It’s a singular, delicious yet in some ways formidable wine. Jane Parkinson (above) described it as “liquid baklava” with honey, nuts and pastry. That matches the palate, yet the unique nose has something tropical about it (or was that the staff member wearing quite strong perfume who walked past me at that point?). Anyway, it was my Wine of the Night, and that of more than 50% of the audience, a clear winner and a total treat on which to finish. 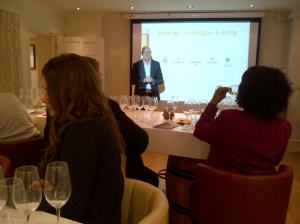 As Tom said in his summing up (above), a really fantastic tasting which even the experts found highly stimulating. No disappointing wines, all worthy of recommendation. Although the outlay for tickets for these events may not be insubstantial, compared to other prestige wine events, they remain very good value, and I’m pretty sure from the comments I heard that the other attendees would agree (though I have no idea what they got in their (served blind) goody bags, chortle).

Writing here and elsewhere mainly about the outer reaches of the wine universe and the availability of wonderful, characterful, wines from all over the globe. Very wide interests but a soft spot for Jura, Austria and Champagne, with a general preference for low intervention in vineyard and winery. Other passions include music (equally wide tastes) and travel. Co-organiser of the Oddities wine lunches.
View all posts by dccrossley →
This entry was posted in Champagne, Wine, Wine Tastings and tagged Antique Wine Company, Billecart-Salmon, Champagne Events, Delamotte, Dom Pérignon, Pol Roger, Prestige Champagne, Salon, Taittinger, Ultimate Champagne Evening, Wine Gang. Bookmark the permalink.