Just an average day for me in London, you will note, passing Il Camisa for a bottle of Barolo, en route to Foyles to buy Kerin O’Keefe’s book on a similar subject. Then a saunter down to Farringdon Street to see whether I can see a familiar face, not John who runs Winemakers’ Club in this case but the rather singular labels on Gut Oggau’s wines (the face below is that of Winifred, a pink Osterreichischer Landwein, and the only one of Gut’s wines John currently has on the shelf).

I do wish I got over to Winemakers’ Club more often. It’s excitement lies partly in the excellent range of wines erring towards the natural persuasion, and to the fact that it’s the one wine shop where many of the wines which I have yet to buy come from winemakers whose names I often don’t know how to pronounce. That signifies adventure and discoveries to be made.

Anyone venturing into the eerie space underneath Holborn Viaduct might remember it as an Oddbins Fine Wine store decades ago, and the very place introduced me to some very good wines way back then (Sean Thackrey springs immediately to mind), so it’s good to see it reborn in this way. I’d pretty much try any wine they sell, but do ask about Hungarians, Aostans, Vinochisti and Australian winemakers whose first name is Tom. 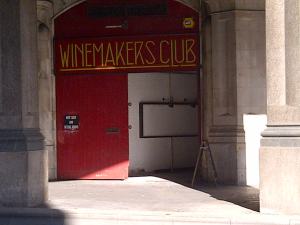 The object of the day was to end it at Quality Chop House, not far up Farringdon Road (which it inexplicably becomes, at some point no longer a street), there to taste my first ever Beaujolais from Julie Balagny. Balagny is a pupil of Yvon Métras, and is totally passionate about making the best wines possible from her three-or-so hectares of Fleurie. We drank the 2013 “en Rémont” and we had it decanted. I can say little more than it is possibly the most elegant, precise, Beaujolais wine I have ever had. On the lighter side, one might say, but still concentrated and with both a scent and structure that reminded me of Organdy, that fine cotton fabric from Turkmenistan whose open weave gives the impression of delicacy without undue lightness. Truly a lovely wine and potentially a new star in the region. That a friend had to lug this back from New York (she has no UK importer, we believe) is frustrating. By the way, anyone writing a book on Beaujolais? It must be one of the most exciting yet under the radar hotbeds of French wine these days? 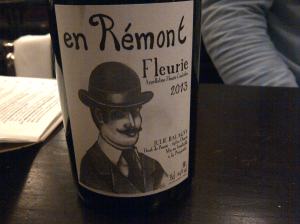 I must mention the wine we grabbed from the QCH Bin End List, from a producer I’d never heard of, J-C Garnier’s Roche Bézigon. It’s a Chenin with some skin maceration made over towards Layon. An almost dark gold colour, a touch of volatility but by no means on the way to cider, it was a nice wine and a nice choice. 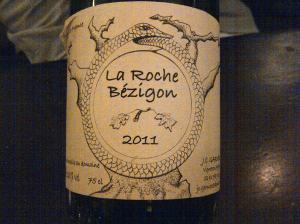 The food at Quality Chop House was excellent, including (for me) a starter of brown crab on toast and a Berkshire pork chop for main, accompanied by some rather tasty, if decadent, confit potatoes. London does seem to have rather a lot of very good restaurants these days, but QCH is one to return to. The main dining room has that authentic feel of old London, well I don’t mean the Dr Johnson “Ye Olde” of the Cheshire Cheese, but of jellied eels and great meat (being a quick dash from Smithfield). In fact QCH has its own butchers/food shop next door, and the quality of the pork was excellent. Indeed, we were well set up for the now inevitable delays on the train home.

Writing here and elsewhere mainly about the outer reaches of the wine universe and the availability of wonderful, characterful, wines from all over the globe. Very wide interests but a soft spot for Jura, Austria and Champagne, with a general preference for low intervention in vineyard and winery. Other passions include music (equally wide tastes) and travel. Co-organiser of the Oddities wine lunches.
View all posts by dccrossley →
This entry was posted in Dining, Wine and tagged Austrian Wine, Beaujolais, Fleurie, Gut Oggau, Julie Balagny, Quality Chop House, Winemakers Club. Bookmark the permalink.