The Secret Garden and The Pig

Tim Phillips isn’t a name many of you will have come across. Tim has several winemaking strings to his bow, with projects in South Africa and in Italy, but Tim’s current focus is very different. Clos du Paradis is not in France, but on the South Coast of England. It’s a two-hundred year old walled garden in Hampshire, once belonging to a country house, but long neglected.

When Tim purchased the site (for around a tenth of the original asking price) in 2007 it took him two weeks of bramble clearing to get from front to back. In doing so, he uncovered a greenhouse (of which, more later) and a large well, and in the process restored a Victorian microclimate sheltered from the wind, well drained (on a bank of gravel 80cm below the topsoil, not the usual Southern Counties chalk), and warm enough, due to the heat retention of the red brick walls, to ripen Chardonnay, Sauvignon Blanc and Riesling. From these three varieties Tim began making very limited quantities of organic wines in 2008, using “natural wine” cellar processes.

Tim Phillips studied winemaking at Elsenburg, near Stellenbosch, between 2002 and 2004, and he’s been making wine in South Africa since 2006, currently in the Upper Hemel-en-Aarde at Spookfontein. I first met Tim at a Castagna Tasting a few years ago – the Julian Castagna connection comes from him working a vintage there in 2005. The Italian connection comes through meeting Tom Shobbrook, via Julian Castagna, and visiting him in Tuscany, and thereby getting to know Sean O’Callaghan, then at Riecine. This has in turn led to Tim starting up his own Italian project. Everyone and everything seems interconnected these days. Riecine was such a hub of creative winemaking when Sean was there.

When I first met Tim at that Tasting with Julian Castagna he was offering his English wines through a leaseholder system, whereby members of the scheme paid money upfront for bottles. This got round excise issues, because with an initial production of just a few hundred bottles per vintage the costs associated with actually selling the wine were prohibitive.

My visit to “Clos du Paradis” this week coincides with Tim’s registration with the duty and excise authorities, and from October he should be in a position to market and sell the wine. Not that I expect him to have any problems selling it. He has at least one local wine shop clamouring for bottles, one natural wine bar in London which has put in a request, …and me! He’s also exhibited at RAW in London, the Natural Wine Fair Isabelle Legeron MW organises.

The vines in the “Clos” are generally trained with good ground clearance on a fairly high trellis, although later plantings have been lowered a little. The grapes look very healthy, with just a touch of downy mildew at the top of the canopy in one or two places (the result of spraying too low). The preps Tim uses are just sulphur (small quantities), equisetum (horsetail), nettles and willow bark. He also uses salicylic acid spray (a bio prep also, oddly, used in topical anti-acne medicines, but which Tim says is very good in treating mildew), and quartz silica, which aids stabilisation of plant metabolism. He eschews the use of copper. 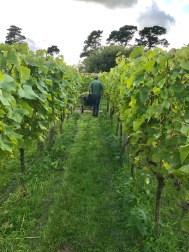 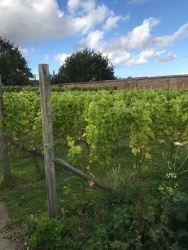 Tim has also purchased an adjoining field, which is his next project. He has a very old apple tree in the vineyard and the field has unearthed several more. His latest venture is sparkling cider, which will add another much needed revenue stream, and he’s already putting tea plants by the wall in the vineyard, with more planned for the walled part of the field. That’s an interesting idea for diversification. 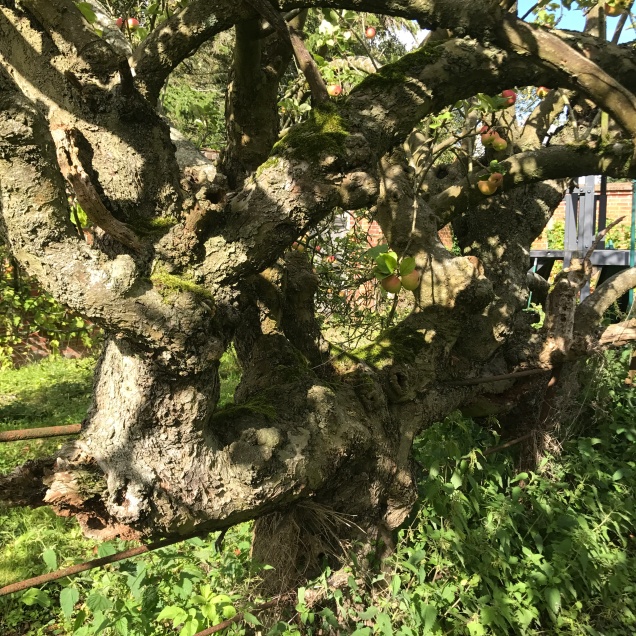 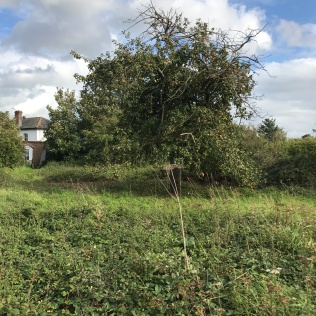 I mentioned the greenhouse. This long, sunken, building is, as Tim discovered, positioned perfectly so that even in mid winter it avoids the shadow of the nearby house by just a couple of centimetres. Its current use is twofold. First, it’s a perfect place in which to bring on new vines, all propagated from his own stock by way of massal selection. But it’s also a perfect place to fully ripen a large Chardonnay vine. This is the source of the liqueur for the second fermentation of his classic method Riesling.

Tim’s winery is a few minutes’ drive down the road. It’s pretty small, a converted shed with a new roof for making the wine in, and another outbuilding for storage and an office (the storage ranges from Tim’s red Ducati to a nice vertical of empty Chateau Latour). Next to the winery is an enormous pond, excavated by Tim, all surrounded by mature trees to create a nice secluded working environment. Everything is fairly small scale, to match the small production, although Tim recently splashed a few thousand Euros on a spanking new basket press to replace the much smaller, older, model. 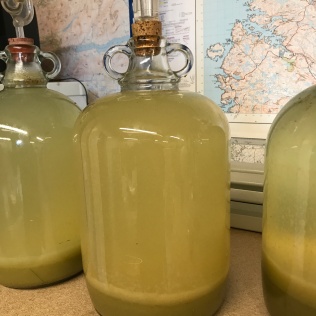 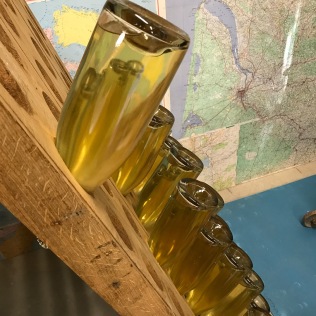 The bonbons/demi-johns contain Chardonnay for the sparkling wine dosage.

We were able to try three wines. The first was a bottle of the sparkling Riesling, not yet dosed. There were four of us tasting, three being wine professionals, and we thought it was great. This bottle was one held back from a batch which is currently at Wiston Estate for disgorging and dosing. Dosage will be around 6g/l. I can see the logic, but without dosage this was fresh and a little floral, and with no more acidity than a wine connoisseur could cope with. Unanimously declared delicious. I really look forward to trying the finished product (I’ve put in my request), but current production amounts to 135 bottles per vintage. And with Tim being a big fan of magnums, that’s even fewer units. 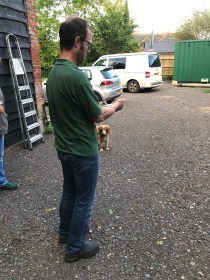 There was no Chardonnay to try, but we did get to taste a couple of vintages of the Sauvignon Blanc. These are bottled in 50cl format, which is a nice idea. The 2014 had a week on skins, was quite ripe and even a touch fat. A very interesting wine, much much riper than you would expect from English Sauvignon Blanc, not that I recall ever trying one before. The 2011 was quite developed. The fruit side blends flavours and aromas of greengage, apple and gooseberry with a touch of Sherry on the finish, this latter touch not in the least bit off-putting, although it is possibly past its prime. 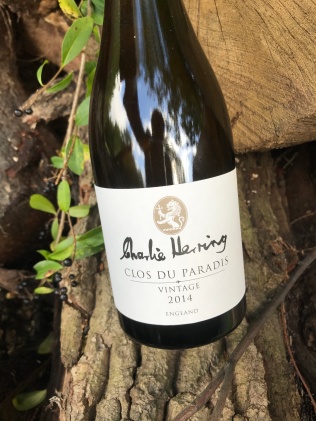 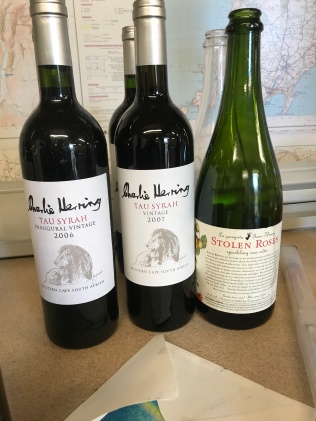 The 2014 Sauvignon Blanc, and a couple of Tim’s South African wines with something I’m sure we all recognise from La Garagista in Vermont

With so little wine made you might be wondering why I’m writing about this “Clos du Paradis” venture? Well, aside from the fact that it is an interesting project and a beautiful vineyard, and you can’t deny that it does look rather attractive in the photos, I have a hunch that we might be hearing a lot more about Tim Phillips’ English venture some time soon. You might also see his wine in a natural wine bar in London before the year is out. What is this Blog for if not to make sure you hear about things before anyone else? The wines won’t stick around long.

And what of the Pig? Recently I’ve been writing about the New Forest as a culinary destination, with trips to half a dozen local restaurants. The place I’d not yet visited was The Pig, just outside Brockenhurst and not far, in fact, from Lime Wood, which we visited a month or so ago.

Set among beautiful grounds, The Pig is a small country house hotel, not as large (or smart) as Lime Wood, but hardly less attractive. One of five “pigs” in the group (two in Hampshire, one each in Dorset, Somerset and Devon), this one has thirty bedrooms and a very popular, packed on a Wednesday, restaurant. The food is pretty much all sourced locally and is highly recommended. We gathered in the very attractive bar for a bottle of Hambledon Première Cuvée and substantial and superior appetizers, moving into the restaurant for, in my case, cod cheeks and belly pork (although the pigeon two of the party ate looked really good).

We were treated to a bottle brought along by friends of Sadie Family “Skerpioen” 2015, a field blend of Palomino and Chenin Blanc from vines over 50 years old, fermented in concrete egg. Lovely floral nose with lots of salinity and very long, this is yet another classy Sadie wine which will go on for years. My first time drinking this. From the list I ordered Phillippe Farinelli’s Corsican red Corse Sartène 2015, Domaine Saparale, which showcases Corsica’s Sciacarello variety blended with Nielluccio, Corsica’s home grown variant on Sangiovese.

The wine is perfumed with smooth darkish fruit and medium weight. It’s a nice, characterful introduction to Corsican wine from one of the island’s best independent wine estates. It is in fact rather a bargain retail (Yapp Bros in Mere imports Domaine Saparale), at a little over £16. The only issue I have is that it appears on the wine list here at £47. In fact I was tempted to order a Jasper Hill Georgia’s Paddock Shiraz (retail £46.25 from Yapp) but at £104 on the list it seemed just a bit over priced. But to be fair the food, by way of contrast, is reasonably priced. It’s just a pity that real wine lovers have to subsidise those who will happily go for some of the cheaper wines on the list.

But that’s a minor, and ongoing, moan. The food was very good, as was the service (if a little inexperienced at times it was nevertheless always courteous and enthusiastic). We moved outdoors after dinner, to sit by a log fire, sipping a Sepp Moser Pinot Blanc tba 2015 from Burgenland, and a variety of digestifs. A perfect ending to a really relaxing evening. The Pig really is a wonderfully laid back place to dine, with a very nice vibe and welcoming staff. I’m really looking forward to going back. Soon, I hope! 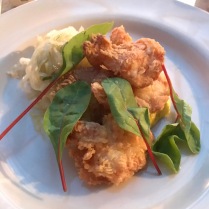 2 Responses to The Secret Garden and The Pig