Senorans at The Shipyard

I was back at Lymington’s wonderful Shipyard Restaurant last week for a dinner with Javier Izurieta, Export Director of Pazo Senorans. The Shipyard is getting a reputation for wine, and in fact they have a tasty looking event on 4 May with Olivia Barry (Jim Barry, Clare Valley), which will doubtless include a taste of their much anticipated Aussie Assyrtiko, the first one from down under.

The Shipyard is a few minutes away from Lymingtom Quay, within the famous Berthon Boatyard. Close to Lymington Harbour, on the Lymington River, they are attached to The Fish Market, purveyors of fresh fish of real quality, which also supplies the restaurant. The Shipyard put together a Galician menu featuring octopus with padron peppers and chorizo, roasted cod fillet with olives and patatas bravas, and a wonderfully executed Tarta de Santiago, with a home fashioned stencil for the traditional icing sugar topping. A wonderful meal is guaranteed here, and the people are unimaginably friendly (and more than happily compliant with any special dietary requirements). 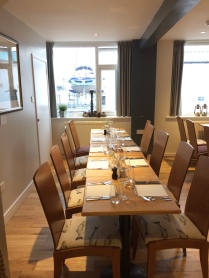 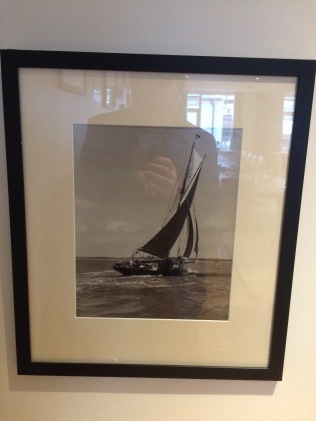 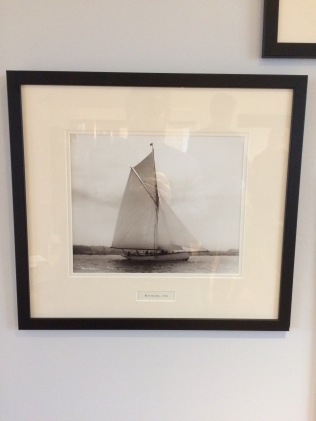 Pazo Senorans is acknowledged as one of the very top producers in Galicia, some would say the top producer. They have a very simple mission – to produce the finest Albariño in the world. They do this in one of the most beautiful, rugged, parts of Spain. The landscape is granite, very Celtic, and topsoils are poor and thin. Formed largely of this decomposed granite, they are also very acidic. The antithesis of our idea of the Spanish climate, it is a green land, washed by Atlantic winds and waves of rain which swirl down the Bay of Biscay. It was one of Europe’s poorest regions up until the end of the 20th Century.

Winemaking is not complicated at Pazo Senorans. They eschew oak as they believe it masks the Albariño grape variety, but they are great believers in using the lees, which Javier passionately told us bring “life” to the wine. The Bodega is in the historic town of Pontevedra, at the head of the Ría of the same name. The town is the provincial capital, allegedly founded by the Greeks, and has a wealth of arcaded houses with glazed balconies, along with a host of architecturally interesting religious buildings, and a Templar castle (I passed through very briefly a long time ago). 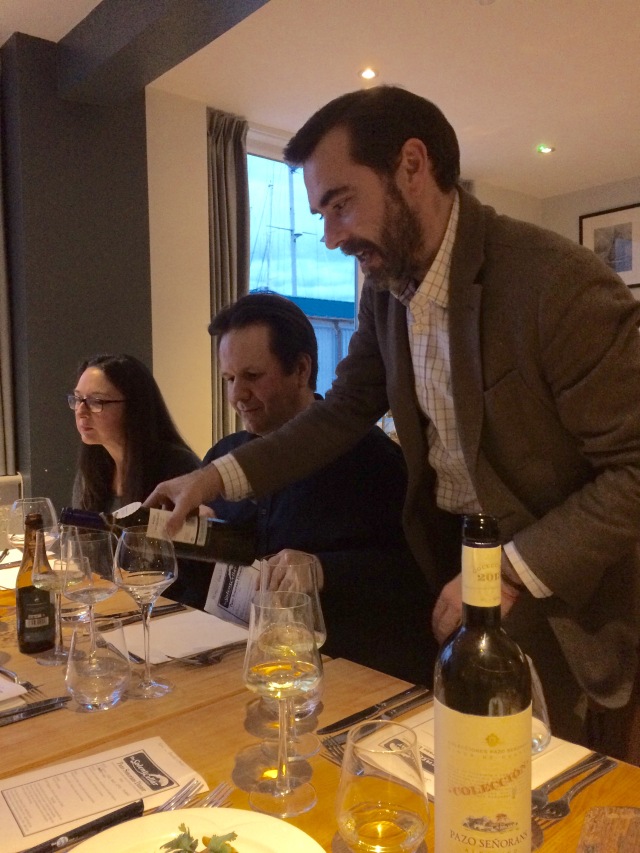 We tasted the entry level Albariño 2015, the Pazo Senorans Colección 2013 and 2009, and their complex Selección de Añadas from 2008 and 2007 in bottle. We finished dinner with the Añada from 2006 in magnum. These bottles range in price from around £17 for the current vintage to around £23 and £40 respectively for the two more expensive cuvées (only available from the domaine, or perhaps speak to their UK agent, Alliance Wine). The Tasting was organised through Solent Cellar, Lymington’s classy wine shop, who (if you are swift) may be able to source some of the wines for you.

Pazo Senorans Albariño 2015 is the current vintage of Senorans’ standard release. It’s no mere “standard” wine though, fresh and delicious with genuine character. It’s amazing value, and drinking now, but it really will age and improve, perhaps over three more years. 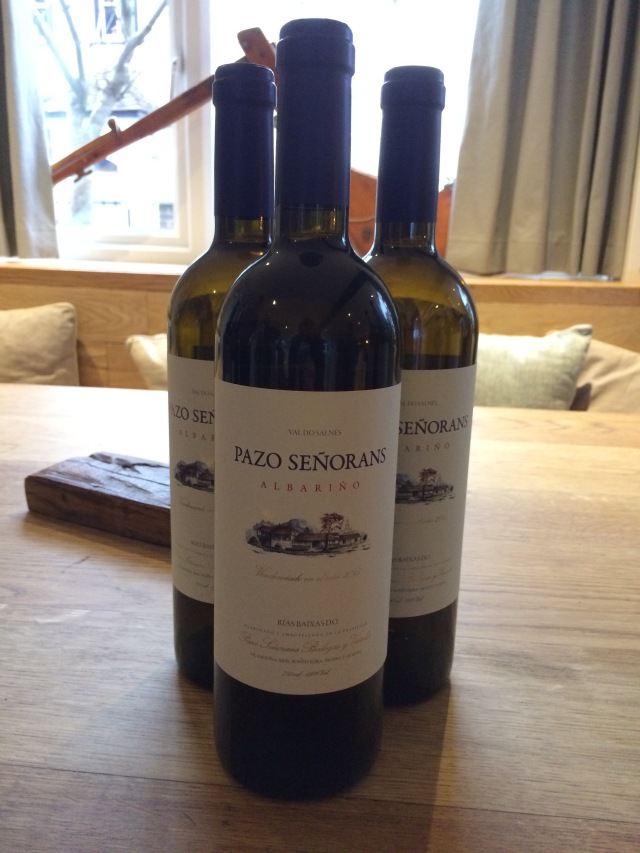 Pazo Senorans is all about proving the ageability of the Albariño grape variety. The Colleccíon 2013 clearly has greater depth. It has an extra herby character and superior length as well. If it is available, it’s only a relatively small step up in price over the straight 2015. The 2009 Colleccíon has a beautiful nose, with a limey “sweetness”. The (bone dry) palate is still fresh, and there’s more clean acidity than you might expect. It’s a lovely wine. 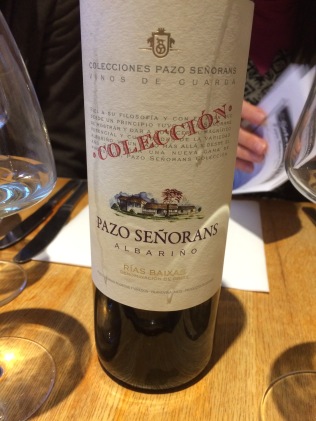 Añada is a big step up. The 2008 is surprisingly pale still. The nose is quite appley (one taster insisted Cox’s Orange Pippin). It has spent three years on lees before going back into small stainless steel tanks for a while before bottling, thereafter spending at least a year in bottle before release. There is genuine depth here and it’s hard to imagine any finer aged Albariño.

2007 seems to have a bit more dry extract than 2008, but it still shows that lovely rounded citrus freshness which is the hallmark of the Senorans wines, and a touch, almost, of the Riesling about it. It also has a mineral feel on the palate. The vintage variation is a positive for me. Naturally some people expressed a preference, but such variation just emphasises that these are wines of personality and character, not some industrial product with only a commercial imperative. 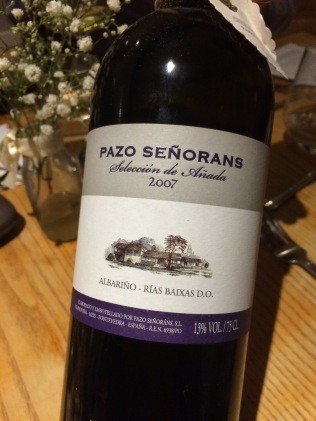 We finished on the 2006 Añada from magnum, an impressive wine for several reasons, not least in showing Albariño’s ability to age. More of that classic freshness and pale colour, green-gold, with great legs (glycerol), plus lees-induced texture. Proof, if proof were needed, not only of this producer’s position at the pinnacle of Albariño production, but also of this grape’s place as the queen of Spanish white varieties.

A few pictures of our dinner, below, will hopefully whet the Friday evening appetite. 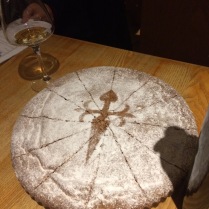 The Shipyard Bar and Kitchen is at Anchor House, Bath Road, Lymington, Hampshire: see web site here . Their website is very colourful and is well worth scrolling through.

Alliance Wines is the UK Agent/importer for Pazo Senorans.

Writing here and elsewhere mainly about the outer reaches of the wine universe and the availability of wonderful, characterful, wines from all over the globe. Very wide interests but a soft spot for Jura, Austria and Champagne, with a general preference for low intervention in vineyard and winery. Other passions include music (equally wide tastes) and travel. Co-organiser of the Oddities wine lunches.
View all posts by dccrossley →
This entry was posted in Spanish Wine, Wine, Wine and Food, Wine Tastings and tagged Albarino, Galician Wine, Javier Izurieta, Lymington Dining, Lymington Restaurants, Pazo Senorans, Rias Baixas Wine, Solent Cellar, Spanish Wine, Wine Dinner. Bookmark the permalink.

4 Responses to Senorans at The Shipyard