Children of the (Austrian Wine) Revolution

Newcomer Wines is a fixture of London’s  Shoreditch Boxpark, a wonderful retail concept with units sitting inside shipping containers next to Shoreditch overground rail station. The name doesn’t give much away, does it? Newcomer is actually an Austrian Wine specialist, and their Twitter handle and web site proclaims a far more useful description of their purpose – Austrian Wine Revolution (@austrianwinerev). 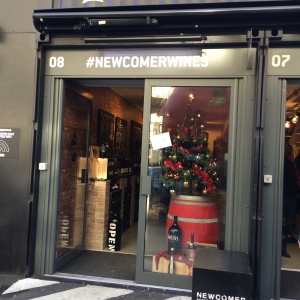 Like the French regions of Beaujolais and Jura, like the so-called “New” California and South Africa, and like Australia’s “Future Makers“, Austria has a bunch of new and younger wine producers who are punching a name for themselves. Some make natural, non-intervention wines, some are reviving old vineyards and varieties. Newcomer themselves call them progressive wine makers.

One facet of the Newcomer experience is their strong engagement with their supplier producers. They have frequent events at which their producers are present, either for mere tastings or for more ambitious events pairing wine with music (and I don’t mean Viennese waltzes!) which just emphasise their desire to engage with their customers, as well as create a new customer base away from the traditional (see their web site, events tomorrow and 17th December coming up).

There’s no doubt that Austria is one of the most exciting wine countries to visit right now. Just as the wider drinking public seems to be getting to know Austria’s established stars, there’s a whole bunch of new names to explore, and whilst Newcomer don’t have everyone (like personal favourites Gut Oggau and Heidi Schröck), they are the perfect place to start.

Someone suggested to me that retailing wine inside a shipping container is a bad idea from a temperature control perspective. But the unit itself, with its brick lining, never has the feel of a shipping container, and has never seemed especially hot, even in summer. If I had an initial criticism it was that there just didn’t seem to be all that many producers’ wines for sale. Yet pretty much every time I try a wine from one of them I decide I want to try more from the same source. 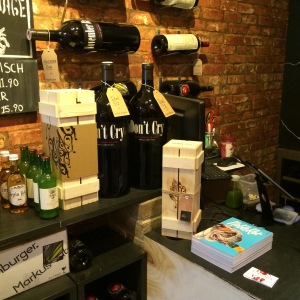 The perfect example is Claus Preisinger. I bought a bottle of his entry level Zweigelt for around £12. For its (somewhat unfashionable) grape variety and price this was so good I had no hesitation in grabbing his £40 skin contact Weissburgunder, along with some more of my original purchase.

The interior of their retail unit (I know, but it’s hard to call it a shop) exudes the sort of modernity you expect from Austrians, despite its tiny size. Technology, from i-Pads to a larger screen, allows the browser to access domaine information, along with pretty, atmospheric, photos of winemakers going about their jobs amid idyllic scenery – in other words a marketing man’s dream. Newcomer proclaim that what’s important is the story behind the wines. So long as the wines taste good, I think they’re right. The story is far more interesting, whether you’re a novice or a wine geek, than a reeled-off lists of fruits and spices. 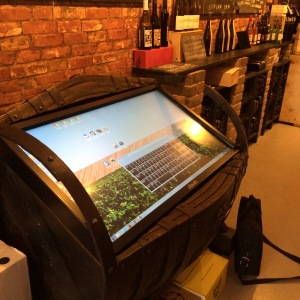 The atmosphere is softened, though, by the brickwork, and by the chalk board prices on the walls. And by the bottles. I was worried on my first couple of visits that possibly the main criteria for inclusion on their list was having a funky label. But by now we all know that young growers today see an interesting label design as integral to communicating their message. And let’s face it, with a few exceptions like the wonderful labels of Emmerich Knoll, those labels of the stars of Austrian wine are a little dull (and even Knoll’s are, by their subject matter, conservative). Generally, whilst I’m not going to claim the wines at Newcomer attain the heights of Prager and Hirtzberger at their very best, I think that on most occasions the labels convey the excitement of the wines.

A quick zip around what I think is worth exploring might be useful at this point. But I’ve by no means sampled everything, and if you do visit Newcomer I’m pretty sure that you’ll discover something I’ve not yet purchased. Here are a few ideas:

Groszer Wein – Markus Bach and Mathias Krön  have 16 hectares in Sudbürgenland. They put everything in 1 litre bottles, supposedly the traditional size used forty years ago in Austria. We had some of their Blaufränkisch for a Christmas meal last year and it was lovely, but all their wines are great fun to drink and equally good value.

Claus Preisinger – The guy I mentioned above, who farms assorted parcels around the Neusiedlersee and works out of Gols. His Zweigelt might be the best value wine Newcomer sell. Drink it as you would a fresh Beaujolais or a Touraine red from one of the young natural wine talents. His more expensive offerings are well thought out and serious kit. 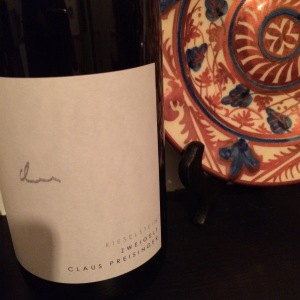 Christian Tschida – Hans and Lisa Tschida are, in Angerhof Tschida,  one of the most famous names in Ilmitz, on the eastern side of the Neusiedlersee, so don’t get confusing them with Christian. He only ranks two (not five) crowns in the Austrian Wine Guide, Vinaria, but Christian is somewhat more avant-garde. No shop-fronted tasting room for him, just a small sign which actively discourages anyone who might keep him from the vines. He fashions mysterious, non-intervention wines which defy the pigeon hole. They are also relatively expensive, like the other Tschida’s. Go on an adventure. The above link is suitably sparse. 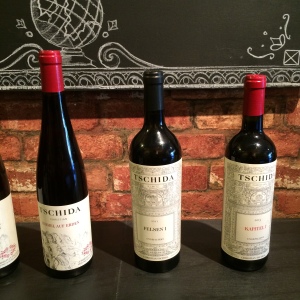 Jutta Ambrositsch – Jutta makes single vineyard wines from some of the most interesting vineyards in Austria. Not only do they look down proudly on the city of Vienna, but some of them consist of the historic field blends which produce Gemischter Satz. This is another passionate winemaker with strong views on farming and winemaking, and it’s her Sieveringer Ringelspiel Gemischter Satz I’d recommend as an introduction. Freshness like few achieve.

Davis Weszeli – Davis joined forces with the Langenlois wine family, Summerer (now headed by Rupert), to make a range of single vineyard wines under the Weszeli Terrafactum label which, like all those above, shows due respect to the environment in all aspects of farming and production. The wines are all terroir specific, from the village level Kamptal Riesling to the more expensive single vineyard Grüner Veltliners. My recommendation – the Käferberg Reserve, a sort of Premier Cru. But tuck it away. If they have any on taste, you’ll see why.

That’s just a selection. I’ve also enjoyed wines from Markus Altenberger, Christoph Edelbauer and others. I’ve yet to pluck up courage to grab a bottle with the oddest wine label I’ve ever seen (for fear of disappointment at a marketing gimmick), Erwin Poller’s “Vom Loess“. If you follow that link you’ll see what I mean! (It’s not shocking).

I will say that Newcomer’s web site doesn’t really give the full idea of what they are trying to do in Shoreditch, and some of the language does come over as marketing that has slightly missed the mark (of “Rotten”, they say “…an extraordinary blend that punks and those in the know will love. Those with their noses in the air will miss this baby by a mile”!). Don’t be put off. I do strongly recommend checking out the bricks and mortar if you are close enough to visit. It’s suitably close to Rochelle Canteen. You get a much better idea of what they are about.

Writing here and elsewhere mainly about the outer reaches of the wine universe and the availability of wonderful, characterful, wines from all over the globe. Very wide interests but a soft spot for Jura, Austria and Champagne, with a general preference for low intervention in vineyard and winery. Other passions include music (equally wide tastes) and travel. Co-organiser of the Oddities wine lunches.
View all posts by dccrossley →
This entry was posted in Austria, Austrian Wine, Wine, Wine Heroes and tagged Austrian Wine, Christian Tschida, Davis Weszeli, Erwin Poller, Groszer Wein. Claus Preisinger, Jutta Ambrositsch, Newcomer Wines, Shoreditch Boxpark, Weszeli Terrafactum, Wiener Gemischter Satz. Bookmark the permalink.

2 Responses to Children of the (Austrian Wine) Revolution