I rarely write about the wines I drink at home, but in light of the last post, and the one on the Oddities lunch, I thought it might interest or amuse some readers. For some people who I know read this blog it will just seem like the normal run of midweek wines. To others, it may merely confirm me as a lost cause. The following were drunk over the past week-and-a-bit.

Two Swiss wines is unusual, even for me. I love Swiss wines and drink them whenever I can (Alpine Wines is a really good source for UK mail order/online sales). But we were lucky that Swiss friends came to stay recently, generously lugging half-a-dozen bottles in their suitcase (which they replaced on the way back with British beer).

Humagne Rouge du Valais 2014, Lamon & Cie was on paper a cheapish negoce version of a lovely Swiss grape variety capable of quite serious wines on occasion. 13.2% alcohol here (the Swiss tend to go for accuracy), the cherry colour of Gamay, it was both simple and rustic, but in a good way. Smooth on the palate but with a nice bitter finish, it was an excellent glugger. That’s what you want on a dull Tuesday night in October. 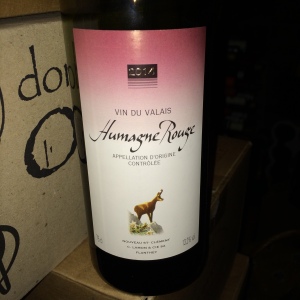 Lavaux “Coup de L’Etrier” 2014, Jean & Pierre Testuz looked of a similar type. I’ve enjoyed Testuz wines before and this came in a light bottle with a none too elegant, somewhat old fashioned, label. Yet the wine was delicious. The slopes of Lavaux, and the Crus clinging to steep terraces down to the lake between Montreux and Lausanne, are a UNESCO listed World Heritage Site, and vie for the title of the most beautiful vineyards in Europe. Their wines, however, are not so highly regarded outside Switzerland. In my opinion this is unfair. Chasselas is capable, from these sites, of both flavour and tension, with a sprinkling of carbon dioxide to add a prickly freshness. Citrus and straw with a good touch of quince on the finish. A wine of personality. As I’d not had a Lavaux wine for a good twelve months, my pleasure was all the more pronounced. Not a “fine wine”, but lovely nevertheless. 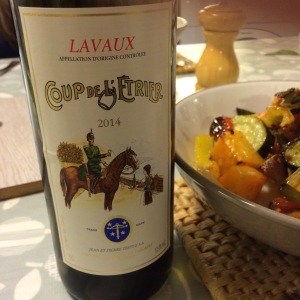 Beaujolais 2011, Yvon Métras . A producer who needs little introduction, one of the legends of Beaujolais. But in the UK at least, it’s about ten times easier to find Foillard than Métras. This wine looks more like a Burgundian Pinot Noir than Gamay, yet it has a lovely, concentrated, cherry nose bursting from the glass. Note the vintage. The wine (labelled Beaujolais but effectively a “Villages”) is in perfect harmony. This is another wine where the savoury twist on the finish completes a palate which is otherwise pure smooth fruit. Is it serious stuff, good fun, or both? The latter, I think. It suggests there’s no hurry to open any younger bottles…if you can resist them. Masterfully made yet for enjoyment, not intellectual contemplation. 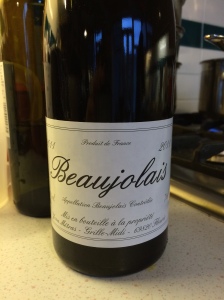 Muscadet de Sèvre et Maine Sur Lie “Cuvée Excellence” 1999, Château du Coing de St-Fiacre . How can this be so good, 1999 Muscadet? There are a few people for whom this is a really stupid question. They have tried the likes of Luneau-Papin’s L D’or bottlings many times. This wine is yellow-gold. The nose is quite suggestive of Riesling, Chenin, and perhaps a little white Rioja. There’s citrus, nougat and curry spice in here, and the palate finishes its mineral journey with a little touch of orange. I only bought this bottle (and one which preceded it) a year ago in London, after someone brought one to one of our Oddities lunches. A treasure as much as any supposedly finer old bottle. These older Muscadets are well worth looking for, and they can still be found at Loire specialists. Complete bargains. 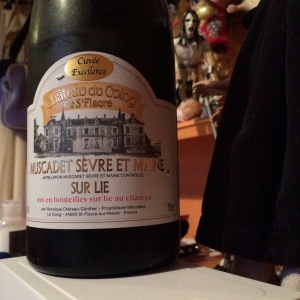 Blaufränkisch “Hochäcker” 2009, Mittelburgenland DAC, Weninger . Weninger, not to be confused with the similarly named Vienna producer, is one of the best producers of Blaufränkisch in Middle Burgenland. I’ve become a big fan of this grape over the past few years. When done well it seems to have the fruitiness of a grape like Gamay with additional savoury depth. This isn’t one of Weninger’s more expensive wines, yet a few years in bottle shows how the grape can develop. There’s characteristic pepper, and brambly fruit, still quite crunchy, but an added leafy complexity. It’s nicely balanced at 13% alcohol. Really hitting its stride. Austria is one of a handful of the most exciting places for wine in Europe at the moment, yet this is not a new producer, nor a new wave wine. Weninger has distilled the best out of Blaufränkisch without trying to make a souped-up oak bomb. 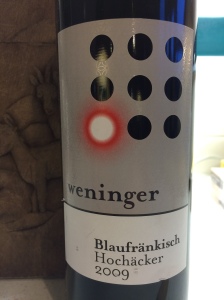 Le Vin des Amis 2014, Vin de France, Mas Coutelou . Jeff Coutelou makes some of the most exciting natural wines in the Languedoc at Puimisson, just north of Béziers. Every different cuvée is really well thought out and lavished with individual attention. Whilst I love his more expensive wines (at least those I’ve tried), the Vin des Amis must be one of the most satisfying wines I’ve drunk this year (2013 and 2014 vintages). Purple, with intense berry fruit, it has a beguiling freshness and even lightness which conceals its 13.5% alcohol. It’s usually a blend of Syrah and Grenache with a good dollop of Cinsault (though I’m guessing there’s no set formula). As the name suggests, it’s not really meant for keeping, though I think a year or so will do no harm whatsoever. We drank this on the first night of winter – well, the day after we put the clocks back. As a wine for pure pleasure it’s exceptional. It is very much one of those wines Pascaline Lepeltier (see previous blog post) describes as a wine for drinking with friends. In essence what wine should be – simple but pure pleasure. Yeah, should’ve bought a case of the ’14. 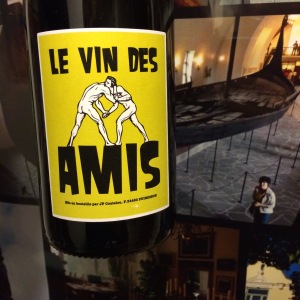 **The Coutelou wines are available from Roberson. Weninger’s Hochäcker probably came (having aged it a bit myself) from Fortnum & Mason , though Alpine Wines (see below) stock Weninger. The Muscadet was from The Sampler. That 2011 vintage of the Métras was from Solent Cellar. I have bought the 2014 from Vintrepid. Métras may sometimes be available at Roberson. The Swiss wines are unavailable in the UK but Alpine Wines has these bases well covered. In fact, they are a really good source for, especially, Swiss and Austrian wines.

Writing here and elsewhere mainly about the outer reaches of the wine universe and the availability of wonderful, characterful, wines from all over the globe. Very wide interests but a soft spot for Jura, Austria and Champagne, with a general preference for low intervention in vineyard and winery. Other passions include music (equally wide tastes) and travel. Co-organiser of the Oddities wine lunches.
View all posts by dccrossley →
This entry was posted in Swiss Wine, Wine, Wine Tastings and tagged Alpine Wines, Beaujolais, Blaufränkisch, Coing de St Fiacre, Humagne, Jeff Coutelou, Lavaux, Mas Coutelou, Métras, Muscadet, Roberson, Solent Cellar, Swiss Wine, The Sampler, Vin des Amis, Vintrepid, Weninger. Bookmark the permalink.