My first visit to Fizz, the sparkling wine show put on at Church House within the precincts of Westminster Abbey, sponsored by Glass of Bubbly Magazine. It was nasty and wet yesterday and I had the beginnings of what has become an equally nasty cold, but it was worth dragging myself up to Victoria. I won’t pretend everything I tasted was good, indeed there were some disappointments, not least down to serving temperatures (way too cold in some cases) and bottle condition (too many pours from bottles devoid of bubbles), but equally I made some real discoveries. Excuse me sticking to those, there’s not enough time to moan about the others, though I’ve an idea that a couple of wines in particular were let down by the last of those gripes. 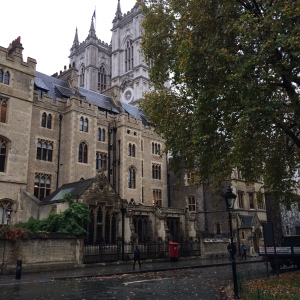 I wanted to hit the English producers – there were a good few on show. Four stood out from what I tasted. I know Bolney Estate very well – I can reach their winery and cellar door in 15 minutes from my home, and I’ve bought several of their wines from Waitrose, including a good few bottles of their still Pinot Noir, this year. I really do need to pay them a proper visit (not just their shop) and devote a separate piece to them. I’ll just mention two wines here.  The first was their new release Blanc de Blancs 2010. Great vintage, potentially great wine. It’s actually pretty good now, one of the best wines of the day, but it will surely grow in complexity.

I refused to pass up the opportunity to sip one of my favourite wines of their range, the red sparkling Cuvée Noir. This is a Dornfelder. Think dark brambly fruit with a bitter twist, yet fun and smooth with no rustic edges. I’ve taken this wine to several tastings and lunches and everyone loves it. No one guesses its source.

Bolney are probably a little bit in the shadow of the likes of Ridgeview and Nyetimber, unfairly in my view, yet their Pinot Gris has recently been served to First Class passengers by British Airways. Do seek them out, their top of the range wines, still and sparkling, in particular. And don’t forget to try the Cuvée Noir.

Hampshire’s Meon Valley is home to not one but two of the best English producers on show, but they make contrasting wines.  Meonhill was planted in 2004 by  Avize Champagne producer, Didier Pierson. The vineyard grows Pinot Noir and Chardonnay, and Didier showed his Grande Réserve NV (50:50 PN/Ch), Chardonnay NV and Rosé. The latter is a blend of 50% Ch, 35% PN plus 15% PN as a tank-aged red wine. The Reserve is mainly 2010 base with 2009 and 2008 reserves, whilst the Chardonnay is largely 2009. The key to the wines here is long lees ageing, five years approximately in bottle. The range is quite serious but not lacking freshness. Very good, nicely put together wines.

The wines of Exton Park are quite a contrast. They have 55 acres planted and first came to the market in 2011, the same vintage as Meonhill. I’ve not visited Exton but they do seem to be well funded. The key note in these wines is freshness. Indeed, they really knock you back and have instant appeal.

The Brut Reserve is 60:40 Ch/PN with just 15 months on lees. Cleansing citrus lemon freshness. The Blanc de Noirs (100% PN) is rounder in the mouth but still refreshing. A food wine. A rosé is made from 70% PN with 30% Meunier. It’s the opposite of the Meonhill, being made from gently pressed fruit to give its colour (a press lasting 5-7 hours under nitrogen). It gives it crunchy red fruits. 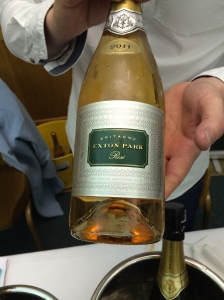 A 2011 Vintage wine is Exton’s first vintage release, just disgorged this March after longer lees ageing. As with the Bolney BdeB, it promises complexity. I was also able to taste a really interesting 2011 vintage pink. Originally winemaker Corinne Seely (of Coates & Seely fame) wanted to make a rosé for owner Malcolm Isaac’s birthday, but a stash was kept to see how it would age. The answer is very well indeed. It hasn’t been commercialised but I understand they will sell some of the 700 bottles they have at Exton Park if anyone is interested.

These are elegant wines with fruit and freshness, seeming to err towards a particular house style, but one which, within the context of quality, should bring wide commercial success. 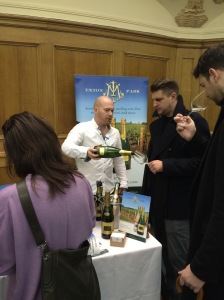 Last but not least among the English producers, Gusbourne. Although based in Appledore, Kent, Gusbourne owns vineyards across Kent and Sussex. This is increasingly seen as essential for the premium producers in this country, to mitigate frost or rain damage – oh the vagaries of the English summer! This is another producer whose still red Pinot Noir increasingly finds its way into my wine racks, but yesterday they were showing their Brut Reserve, 2010 BdeB and 2012 Rosé. These might be the best known of the English producers on show, and will need no introduction to many readers. But if you’ve not yet come across them, add them to your list.

Away from England I really enjoyed the specific Champagne of Henri Abelé which this Reims house produces from Les-Riceys fruit. The group of small villages called Les Riceys, along with vines in the nearby village of Avirey-Ligney, are two of the secrets of the  Côte des Bar sub-region now known as the Barséquenais. They provide some exquisite Pinot Noir fruit, and one or two very famous and exclusive Champagne Houses have contracts down here, though they don’t always trumpet the fact. Les Riceys is also home to another secret, the often hauntingly beautiful and long lived still wine, Rosé des Riceys. But with only fizz on show, this pink Aubois cuvée, “Le Sourire de Reims” was new to me, and on tasting yesterday looks like a wine I’ll seek out for closer examination.

It’s a single vineyard PN which undergoes a very short maceration (36-48 hours), and is then aged for at least ten years – I tasted the 2003. The wine is then not released until it has undergone a further six to 12 months’ post-disgorgement ageing. It has a lovely colour (see above), and real character and personality. Not for those who prefer bland anonymity in their pink Champagne, though.

One of my star finds was lurking on the Vintage Roots stand, the Franciacorta wines of Barone Pizzini. The “Animante” NV is a blend of 78% Ch, 18% PN and 4% Pinot Bianco. It was good but the “Satèn” cuvée was stunningly good, even initially when it was too cold, and as it warmed up it filled the glass with a brilliant nose and amplified complexity. (Satèn means the same as Blanc de Blancs in Franciacorta, and although Pinot Blanc is permitted, the Pizzini Satèn is 100% Chardonnay). The wine’s gentle bead is the result of another Satèn regulated characteristic – the wine is bottled with 4.5 atmospheres of pressure rather than the more usual 6.

I enjoyed the nice Rosato 2011 (100% Pinot Noir), but the Riserva “Bagnadore Pas Dose” 2008 was on a par with the Satèn, and I’m not sure which I liked best. The “Bagnadore” is a 50:50 split between Ch/PN, aged for six years. It’s probably more complex than the Satèn, both being impact wines which seemed to be garnering praise from not just me, but everyone else drawn to the table whilst I was there.

The Pizzini wines were actually recommended to me by Nik Darlington of Red Squirrel (regular readers probably saw my piece on the Red Squirrel portfolio tasting at Black’s Club in Soho a couple of weeks ago). It was good to have the chance to focus just on their sparkling wines, though I didn’t try bottles like their Nantais fizz (aka Sparkling Muscadet) that I already know, good as it is.

Ca’ di Rajo produce a really nice Prosecco Extra Dry by the charmat method of tank fermention usual for this DOC. But they also make a really interesting bottling called “Le Moss”. It’s an unfiltered, bottle fermented,  dosage free, frizzante. It has a very autolytic nose, more yeast influenced than fruity. It’s also quite unique on the palate. Whilst the straight Prosecco is the wine with commercial appeal, this “cloudy Prosecco” will appeal to the adventurous. Nik said he thought it’s almost “more like a craft beer than wine”. A great description, and when a lot of “natural wine” tastes a little like cider, even more fitting for an unusual wine which nevertheless does not.

Red Squirrel have a habit of getting me to try a brilliant wine and then telling me they only have four bottles left and I’ll have to wait for the next vintage. Luckily the 2014 vintage of the Vondeling Rurale Méthode Ancestrale Pétillant Naturel from Voor-Paardeberg, South Africa, is on its way. I think this is my first South African pét-nat, and it may even be a South African first. 100% granite-grown Chardonnay is fermented in tank and then transferred to bottle under crown cap, where the fermentation finishes. It has 12% alcohol, and is really “mineral”, clean and refreshing. Very good indeed.

I couldn’t refuse a sip of Red Squirrel’s Cava, Parxet’s Titiana, one of the absolute stars at the previous portfolio tasting. I also tried their good value Champagne, Gratiot-Delugny’s Brut Réserve. This is a Meunier-heavy wine with 20% PN, dosed at around 7-8g/l. Good value if you can find it around £25 retail. Also worth mentioning is the Jus de Raisin Pétillant, an alcohol free sparkling grape juice from Domaine du Landreau (Loire). Quite similar to an alcohol free version of Clairette de Die, quite a bit of sweetness but refreshing too.

Plenty more on show, such as the lovely Lambrusco Reggiano Concerto of Ermete Medici on the Vinumterra stand, and possibly more commercial offerings from Paul Mas, Fortant and Cono Sur, plus some wines I didn’t get round to, such as Louis Bouillot’s Crémants de Bourgogne. I’m also sorry I didn’t have time to visit the Bancroft Wines stand. But a good day’s tasting, and luckily the cold only really kicked in when another delay of 40 minutes on the train sapped my remaining energy. But who would complain after a day out drinking fizz! Not me. 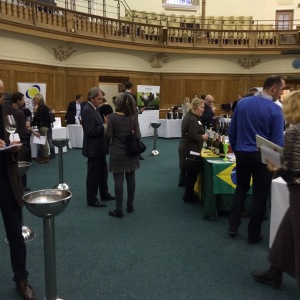 The hall, and, unexpectedly (only just spotted that), a major wine personality