Many wine lovers will have heard of Rust, a lovely old town on Austria’s Neusiedlersee, southeast of Vienna and bordering Hungary. If they don’t know it for its famous storks which swoop majestically over the town and breed on its chimneys, they will have heard of Ruster Ausbruch, its golden dessert wine made from nobly rotten grapes on the slopes above the shallow lake’s extensive reed beds. The next village to the north, they probably will not have heard of…that’s Oggau.

Rust is the kind of chocolate box town (or technically a  free city, but if size matters let’s stick to town) which people love or hate, a bit like Bernkastel on the Mosel. Personally I love it. You can imagine Haydn or Mozart swaggering out of one of its inns after a few jugs, not so fanciful as Haydn spent around forty years working for the Esterházy family up the road in Eisenstadt. 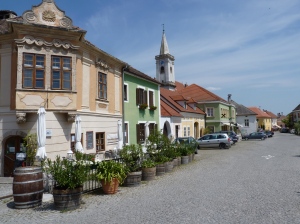 Rust is a great place for a few days holiday from Vienna. Great restaurants, some superb wine producers, boat and bike hire, with ferries over to Ilmitz, and other winey destinations, which will carry your bike too. But you probably know that if you read my blog regularly…so back to Oggau. 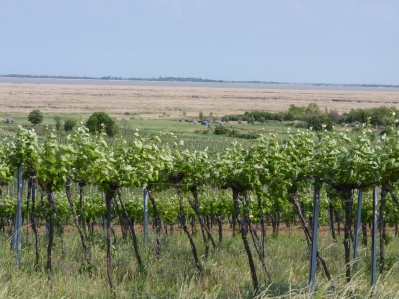 Gut Oggau is the producer in Oggau making some of Austria’s most exciting wines, so one has to ask why they get little mention in the Austrian wine guides? One reason is probably because they make natural wines (shock!). Low intervention winemaking isn’t new in Austria, far from it. It’s a country well ahead of some in this respect. But one gets the impression that the establishment, as with all things it seems in this country with its Habsburg past, is torn between liberalism and innovation on the one hand and an innate conservatism on the other. It’s not so far removed from the way some established anglophone wine writers ignore these type of wines, despite the avid interest from consumers and the proliferation of small independent wine merchants in London (and Paris, New York, San Francisco et al) selling them.

Gut Oggau’s wines are biodynamic (certified by Demeter), and they are also released not under an Austrian DAC, but as Österreichischer Landwein, like the difference between AOC and Vin de Table, or more accurately, the new Vin de France moniker which a lot of innovative winemakers have turned to there. But these are not the most interesting things about the wines.

The concept for the varied list of wines created by Eduard Tscheppe and Stephanie Tscheppe-Eselböck is that of a family. Each wine is named after a family member from one of three generations, and so each wine/person fits into a family tree. The theme is given life by the highly distinctive labels created by German design agency Jung von Matt. I’ve counted nine family members, though there might be more lurking. As each family member ages, so do the line portraits on the label. This mirrors the wines because they all come from designated single vineyards, so as the vines mature so do their avatars…genius. 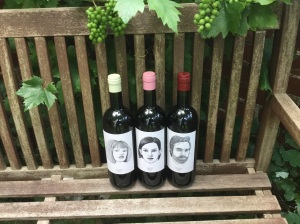 I currently have three of Eduard and Stephanie’s wines. Theodora is a fresh Gruner Veltliner/Welschriesling blend, tending to a soupçon of spritz in her first summer. I plan to drink the 2014 soon, before that’s lost. The Joschuari I have is the 2011. This is a silky Blaufränkisch made for food. Obscurely, my favourite family member right now is Winifred. Described as a rosé, but some might think a pale red, there’s fresh red fruits, spice, and that characteristic crunch (a blend of Blaufränkisch and Zweigelt). If the much hyped Provençal pinks of the moment leave you cold, this is pretty much verging on the profound. It’s a nice wine with which to begin a light lunch outdoors and then sink into a deckchair to savour the last glass as the shadows approach.

So, appetite whetted, where can you buy them? Sadly it’s not easy, but it’s not impossible. You can, of course, go to Oggau. It’s not as hard as it sounds. Though finding the right bus from Vienna’s central bus station took a little ingenuity, it’s only a couple of hours down to Rust, via Eisenstadt. I’d recommend staying and hiring bikes in Rust as it’s only a few kilometers up the road from Oggau, and there’s more to do. But if you visit Gut Oggau in summer you can eat at their Heuriger.

In the UK you can purchase Gut Oggau from Dynamic Vines, for which see my last post. If you can’t get to their shop on a Saturday give them a call. If they’ve sold out (fewer than 20,000 bottles of the whole family are produced every year and this is now pretty much a cult domaine worldwide), check out the list of restaurants they supply. I have bought Winifred in Winemakers Club on Farringdon Street, in the arches under Holborn Viaduct . I’m not sure they have any right now, but if you annoy John enough he may wangle some more. One or two others list some on Wine-Searcher, including Wine Bear. I’ve not seen Richard for a while but he’s a very helpful guy and well worth contacting as well.

Gut Oggau are at Hauptstraße 31, A-7063 Oggau. For visits and tastings call +43 (0)664/2069298. Email is: office@gutoggau.com but I generally find that with a busy wine domaine you are far more likely to elicit a positive response from a friendly phone call than an email. An appointment is required.

Note on “Natural Wines” and “biodynamics”:- There’s no legal definition of what is a natural wine. Indeed, many producers who intervene in vineyard and winery with chemical pesticides, fungicides, herbicides, insecticides, synthetic fertilisers and wine additives/processes strongly dislike the implied insult to them which such a term might suggest. But winemakers thus described will have a philosophy of low intervention, both in the field and the vat room. They believe in transferring the flavour of their vines into your glass by manipulating the wine as little as possible. This means many things, but there are a couple of important things which go beyond certified organic viticulture and winemaking.

Biodynamics is a very large subject, but in (very) brief terms it is an extension of organic agriculture, whereby the producer follows the philosophy of Rudolph Steiner, and applies the nine biodynamic preparations he prescribes as an alternative to chemical vineyard applications. In addition, work in the vineyard and cellar is carried out according to a biodynamic lunar calendar (created by Maria Thun a little over fifty years ago and perpetuated by her son, Matthias). The Demeter Association is an internationally recognised certifying body for biodynamic viticulture, and Gut Oggau is a member.

3 Responses to All’s Gut in Oggau