Not With a Bang but a “Wimps” Lunch

This is the way the world ends, or at least I hope so. Wimps lunches are so called because they are for people who only like one bottle each for lunch (although they actually allow for ten bottles between each table of eight). They take place every month at La Trompette and are organised through the http://www.wine-pages.com wine forum. This month was the turn of Austria/Germany.

As usual, the event is as much about the food and company as it is about the wine, but we didn’t do badly on that front. We actually managed twelve wines, one being a replacement for the TCA affected 1976 Grünhauser in the list below. 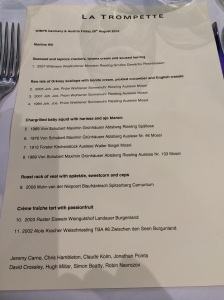 Most of the wines shone to some degree. Other than the corked (if not irredeemably) 1976 (wine 6 above), the red Niepoort was quite disappointing. It was lovely six months ago yet this bottle tasted a bit dilute and lighter. The only other red on the day (on another table) tasted much better – an unusually big, especially for its age, 2004 Zweigelt from Johann Schwarz with some input from Manfred Krankel. 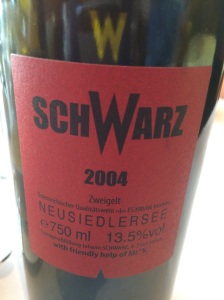 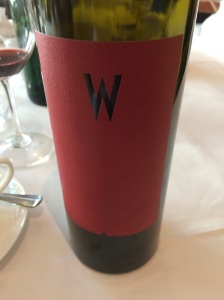 For me, the wine of the day was the first to pass my lips, the Wittmann Morstein. Refined in the extreme, it started quite rich but the minerally tone took over. Claude Kolm attributed the very special terroir characteristics to the limestone soils of the Wonnegau. As others have said, it’s one of the most exciting areas in Germany right now and this beautiful wine shows why. I wish I had a few bottles. 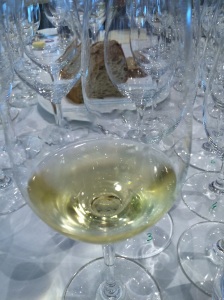 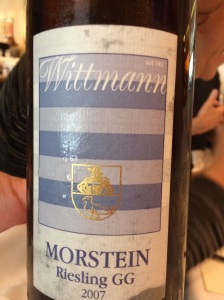 The Prüm Auslesen were fascinating to compare. The 2005 seemed quite a bit too young for me, but at the other end of the age scale the 1994 was classy. The only problem here was the food pairing, the scallop starter (with bonito cream, pickled cucumber and wasabi). It had, ironically, been perfectly matched with the Riverby GV last week, but the wines today overpowered it, and the acidity of the dish grated. Lovely dish, lovely wines, but no meeting of souls. 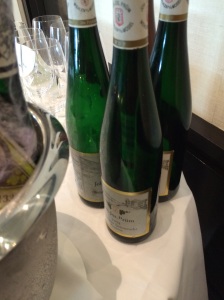 The next five wines ended up as a quartet of Von Schuberts surrounding a museum piece 1913 from the Pfalz. Aside from the corked 1976, these were marvellous wines, with the Grünhausers an embarrassment of riches, each with something distinct to offer.

The Kirchenstück was in many ways a miracle, deserving of a paragraph of its own. That it was drinkable would have been enough but it was more than that. It’s sugars, which had undoubtedly sustained it on it’s journey were now, by-and-large, all gone in terms of sweetness. Madeira brown in colour, the nose was complex, both powerful and haunting at once (though a couple of people broke the spell exclaiming “cornflakes”). The slightly caramel-honey palate lingered and lingered. It’s not often I get to try a really old German wine, but it was a privilege. To think, the kind person who brought this is also absailing for charity at the Olympic Park on Monday. What a guy! 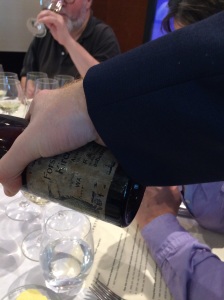 I mentioned the Blaufränkisch as the only disappointment of the day. A shame as it was our solitary red and it was paired with the dish of the day, veal rack with späetzle, sweetcorn and ceps, with fine aromas and flavours compensating for the wine. Yet it’s a red that has won praise from critics, so a duff bottle…maybe. 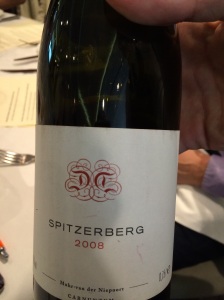 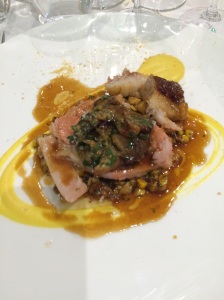 With a dessert of crème fraiche tarte with passionfruit the two dessert wines provided a real contrast. The western side of the lake gave us a fresh Ruster Eiswein, with a lightness contrasting its sweet richness, and good acidity. The Kracher, from the eastern side of the Neusiedler See, was typical of this wine/grape at this sort of age. The acidity has diminished but not the sweetness and you are left with a sweet honey richness. Although La Trompette’s wine team thought it the best of the Krachers on show, I actually loved a taste of a Kracher Chardonnay on another table, younger and fresher. 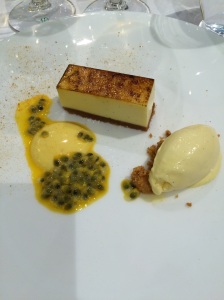 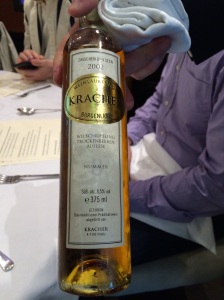 As usual, a wonderfully congenial time was had by all who made it yesterday. If indeed the world were to end after such a wonderful array of these wines, I’d be pushed to complain. 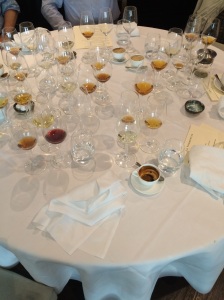 Writing here and elsewhere mainly about the outer reaches of the wine universe and the availability of wonderful, characterful, wines from all over the globe. Very wide interests but a soft spot for Jura, Austria and Champagne, with a general preference for low intervention in vineyard and winery. Other passions include music (equally wide tastes) and travel. Co-organiser of the Oddities wine lunches.
View all posts by dccrossley →
This entry was posted in Austrian Wine, Dining, Fine Wine, German Wine, Wine, Wine Tastings and tagged 1913 Riesling, Austrian Wine, German Wine, JJ Prüm, Kracher, La Trompette, Maximin Grunhaus, Von Schubert, Wimps lunches, Wittmann. Bookmark the permalink.

3 Responses to Not With a Bang but a “Wimps” Lunch