Jolly, Beau and New, but no Nouveau

Last night a dozen devotees slipped into the air-conditioned private room at 10 Cases in Covent Garden for a much anticipated look at some “new school” (is that s-cool?) Beaujolais, the kind of trendy stuff mostly found in those hyper-cool Parisian wine shops and bars (see blog post of 7 May), and increasingly, as luck would have it, in the UK. Here, we have been slower to cotton on that Beaujolais is one of the most exciting regions in France currently. But we are getting there. 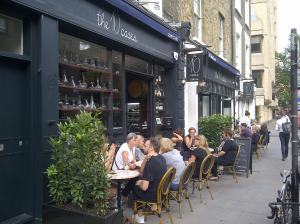 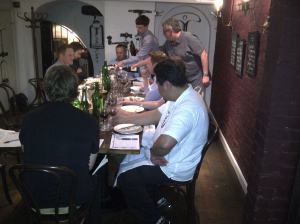 We tried fifteen wines, all from growers who are relatively new (with the odd exception), trying to exclude the well established names like Foillard and Métras etc. The tasting was an unqualified success, at least for those I spoke to afterwards. The room proved more than adequate, the aircon essential on a humid summer’s evening. The food and service were good. We had the benefit of the expertise and local knowledge of Beaujolais vigneron and importer, Christopher Piper (some wines being sent as samples by producers he works with). And last but not least, all the wines were in good or decent condition, although a couple deteriorated in the glass – something we had expected to see more of considering how hot it was for the transportation of the bottles earlier in the day.

A full list of the wines tasted can be found at the bottom of this article, but we all had two votes at the end for our top two wines. The winner on the night, by the short head of a single vote, was Julien Sunier’s Regnié 2011. Ironic considering how the decision to make Regnié a full Cru (back in 1988, I think) was so criticised at the time. Joint second and third place went to the Domaine du Botheland Brouilly 2014 from Laurence and Remi Dufaitre, and Julien Duport’s Cote de Brouilly 2012. 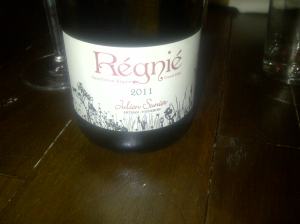 Although no 2013s did quite so well, all the next three placed wines were from this vintage: Paul-Henri Thillardon’s “Les Boccards” Chénas, Eric Janin’s Clos du Tremblay Moulin-à-Vent, and Julie Balagny’s “Cayenne” Fleurie. I also liked Karim Vionnet’s “Vin de Kav” Chiroubles, though it got no votes for the top two spots. 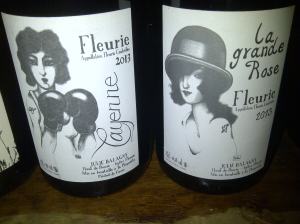 So a nice spread of villages and vintages. Whilst tasting notes as such would tend towards monotony, the vast majority of the wines were very much “alive”, with fresh fruit. Not all were showing “typicity” (whatever that may be), and there was that feral touch of volatility in some as well, though on the whole nothing to scare those at the dinner who may be more sceptical than some of “natural” wines. Indeed, the naturalista tendency in some of the wines gave them that characteristically refreshing, zesty, lift. As for sulphur, I’d be surprised if anyone woke up with a headache this morning, although some of the more hardcore showed serious intent to continue the party (a two hour door-to-door journey home means I invariably wimp out of such debauchery around 10.30pm).

One final word for our aperitif for the evening, Jean-Paul Thevenet’s On Pète la Soif, which we were lucky enough to have a couple of bottles of, one coming from me and one from Paul at Roberson, where you might still be able to pick up a bottle or two. Pale, pinkish in hue, gently sparkling, off dry, with the alcohol of a Kabinett but without the acidity, it proved a delicious, light refresher. No one voted it wine of the night, but I think everyone loved it. I’m seriously miffed I don’t have any left for my mother to try this weekend, and if that seems like faint praise, it isn’t. It’s a wine only the most inveterate wine snob would look down their nose at.

Some of these wines will be best tracked down in Paris, but many are, or soon will be, available in the UK. Christopher Piper is a major source for new Beaujolais producers, but also take a look at Les Caves de Pyrene and The Sampler, to name two more. And, of course, Roberson, who not only sell the Thevenet fizz and Sunier, but also some of the more established stars of the region, as do Solent Cellar down in Lymington. Berry Bros have done a lot to promote Sunier over the past few years, and they will be gratified to see one of Julien’s wines come out on top, so take a look on their web site as well. Happy hunting…and thanks to Nathan at 10 Cases for looking after us, and for understanding my decision to opt for the Oreo Cheesecake instead of the more suitable cheese platter chosen by most of my fellow diners for desert. 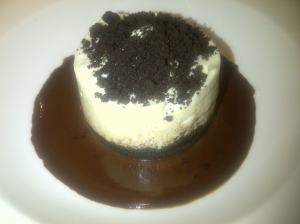 3 Responses to Jolly, Beau and New, but no Nouveau