A Bit of a Theise

Terry Theise’s book Reading Between the Wines (UCP, 2010) had been floating just above my radar for a long while. It was the recommendation of Heidi Schrœck about a month ago which acted as a catalyst to make me read it, and it’s quite different to almost any wine book I’ve read. 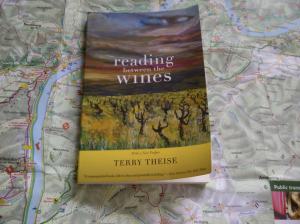 That’s doubtless why the book seems to produce a marmite reaction, people either loving it, or failing to be captivated by Theise’s prose. That prose is very poetic at times and it does become necessary to read between the lines a little. When you do, you find that most of what he’s saying is actually quite clear and straightforward, he’s a man with as strong views as anyone in wine. But Theise is also clearly an aesthete, and someone who, like me, is very much open to being drowned in wine’s sensual pleasures. He admits he’s not the type to actually go out and get his hands dirty making the stuff.

Where Theise strikes a chord with me is in the role he sees for wine in our lives, its potential importance, how we should judge wine, and how we describe it. But he doesn’t really go about this in the normal wine merchant writes biography way – a tale of meeting his winemakers and drinking through ancient bottles in dank, dark, cellars (though when he does stray into that territory it’s always enjoyable, particularly as his growers are all interesting people from family businesses, farming the same plots for generation after generation). His approach is more loosely thematic, and that’s where I think he might lose some readers.

If you see wine as merely a beverage which gets you intoxicated, then Theise will not appeal. Wine for him is clearly capable of the profound. One sentence I like in the new Preface to the Paperback reads “Many wines, even good wines, let you taste the noise. But only the very best wines let you taste the silence.” I love that because I hold it true of many things, like the silence at the end of a piece of music before the audience applauds. But with wine it’s different because with some really big and powerful wines there’s no silence. However, with a complex and subtle Mosel Riesling, a fine Vosne, or a well aged Comtes de Champagne there’s something which doesn’t hit you like a steam train, or a Jimmy Page chord. As so often quoted, silence is a rhythm too. But also the silence he recalls reminds me of a line from Byron’s Childe Harold (Canto III), “All Heaven and Earth are still, though not in sleep”. See what Theise does to you!

Theise admits, like any wine merchant, to keeping an eye on the competition, always fearful that (his words) the opposition’s wine will kick sand in your face. But this doesn’t mean he’s fixed on importing big hitters in the literal sense, far from it. He’s a man after my own heart in seeing greater value (and ultimately, complexity) in wines which don’t shout in a conventional sense, following the old adage that silence is the best way to yell at the top of your voice (Battista).

The key message in this book is to reject all the things which today we are told are essential for the assessment of wine, because wine is not enjoyed by those who consume it in the same way as professionals judge the wine. Blind tasting certainly has a place in my life, but as a game, for fun, where everyone is happy to make an idiot of themselves. Theise quotes fellow star importer Kermit Lynch with saying that “Blind tastings are to wine what strip poker is to love”. I can see the point he’s making.

On the subject of points, Theise is very scathing indeed. He clearly likes Robert Parker as a person, but not the effect that points have on defining a wine, however much the wine critic may plead for us to look beyond the score, to the words. Whilst admitting that points must in some way be useful to consumers “or else they wouldn’t have metastasized as they have”, he suggests “…the system of thought they enforce is a feedback loop in which the reader is infantilized and thus comes to depend on the score”. I can’t really disagree, as someone who does pity, to a degree, the narrow experience of those who only drink the high scoring wines of one omniscient individual.

He sums up his view thus: “…there’s an inherent problem with the notion of ‘perfection’ … because wine is not only judged, it is also used, and enjoyed, in many and varied ways.”

Lest you think Theise is all with the poetry of wine and down on the prose, he nevertheless echoes my feelings again on tasting notes, both their composition and place. He ridicules the endless metaphors of smell and taste we use, where we start off okay with our peaches or gooseberry but fly away with ever more exotic/extreme scents and flavours into the realms of total obscurity. If you’ve been trying to write tasting notes for a decade or three you not only feel (or should) a touch of embarrassment every time you go to type “star anise” or “trampled thyme”, but also immense frustration when you trot out the same stereotypical term for the three thousandth time (in English there is only one word for blackcurrant, so how many times do we grope for cassis as an alternative?).

This is a book where one man’s enthusiasm for wine comes across stronger than many. It’s a genuine deep love, a passion, a life consuming joy and pleasure (the connection wine unexpectedly brings between Theise and his real father (Theise was adopted) is very moving). It comes through in many of the meetings he has with vignerons in France, Germany and Austria. He quotes one winemaker I have met, Laurent Champs, who heads up Champagne Vilmart. Now I love Vilmart’s wines, and I’d count them alongside Bereche as one of my favourite two growers in the region. And I know Laurent to be a thoughtful and sensitive wine grower, but he’s also an intelligent man of the world who travels widely to market his wines. He’s no idle romantic. Theise quotes him talking about the 1996 vintage and the choice of quote seems to strike a chord deep within him. Laurent says of that vintage, it “isn’t a vintage of pleasure, it’s a vintage of desire”. Theise himself says “I loved the deliberate ambiguity of that statement. It’s wise in some way, to understand that desire is deeper than pleasure”.

The depth of Theise’s passion comes over in his seemingly equal love of pleasure-giving “lesser” wines. In a section towards the end of the book he shares those grape varieties he turns to for something other than pure quality in the conventional sense, something more elusive. One of those varieties is Muscat, a grape which he says can “restore to us an almost primordial innocence of the senses”. He relates a story of a father giving his young son a dandelion, and the son being transfixed by “this common little flower, his entire being numinous with delight”. I could imagine myself sitting in the sunshine in Rust, being similarly transfixed by Heidi Schrœck’s delightful, lace-like, Gelber Muskateller, the wine I have convinced myself he was thinking of.

So Terry Theise is very much a wine lover in the same mould as myself – prone, in a transcendent passion for wine, to be transported into flowery prose and concepts which shimmer like heat haze over a summer field of corn. But once you dig beneath the surface of his terroir you find deeply rooted beliefs which direct us to enjoying wine in all its diversity for the innate pleasures it gives. A simple message. I enjoyed the book – thanks Heidi for pushing me into reading it.

One wine I’ve enjoyed very much recently is Trenzado from Suertes del Marqués in Tenerife. This wine is made mainly from Listan Blanco, not noted as one of the world’s most noble white grapes. Yet this wine is not just well made, it’s concentrated, complex and suggests a real sense of place, something common with all of the lovely wines made by Suertes. How can this simple grape make such a good wine? Care in the vineyard and empathy in the cellar. This is something to treasure over “99 points”, and not something easily conveyed through herbs and fruits. Perhaps after reading between Terry Theise’s wines I appreciated it just that little bit more.

Writing here and elsewhere mainly about the outer reaches of the wine universe and the availability of wonderful, characterful, wines from all over the globe. Very wide interests but a soft spot for Jura, Austria and Champagne, with a general preference for low intervention in vineyard and winery. Other passions include music (equally wide tastes) and travel. Co-organiser of the Oddities wine lunches.
View all posts by dccrossley →
This entry was posted in Rust, Wine, Wine Agencies, Wine Books, Wine Writing and tagged Appreciating Wine, Heidi Schroeck, judging wine, Laurent Champs, poetry of wine, Suertes del Marqués, Tasting Notes, Terry Theise, Trenzado, Wine and Points, wine biography. Bookmark the permalink.