Let Me Tell You A Little About Shoalhaven Coast

Australia is brimming with new wine regions. Just as we get used to Tumbarumba and Hastings River in New South Wales we hear that Willyarup, within the wider Margaret River appellation, has just been given approval. One region you may not yet have heard about is Shoalhaven Coast. The first vines were planted here in the 1820s at Coolangatta Estate, by Alexander Berry, a close friend of the famous Australian wine pioneer James Busby…but then it went very quiet. That is, until the 1980s when Coolangatta’s new owner planted Sauvignon Blanc.

The reason this emerging wine region is worth writing about is that it has the potential for quality wine and growth, especially from wine tourism, because it begins just 200km from Sydney. But this coastal region also possesses some of the most beautiful beaches in the whole of NSW. In fact the region is so beautiful, but probably relatively unknown to people outside of Australia, that I think this article will have a bit more of a travelogue feel to it.

There are sixteen cellar doors in the Shoalhaven Coast Region, but eight are listed on the Shoalhaven Coast Wine Trail. This begins at Kiama in the north, with Yarrawa Estate to the west, close to the rainforest of Kangaroo Valley, being the most northerly of the wineries. The route continues south, quickly skipping down the Princes Highway to Shoalhaven and its famous heads, then further south via Nowra and Wandandian to Milton and Ulladulla. Between these two settlements, around an hour’s driving from the north of the region, you will find Cupitt’s Winery. The wine route then goes just a little further to its most southerly outpost, Bawley Vale Estate.

It has been the standard view that Shoalhaven Coast is a reasonably cool climate region, based on the prevailing cooling winds off the Tasman Sea, which can ameliorate temperatures. But wine writers invariably caution for summer humidity and especially summer rain. This is a similar problem to that traditionally faced by the Hunter Valley, but that is a long way north, perhaps at least five or six hours driving.

Australia is currently suffering one of her longest droughts. The reason we were down here was principally to visit family, and one of them runs a dairy farm. Feed is in such short supply that he’s shipping it from Western Australia, at crippling cost. There’s not enough rain to make the grass grow, and he has five hundred cows to feed. So at least at the present time the books are not quite accurate. It’s very dry.

The grape varieties planted in the region have, to a certain extent, reflected this perception of humidity and summer rain, so for example you will find the hybrid variety Chambourcin in many vineyards. Chambourcin is particularly resistant to mildew and other fungal diseases, and is used for medium-bodied red wine, rosé and, increasingly, sparkling reds. But planting has been wider and experimental. Vinifera varietals originally planted include Chardonnay, Verdelho (especially), Sauvignon Blanc, Semillon, Cabernet Sauvignon and Syrah, whilst more recent plantings have included Tempranillo, Arneis, Viognier, Sangiovese and Tannat.

What will grow remains to be seen. The region has won “1,000 awards”. Awards are admittedly prolific in the world of Australian Wine, but even if the number can be taken with a pinch of salt, it does show an intent, in terms of quality. What is certain is that the region is well known gastronomically, as you might expect from somewhere which has changed beyond recognition since I first came here several decades ago (my wife spent some of her childhood on the southern coast, at Mollymook, about ten minutes from Milton). It is now a smart playground for the kind of wealthy Sydneysider who craves a “Grand Designs” holiday home and some long and unspoilt surf beaches. So you will dine well down here.

I’m going to write a little about my visit to Cupitt’s Winery, and then mention a lovely neighbourhood restaurant in the shadow, literally, of a much more famous one. If I include some photos of the beaches and the bush in order to make you jealous, or possibly to entice you down, I make no apology.

Rosie and Griff Cupitt founded their winery between Milton and Ulladulla in 2005, choosing the Shoalhaven Coast as somewhere they felt they could make a more European style of wine. Rosie, with a degree in oenology from Charles Sturt University, had gained experience in Europe, including the Upper Loire in France. The couple have more recently passed on winemaking to their sons, Wally and Tom. 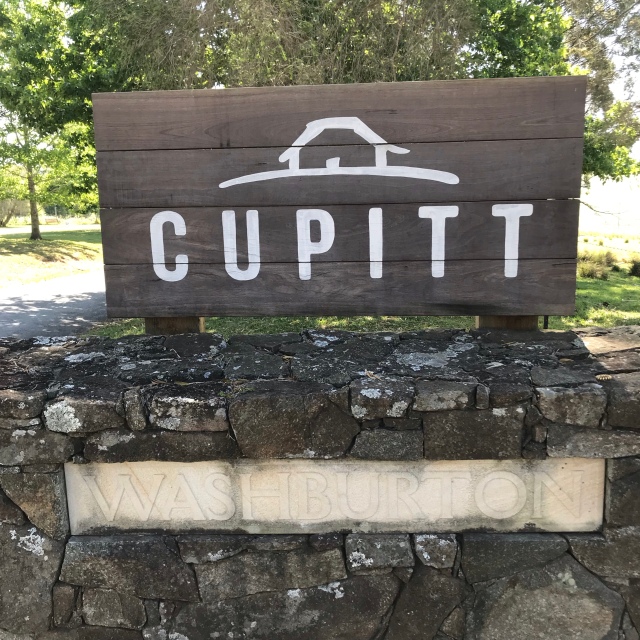 Like many wineries in less well known regions of New South Wales, and indeed in some well known regions if you read my previous article, on Polperro Wines, fruit is bought in from afar. Cupitt’s has a lot going on. It’s a boutique winery, a micro brewery, and a fromagerie, and they purchase a good number of grapes from the Hilltops Region and Tumbarumba to supplement their currently small crops of home fruit. Fans of Clonakilla will know of Hilltops, northwest of Canberra. The wines from purchased fruit are pretty good. In fact Cupitt’s has become a James Halliday Five Star Winery.

There’s a spicy lees contact Viognier, a very crisp Fiano, a pristine grapefruit Riesling, a fresh skin contact Marsannay, Dusty Dog Syrah (with 2% Viognier co-fermented) and Carolyn’s Cabernet Sauvignon (traditional, oaked), all from Hilltops grapes. There’s also a Provençal style Rosé, a Pinot Noir called The Pointer and a very interesting “Little Red” blending Pinot Noir, Nebbiolo and Barbera, all from Tumbarumba. That’s a lot of wines, and we enjoyed tasting them all (there were still one or two we missed) but not really why we came.

At the present time the only wine Cupitt’s makes from Shoalhaven fruit is a Sauvignon Blanc, called Alphonse Sauvignon Blanc. We tasted the 2019 which has seen a little oak, but not enough to really stand out. It was impressive, showing all the cool climate precision you hope the region is capable of giving. This cuvée saw seven months on lees and it is full of citrus, fresh acidity and a floral bouquet. It is also nice and long.  It’s made as a nod to Alphonse Mellot, the producer of steely biodynamic Sancerres, with whom Rosie had worked and learnt from during her time in Europe. It’s Aus$34 at the cellar door.

Cupitt’s is expanding its home vineyard plantings, with Semillon, Albariño, Gamay and Cabernet Franc, but these will take a while to produce wine. I’ve not tried any of the beers but the cheeses are remarkably good. There’s a very good Chaource lookalike called Veuve, both young and aged versions available (I have to declare an interest – the milk comes from my wife’s cousin’s farm). We also got to try a hard cheese which at three months old resembled a young Comté (buttery, nutty) from raw milk. Angel Williams is the cheesemaker, and it was as interesting chatting cheese with her as it was tasting the wines. She makes cheeses with Rosie Cupitt, and has also written an acclaimed book How to Say Cheese – An Interactive Cheese Journey.

The excellent restaurant has been under Russell Chinn’s direction since 2010 (he worked at The Waterside Inn under Michel Roux). They have recently won a “Star Cellar Door Award 2019” from Gourmet Traveller Wine Magazine. 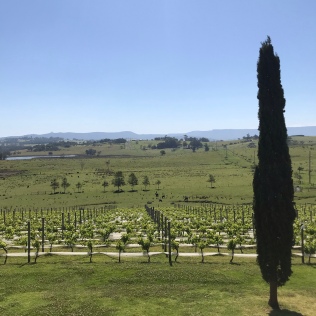 Another random connection with the area near Milton is Tallwood Restaurant, at the north end of Mollymook Beach. One of our friends in the UK mentioned that they had worked in New Zealand with a very good chef and his wife, and that turns out to be Matt Upson, who set up Tallwood. Now this is a rather unassuming place in a small parade of shops, a few tables on the pavement but surprisingly spacious inside. It needs to be because it seems to be full all the time. We dined on a Monday evening, when there’s a chef’s special set menu (Aus$55) and it was packed with what I presume were locals. The food was exceptional.

The wine list here is pretty interesting too. We drank Mada Wines Sui Generis IV Whole Bunch Grenache 2018 from Murrumbatemen (quite a nice link for our visit to Clonakilla in the next article). This is a one-off wine from Hamish Young, aged in used French oak and bottled early (February 2019). Deliciously concentrated Grenache from cool climate Canberra District. 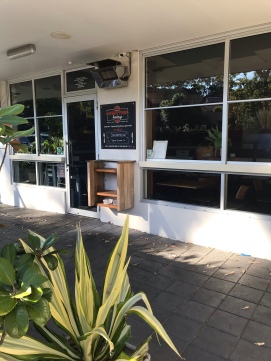 Just a few dozen paces along the road towards the beach is Bannisters by the Sea, one of two Bannisters outposts. Within this luxury hotel is what they describe as the “iconic” Rick Stein Seafood Restaurant. We’ve not tried it. I’m sure it lives up to the hype as everyone talks about it. It’s just that…we went to Tallwood instead.

The village of Milton, and the town of Ulladulla, both on the highway, offer a host of cafes and small restaurants worth exploring as well.

If you find yourself drawn down here, then Mollymook Beach is one of those near perfect expanses of pure white sand. I say “near perfect”. Next beach north is called Narrawallee Beach. It’s equally long, an expanse of sand bordered by the ocean on one side and a small strip of bush on the other, giving the illusion of a desert island. Mollymook is where you will find the surf school and families in summer, but Narrawallee has always been almost deserted when I’ve been there. On a stroll from end to end one morning I counted just four dog walkers.

Just a minute or two further north by car and you get to Narrawallee Creek. This stunningly beautiful inlet boasts mangrove trees and an expanse of shallow water. At low tide you might catch a thousand strong army of soldier crabs appearing from under the sand, along with an attendant flock of long billed waders looking for dinner. Just follow the same road that passes Narrawallee Beach until you reach the car park at the end, near the children’s play park. Look for the steps down and you’re there. Watch the tide. 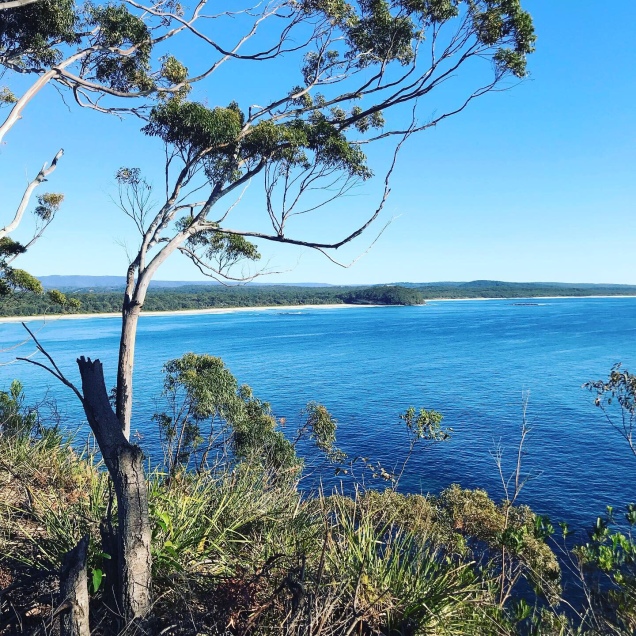 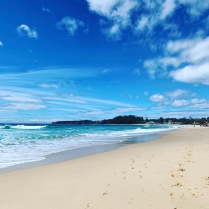 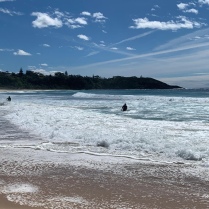 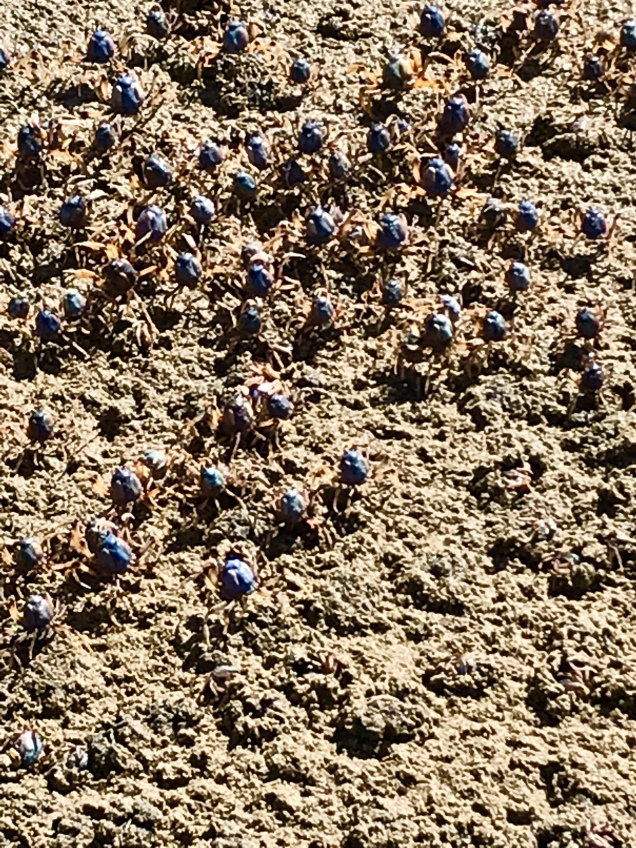 One final recommendation. We drove up into the hills for about twenty-to-thirty minutes off the highway to go on the Mount Bushwalker bush walk. It is described as one of the best bush walks in the state, and it was certainly the best I’ve been on. It’s an eight kilometre walk in total, through varying types of bush and over rock along the top of a ridge, ending with a spectacular view of the flat topped mountains of the Budawang National Park. Because the track is on a ridge the walking is fairly easy, and yellow arrows keep you on the path on the flat rocky parts of the trail. We went up at 7am to avoid the heat and we saw not one soul (nor, thankfully, any snakes), though the bird song was a wonder to listen too, as were the views we soaked up. After half an hour just staring at the Budawangs we managed to tear ourselves away with some difficulty. We were lucky. The following day all the National Parks were closed because of the fire risk. For walk info see Here. 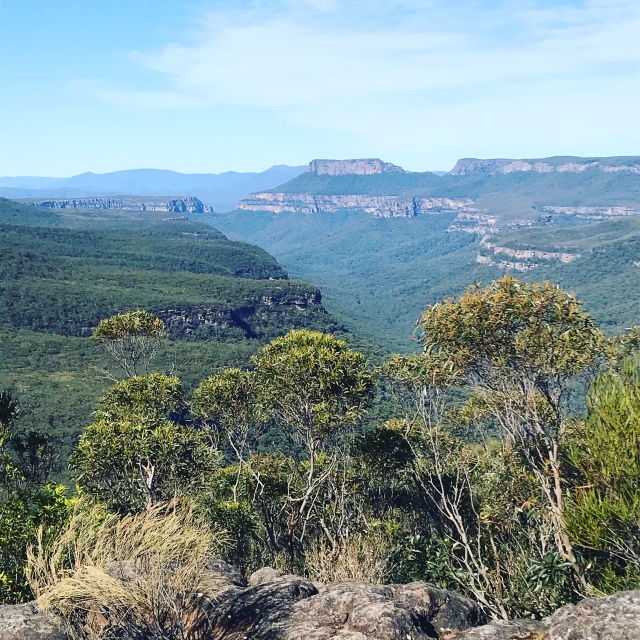 We stayed on Narrawilly Farm, at one of the Narrawilly Farm Cottages. These are two well equipped and comfortable. but simple, mud brick cottages on Narrawilly dairy farm, about three or four minutes north of Milton. If you are interested, check them out on airbnb here.

For Cupitt’s Winery and Restaurant see Here. They can be found at 58 Washburton Road (off Slaughterhouse Road), Ulladulla, NSW. The cellar door is open seven days a week. The winery is signposted off the Princes Highway, both outside of Milton and Ulladulla.

The other wineries on the Shoalhaven Coast Wine Route are (north to south):