Another rare foray into what I’ve been drinking at home amid the dust of a seven week building programme. It’s partly an excuse to tell you about the wine we drank on Sunday, but as is often the case, a flick through the cellar book shows a few nice, yet unusual, wines to go with it.

Arbois Savagnin 2009, Domaine A&M Tissot shows just how on form Stéphane has been this past decade. This is made from prime Savagnin which undergoes 30 months ageing under a veil of flor without topping up. It was bottled in 2012. The current vintage on sale is, I think, 2011. Although we walked out to Montigny-les-Arsures during last year’s harvest to look at the amphorae in action, this bottle came from the domaine’s Arbois shop, on the central Place de la Liberté. To describe it, you’d think I was talking about a Vin Jaune – nuts, citrus acidity, a fino-like quality, a certain restrained plumpness (perhaps the 14% alcohol). Yet they sell it for around €21 at the shop, far from one of their more expensive wines, and a bargain. With their cheapest Vin Jaune retailing for around €45 in France, and much more in the UK, this is one to seek out, and to lay down for a little while, if you want to try the “VJ” style without the investment. It’s just a glimpse of what that longer-aged wine becomes, but it’s also a lovely wine in its own right.

There is little doubt, even among established wine writers now, that the Tissots have made this into a world class wine domaine, and a large one for a family to run, having recently topped 50 hectares. At my last count they were producing just shy of thirty different wines, without adding the various alcools. But even as they grow, they seem not only to retain quality, but the wines get better and better. For what it’s worth, my favourites are probably the immaculate range of single vineyard Chardonnays, including the special Clos de la Tour de Curon, and the Savagnin En Amphore, of which I’ve written about a couple of times in the past twelve months. Oh, and those mind blowing sweet wines…and the Crémants, oh the “BBF” and “Indigène” Crémants… 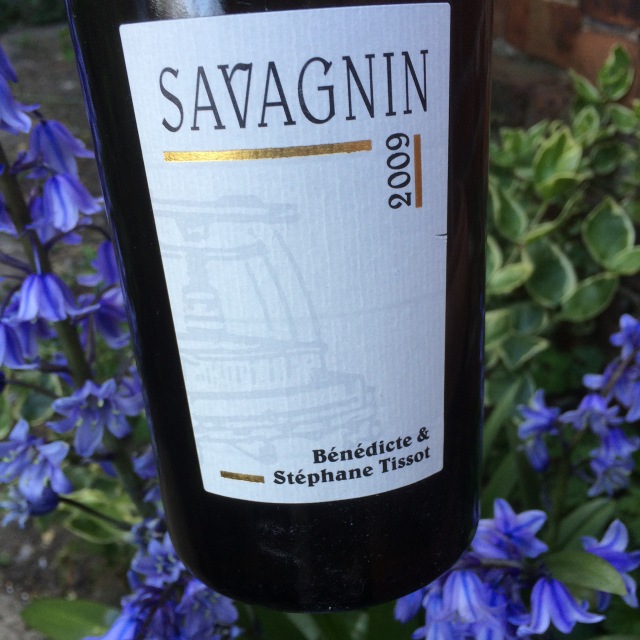 A white wine which could almost not be more different is the Sieveringer Ringelspiel Wiener Gemischter Satz 2014 from Jutta Ambrositsch. I think regular readers know I’m partial to Vienna’s field blend. I don’t deny that the location of the vineyards attracts me, and the heurigen taverns which sell the local wines along with often hearty food on the green edge of the city’s suburbs. But the Gemischter Satz wines are refreshing, light, fruity, often with a slight spritz or prickle to them. There’s a sharp acidity, which might not please everyone, but if Vinho Verde’s or Txacoli’s lightness and zing is your thing, then you’ll enjoy this as well. Jutta’s Ringelspiel (one of three single vineyard versions but, as far as I’m aware, the only one imported into the UK) explodes with flavour, has a touch of Riesling about the nose, and a palate which is slightly reminiscent of sparkling wine when it has gone a little flat (perhaps a faint chalkiness), yet very much without the dullness. I believe there are at least twenty grape varieties in here, all co-planted on this site.

Jutta favours the principles of biodynamic farming and natural winemaking, and this wine proudly proclaims its vegan credentials too (its winemaker is vegan). It tastes (as a consequence?) clean, bright and alive. She may be young, but Ambrositsch has been mentored by Fritz Wieninger (of Bissamberg), who, along with Franz Mayer (Mayer-am-Pfarrplatz and Rotes-Haus, Nussberg), were between them largely responsible for the commercial and critical revival of the Wiener Gemischter Satz field blend wines in the past twenty years, both being devoted to this unique viticultural patrimony and its traditional expression. Jutta Ambrositsch represents the next generation, along with winemakers like Stefan Hajszan (Hajszan Neumann) and Rainer Christ. Her production is tiny but her wines are worth seeking out.

“Tschuppen” 2011, Ziereisen is Blauer Spätburgunder (aka Pinot Noir) from the most southerly vineyards of Baden. So southerly, in fact, that you could walk the nine or ten kilometres to Basel from Efringen-Kirchen, and the Ölberg, where Ziereisen’s vineyards are situated. Ziereisen has a very good reputation for Pinot Noir, but this is mainly based on the selection wines from their Jaspis range, such as their Jaspis Pinot Noir Alte Reben (they also make one of Germany’s best Syrahs in this range). Tschuppen is more modest, in both  intent and price, but it’s a lovely wine, good value, and a repost to those who joke about German Spätburgunder, in terms of both price and quality. Sheltered by the Black Forest, red grapes ripen well here, hence the Syrah, but the Pinot clones Hanspeter Ziereisen insists on now are resolutely German and Swiss, unlike those who have followed the fashion for the Dijon clones. Another peculiarity of this estate, rarely seen among Germany’s top producers, is the rejection of the Qualitätswein designation in favour of the basic Landwein. This allows them to focus on what makes great German red wine without too much regulatory restriction.

The Tschuppen is above all fruity, with both cherry and strawberry in evidence. Think a Burgundy village wine, perhaps from the Côte de Beaune. It’s only 12% alcohol, but the fruit gives it a roundness, and there’s a savoury quality too, perhaps coming from the bottle age. With more than five years in bottle this was on song and showing no tiredness. Remember, elsewhere in this part of Europe this was not considered the finest of vintages. Along with the sheltered vineyards of the Markgräferland, it’s testimony to the attention to detail of this estate in all aspects of viticulture and winemaking. I get the feeling that Ziereisen are sometimes forgotten on lists of the finest producers in Germany, but that may simply be because they have a focus on red wine (half of their vines are Pinot Noir). If the quality, and value for money, of an estate’s entry level wines define its overall quality, then Ziereisen is right up there.

Arbois “Très-orDinaire” 2012, Hughes-Béguet is a wine which I keep thinking will tire. A relatively cheapish Arbois Savagnin made in the ouillé style, it falls perhaps into the camp of Patrice Béguet’s fun wines (like the barrel-fermented pink, Pulp Fraction and the pét-nat Ploussard, Plouss Mousse, both of which I love), rather than showing his more serious side (the single vineyard Ploussards from vines in Pupillin (the Côte de Feule), and at Mesnay (Champ Fort) where Patrice, his wife Caroline Hughes and the family live). And a lovely young family they are. There is still the air of a family starting out as vignerons here (they began in 2009). The wines are all well priced compared to some of the older stars of the region, and a visit to their cellars beneath the family home by Mesnay’s church is likely to result in an enthusiastic hour spent talking and tasting, which many winemakers with a greater reputation find hard to spare. Patrice in fact makes so many different cuvées, it’s a miracle all the wines seem to retain such a focus. All of them are worthy of purchase, and he even makes a lovely Macvin (I’m not usually a big fan), and has some distillates of pressed grapes ready for an eau-de-vie at some point (really promising stuff).

The Très-orDinaire 2012 is certainly darker, of a more golden hue, than it was when I first tasted it, back in 2014. But it was so good then that I’m glad I bought just enough that I still had one final bottle to drink a few weeks ago. A scent of fresh lemon blends with hazelnut in a modern twist on Savagnin. The initial impression is uncannily like Alsace Riesling, with a steeliness, before the nutty element kicks in. It has retained most of the freshness of its youth, but now shows an unexpected depth. Lovely. I didn’t visit Patrice last year, but I certainly hope to go back later this year. 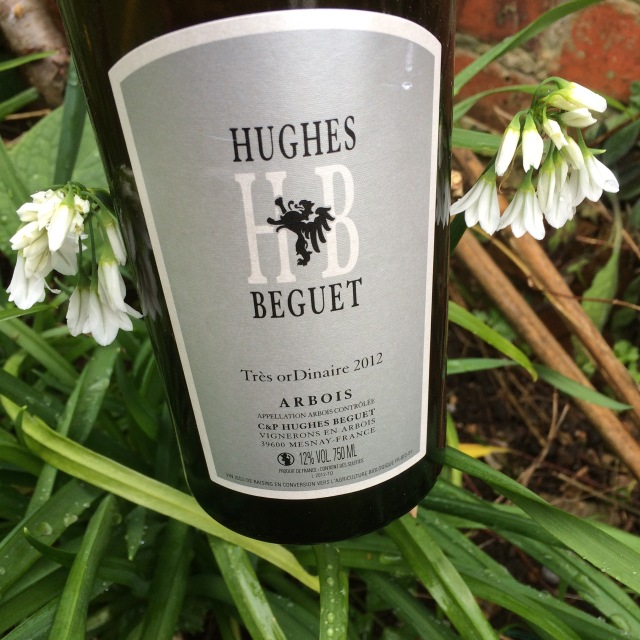 Other wines which gave great pleasure last month included Henri Gouge’s Bourgogne Pinot Blanc, Ch Caronne-Ste-Gemme 2005, a Markus Molitor Kabinett and Colet-Navazos’ delicious Xarel-lo Extra Brut 2011 sparkler, all worthy of attention. But the four wines above provide exceptional value and great flavour, as well as something a little different. If you can find them, enjoy.

The wines of Stéphane and Bénédicte Tissot (Domaine A&M Tissot) are often found at Berry Bros & Rudd and at the two branches of The Sampler in London (South Kensington and Islington).

Jutta Ambrositsch is imported by the Austrian specialists, Newcomer Wines, currently in the Shoreditch Boxpark). Although this is the only one of her Gemischter Satz they bring in, they do also stock several other wines from her small Viennese holding.

The wines of Ziereisen can be found at one or two small merchants. This one came from Winemakers Club, but I think Vinovero in Leigh-on-Sea (Essex) may have some. Hedonism (Mayfair) often have some of the pricing Jaspis bottlings.

I’m not currently aware of anyone importing Hughes-Béguet into the UK, but I’m sure someone will correct me if this is not true. Some of them were imported by The Wine Society, and I did come across one at a tasting at Planet of the Grapes last year as well.