A forlorn attempt to catch up with recent wines before I take a summer break. What to leave out is so difficult, but after a bit of reluctant pruning, here are the most exciting and interesting wines I’ve drunk at home over the last six or seven weeks. It’s a mixed summer case I’d love to repeat all over again, were it not for all the new and different wines I’ve got lined up for when I return to the keyboard, hopefully before summer finally disappears.

Grüner Veltliner Brut NV Austrian Sekt, Martin Diwald – Martin makes a range of exciting wines at Großriedenthal, in Wagram. This is one of the fizzes I’ve been drinking this summer and every bottle has been pale and frothy, with a gentle mousse and bead. Quite floral, not complicated, just deliciously refreshing. Neither is it expensive. Solent Cellar had this, via Red Squirrel.

Morillon “Vom Opok” 2013, Werlitsch, Steiermark – Staying in Austria, we are in South Styria, a land of rolling countryside and Ewald and Brigitte Tscheppe, working in harmony with that beautiful land. Ewald makes mainly Sauvignon Blanc and Chardonnay, Morillon being the old Austrian name for the latter. This pale wine is not for oak lovers, but although only 12.5% there is a touch of richness too. Delicious. You will usually find some Werlitsch wines at Newcomer in Dalston.

Muscadet de Sèvre et Maine “Terre de Gneiss”, Guibert/Caille – One of the best Muscadets I’ve had for a while, and I’ve had some good Muscadets. Christelle Guibert, Decanter’s Tasting Director, has got together with Vincent Caille, and made this wine in a concrete egg. What makes it stand out? The lees give texture, there is more fruit than many Muscadets, and there’s a mineral intensity, as you’d expect from the name. Less than 2,000 bottles were made, although this has been available in quite a few UK retailers this summer. 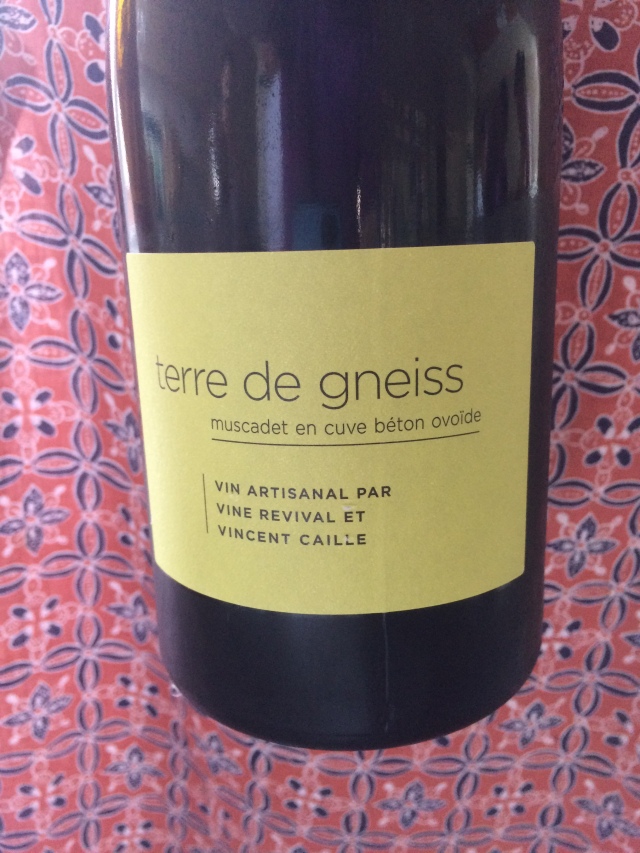 A Demûa 2014, Stefano Bellotti/Cascina degli Ulivi – Stefano will hate me calling him a Piemontese viticultural aristocrat, but he makes some of the finest artisanal bottles in the east of the region. The Filagnotti vineyard near Gavi is planted with 100-year old vines, a blend here of Riesling, Timorassa, Verdea and Moscatella (the latter is not a Muscat variant, but an old variety of Chasselas). Pale orange, soft, and gently thought provoking. Pure biodynamic loveliness. Les Caves de Pyrène sold me this.

Morgon Côte du Py Réserve 2010, Jean-Marc Burgaud – Quite dark and mellow now, with intense cherry fruit but without losing that Morgon “Py” structure. Majestic and impressive. Perhaps this producer should be given a bit more attention. On the few bottles I’ve had, I’d say these wines are at the more concentrated end of the Beaujolais Cru spectrum, but without losing a really nice freshness. I bought this bottle in Paris, but I think Berry Bros import Jean-Marc into the UK.

Weissburgunder 2015, Rennersistas, Burgenland – These two sisters, Susanne and Stefanie, have only been making wine (in Göls, on the northeastern side of the Neusiedlersee) since the 2015 vintage. Their wines are a work in progress, but their infectious enthusiasm, and those we all tasted at Raw this year, make me certain they are a name to follow. Most impressive, for me, are their wines made from Pinot Noir, yet this Pinot Blanc breaks the mould of this grape variety. For starters, it’s cloudy. The colour is a greeny yellow. But when you taste it, the lively fruit (apples) is really alive. Definitely a natural wine, not at all conventional, but exhilerating, absolutely. Newcomer wines get small stocks of these wines from time to time.

Himmel auf Erden 2014, Christian Tschida, Illmitz – I’m sorry, more Austrian wine, more Neusiedlersee wine. I didn’t realise when I began writing this! Christian Tschida’s “Himmel auf Erden” (Heaven on Earth) wines sit at the lower end of his range, in terms of price, but the quality is very high. The white blends Scheurebe and Pinot Blanc and has a straw colour. There are solids in this unfiltered bottling. The fruit is peachy on the nose and a little nutty on the palate. It’s a fresh summer wine, but it develops a lot as it warms in the glass. Very long. Newcomer Wines are again your best bet. 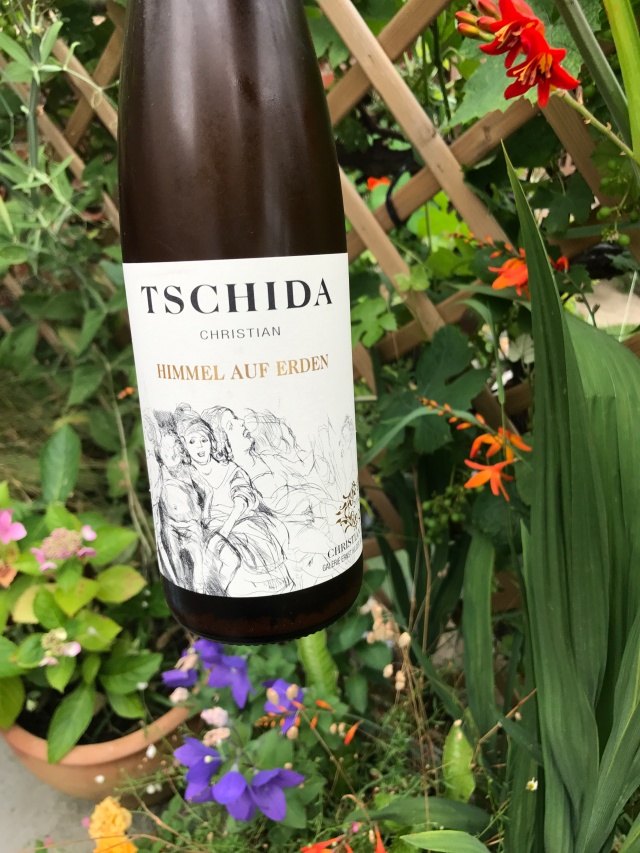 Bourgogne Aligoté 2014, Goisot, Saint-Bris – The Goisots in Saint-Bris are long time champions of the Auxerrois, in northern Burgundy. They are perhaps better known for their Chardonnay and Sauvignon Blanc from white grapes, but their Aligoté always ranks in my favourite half dozen in Burgundy (without paying silly money). This 2014 proves the grape benefits from a bit of age. The grape variety’s natural acidity has toned down, and you might be surprised at the little bit of richness which has replaced it. Jean-Hughes and Guilhem have, like most vignerons in the wider region, been devastated by hail and frost in recent vintages. A friend phoned them and was told they have nothing to sell at present. Please support them. Butler’s Wine Cellar in Brighton had just a few bottles left.

“Les Dix Bulles” Pétillant Naturel, Domaine de la Touraize/A-J Morin, Arbois – André-Jean Morin started out in 2010 after leaving the Arbois co-operative. This remarkably fresh pink pét-nat is quite light, frivolous even. Redcurrant Ploussard fruit has a hint of raspberry too. The mousse is frothy and it has lots of CO2 to keep it fizzing away. I drank this in the garden the day after a plethora of smart Champagnes, and in those circumstances it was no less enjoying in its simplicity. From the domaine, brought back by friends.

Melting Potes 2016, Le Vendangeur Masque – A bit of an enigma, this, so let me explain. Back to Northern Burgundy, this time the village of Courgis (Chablis) and Alice and Olivier De Moor. Like the Goisots, they were wiped out in 2016. Friends in Southern France gave them some grapes so they could make some wine, and three cuvées were produced. This one blends Grenache Blanc, Clairette and Viognier. It’s a lightish, fresh, Vin de France, made with the same care they use to make their domaine wines. A delicious tribute to the generosity of their potes. Another domaine to support in hard times, when the nature they nourish has bitten them badly. Solent Cellar got just one case. Enquiries also to Les Caves. I get by with a little help from my friends! 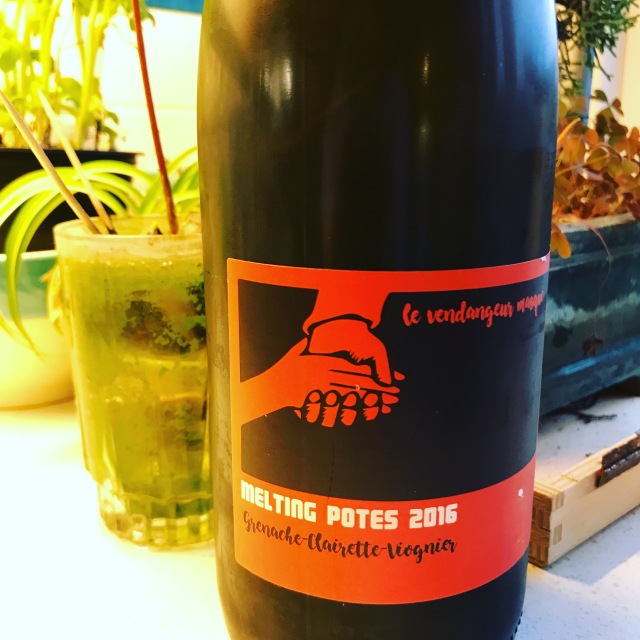 La Bota de Florpower “Más allá” 53, Equipo Navazos – This is a 2010 bottling which had an extra ten months in barrel. I like to keep the odd bottle of these back to see how they age (I still have one bottle of 44, believe it or not). You’d expect this “unfortified fino” of a table wine to be past it. Wrong! In the words of The Stranglers, “golden brown, texture like sun”. The nose is still chalky, and there’s a flor-like freshness…still. What it has gained is an unexpected richness and complexity. Did I read Julian Jeffs recently stating that Jerez etc table wines will never be great? If my memory serves me correctly there, I suspect he’s never tried an older Florpower. Unique. Alliance Wine is the importer of Equipo Navazos in the UK.

“ULM” Vin de France, Domaine de L’Octavin – Alice Bouvot makes some of the most exquisite wines in Arbois in a plain garage on the edge of town, not far from the natural wine hangout, Bistro des Claquets. “ULM” is an acronym for ultra long maceration, and is a co-vatted blend of red and white (Pinot Noir and Chardonnay) grapes. The result is a palish red which has a strong bouquet of strawberry and raspberry, mirrored very gently on the palate. Acidity is quite fresh, and the long finish lingers, even when the bottle is empty. Contemplative. This bottle came from the domaine, but Tutto wines is the UK importer. I think this is pretty sensational, but I’m guessing that the many who think I’ve really gone over to the dark side will now have their fears confirmed.

I’m not quite sure what I shall be drinking over the next month! But cheers to whatever you are doing. I shall hopefully manage to post a few pics from my adventures to Instagram, with luck, and hope to be posting more articles here by the second half of September.