The Return of Fizz & Chips!

Before there was Fish & Fino there was Fizz & Chips. Latterly this took place at Fish Club in Clapham Junction, before they got fed up with us…and then closed down. But Fizz & Chips began as an irregular but very well attended event at Masters Superfish, in Waterloo, about two or three minutes down the road from the Old Vic.

I’d been very much looking forward to the revival of Fizz & Chips, and it must be said that the fish at this wonderful chippie is very good, possibly unrivalled in the Capital. The events of the day before in London did take the edge off the idea of drinking lots of phenomenally good Champagne, a wine usually associated with celebration. There was not a lot to celebrate in London last Thursday…except perhaps the resilience of the city itself. But in the end I was glad it went ahead, that those who had thought about pulling out didn’t, and that the hard work of the organiser of this event (Chris Hambleton, of Champagne Tuesdays and Bacchus Wine Auctions) resulted in a wonderful evening of fabulous wine.

The (ostensible) purpose of this particular gathering was to compare two Champagne vintages, 2002 and 2004. Both have reputations as fine vintages. 2002 was the first great vintage of the new millennium. The 2002 wines also have a reputation for being concentrated, some might say opulent. 2004 has a very fine streak of acidity, and many call it a “classical” vintage, but at the same time it was a record crop in most parts of the region.

As with all such events, vintage generalisations are proved, more or less, to be wide of the mark. First of all, house style needs to be accounted for. There are cases where the mark of the producer seems to outweigh that of the vintage, or at least to temper vintage influence. A stated aim with non-vintage Champagnes, it is often no less true with vintage wines to some degree. It was also pretty evident that most (not all) wines of both vintages needed more time. There was complexity aplenty at this exalted level, but equally, plenty more to come.

Pierre Péters Cuvée Les Chétillons 2002 – This is the old Cuvée Spéciale, pure Grand Cru Chardonnay, which Rodolphe Péters has now relabelled to reflect its source,  from this fine Le Mesnil lieu-dit. It would rank in my top dozen desert island bottlings, and this 2002 is just pure elegance encapsulated. There’s a lot of finesse and freshness, which makes it appear lovely now. But it is still remarkably young, a fact that two people who know this wine had told me before I opened this, my first bottle.

That said, much as I hate to crow about a wine I brought along myself, I ranked this as my wine of the night, despite strong competition. Awesome, in fact. It expresses that fine Le Mesnil mineral line so well, and this seems to hold back any vintage gras. What little I have left will ideally rest for a further five years, if I can resist.

Vilmart “Coeur de Cuvée” 2002 – Vilmart’s “Coeur” is another wine firmly pencilled in on my desert island dozen. It’s a wine which can do remarkable things in off-vintages, but here we have it in a very fine year. Vilmart is based at Rilly-le-Montagne, with around 11 hectares of premier cru vines in the surrounding villages. Laurent Champs runs the company, formerly headed by his father, René, who is responsible for the wonderful stained glass which adorns the winery. Coeur de Cuvée is made from the heart of the first pressing of grapes. The wines here are all fermented in 225 litre oak.

This bottle was remarkably cold to begin with. “Coeur” is notorious for needing large glasses (not flutes), and benefits from splashing into a carafe (quite fashionable in top end restaurants a few years ago). It also has a reputation for being pretty oaky for its first decade, and there was clearly some wood still to be taken up by the 2002 wine, even at almost fifteen years of age. It has weight, but also a real zip to it. There is a sense of real complexity behind the slight burliness. As it opened out it became really beautiful. Keep and reap!

Pol Roger 2002 – This was very different from the two previous ’02s. Still young, but slightly squat. The fruit appears quite sweet and plumpish, and several of us noticed a bitterness on the finish which one person put down to “underdeveloped extract”. Although I said this is young, and it does need more time, I’m not really sure where it will go?

We did have a Pol Roger Blanc de Chardonnay 2002 but this was very corked indeed. A shame. I drink a lot less Pol than I used to but always have a certain affection for this cuvée, which may have been lighter and more lemony. But corked wines can’t be helped. A fascinating discussion about corked Champagne followed, with quite a few attendees bemoaning a worse record than mine on this score (long may that continue when it comes to wines in this price bracket).

The other table had a Pol Roger 2004, which I didn’t taste, but which was generally preferred for drinking now, or  certainly sooner than the 2002. 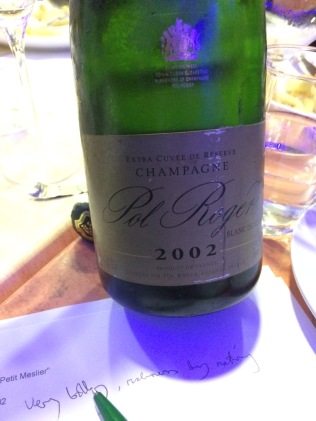 Bollinger 2002 and Bollinger 2004 – Bollinger, one of the greatest names in Champagne, has a string of great sites around its home of Aÿ. This is another proponent of ageing in wood, perhaps the great wood ageing Champagne House.

My thoughts on the two Bollinger vintage wines, or “Grande Années”, is first that our perceptions were probably clouded by the quality of some of the other wines tasted. You scribble notes, but then some bigger or greater wines come along and you lose that sense of what you’ve just drunk. The 2002 was described, quite accurately, by someone as “very Bolly”.  Grande Année is certainly a wine, like Dom Pérignon and Krug Grande Cuvée, which an aficionado will probably spot on the nose without too much trouble. The 2002 had a richness to it, whereas the 2004 was slightly harder (and still big), but also layered with toast and nuts, citrus, and above all, a floral note coming through gently.

When you see tasting notes for both of these wines, they invariably give a drinking date from 2020, so we are really just dipping a toe in here. I expected the 2002 to be more evolved than it was, to be honest. Whether these wines are as good as those near legendary Grande Année vintages of the 1990s, I’ve no idea, but they will go the distance, I think.

Moët & Chandon 2004 – I’d been tempted into trying one of these some time ago. It tasted younger on Thursday than I remembered the previous bottle to be, yet it was one of the most evolved of the wines we tasted. I will also say (though don’t assume prejudice) that it was better than I’d expected it to be, with a certain meatiness, yet balanced by a degree of finesse. But that broadness has led some people to suggest it might not be a vintage for the long haul here.

Veuve Clicquot 2004 – This was also quite forward, though not so much so as the Moët, with a probable peak drinking date of around 2020 or just before. There was a maturity and a softness on the palate, and it was one of the first wines to show biscuit, and also something toffee-like. Veuve has been making some very fine vintage wines, but I’m not sure to what extent this particular bottle fired peoples’ imagination. 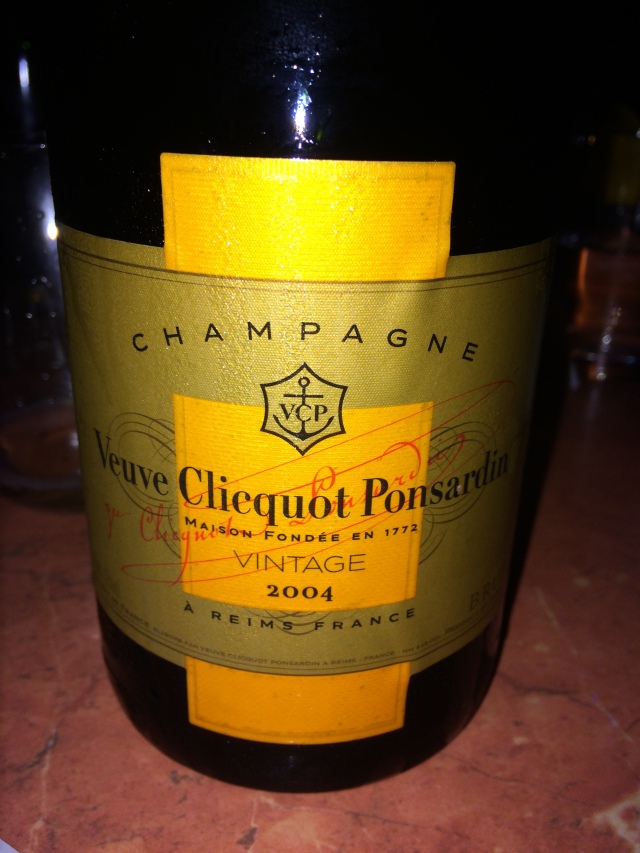 Veuve Fourny “Clos Notre Dame” 2004 – I’ve known this wine as “Clos Faubourg Notre Dame” for so long I couldn’t say when the “Faubourg” dropped off the label. This is a monopole walled Clos at Vertus, at the very southern end of the Côte des Blancs, made from Chardonnay vines over sixty years old. It’s aged in wood, and generally sees around nine years in bottle before release.

The nose here is maturing, probably in part due to the long bottle ageing and wood treatment. I’d put its prime drinking window somewhere between 2020 and 2025, so it’s approaching maturity but with a little more to give. There’s nougat and almond (almost essence) on the nose, but not overpowering. The palate is pretty complex. It’s only Premier Cru fruit, but it’s those old vines. I really love this cuvée, and I might therefore be a little subjective. But what I like is a certain understated complexity, which without doubt grows as it sat in my Riedel Riesling glass. A wine whose subtlety can be lost among bruisers, yet it does have a certain power as well. 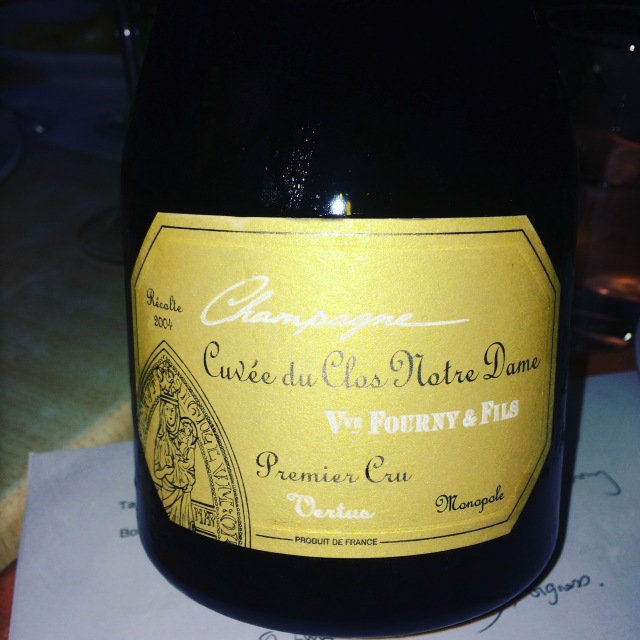 The next pair of wines naturally got everyone talking. We were expecting Dom Pérignon 2004, but someone kindly brought along a 2002 with which to compare it. The 2002 was very unique. There’s hay and hazelnut, but a very real (and complex) note of ginger as well. Quite forthright. The 2004 was not altogether different on the nose, though for me definitely Chinese spices, if more muted. The palate of the 2004 was ever so slightly muted too, giving little away at first. It then began to build towards a crescendo of nascent complexity coupled with growing freshness too, but it never reaches it’s apogee – there’s a lot more to come.

Both Doms are young. I’ve had the 2004 a couple of times. It’s always amazingly generous when people open them, but it has to be said the vintage is not ready. Ultimately it will be truly tremendous, and I will try to save my own small stash. It was one of my wines of the night for the sheer potential in the bottle. I hope I’ve read it correctly.

That was the end of the wines on our table, but a couple were sent over by our neighbours. Paul Bara 2004 from magnum was a big wine, full of appley richness, softness and power. I do like Bara. I’ve been enjoying the Special Club 2002 this year, which is approaching maturity (one of those slightly more forward ’02s). My guess is that this vintage 2002 would be the same in bottle, although the magnum effect will give it longer life in this incarnation. The man who brought it suggested some people found it lacking subtlety. For me, it was just a really good vintage wine from a very good grower, stamped with the personality of the maker more than the vintage.

The final wine I got to try from the other table was Taittinger Comtes de Champagne Blanc de Blancs 2004. “Comtes” is a sure fire contender for best value prestige cuvée Champagne. It first appeared in the 1952 vintage, when it was formed from old vine Grand Cru Chardonnay. It has its off-vintages, but rarely. Another of my desert island wines, I love it for the way it harmoniously blends a streamlined acidity, mineral presence, and finesse, all beneath a rich layer (or three) of leesy fruit.

In youth there is citrus, as here. It makes the wine immediately refreshing, and gives it an elegance which the underlying richness can’t hide. There’s always pleasure in a bottle of Comtes, for me anyway. Probably my number two on the night, with Vilmart, Dom ’04 and the Veuve Fourny up there too. But such comparisons are slightly unfair. If we’d been comparing those straight vintage wines falling outside my list of favourites with Non-Vintage bottles, the story would have been different. In true fizz & chips fashion, it was some night. Immensely enjoyable, even if comparing 2002 and 2004 proved less simple than we’d hoped.

2 Responses to The Return of Fizz & Chips!