Missile in the Silo

There’s a fantastic new restaurant heading to London later this summer. Brighton’s loss will be Hackney’s gain, because when Silo‘s lease ends they will be moving north. Silo is many things, but its claim to fame is as the UK’s first zero waste restaurant. Before I write about the lunch that three of us ate in the Brighton venue last Friday I think it’s worth telling their story, and outlining their philosophy too. It might not be easy for others to follow their lead in all its aspects, but many restaurants could incorporate some of these ideas.

The Silo motto is “Reuse, Reduce, Share, Repeat”. They aim to respect not only the environment, but the produce they use and cook. They make their own soft drinks, mill their own flour to make their own (wonderful) sourdough bread, churn their own butter and make almond milk. Silo also follows a nose-to-tail philosophy with meat and aims to source ingredients as locally as possible. 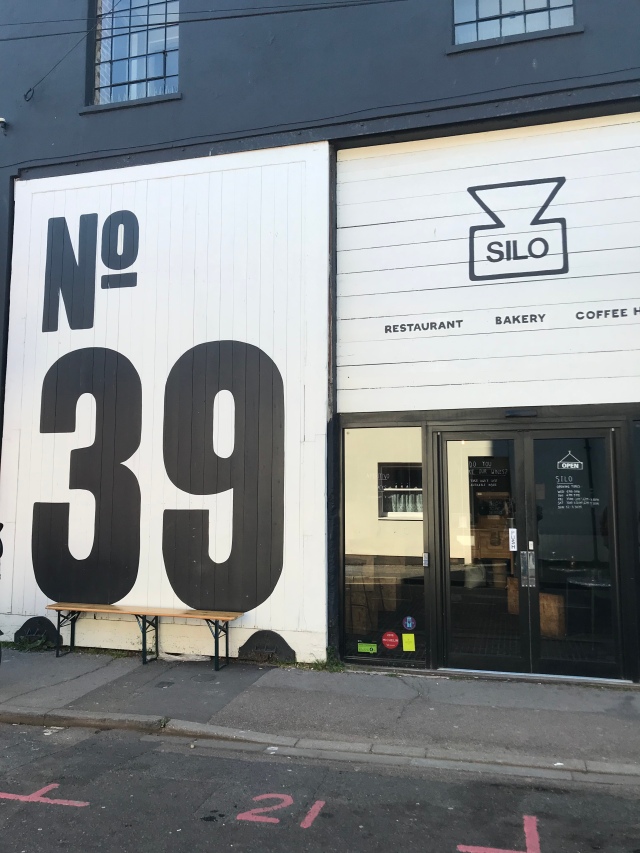 All deliveries must be in reusable containers, and any waste is composted in Silo’s “aerobic digester” (which they share with commercial and residential neighbours), although the menu is conceived in a way which minimises waste, and surplus usable food goes to the charity FareShare, supporting local vulnerable people. Upcycling is another aspect of the Silo philosophy, to reuse rather than recycle where possible. Check out the tables and chairs.

The menu uses a changing array of in season (including foraged) and “cleanly farmed” ingredients, avoiding unnecessary processing, and where processing is required (for example, milling flour), it is carried out using pre-industrial methods, on site.

All of this is worthy, but would matter not one bit were the food not of the highest order. I went to Silo not all that long after it opened in Brighton, but I always felt that it didn’t quite stimulate my need for the wine offering to be just as exciting as the food. More recently, the wine list has been revamped with the help of Ania Smelskaya, ex-Sager & Wilde and Plateau. Silo now has a frankly stunning list of natural wines.

The dishes at Silo are half way between small plates and larger selections. One of our number is vegan, so we selected three vegan plates and two meat. Radicchio salad was a feast of sweet and bitter fresh leaves. Shitake mushrooms were firm and fresh, and chick peas with hispi cabbage and caramelised onions was sweet and substantial. The crispy breaded pig’s ear, which lit up the face of one guest, was frankly the best ear of pig I’ve ever tried. Pork belly was again more substantial but tender. The quality of the ingredients shone through here, but I think this was equalled by the kitchen, who cooked the food with great sensitivity to the dishes’ innate flavours and textures. 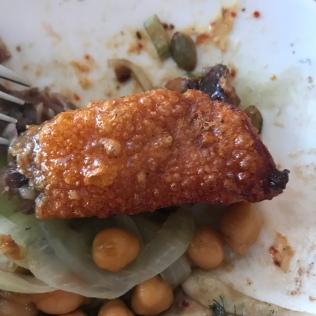 We drank what was a perfect aperitif on arrival, Rio Rocca Frisant Bianco, Il Farneto. Il Farneto is an eight hectare estate in Emilia-Romagna, and this white frizzante is a blend of Sauvignon Blanc with local variety, Spergola. The second fermentation is made with must from the same grapes and the wine is fragrant, light and dry, made cloudy from the lees. The alcohol level seems low, but is actually 11.5% on the label. I’d never tried this wine before, but Silo currently has it by the glass.

The first wine gave us the chance to read through the now more substantial Silo list. The task was to select natural wines which would interest a friend who doesn’t drink a lot of natural wine, though is very open to try them. I went for a classic, despite having drunk this fairly recently, and having a bottle left at home. If Jura (okay, along with Burgenland) is where my wine heart lies, then this Arbois producer is certainly in my top half-dozen producers in that region.

Betty Bulles, Domaine L’Octavin is a petnat, a blend of direct press Gamay from the Ardèche with Muscat sourced near Perpignan in Roussillon. The wine has persistent tiny bubbles which carry the slightly bitter red fruit of the Gamay. The Muscat doesn’t dominate the bouquet, but it must add to the floral lift that is undoubtedly there. Alice Bouvot began making wine from grapes harvested outside the Jura region several years ago after some very small harvests, and she now makes a lot of negoce wines. The gnome motif is however home-based. Several live, and perhaps watch over her ageing wines, in the garage which serves for L’Octavin winery in the back streets of Arbois.

Our final wine was another from the by-the-glass selection. λ13, Ktima Ligas (the wine is generally called Lamda) is one of Thomas, Jason and Meli Ligas’s wines from Pella in Northern Greece, made using permaculture techniques which require almost no vineyard interventions (certainly no chemicals, and minimal if any pruning, just repositioning of shoots). The wonderful ecosystem Thomas has created does pretty much all the work.

This particular version of Lamda is a blend of 60% Assyrtiko and 40% Roditis. The fruit is gently peachy, underpinned with a gentle minerality, expressing the terroir, which is part limestone and part sand and clay. The grapes see a short three day maceration on skins before ageing in old oak, adding just a little texture.

This is another wine with no added sulphur, yet it tastes (at least to me) clean and fresh without any frightening volatility. I genuinely believe that if you drink natural wine that has been shipped and cared for properly, there should be minimal issues with spoilage and volatility.

Two of us finished with a cheese selection (British, from Neal’s Yard…Silo does not yet have its own herd for cheese making), whilst the other enjoyed pumpkin ice cream. 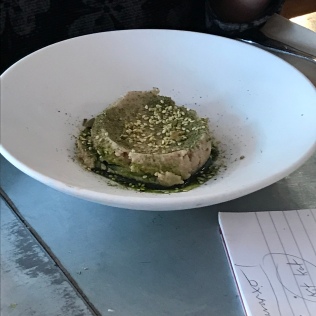 Altogether, a spectacularly good lunch. Silo is at 39 Upper Gardner Street in Brighton’s North Laine, perhaps a ten minute stroll from Brighton Station. It seats 40, and serves lunch only on (currently) Friday, Saturday and Sunday. Dinner is served Wednesday to Saturday, 6pm to 9.30pm.

I would strongly recommend a visit before Silo moves. They close in Brighton at the end of May (2019) and will open in Hackney perhaps in late July or August (follow them on Instagram for updates @silobrighton ). As for Londoners…I come up to London week-on-week for lunch. I think that it’s hardly any more difficult for Londoners to come to Brighton for the same. There’s Silo, and there’s Plateau. And there’s sunshine and there’s sea. Come on down. And whether at Silo or Plateau, don’t forget to raid the take away wine lists. 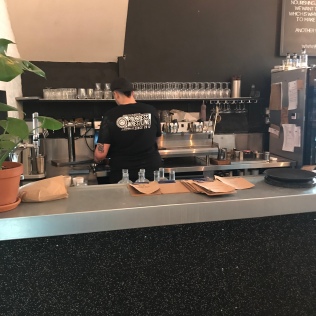 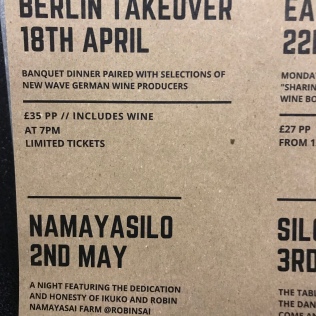 Writing here and elsewhere mainly about the outer reaches of the wine universe and the availability of wonderful, characterful, wines from all over the globe. Very wide interests but a soft spot for Jura, Austria and Champagne, with a general preference for low intervention in vineyard and winery. Other passions include music (equally wide tastes) and travel. Co-organiser of the Oddities wine lunches.
View all posts by dccrossley →
This entry was posted in Artisan Wines, Dining, Natural Wine, Wine and tagged Betty Bulles, Brighton Dining, Domaine L'Octavin Betty Bulles petnat, Ktima Ligas Lamda 13, Natural Wine in Brighton, Rio Rocca Frisant Il Farneto, Silo Brighton, Zero Waste Dining. Bookmark the permalink.