The second Spice Oddities at the India Club was a perfect example of how far some wine lovers will go to select truly “different” wines, odd in their origins (to a degree) but certainly not in their flavours. All seven wines today were attractive. As far as the difficult task of food matching went,  most people thought the wine which provided the best overall match was a Vinifera/native hybrid from Missouri!

As always (it has been the case since the 1960s) the India Club provides a combination of wonderful food at incredible value, less than £20 with service for the most expensive set meal. A selection of starter dishes, four main dishes with rice, breads and chutneys. The main clashes  were the lime pickle and chilli bhajis, the latter being pretty hot and impossible to match with wine for some considerable time after eating it…yet they are so good. 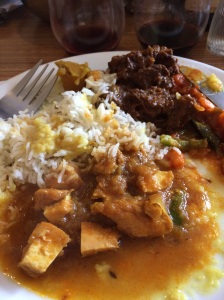 The Wines (all wines tasted blind)

Dry River Gewurztraminer 2006 The colour and nose suggested New World but the bottle neck didn’t provide sufficient clue to the origins of a wine we all spotted by grape variety. It wore its 14% alcohol really well, assisted by being off dry. As time went on this wine seemed to grow sweeter. It also seemed to provide one of the better food matches on the day, so a well thought out selection. Nice bottle age too. 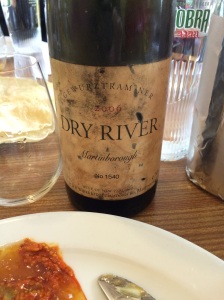 Champagne Du Mont-Hauban 1999 Demi-Sec This was very much a bottle fermented wine from Northern Europe, and its tight and persistent bead and advanced autolytic character single it out as Champagne. But no one guessed it was demi-sec because it had become dryer over time, though not dried out. A very nice wine on its merits, but possibly not the best food match. It was also, though obviously aged and with an oxidative note, surprisingly sprightly for a 1999. 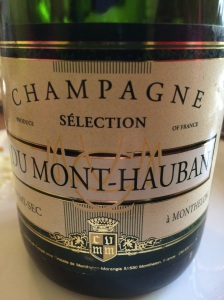 Hatten Wines Anggur Rosé, Bali Possibly the most unusual wine we’ve had at any Oddities lunch, Spice or not. Unlike some Balinese wines, this is made from home grown, not imported, grapes. It was actually quite drinkable, and I’d take it over one of the big branded pink wines we see on offer in UK supermarkets, and indeed over some of the acidic bottles professing a southern French origin I’ve mistakenly bought in French ones. Only 11% alcohol. Pleasantly fruity, if simple. I’d like to say I nailed this exactly…and, actually, I did, but claim no big prize – sometimes a focussed analysis of the wine (which yielded “simple but pleasant”) is less important than knowing the travel movements of the man who brought it. 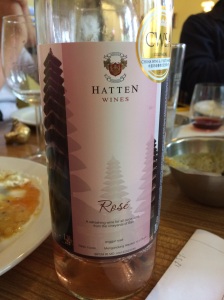 Bolney Cuvée Noir Brut 2010, Sussex This has seen the odd outing before. It’s a genuine crowd pleasing red sparkler, which seems a contradiction in terms. 12.5%, Dornfelder, frothy and fruity. Another wine where thinking outside the box for food matching might not have been the best idea, but a lovely wine in its own right. 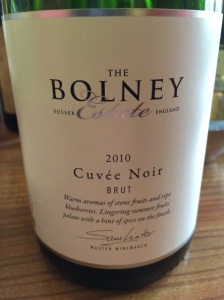 Plavac 2010, Tomic, Croatia It took a long time to get close to identifying this, with guesses of Gamay, and even Rondo and a more westerly location, though Croatia finally got a mention. The grape mix is largely the best known of Croatia’s red varieties, Plavac Mali, along with lesser Plavacs. A fruity wine feeling balanced (13.1%), with a softness and little tannin, nothing to clash too much with the food. Plavac is the child of Zinfandel (in its current guise of  Tribidrag). Softness without high alcohol. 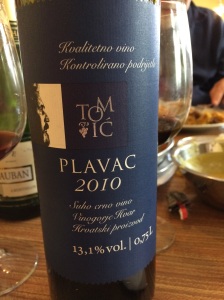 Norton 2010, Augusta Winery, Missouri This one foxed us all, but this hybrid between vinifera and native varieties was not in the slightest bit “foxy”, the problem with many non-vinifera wines from the United States. Guesses from my direction included Virginia, but frankly no one expected Norton from Missouri (although “Norton’s Virginia Seedling” is the grape’s full name). Fruity, smooth, and even tasting a touch sweet…ish, this may not win any prizes for complexity, but it provided a double education. First for the grape, and second as a match for “curry”. The vote wasn’t completely unanimous, but most (including me) had this as the best match for today’s dishes. 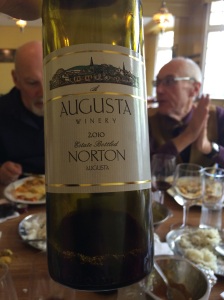 Renski Rizling 2011, Dveri Pax, Slovenia It must be said that since starting these various Oddities lunches I’ve managed to get to drink quite a good number of wines from Croatia and Slovenia, two of the countries seen as offering great potential within Europe. And Dveri Pax is a winery many will already know, a least by name. Based in Stajerska Slovenia/Podravje up near the border with Austria’s Styria region, they make a range of good value varietals (according to Jancis and Hugh’s World Wine Atlas). The wine was light, quite fragrant with a dry delicacy which made me think first of Northwestern Spain (Godello), and then Austrian Gemischter Satz (which, let’s face it, I think of way too often) with a bit of bottle age. This wine was not high in acidity and no one would really guess “proper” Riesling as the variety. Pleasant, light and fragrant, but not challenging for wine of the day. 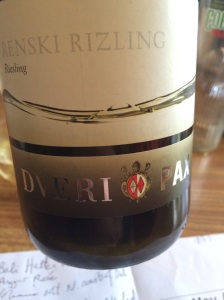 As well as the pleasures of the restaurant, India Club also boasts a bar, equally as old fashioned. The coffee may be made from a kettle, but it’s nice to be able to sit and digest/chat for a while. Thanks Warren for organising and to everyone who provided the wines and entertaining conversation. 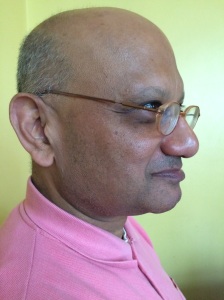 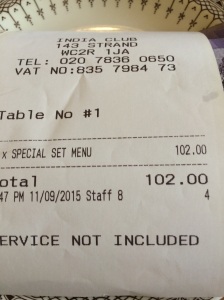 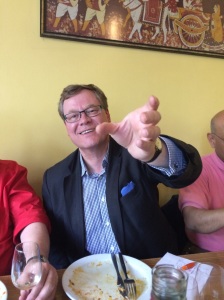 Writing here and elsewhere mainly about the outer reaches of the wine universe and the availability of wonderful, characterful, wines from all over the globe. Very wide interests but a soft spot for Jura, Austria and Champagne, with a general preference for low intervention in vineyard and winery. Other passions include music (equally wide tastes) and travel. Co-organiser of the Oddities wine lunches.
View all posts by dccrossley →
This entry was posted in Wine, Wine Agencies, Wine and Food, Wine Tastings, Wine with Curry and tagged Augusta Winery Missouri, Bolney Estate, Champagne Mont-Hauban, Dry River, Dveri Pax, Hatten Wines Bali, India Club Restaurant, Spice Oddity, Tomic Croatia, Wine and Spice, Wine with Curry. Bookmark the permalink.