A group of us get together for occasional Tuscan lunches, usually based on Sangiovese reds with a few token Tuscan whites. I’m sure you’ve read about them on my Blog. There’s always a theme, but when you’ve run from Chianti Classico Normale to Brunello Riservas, something different is called for. So yesterday’s theme began as “Tuscan grape varieties from outside Tuscany”. As no one managed to find any Greek Vernaccia, nor Slovenian Trebbiano, it was agreed that we’d relax the whites. Someone also brought an Umbrian red grape, but we are not a spiteful bunch.

Lunch was at Popolo, in Rivington Street, close to Old Street Station, London, where Jon Lawson (who spent five years with Theo Randall) is head chef. It was my first visit to this tiny Shoreditch restaurant with an Italian flavour and a hint of Spain. The food was excellent. I started on Piquillo Pepper croquetas (too hungry to remember to photograph them), then lamb’s cheek pasta parcels (for me, the highlight, they were just so good). Then everyone shared bavette steaks and pigeon (not enough pigeon to go round all of us), before finishing with a cheese platter, including a Taleggio of exceptional quality. The service was friendly and we felt a genuine welcome. A great place. 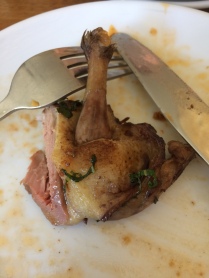 One word on this lunch. You might get the impression from the notes on individual wines below that they were not all of stunning quality, that some were not very exciting, and that one or two were faulty. It is true that, for example, the wines were not of the same consistent quality as those at the last of these Tuscan lunches I went to – at The Glasshouse in Kew. But that would be misleading as to the success of the lunch.

Apart from the very good food at Popolo, and of course the company of good friends, it was the trying of these wines from such diverse sources, and with such diverse flavours, which made this lunch both satisfying and such fun. Exploration is surely as big a part of enjoying wine as a procession of fine vintages, where in fact quality can be drowned by the next wine which is just that tiny bit better.

We began with three whites. Hans Family Vineyards 2013 Marlborough Arneis (Herzog) was very attractive. Richer than the majority of bottles of the Piemontese version perhaps, but it still had a chalky texture with pear and peach stone, accompanying a floral nose. I managed to guess the grape, but went for Australia rather than New Zealand. 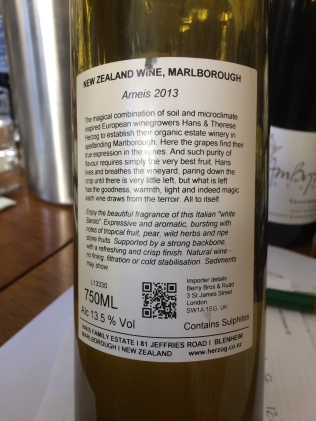 Montevecchio Vermentino 2016, Chalmers, Heathcote, Victoria was a clearskin wine, brought along by one of our friends at OW Loeb. It is a wine under consideration for their keg programme. Montevecchio is a second label of Chalmers, used for more experimental wines. This is a one-off as it was used to season some new botti which are now to be used for Sagrantino, so I understand. Lighter than the Arneis, in fact it hardly tasted like a warm climate wine, yet it does have real flavour. I’d have thought it would do well in keg. Very refreshing.

Timorasso “Fausto” 2012, Marina Coppi, Colli Tortonesi comes from the hills at the southeastern edge of Piemonte, beyond Alessandria and Tortona. Marina dedicates this wine, made from the rare but rather good Timorasso grape, to her grandfather, the great Italian cyclist, Fausto Coppi. It’s lovely, rather richer than the version of Timorasso I know best (Walter Massa, at Monleale), coming in at 14.5% abv. There’s a little skin contact for richness and texture, and it wears the alcohol well, with freshness to balance. It also developed whilst in the glass.

Sangiovese “1492”, 2012, Christobal, Mendoza, Argentina kicked off the reds. It’s a pretty commercial wine, but nevertheless very pleasant. There’s actually a good bit of Sangiovese in the country and I’d say that it has potential if taken seriously. This wine is, unashamedly, a fairly cheap quaffer, but not bad.

“Venustas”, Mark’s Vineyard Lot 1, 2012, Ambyth, Paso Robles was a nice foray into California. It’s actually a blend of Sangiovese and Tempranillo, made biodynamically. The Sangiovese makes up the larger part of the blend (54%), but the wine was quite oaky. We felt that perhaps the Tempranillo had soaked up a lot of oak, making it dominate a little. The 12.4% alcohol should have been seen as refreshingly low, but perhaps there was not enoughbody for the oak. A smooth and rich red, though, even if it was without very much evident Sangiovese character. 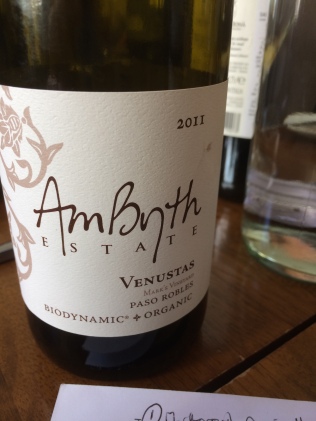 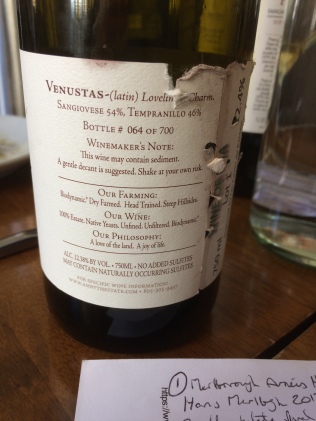 Australia is just starting to get better known outside of wine geek circles for its Italian varietals, though she has been making them for many years. A lot of the work has been done in Victoria (many of you will have come across the Gary Crittenden range), and that’s where we were for our first Aussie, Sangiovese 2014, Dal Zotto, King Valley. This was very true to the variety. Perhaps the higher elevation of the King Valley helps. Not too dark, with a certain lightness, smooth but with a nice lick of acidity. Someone remarked that it was quite like a Chianti Classico, which (having taken this wine) was exactly how I’d hoped it would be received. Red Squirrel have chosen well here, as this is no warm climate Sangiovese with no connection to its roots. Quite lip-smacking. 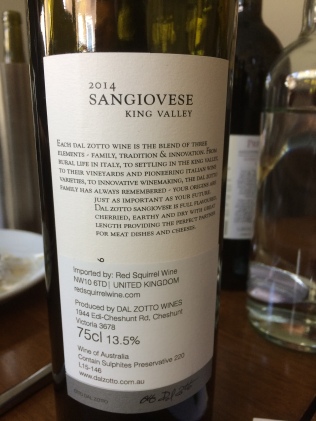 Sangiovese 2013, Payten & Jones, Yarra Valley hails from a producer I’d never come across before. They are based in the Valley’s wine centre, Healesville, and the vines for this wine are in the Yarra sub-region of Gruyere (sic). Payten & Jones are wedded to as little intervention as possible, and they joke on their web site that this wine makes itself, bar a quick look over the top of the newspaper every day. Quite grainy in texture, I got raspberries, and a touch of herbiness, but missed the juniper the producer describes. This was, once more, a decent wine, but it didn’t have the varietal definition of the Dal Zotto.

Grotte di Sole Patrimonio 2012, Antoine Arena, Corsica. Arena is Corsica’s best known producer, and Patrimonio one of its best known wines (up in the north of the island, close to Bastia). Arena make “natural wines”, and in fact they were one of the first few natural wine producers whose wines I tried. In fact they may have been the first whose wines didn’t taste volatile. Niellucciu (also sometimes Niellucio) is the synonym for Sangiovese in Corsica, although modern ampelography casts doubt on whether they are in fact the same variety.

This has masses of acidity and texture on the tongue, and some volatile acidity. It tasted super dry, and our resident Champagne expert suggested it may have undergone a slight second fermentation at some point whilst in bottle. It tasted to him like a fizz-free Sparkling Shiraz! So possibly a faulty bottle?

Back to Italy for the last two dry reds, and to that other bastion of Sangiovese production, Romagna. Romagna Sangiovese Superiore Riserva 2013 “Avi”, San Patrignano is a lovely wine made by a very special community, which gives hope and work to people who are recovering from addiction. They are a large foundation, with around 350 employees and more than 1,300 guests, who pay no fee for their rehabilitation therapy. Wine is but one part of the work experience available. 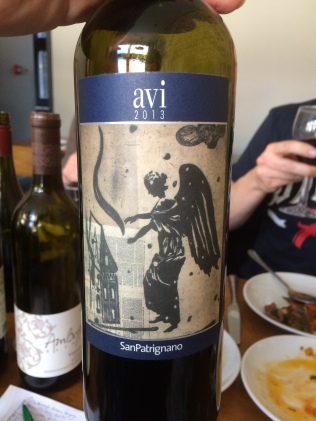 The group of people who attend these lunches often go on an annual trip to Tuscany, and it was on one of these trips that one of them was accosted in a quiet Florentine Piazza and lured to tasting these wines. When a good cause combines with good wine, there’s nothing to lose. The wine is rich, with plummy fruit and spices (nutmeg, cloves), making this a complex Riserva, capable of ageing, but showing its quality now. I found this wine very impressive.

Sangiovese di Romagna Riserva “Pruno” 2009, Drei Donà ought to have been the star of the day. Drei Donà is a well known producer whose Tenuta La Palazza estate lies inland between Ravenna and Rimini, north of San Marino, and close to the town of Forli. “Pruno” is their flagship wine, a single 3.2 hectare site of 100% Sangiovese, which at Riserva level sees 18 months in a mix of 500 litre and 250 litre French oak, plus a year in bottle before release. And we had a 2009 on the table. I was looking forward to this so much, but it was well and truly corked.

We finished off with two sweet wines, which were both, in their own way, off-topic. But they were also delicious, so we didn’t grumble. I guessed the grape variety in the blind red, Sagrantino Appassimento 2013, Chalmers, Heathcote. Another wine from Chalmers. Although Jasper Hill and other estates around Heathcote (inland in the State of Victoria) gained a name for Nebbiolo in the 1990s and 2000s, Chalmers has pioneered Italian varieties there, and has acted as a nursery for many vines planted by others in the region.

This dried grape wine has 13% alcohol, with hints of chocolate and spice, very sweet, but also “like grown up fruit juice” as someone put it. It did actually taste like the sweet Sagrantino wines I’ve tried in Italy, although the alcohol here didn’t appear out of balance, or too heady.

Our final wine was purchased off the list at Popolo, in order to have a second wine with the cheese course. Dominio del Urogallo Flor del Narcea Moscatel, Nicolas Marcos was stunningly good. Marcos was born in Spain’s Toro region, but left to make wine in Asturias. He worked for a while under Alain Graillot (of Crozes-Hermitage fame), whom he credits with changing his life. He believes in minimal intervention winemaking, and in wines which are low in alcohol, and which will partner food.

There is no doubt that this hard to describe Moscatel, complex and sweet but at the same time totally gulpable, is wonderful stuff, even taking into account the propensity to eulogise dessert wines after a (very) heavy alcohol intake over a three-and-a-half-hour lunch. But this really was good, and a producer I’d never tried, having missed him at the RAW WINE Fair in March.

Thanks for the delicious loquat, Ian. This fruit is native to China, but is now grown in Italy and Spain. A large bag of these came from Borough Market, and some were generously distributed after lunch.